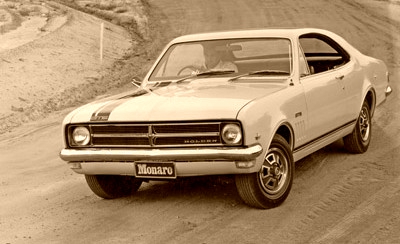 I am actually old enough to have bought a brand-new HK Monaro back in 1968.

It was a metallic-blue 307 cubic-inch automatic GTS complete, of course, with the black GT stripes.

After the sale in 1964 of my Twin-Cam MGA (see story back in December), a was bitten by the coupe bug and fell for the first XM Falcon Futura hardtop to arrive in a dealer showroom in Tasmania.

After four years with the Futura and having moved from Tassie to Melbourne with my young (and still) wife, I clapped eyes for the first time on the most stunning Holden I’d ever seen  — the HK Monaro.

I had to have one.

Preston Motors was a big (and still is) Holden dealer and they happened to have a city dealership and showroom not far from where I worked.

During my lunch hour I walked to the showroom to get close up and personal with the car.

I’ve forgotten what colour the one was that was on show but I didn’t like it.

I spotted a blue GTS through a door and said I’d like to see that one.

The salesman explained that it was the boss’s car and he’d just taken delivery of it.

That was enough for me. I had to have that one.

The XM Futura was traded and the GTS was mine.

I was the happiest kid on any block.

Soon after and seriously sadly for me, I broke my right leg playing football (the AFL type) and spend 11 weeks in plaster, totally unable to drive.

My darling wife did not much like driving in Melbourne. There was rather more traffic than Burnie, Tasmania, but because chauffeuring duties were unexpectedly thrust her way, she quickly rose to the occasion and became an excellent city driver.

By this time 1 was the founding public relations manager of BHP’s Oil and Gas Division, working with Esso to explore for and develop the then new Bass Strait oil and gas reserves.

Once the plaster came off and I could drive again, the Monaro was great for high-speed dashes down to Gippsland  … places like Sale where the processing plant was being built and Barry Beach, on Corner Inlet, where the offshore platforms were constructed.

It will come as no surprise that the American oil men brought to Australia by Esso all drove V8s. What else?

As did I, most of them liked driving fast and in those good old days before amphometers and radar, and we used to report to each other the times it took us to drive from the city to either Sale or Barry Beach.

Today we’d be in the slammer.

There were a couple of things that were horrible about the GTS.

One was its awful two-speed automatic and the other was it brakes.

If you had to do a serious crash stop, the brake fluid would often boil and it was bye-bye pedal pressure.

I well remember several occasions during which I drove back to Melbourne with nothing to stop me but the hand brake.

I always changed the fluid and bled the brakes as soon as I got home.

One other bad design feature was the tach’s position on the centre console.

Having to take your eyes off the road to read it wasn’t good.

Back then I thought the -five-litre V8 had as much grunt as any young fella could wish for.

The fact was that by today’s engine-performance standards, it was a bit of a slug.

Peak power of 156kW and 407Nm or maximum torque sound pretty tame today but in those days I thought it was the bee’s knees.

Speaking of performance, a sprint time to 100km/h of around 10.5 seconds is also extremely ordinary these days – especially for a V8.

I owned the GTS for four years and despite its shortcomings (they are more noticeable in hindsight than they were then), I still loved the car.

Eventually, however, the arrival of a large Old English sheepdog (the one in the Dulux paint ads) and the first of our two daughters, meant it had to go.

As it happened, the father of my secretary back then was a senior Holden executive and he kindly arranged for my next car – an HQ 308 V8 wagon – to be fitted with GTS wheels, dash and grille.

That way, I sort of kept the Monaro memory alive.

CHECKOUT: When the shaggin’ wagon was rockin’