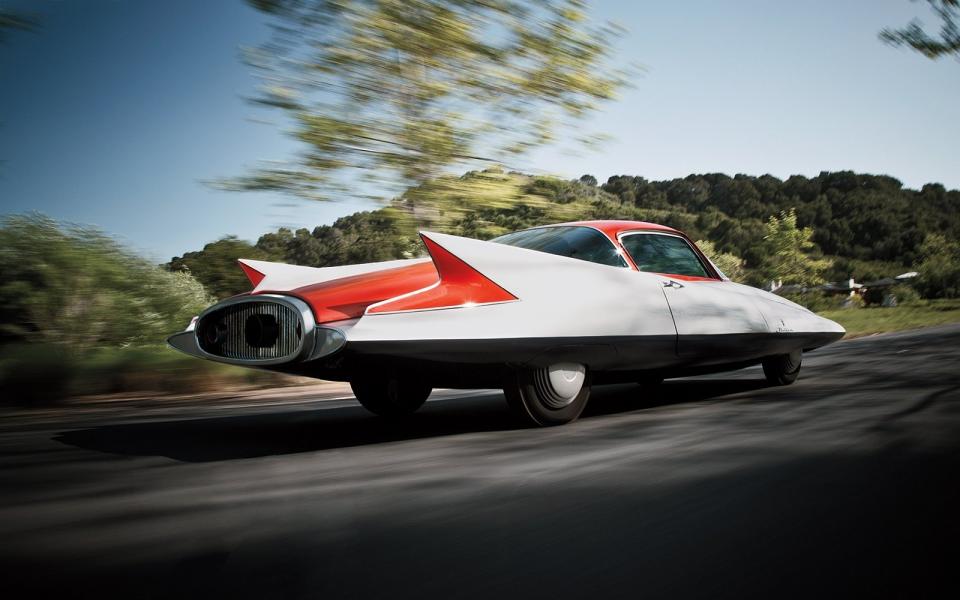 It is 60 years since Chrysler partnered with the renowned Italian styling house, Ghia, to create the dream car called Gilda.

It was inspired by the femme fatale character made famous by Hollywood actress Rita Hayworth in the 1946 film of the same name.

When Chrysler rolled this baby out into the sunlight in 1955 it was supposed to be powered by one of those new fangled gas turbine engines.

But Chrysler’s engineers had not yet perfected the technology, so a four cylinder engine was used to instead.

Chrysler’s head of styling, Virgil Exner wanted to prove that scientific, aerodynamic design was viable in the American market place, so he endowed Gilda with styling that copied jet aircraft and rockets.

Exner asked Ghia to make a one-fifth-scale plasticine model of the “Gilda” and it was taken for wind tunnel testing at the University of Turin.

Exner used this finding two years later to justify his extravagant use of fins on the 1957 Chrysler, Dodge and Plymouth ranges.

The completed “Gilda” debuted at the 1955 Turin Automobile Show, where it was hailed as “shaped by the wind” and caused a sensation with its “experimental body.”

The car went on to tour the European show circuit to great acclaim before it was sent to the USA  for permanent display at, ironically for a Chrysler product, the Henry Ford Museum.

It sold at auction in 2005 when it was purchased by renowned Pebble Beach judge and Mercedes restorer Scott Grundfor.

He had the car fully restored following Ghia’s initial blueprints and inserted a jet engine in the rear.

Gilda was one of the centre piece exhibits at Atlanta’s High Museum of Art last year.