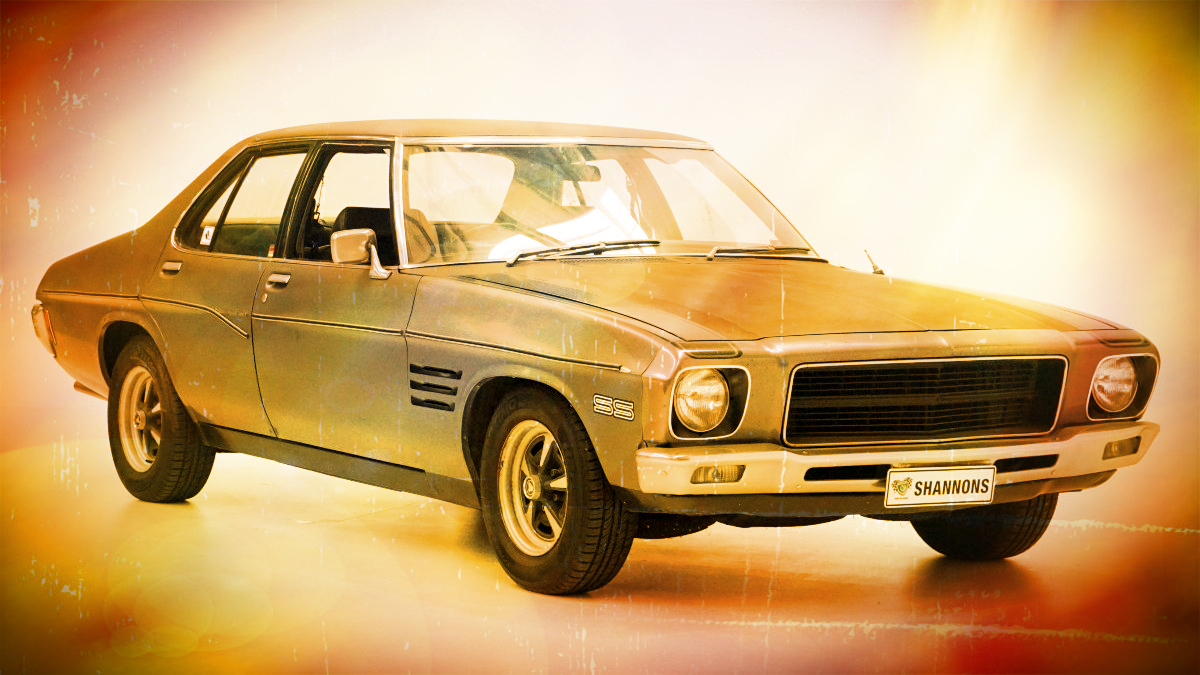 Barn-find Holden first of its kind

Big money is set to change hands at Shannons next auction in a few weeks with some high rollers up for grabs.

Then there’s a 1964 Works Lotus Cortina prepared for the Geoghan brothers that is expected to create international interest and a price of up to $250,000.

But for our money one of the more interesting items will be a barn-find, four-door 1972 HQ SS Holden that could be yours for as little as $50,000.

The Holden SS sedan was released in August, 1972 and although marketed as a separate model, it was in reality a Belmont V8 sedan fitted with the XV2 option pack.

It was the first time Holden employed the SS badge and featured a 4.2-litre, 253ci V8, four-speed transmission and came in Infra Red, Ultra Violet and Lettuce Alone.

The four-door Monaro in comparison was based on the Kingswood V8 sedan.

Located in Melbourne, it is believe it or not — a one owner car driven exclusively by its only owner from the age of 52 to 96, apart from a period of illness.

One of just 373 HQ SS models manufactured, it was delivered September 20, 1972 by dealer Dustings (Burwood, Melbourne) and was regularly maintained by its fastidious owner using only genuine Holden parts.

It is totally original, with matching numbers and showing just under 66,000 miles at the time of cataloguing.

Finished in the very ‘70s shade of Ultra Violet, it has sadly been badly affected by UV.

The upper body paintwork is faded and discoloured in places, and while the lower panels are better, there is also some bubbling to the bottom of the driver’s side doors.

Some of the side trim is coming off too.

Inside, the cabin has fared better, is all factory original and is in generally good condition, though some of the seat stitching is coming apart.

Being an early build SS (retrospectively known as a Series 1) it features iconic houndstooth checked cloth inserts on the black vinyl.

Stored under the carport at the family home, it was started for the first time in four years in March after the installation of a new battery.

With it comes an original Holden wallet containing the owner’s manual and owner’s guide with warranty card.

It is one of just 23 Series 1 Ultra Violet Melbourne-built HQ Holden SSs and is being offered for sale unregistered..

The Ferrari has been well documented. According to the Dino Register, chassis #01390, is an early M-series 246 GT, delivered to Australia in the first month of 1971, making it one of the earliest to arrive here.

Model expert and author of the Dino Compendium, Matthias Bartz, has confirmed the car originally left the factory in the unique colour combination of Verde Pino Metallizzatto (colour code 106-G-30) with contrasting red leather (code VM101) upholstery, a fabulous pairing that must have looked sensational.

The Dino has been the subject of a full body and mechanical restoration, including a rebuild of the 2.4-litre V6, with numerous old photographs available that document various stages of the project.

At the time of writing few details were available on the flour-door 1965 Rolls-Royce Silver Cloud III Flying Spur with coachwork by Mulliner Park Ward.

The name Flying Spur was generally used with the Bentley model (upon which most were built), but it is still correct for a Rolls-Royce version, such as this example.

In fact, the Cloud III is considered to be one of the most reliable Rolls-Royce models ever made.

This fabulous Jaguar E-type is a desirable 4.2 Series 1 with the torquier engine and synchro gearbox.

The Jaguar Daimler Heritage Trust Certificate confirms it was completed on March 3, 1966 as the 501st right-hand drive roadster.

Originally finished in Cream with red leather trim (a special order combination as black trim was normally specified for this paint colour), the E-type was dispatched to Singapore just 11 days later – one of only seven 4.2 Series 1 roadsters sold new there.

The original owner was an Australian engineer stationed in Singapore who returned home to Adelaide soon afterwards, with the Jaguar in tow naturally enough.

The second owner was a Qantas pilot who lived at Whale Beach on Sydney’s Northern Beaches, also kept the car for 21 years.

It was the subject of a complete rebuild in 2009.

After discovering the original hardtop had been separated from the car prior to purchasing it, the current owner had specialist Glenn Olsen design and construct a fibreglass replica with Blackman doing the internal lining – the quality of which surpasses the original.

The ‘works prepared’ 1964 Lotus Cortina Mk 1 was built by Ford’s Competition Department in Boreham, England for Australians ‘Pete’ Geoghegan and his brother Leo to drive for the Sydney-based Total Racing Team.

One of just three genuine factory-built Mk 1 Lotus Cortinas sent to Australia and identical to the one raced in Britain by the late Jim Clark.

The Total car in its distinctive black team livery was campaigned by the Geoghegans for just one season – 1964 – competing at Warwick Farm, Lakeside, Sandown, Mount Panorama and Catalina Park at Katoomba in the Blue Mountains.

However, after it was rolled at Catalina, it ended up in Queensland, where it was repaired, registered and used as a road car, after the Geoghegans turned their attention to the Mustang that made ‘Pete’ Geoghegan a five-time Australian Touring Car champion.

The car has been meticulously restored to the smallest mechanical detail over a 20-year period by Ballina-based Lotus Cortina expert Graham Mein.

CHECKOUT: Saint-Tropez has got nothing on this bus