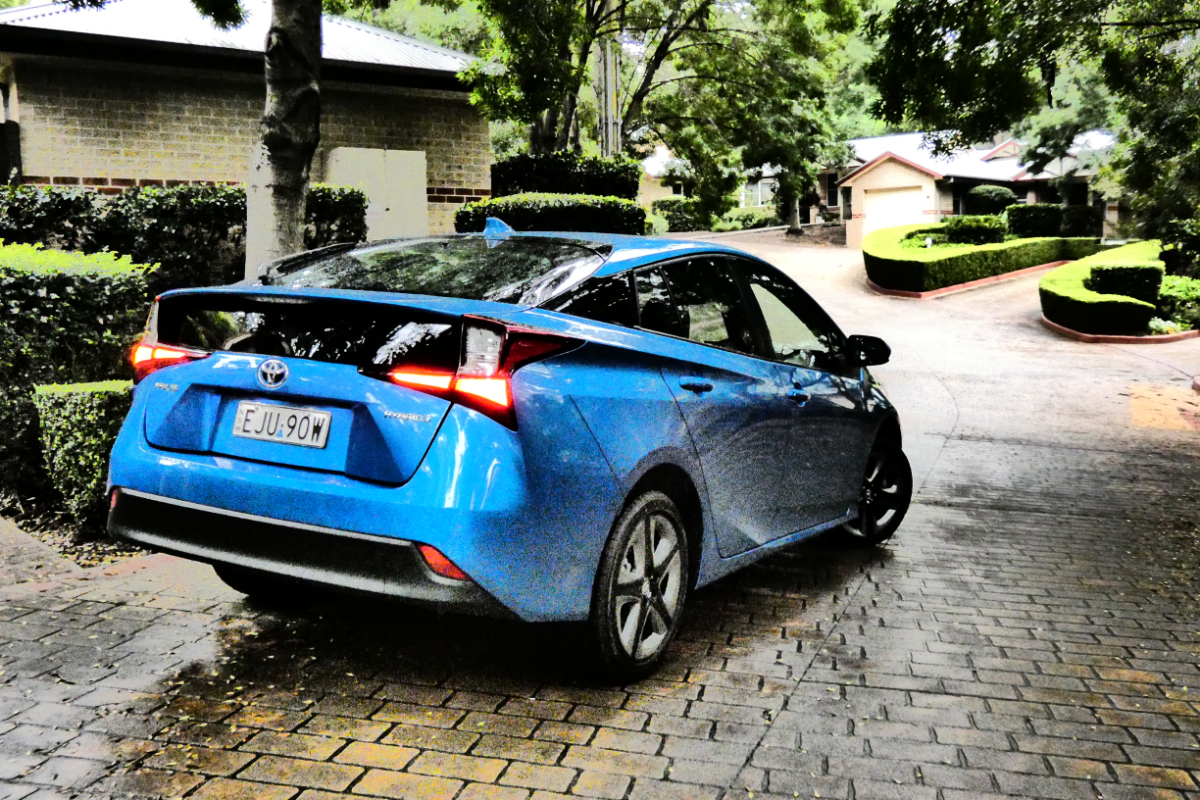 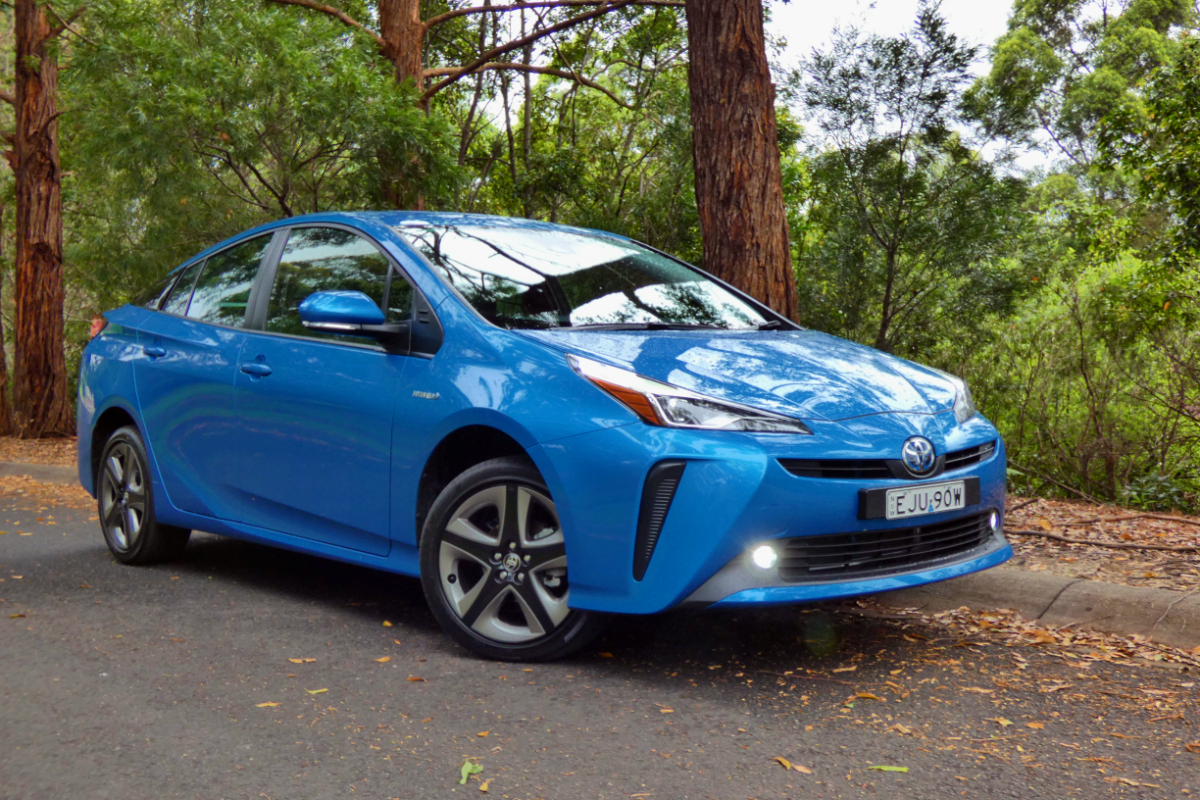 The Prius needs no introduction.

Toyota’s hybrid flag bearer has been pounding the pavement since the turn of the century.

A facelift brought style changes, including new head and tail lights — which in the case of the latter helps reduce the size of its rather prominent derriere. 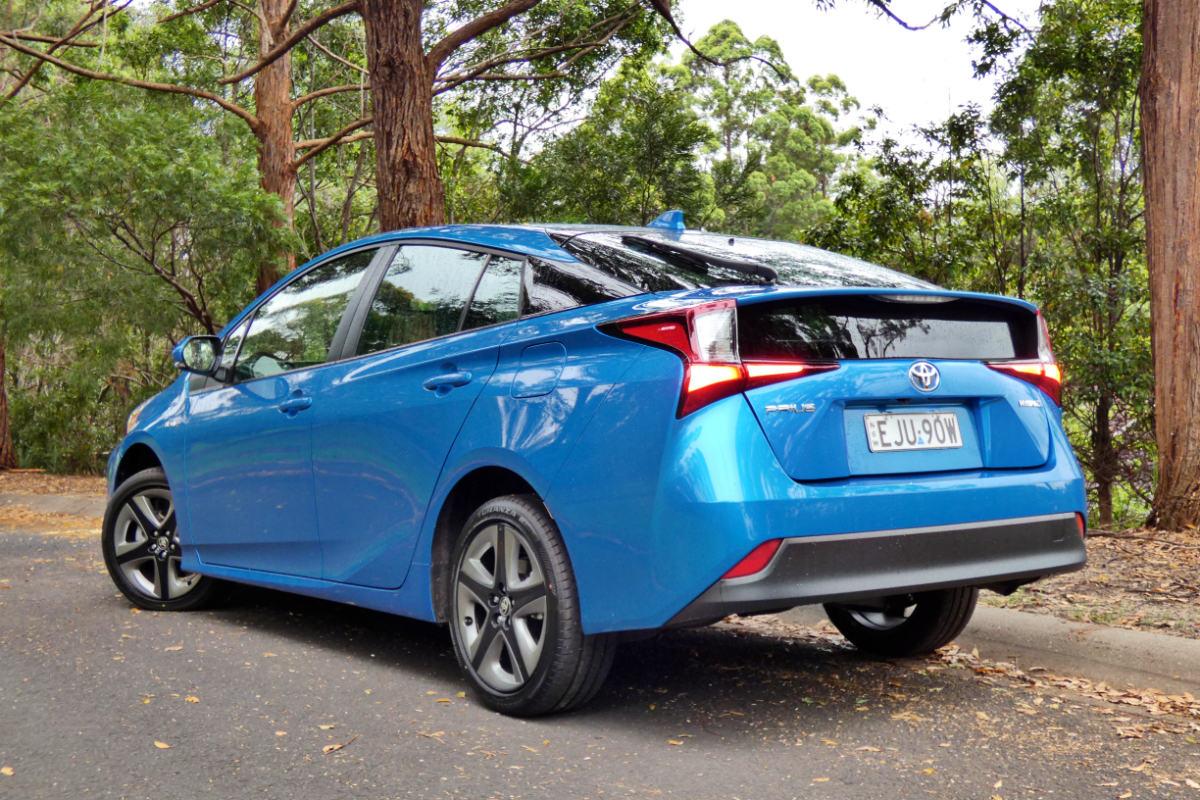 But as a technology focused vehicle, there doesn’t seem to be much point buying the stripper — besides i-Tech will have better resale.

Our test vehicle was in fact the i-Tech, finished in a new metallic called Blue Gem and will set you back just over $50K by the time you put it on the road.

The current model is slightly longer, with sharper styling and in the case of i-Tech rides on 17-inch five-spoke alloys in a new titanium-like paint and black finish.

Inside, you’ll find leather accented seats and single zone climate air, driver instruments mounted in the centre of the dash and a redesigned centre console that now incorporates two cupholders, switches for the heated seats and a wireless phone charging pad.

A 7.0-inch touchscreen now incorporates Apple CarPlay and Android Auto connectivity and can be controlled with pinch, swipe and flick gestures.

Voice recognition now offers a broader range of commands including the ability to set an address while driving and option to search through local points of interest by business name or category.

Other new applications include Siri eyes-free mode for iPhones and Miracast, which can allow compatible smartphone screens to be duplicated on the touchscreen.

Audio is taken care of by a premium 10-speaker JBL system. 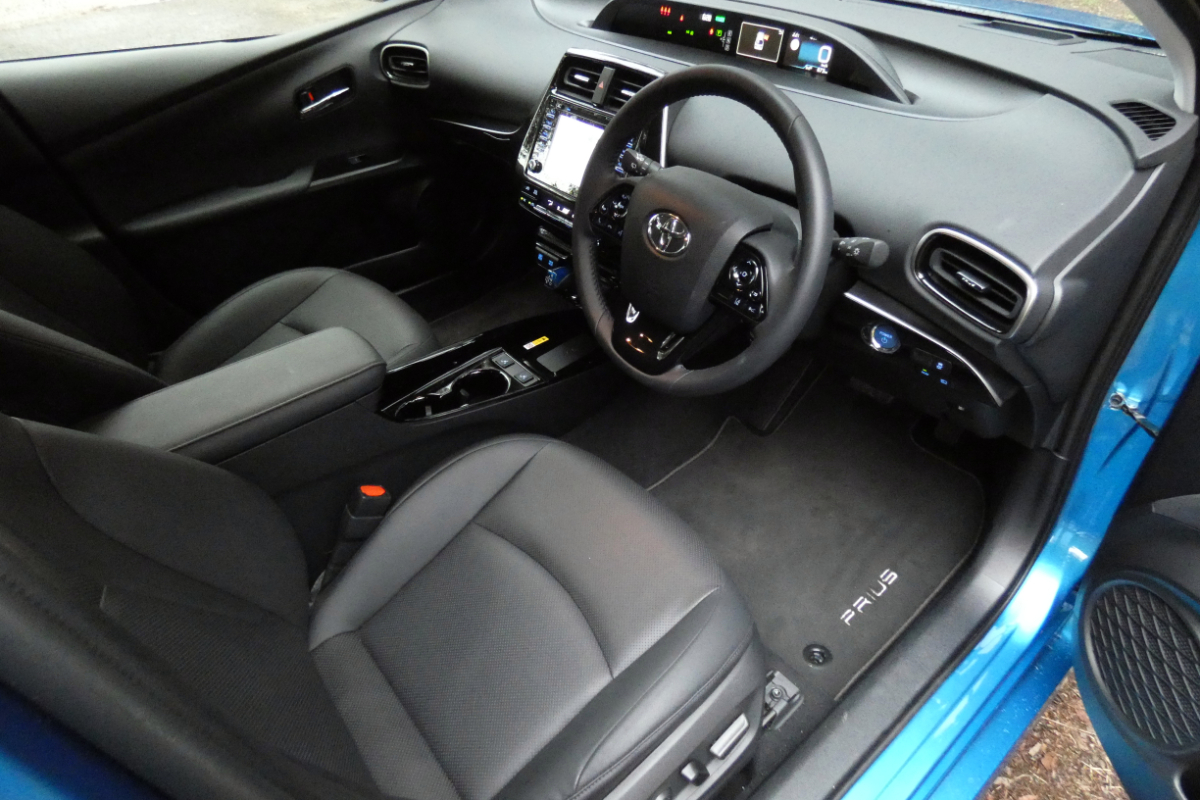 I remember covering the launch of this car when I still worked for the top end of town.

And I recall everyone to a man (and woman) commenting on how much better the Prius was to drive, some even saying it was actually fun.

That’s largely a result of a move to the Toyota New Generation Architecture (TNGA) platform which is more rigid and has a lower centre of gravity, making it more dynamic and comfortable.

The 1.8-litre hybrid powertrain carries over is good for a combined output of 90kW, with claimed fuel consumption of 3.4L/100km and CO2 emissions of 80g/km.

It’s paired with a CVT style auto operated via a small joystick like shifter mounted on the dash just below the touchscreen, rather than in the centre console like most cars.

There’s a choice of Drive or Reverse, plus B for braking that can be engaged when travelling downhill to maximise collection of power for the batteries.

Regenerative braking uses the electric drive motor as a generator, converting kinetic energy to electric energy which can be stored in the battery to assist acceleration later.

There’s no manual mode and therefore no gear change paddles.

Prius is a a vehicle that can be propelled by petrol or electric power — or both.

The electric motor powers the car on start up and up to a speed of 40km/h, and helps to power the car during acceleration — at other times the system is designed to recharge itself.

The petrol engine cuts out when it runs out of power.

Sadly, we still miss out on the plug-in version, or “Prime” as it’s known overseas, which can be charged from a powerpoint.

We do however continue to take the Prius V wagon, while the tiny Prius C hatch has made way for the Yaris Hybrid (it was a Yaris all along anyway).

At the rear, new combination LED lights mirror the shape of the headlights by introducing a more horizontal look to emphasise the car’s width and low centre of gravity.

The car sits quite low to help reduce air turbulence which can make it a little difficult to get in and out of, but once you’re in it’s surprisingly quiet and comfy.

The foot-operated hand brake is still there, rather than electronic one which is common these days.

Rear legroom is okay but there’s no rear air outlets for back seat passengers.

The load area is sizeable but shallow, courtesy of the fact the batteries sit underneath.

Starting Prius is simply a matter of pushing a button which turns on the car rather than starting the engine itself.

There are three driving modes: Normal, Sport and Eco, though most people probably won’t bother with Eco, even though it has been rejigged to make it feel more like normal mode (sorry again, still didn’t use it).

Power mode on the other hand incorporates a learning function and adjusts acceleration and engine braking to match your style of driving.

Generally speaking this Prius is quieter, more responsive and feels more planted with its lower centre of gravity.

But, as most motor noters will agree, what sets this car apart from its predecessors is that it’s actually okay to drive.

It has steering and brake feel, handles moderately well and you can even have a bit of fun with it (as in we managed to get it sideways at one point).

Somewhere along the line however Toyota has lost its Head-Up mojo because the system is now almost invisible to those wearing polarised sunglasses.

Once upon a time the light blue, some might say green system in Toyotas was one of the few systems you could see wearing sunnies in just about any light conditions.

Shame about the CVT, but it’s a necessary evil in the quest for better fuel economy. 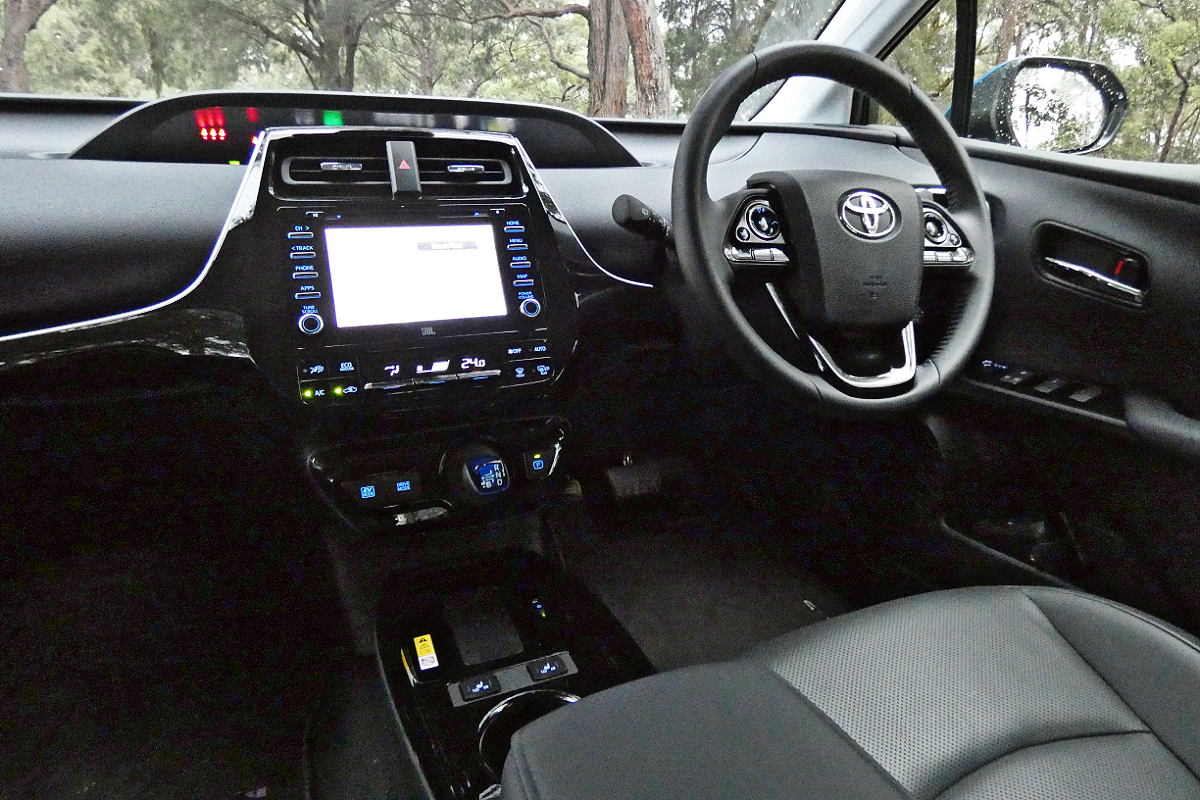 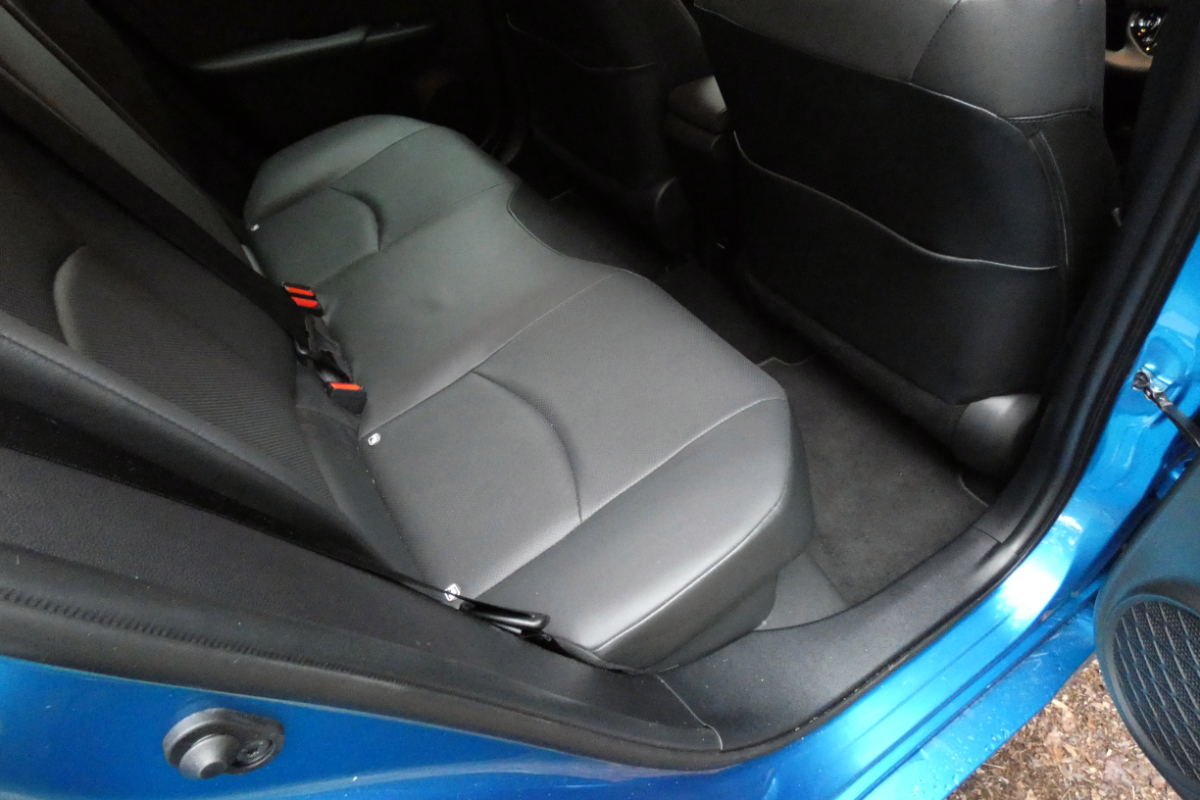 It’s funny. When cars like the Prius were introduced 20 years ago, they were all poo-pooed by us motoring gurus for their lack of performance and driving engagement.

Two decades later we find ourselves coughing into our hands and saying . . . begrudgingly . . . you know what — that’s not bad.

Such it is with the Prius. It’s not perfect, but it’s getting there. More importantly, it delivers the results and is accessible to the population at large in terms of price. 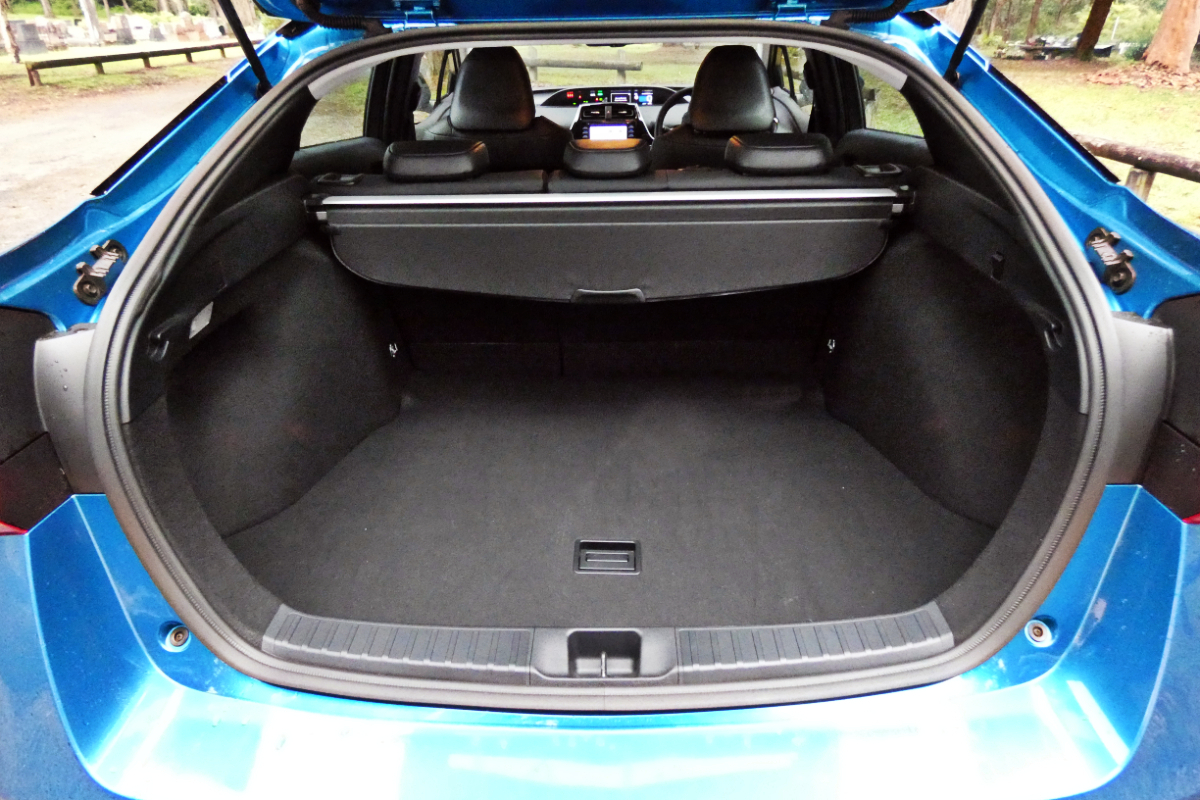 CHECKOUT: Toyota 86 GTS: Where to from here?

Check out deals on the Toyota Prius