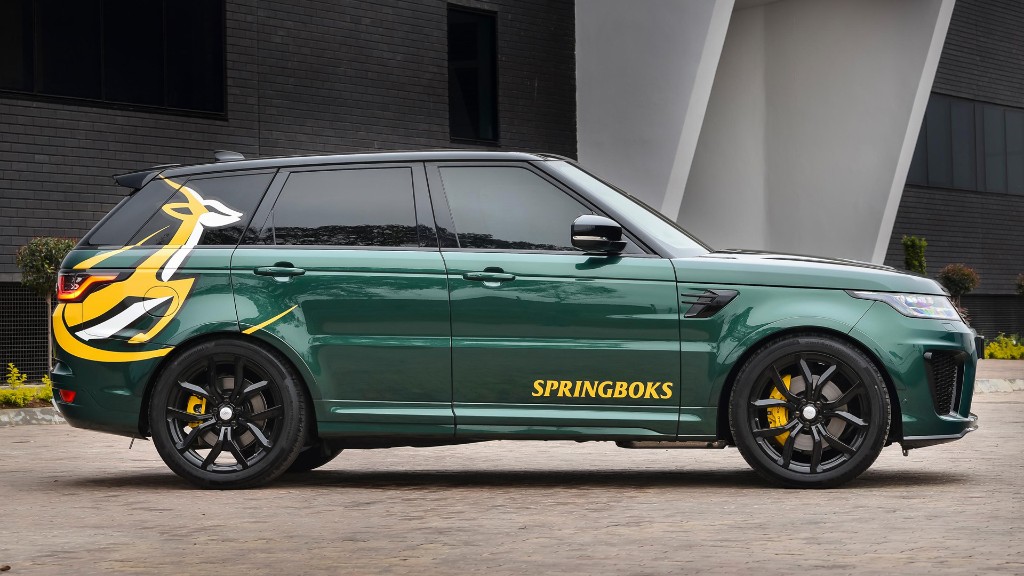 That’s what you get for thinking outside the Boks

I COULD not have been more inconspicuous had I walked down the road with a chicken on my head.

And even in Eco mode, the bright green Range Rover Sport SVR, adorned with Springbok logos, had heads turning, people giving me the thumbs up — and I suspect one or two members of the public hoping to get an autograph when I stepped out. Sorry.

A brilliant idea mind you, what with the Rugby World Cup that’s on the go currently.

The special one of a kind edition is a collaboration between Land Rover South Africa, the Land Rover people at Special Vehicle Operations in the UK and the South African Rugby Union, the organisation in charge of the Boks and custodians of the brand.

Land Rover also happen to be a world wide partner of RWC 2019 as well as the Springboks.

They also feature on the Stormers’ and Western Province clothing, but let’s not hold that against them.

The paint job was applied to the bare shell, so it’s not a wrap and areas like the circular plaques on the B-pillars and front and rear treadplates also feature Springbok insignias and script.

No shrinking violet yellow brake callipers peer out from behind the large black 22 inch rims.

The guys at SVO did their bit on the inside too, albeit a little more subtle with yellow shift paddles and yellow stitching on the seats, while the interior mood lighting has been adapted to radiate a green glow.

So what do you do when you get handed the keys to this unique car?

Jump behind the wheel and head to Loftus Versfeld, where the Boks have seen some epic matches over the years — for an impromptu photo session.

Security had no issues when I asked to go in while a group of youngsters were training, but once they heard the rumble and saw the livery, that was the end of that. Sorry, coach.

Selfies, videos of the exhaust rumble and hashtags were shared as they admired the Rangey.

Underneath all the attention-getting exterior beats the heart of a Range Rover Sport SVR, one of the fastest and meanest sounding SUVs on the market.

Up front a big supercharged 5.0-litre V8 lump pushes out 423kW and 700Nm of torque via an 8-speed gearbox connected to all four wheels and it will get to 100km/h in under five seconds.

Driving this piece of engineering is a bit like the Mercedes-Benz G63 AMG, it has all sorts of settings but the only one you want is the sport switch which tightens up everything and produces a mighty thunder from the enhanced two-stage active exhaust with electronically controlled valves.

So if the exterior didn’t attract people’s attention, the roar down Madiba Street reverberating off the buildings, and the snap crackle and pop as you gear down, certainly will.

And as loud and brash as it looks from the outside, the interior is every bit as plush as you could imagine, green mood lighting aside.

Body hugging heated performance seats covered in Windsor leather, touchscreen infotainment system and centre console complimented with a brushed aluminium and carbon fibre steering wheel make you understand why the royal family have one parked in the garage.

It’s immensely capable too as an offroader, as I found out during a recent outing at the Land Rover offroad experience in Jo’burg with settings for mud, rock, sand and snow.

But this particular model is special, not just because of the livery but simply because it carries the weight of a nation.

I have spent much of my working career involved with sport in some way or another and rugby formed a large part of it.

I was in the stand when Madiba was at Ellis Park and in Australia when we fluffed it badly and have seen first hand what that little leaping buck can do to our psyche.

Here’s hoping that Bok skipper Sia Kolisi can bring home the William Webb Ellis Trophy and that we’ll see that green Range Rover Sport SVR as part of the celebratory parade in all its exhaust growling glory.

CHECKOUT: Velar takes your breath away