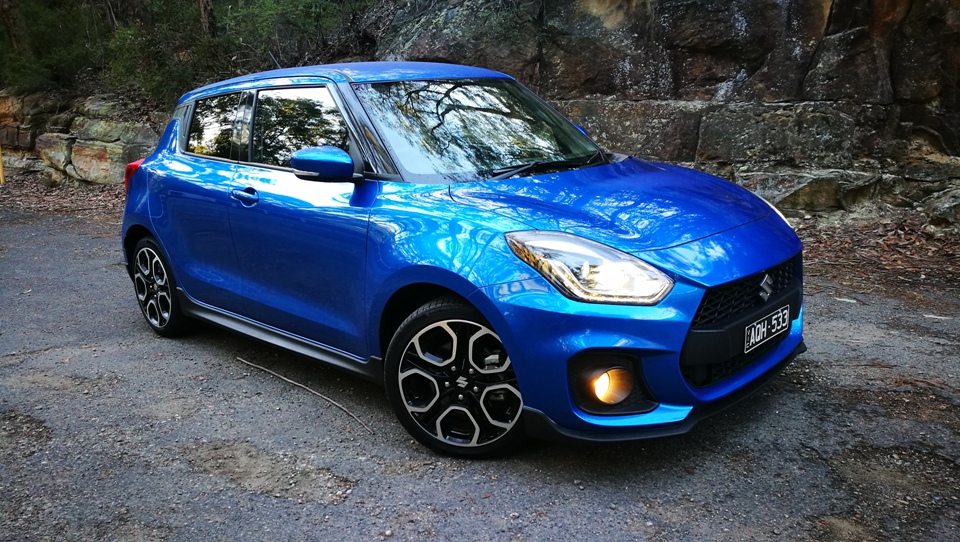 Suzuki pulls a ‘Swifty’ on rivals

The 2018 Suzuki Swift Sport has, for the first time, a turbo engine and an automatic gearbox. It’s also been given a freshen up to bring it into line with “lesser” brethren.

There’s a carbon fibre look to the side skirts and rear valance, a redesigned rear door and relocated door handle, and a reprofiled front compared to the standard Swift.

Suzuki’s fabulous BoosterJet 1.4L turbo petrol engine is what makes the Swift Sport stand out from the competition.

The auto is what makes the difference between the two. That might sound like it’s stating the bleeding obvious, Sybil, but it’s the first time the Sport has been offered with a self shifter and it’s a cracker.

Economy is also in the good books. Suzuki says it’s the same for both at 6.1L/100 km from the fuel thimble. Yes, thimble. You can’t call a 37L receptacle a tank.

Kerb weight is also a plus, with a quoted 970kg for the manual, and 990kg for the auto. Somehow Suzuki have managed to pare off something like 80kg from the previous model. That’s pretty impressive given the new Sport is almost identical in size to the previous version. 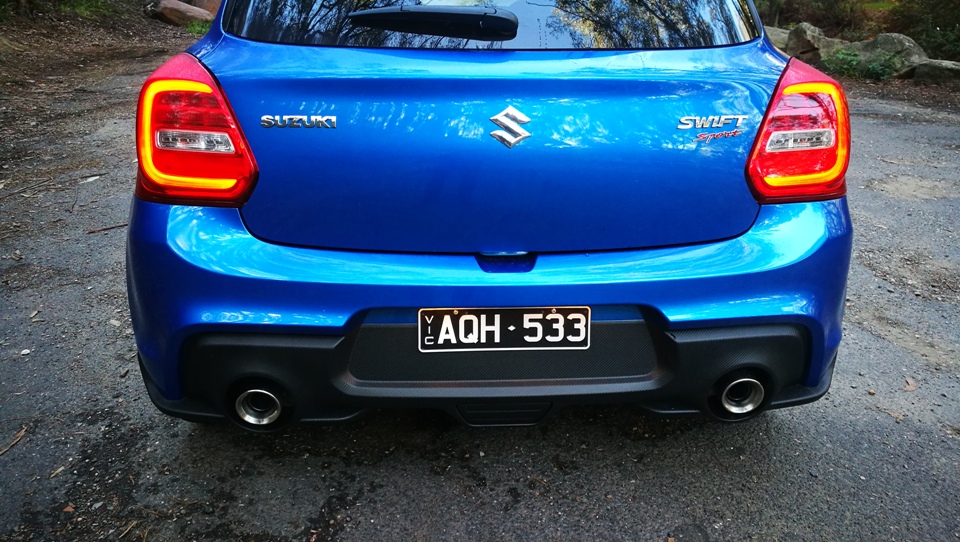 The recommended retail price for the manual is $25,490 plus on-roads, and a market typical $2K extra for the auto. That’s cheaper than the Polo GTi and Clio RS 200.

Suzuki’s engineering and design teams are clearly fans of Doctor Who. Although it’s a mere 3890mm long, 1735mm wide, and just 1495mm high, there’s more room inside than those dimensions suggest.

Shoulder and leg room for adults up front in the superbly sculpted sports seats, which sit higher than expected, are more than adequate. Rear seat leg room with the fronts pushed back is tolerable for a near teenager. Bigger kids and adults may want to fold their legs underneath them, however.

The only small part, aside from the physically small engine, is the cargo area. It’s just 265L with the rear seats up, meaning a weekly shop for a family of four needs the seats down to access a more useful 579L.

There’s a reasonable amount of standard safety equipment. Six airbags, but it misses out on a driver’s kneebag. Hill Hold Control for the auto but, stupidly, not for the manual. Unless Suzuki is suggesting that manual drivers should know how to ride the clutch and brake?

Android Auto and Apple CarPlay are onboard, as is Voice Activation and Bluetooth streaming.

Sensibly, Suzuki has located the Start/Stop button where it can be seen — unlike just about everyone else.

The dash dials are a dark, faded, copper hue. They are beautiful to look at, easy to read, and glow a devil’s red at night. The theme continues with the aircon that has an updated look, yet is unbelievably simple to use. Fan speed on one side, temperature on the other, four tabs for the ancillary controls, and barely a need to strain the brain. 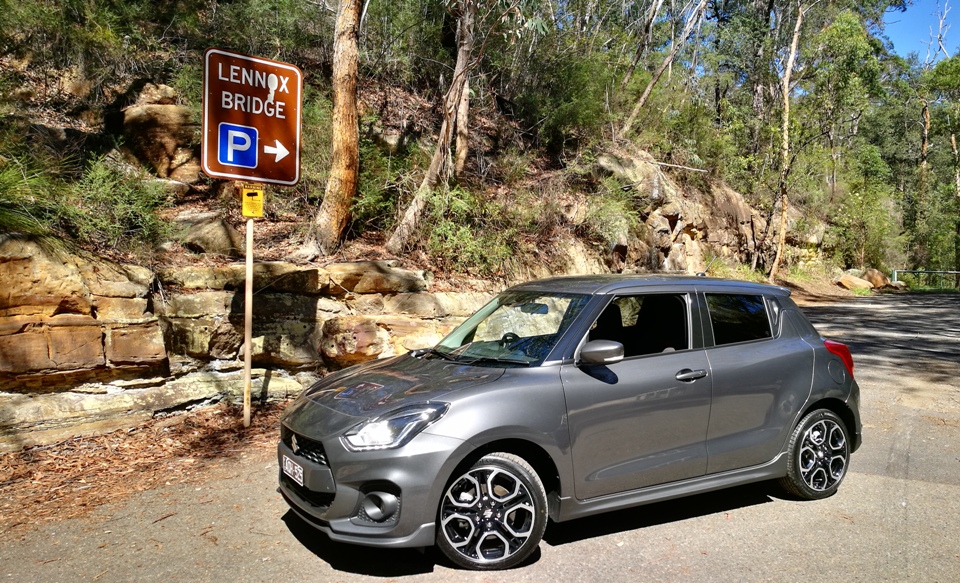 I learned to drive a manual. I spent a lot of time in my late Dad’s ex-work vehicle, a Toyota Hiace. Transmission was a four-speed manual, mounted on the column.

There’s a definite preference in my blood for a manual. May the motoring underlords damn me to hell, but I’d pick the auto in the Swift Sport. Quick hook up, super quick and slick gear changes. Manual changing is via the paddles only.

The manual’s clutch was too light, the gear selector mechanism too loose and rubbery. Pickup in changes just wasn’t consistent enough. The auto is a clear winner.

Where both equaled each other was in economy, at 6.0L/100km in the auto and 5.9L/100km in the manual, in mostly suburban driving.

Punch the auto’s go pedal and braaap braaap braaap was the response. There’s a distinct feeling that the engine and transmission are almost reading your thoughts, and working hand in hand with them.

The manual lacked poise and responsiveness in comparison. There was even more chance of having the fronts spin from a heavy foot in the auto than the manual, bringing back some old time, politically incorrect (yay!!!) fun.

The manual, once its vagaries are understood, does row the Swift Sport along well enough. Unhurried, it slots into the next cog easily and instinctively, but rush and the indecision raises its head again.

Ride quality was harder in the auto, oddly, and the steering felt heavier. But by no means did the steering feel a letdown in either. Think a direction and turn the wheel. The Sport went where it was told.

What the manual’s ride quality would bump crash over, the auto would bump crash — f##k that was harder than I thought. Given the suspension is identical with McPherson struts and a torsion beam rear, with coil springs all around, perhaps the spring rates were different in the self shifter.

The brakes are superb. A bare brush of the alloy pedals had hints of retardation. Go heavier on the brake and the Sport would haul up as far as it felt the pedal go down. Sensational. Confident. Inspirational. 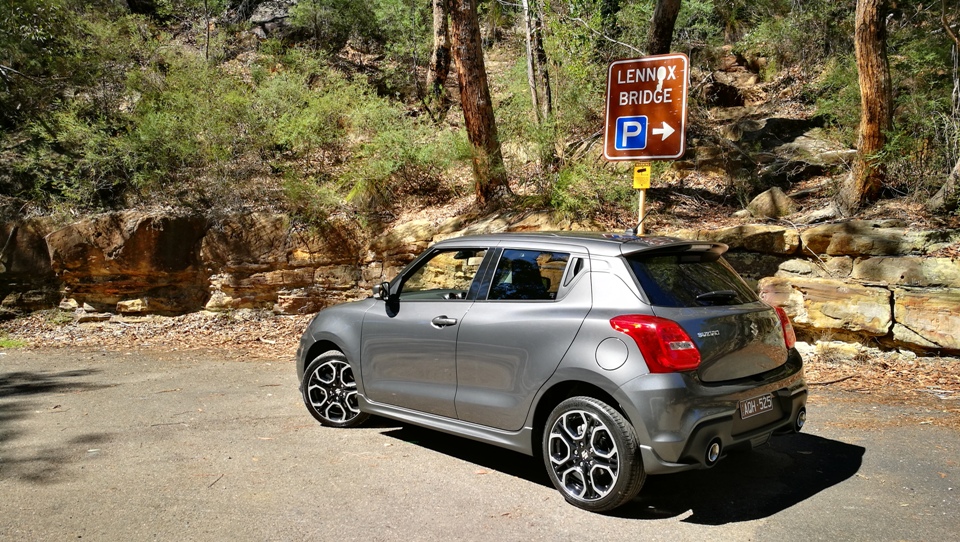 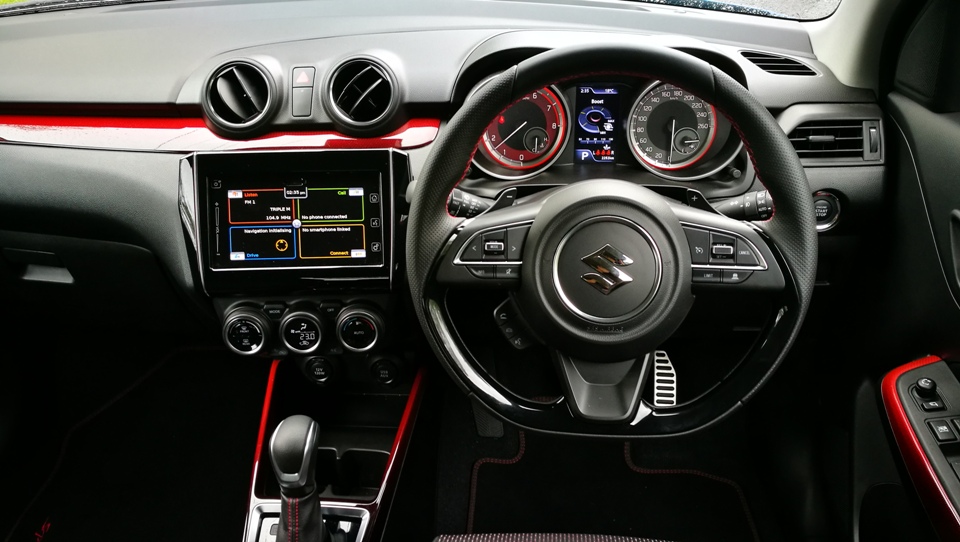 Suzuki’s 2018 Swift Sport reignites the fire of a more than warm small hatch. Roomy enough for four, a brilliant and responsive engine, a cracker auto, and looks that say “I dare ya” — it’s a winner.