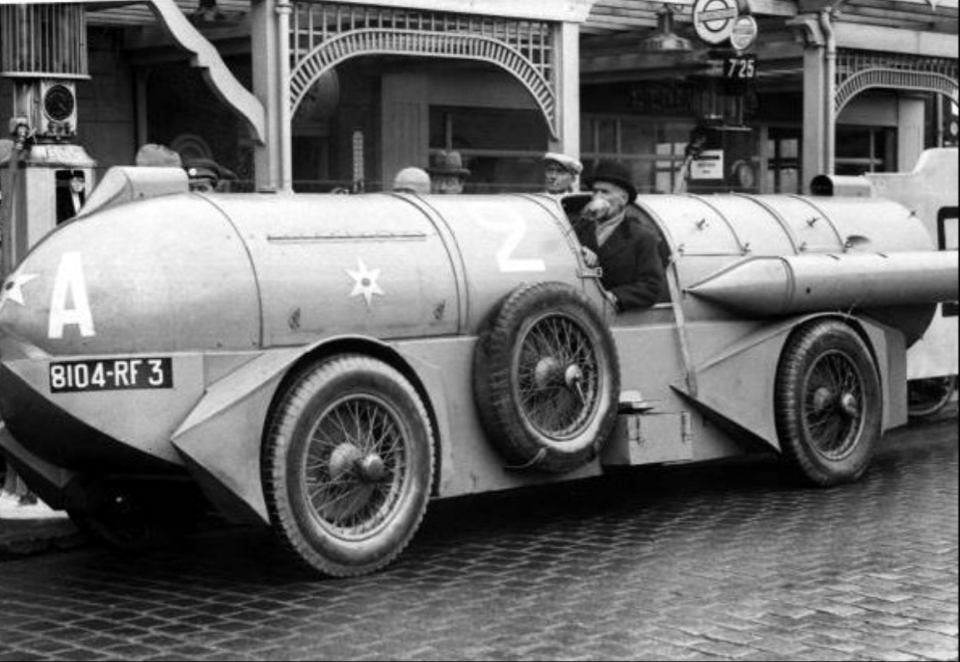 Stapp did a runner after failed record attempt

It was set by former RAF pilot Andy Green in the twin turbofan jet-powered ThrustSSC,  at Black Rock Desert, Nevada, back in 1997.

In doing so Green also became the first person to break the sound barrier in a a land-bound vehicle.

So it seems that now, 25 years later, there’s no longer much interest in the record, but until then it was a big international talking point, especially so in the late 1920s and early 1930s.

In 1929, Sir Henry Segrave, US-born but Eton-educated, and a British national, held the honour of being the fastest man on four wheels.

That did not sit too well with Rene Stapp, a Frenchman described as a racing driver and engineer.

His name does not feature in French racing history, but it matters not.

The proud Frenchman decided to build a car better and faster than the Golden Arrow, and after two years of secret development, produced his Stapp Jupiter.

It was a sight to behold and looking much like a streamlined military machine, it had a large cylindrical body and a vast tail fin.

Stapp revealed it had a trio of 29-litre Bristol Jupiter radial aero engines, from which he had removed the pistons and converted them to what he described as ‘internal combustion turbines.’

Pardon? Oui, that’s what he said.

The body was mounted on the chassis of a Voisin, a prestigious French luxury car of the time, and he retained the Voisin’s big-six engine for use as a starter motor for the modified aero engines, which he said, would each produce 600kW and the power would go to all four wheels via an electric transmission.

He figured the car would reach 600km/h or 372mph when he took it to the sands of Daytona Beach, Florida.

However, first he wanted to do a trial run on a beach at La Baule in Brittany.

So his car acquired a registration plate, rear view mirror and a side-mounted spare wheel so he could drive it though the streets of Paris to give the public a look.

That drive raised many a French eyebrow, for the car  had no windscreen and mechanic and driver had no seats: it was standing room only and Rene had to see the path ahead from a hatch in the bodywork.

There were rocket-like pods on either side and multiple exhaust outlets in the car’s conical tail.

It reached Brittany, but burst into flames, apparently on its first run along the beach.

Rene and le mechanic jumped out (or off) and sustained slight injuries, but the Stapp Jupiter rapidly became a pile of molten metal.

Oddly, nobody ever claimed to have seen or heard the magic internal combustion turbines it was supposed to have.

But the body alone was clearly the product of a lot of effort, however misguided it might have been.

So was it a tragic loss of a noble ‘vive le France’ effort, or the work of a nutcase?

Nobody knows, and Rene Stapp was never heard of again.

CHECKOUT: The Beatles, then Bluebird then disaster struck