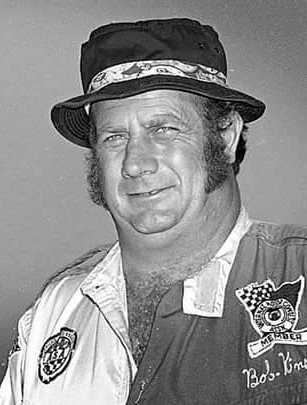 He began racing jalopies at Bloomington Speedway, in 1952.

He was quick and won often.

Bob moved up to race the more powerful super modifieds and then in the mid-60s switched to the lethal V8 sprint cars, campaigning throughout the Midwest on dirt and pavement tracks at a time when roll cages were optional.

During the 1970s and 1980s he invariably finished a main event in the top three.

Bob’s last race was aboard Gil Sonner’s Casey’s General Stores No. 47 in the 1996 Goodyear Masters Classic at Knoxville. He was then 65.

He won 29 track and series championships and more than 400 main events during a racing career that spanned 44 years.

That’s a mighty impressive win-rate for a weekend racer whose 9 to 5 job was in construction.

Such was his reputation that Bob was inducted into the American National Sprint Car Hall of Fame in 1999.

His sons Steve and Randy and grandson, Kraig, all became successful sprint car drivers and Steve has joined his father in the National Sprint Car Hall of Fame.

Steve is the 20 times World of Outlaws champion and Randy has over 200 main event wins to his credit.

Randy and Steve raced in Australia on many occasions in the 1980s winning an incredible 75 per cent of the races they entered.

Bob would accompany them as one of the pit crew.

On one memorable night in January 1987 at Liverpool Speedway he strapped into Barry Lewis’ sprint car and raced in the Castrol Sprint Car Grand National, alongside his sons.

It was a rare and special occasion when all of the Kinser clan raced together.

Randy won the big money event and Bob was so happy about it you’d think he’d won the thing himself.

A big, barrel-chested and gruff-sounding guy, Bob was really a kind soul.

No matter what he was doing he always had time to sign an autograph or just shoot the breeze with race fans.

He was also a great story teller, especially at post-race BBQs.

With his trademark cigar in one hand and a beer in the other, he would keep us all spellbound with stories about his days on the road as a race car driver.

He knew all the big names, and not so famous names, in American oval track racing and they all knew him.