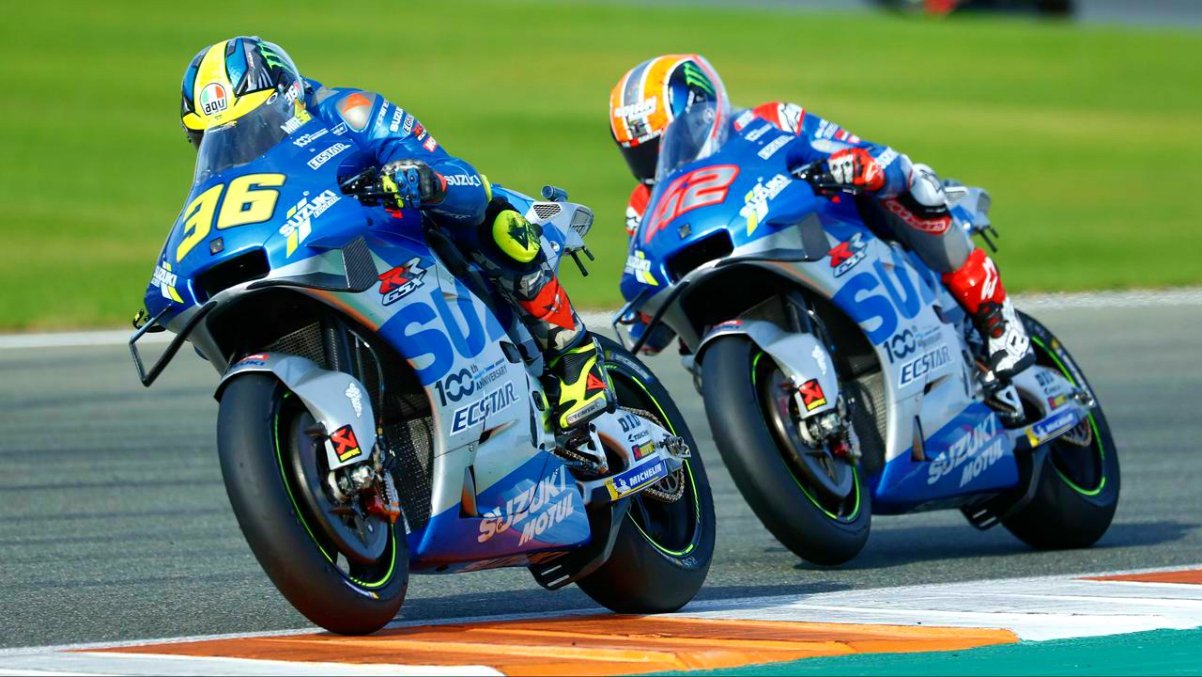 SPANISH star Joan Mir took his first win in Sunday’s MotoGP in Valencia to become the ninth different winner of the 2020 season.

The Suzuki rider and teammate Alex Rins dominated the 24 laps of the 4.0km Ricardo Tormo circuit where the European MotoGP round was run, after taking the lead from KTM-mounted polesitter Pol Espargaro early in the incident-strewn race.

Mir’s victory gives him a sizeable lead in the championship thanks to consistent podium places in earlier rounds this year.

The 23-year-old only needs a podium finish at either of the final two rounds to secure the title.

While it was great day for Suzuki and the first Suzuki 1-2 finish since 1982, it was a horror one for Yamaha.

Fabio Quartararo elegantly slid off his Yamaha in unison with Aleix Espargaro (Aprilia) — but without contact — on the opening lap.

Next, Valentino Rossi stopped his Yamaha on the track with mechanical bothers and fellow Yamaha rider Franco Morbidelli dropped down the order to finish 11th.

Both managed to get back on their machines and Quartararo finished 14th, but Espargaro retired.

Alex Marquez came off his Honda while battling Ducati’s Andrea Dovisioso and Brad Binder (KTM) in the closing laps.

Others not to make it to the finish included Lorenzo Savadori, Tito Rabat and Francesco Bagnaia, Cal Crutchlow (Tech 3 Yamaha) and Aleix Espargaro (Aprilia).

Close behind Mir and Rins was Pol Espargaro, with Takaaki Nakagami fourth for Honda.

In fifth was Portugal’s Miguel Oliveira on a KTM with Australia’s Jack Miller sixth on his Ducati while South Africa’s Brad Binder claimed seventh for KTM.

Binder put in a strong run in the closing laps, overcoming a ‘long lap’ penalty for causing the crash with Miller at Aragon a fortnight ago.

He picked off Bradl, Morbidelli, Pertrucci, Zarco and Dovisioso in the final laps, posting the fastest lap in the process.

He also regained a points advantage in the battle for Rookie of the Year after Alex Marquez crashed out on his Honda.

A long lap requires the rider to follow a prescribed route for one lap that is longer than a regular lap and takes about an extra three seconds to complete.

Next MotoGP is on the same circuit on November 15 and the finale will be in Portugal on November 22.