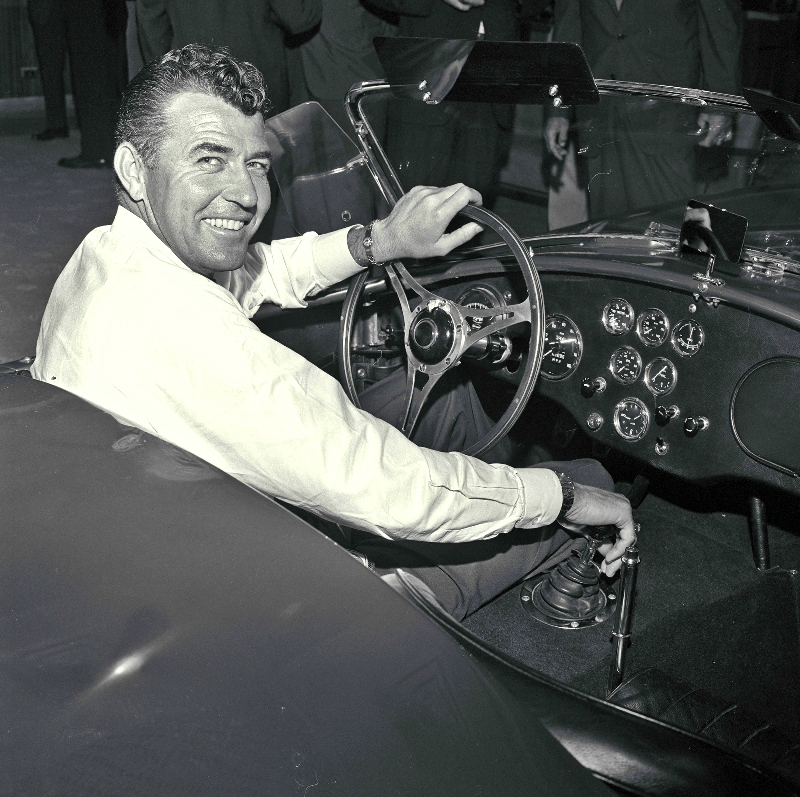 When Ford wanted to build a Ferrari rival for Le Mans in the Sixties, it turned to motor racing legend Carroll Shelby.

Their story is brought to life in the current Hollywood blockbuster Ford v Ferrari which stars Matt Damon and Chistian Bale.

From Texas he came, like a hired gun. In the 1950s Carroll Shelby had built a formidable reputation as a race car driver in the USA and in Europe, particularly in sports cars.

He won at Le Mans in 1959 and his prowess meant he was in demand from the likes of Donald Healey and the Aston Martin works team.

In August 1957 Sports Illustrated magazine named him ‘Driver of the Year’ and a few months later Shelby, driving a V8 Maserati, won a 100-mile race at Riverside, after having been a lap behind at the start thanks to a spin-out.

When a heart condition caused him to retire from active competition in 1960 he set his sights on building sports cars.

The opportunity came when he discovered the AC company in the UK was in need of new supplier of engines and was considering a Ford V8 or Zephyr 2.6-litre six for its sports car.

Shelby airmailed AC with a letter of proposal suggesting the chassis be altered to accept a simple OHV American V8.

AC liked the idea so Shelby went to GM and Ford asking for help.

GM said “no”. They already had the Corvette.

Over at Ford there was a more welcoming reception.

They could see a car with potential to compete with the Corvette in road racing duels and they just happened to have a brand new small-block V8 which could be used.

It was the 260 cubic inch engine destined for the new Fairlane and Falcon Sprint.

And soon it was to be expanded to the magic numbers “289”.

Things moved quickly after that.

In January 1962 the UK mechanics at AC Cars fitted a bare chassis with a V8 to see if it would all work.

Satisfied that the idea was feasible they air freighted the car, less motor and gearbox, to Shelby in Los Angeles.

And here the story attains its mystical status.

Without a workshop of his own Shelby went to see his old friend Dean Moon, asking if he could use a part of Dean’s workshop to assemble the Cobra.

Moon, already a hot-rodding legend on the salt flats and in drag racing, readily agreed.

Once it was unloaded off the plane, Shelby towed the AC to the Moon Speed Equipment workshop on Norwalk Boulevard in Santa Fe Springs, just south east of Los Angeles Airport.

Inside of eight hours Dean, Carroll and the Moon crew inserted the Ford V8 into the AC, cut larger openings for the bigger wheels and shod them with some ‘humper’ style tyres.

As soon as it was finished they went hunting for Stingrays — of the four wheel variety.

Shelby named the car “Cobra”, which he said came to him in a dream.

And a legend was created that still has impact today: 0-60 in 3.9 seconds.

The first 75 Cobras (including the prototype) were fitted with the 260 engine.

After that the ACs were fitted with the larger Windsor 289 incher.

When the big 427 was released in 1963 Shelby shoehorned it into the Cobra too.

“It’s a massive motor in a tiny, lightweight car.” he is quoted as saying when asked to describe the reason for the success of the Cobra.

In March 1962 Shelby moved to his own workshop on Princeton Drive in Venice, Los Angeles, and named his company Shelby American, Inc

The motoring press loved the Cobra, with each magazine striving to add new superlatives.

What they did not know was that in the very early production stages Shelby only had one working car.

To give the impression of many cars he repainted that same car in different colours before each magazine journalist took it out to test drive.

After the Cobras threw off early production weakness they went on to dominate road racing in the USA and Europe.

From this point onward, Shelby’s fame and global influence expanded at an exponential rate.

Carroll was invited by Ford to be part of the Lotus Ford team’s invasion and conquering of the Indianapolis 500.

He was instrumental in Ford’s momentous wins at Le Mans, first with the AC Cobra in the GT class and then with the awesome GT40s — as portrayed in the movie Ford v Ferrari.

In late 1964, Ford asked Shelby to put some more muscle into the new Mustang fastback and the GT350 and GT500 street and track legends were born.

In Australia the Cobra name and livery adorned the last XC Falcon hardtops.

In a world now full of corporatised performance brands, like HSV, Ralliart, AMG , Nismo and so on — the name SHELBY sits at the top of the pyramid.

When it all comes down to it, it is easy to summarise why Mr Shelby was so successful.

He said it himself a long time ago. “Shelby Means Performance”.