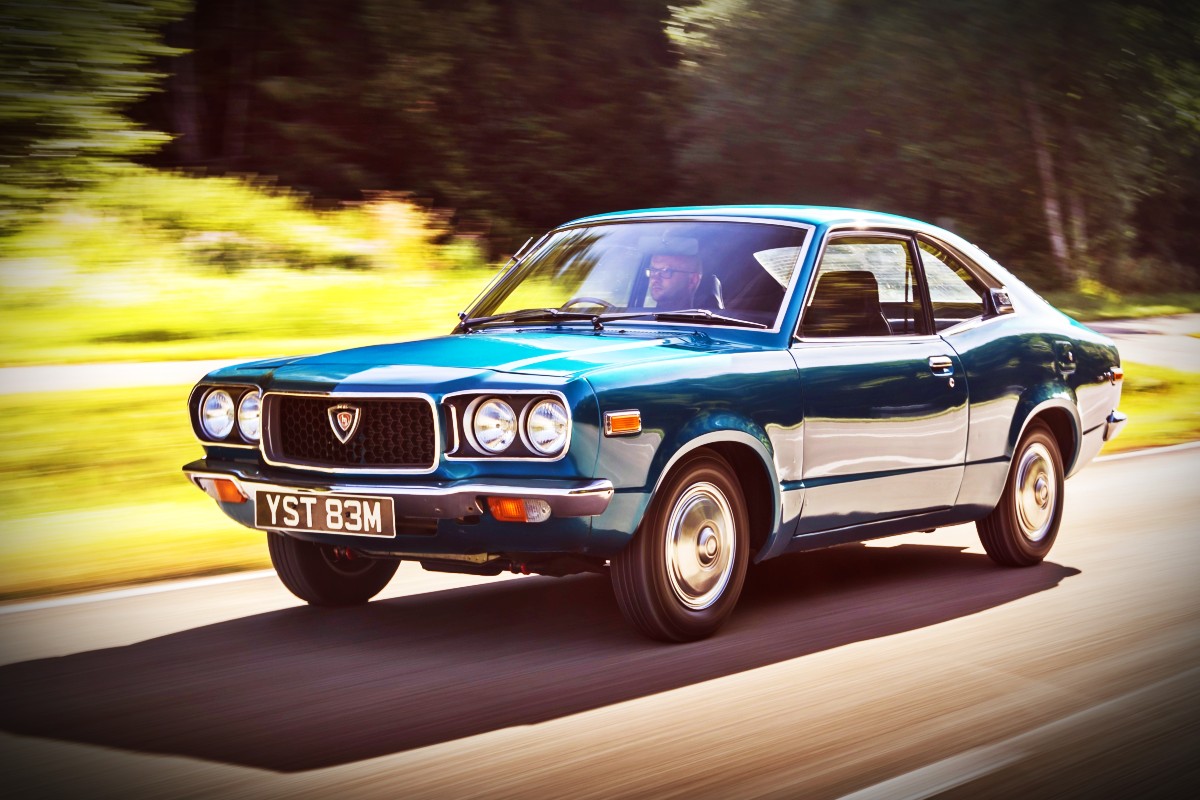 It’s the 50th anniversary of one of Mazda’s most interesting, adaptable and successful cars — the RX-3.

Often overlooked compared to the later RX-7 coupe or earlier and rarer Cosmo, the Mazda RX-3 was a landmark car, one that cemented Mazda’s association with the rotary engine at home and abroad — while its success as an export helped put the company on the map.

Not only that, its success on the racetrack led the way for the accomplishments of the later and more famous RX-7.

By the time production came to an end in 1978, more than 286,000 RX-3s had been produced, making it the biggest selling Mazda rotary outside of the RX-7.

Piston engine versions, called the Mazda 808, 818 or Grand Familia — depending on market — were also popular and added to the sales tally.

While the two-door coupe was the most popular and best remembered, the RX-3 was offered in coupe, sedan and estate body styles – making it the first Mazda rotary wagon.

The first year of the new decade also saw the first rotaries exported to Europe and the United States, and thanks to this line up of Wankel engine powered coupes, by the end of 1970 cumulative rotary production had reached 100,000 units.

The 1970 Tokyo Motor Show also saw Mazda display the radical Mazda RX-500 concept, unlike anything seen before — its futuristic design was a showcase for both the rotary engine and safety technology.

A wedge shaped, mid-engine, rear-wheel drive sports car with forward opening butterfly doors, its multi-coloured rear strip lights indicated whether the car was slowing down, cruising or speeding up by changing colour.

The rotary 10A engine was accessed by gullwing opening engine covers and this supercar concept exemplified Mazda’s boldness and technical prowess.

It was into this halcyon period of the rotary engine that Mazda launched the new Mazda RX-3 in September, 1971.

Smaller and sportier than the Mazda RX-2, the rotary RX-3 was called the Mazda Savanna in Japan, but was largely identical to the in-line four-cylinder powered Mazda Grand Familia launched alongside it.

As Mazda had done with previous models, offering a choice of piston or rotary powered versions increased the range and customer choice considerably.

And to fully understand the global picture, you first need to get your head around the naming strategy of the newest car in the line-up.

The rotary took the name Savanna in Japan, while overseas it proudly wore the RX-3 moniker.

To confuse matters further, Peugeot ownership of car numbers with a central zero saw the Mazda 808 become the Mazda 818 in Europe and the UK, while Australian and US cars retained the 808 naming — although later North America 1.3-litre versions were called the Mazda Mizer from 1976.

A version of the 808 was even licenced to Kia for production as the piston engine Kia Brisa K303.

Externally, the rotary RX-3 and piston Mazda 818 were distinguished by different grilles and headlights, with the RX-3 having twin round headlights while the 818/ Grand Familia had square lights or single round lights.

Plus, the unique rotor shaped badges on the RX-3 left no doubts to the type of power unit under the bonnet — a motif that later made an appearance with the RX-7.

Launched in September 1971, the RX-3 coupe, sedan and wagon all featured the 982cc 10A engine, while US cars were fitted with the more powerful 1146cc 12A engine.

From 1972, the Savanna GT went on sale in Japan with the larger 12A engine, which was also introduced in other markets alongside the 10A versions, until the 10A was discontinued in 1974.

By 1976, exports to Australia and New Zealand had stopped, but the car remained on sale in Japan and the United States through to the end of production in 1978.

Small visual changes distinguish 1971 to 1973 Series I cars from the later 1973 to 1978 Series II and Series III versions, with the sharper nose and grille the stand out feature of later models.

Updates across the range in 1975 included improved upholstery, tinted glass and the option of metallic paint for the first time.

The other crucial chapter the RX-3 played in the Mazda story was its success in competition.

Having raced the Cosmo and R100 Coupe in Europe at famous events like the Marathon de la Route and the Spa 24 Hours, Mazda focused on racing at home in Japan, taking on the Nissan Skyline in domestic racing.

The new RX-3 made its mark from the outset, taking its first victory at the Fuji Tourist Trophy meeting in December, 1971.

In spite of the battle for supremacy with Nissan reaching new levels of intensity, RX-3s went on to take the Fuji Grand Champion Touring Car class championship title in 1972, 1973 and 1975.

However, it wasn’t just at home that the RX-3 made its mark.

The RX-3 became a popular and successful race car around the world, competing in the USA, Europe and Australia.

However, it was 1975 when the RX-3’s racetrack success really cemented the rotary engine and Mazda into the psyche of antipodean car fans. Don Holland and Hiroshi Fushida won their class and came 5th overall at Bathurst with only V8 Holdens ahead of them.

In the United States the RX-3 was also popular and appeared in the famous Daytona 24 Hours in the hands of privateers, with one car finishing 14th overall and third in class in 1975 with only Porsches and Ferraris ahead of it.

Lessons learned helped Mazda’s return in 1979 with the new RX-7 where the team took victory in the GTU class – the first of more than 100 IMSA victories for the RX-7 in just 12 years.

The RX-3 was just as popular in European sedan car racing where it was campaigned by privateers in the European Touring Car Championship, including the flagship Spa 24 Hours.

In the UK, an importer who assisted racing customers get hold of RX-3s, helped to make the car a very popular choice in production sedan and touring car racing — and just as it was in other parts of the world, the RX-3 was also popular in amateur rallying.

Half a century on the RX-3’s fame may have been eclipsed by the RX-7, but this hard-working rotary and its less glamorous piston engine siblings did much to feed Mazda’s global sales expansion in the early 70s, while the RX-3’s success in competition was a hugely important early chapter in a story that led all the way to Le Mans victory in 1991.

Today, the Mazda RX-3 remains a popular choice for historic racers around the globe, while the car has gained cult status in the tuning, drifting and even drag racing worlds.