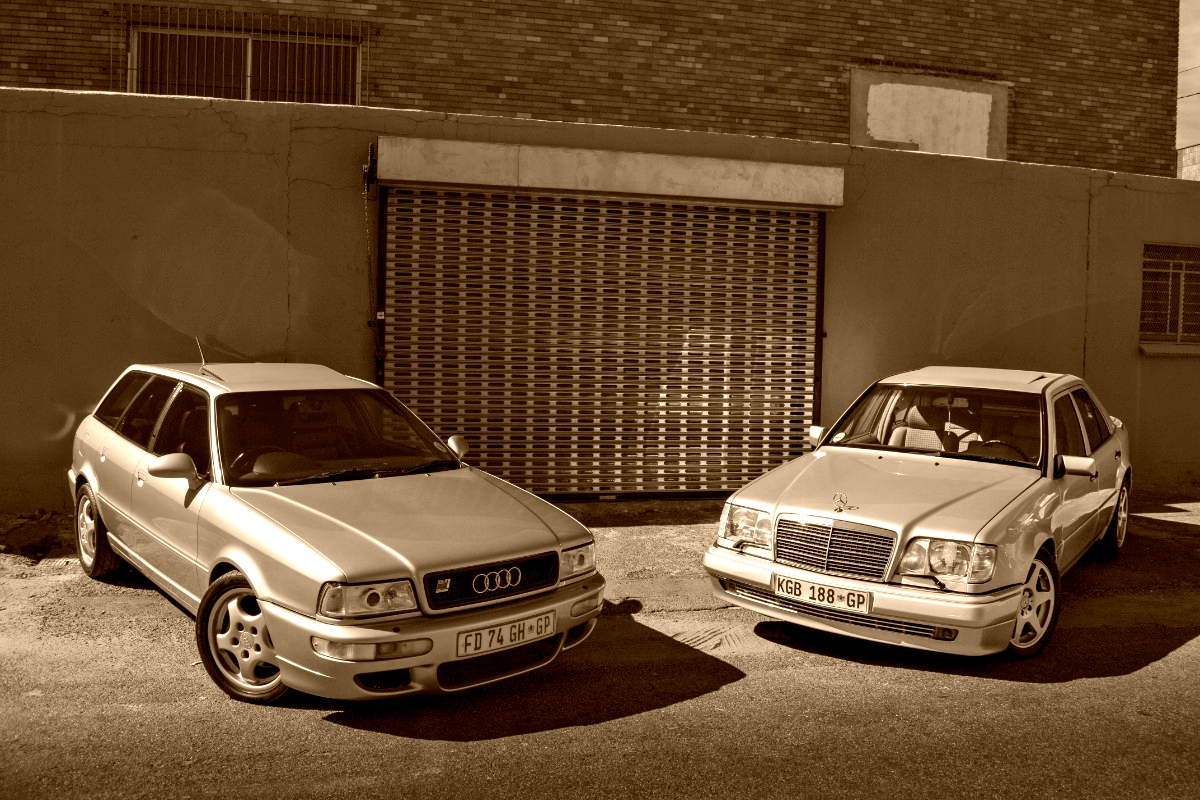 IN the late 1980s and early ’90s, German manufacturer Porsche was in a bit of trouble.

Finances were tight and new models were sitting in showrooms gathering dust.

Then inspiration and collaboration came from two rather unexpected sources . . .

In the late 1980s Porsche was still feeling the pain of a strong Deutsche Mark and a worsening global slowdown.

The 959 assembly line sat idle after its final production run and as a result, there was spare production capacity – and management was eager to fill it.

But competitor BMW had successfully launched the second-generation M5, which set the standard for the mid-sized super sedan category — and Mercedes-Benz needed to come up with a competitor.

Necessity is the mother of invention – and in this case collaboration – and Porsche’s Rössle Bau factory in Zuffenhausen, Stuttgart, is where an unlikely partnership would begin.

An historic agreement between Mercedes and Porsche was reached and in 1991 the 500E was launched.

It began life as a plain W124 300E Mercedes saloon – until Porsche got hold of it.

Cars would leave Mercedes-Benz to spend time at Rössle Bau, where Porsche strengthened the W124 chassis and widened the standard transmission tunnel in order to fit the much larger and heavier 4973cc aluminium block, 5.0-litre V8 that would be dropped under the bonnet.

The cars would then be sent back to Mercedes-Benz for rust proofing, painting and final trim installation.

Following that, each 500E would return to Porsche for final assembly.

With all this back and forth between the Mercedes plant and Porsche’s Zuffenhausen plant, and the fact that these cars were largely hand-built, it is not surprising that it took a full 18 days to complete each one.

The rear-wheel-drive 500E had a naturally-aspirated engine, derived from the 500 SL roadster, with a 4-speed automatic transmission.

External design changes were subtle but effective: the front and rear wheel arches were widened to allow for the larger tyres and track of the 500E which, combined with its lower stance, gave the car a meaner, shark-like appearance.

All this would explain the astronomical price tag: when the car arrived in the US in 1992, its selling price was set at a cool $80,000!

Despite this, it is said that Mercedes-Benz lost money on each car that was produced.

But for the German manufacturer, this car was not really about profit as much as it was about making a statement – and thumbing its nose at  BMW.

The car was nicknamed the ‘Wolf in Sheep’s Clothing’ by the press after it attained impressive results for the time.

It would stay in production until 1995, when it was renamed ‘E500’, when all Mercedes models changed their naming convention to alpha-numeric.

Apart from a facelift in 1993, under the bonnet things remained largely unchanged.

This vastly underrated car is becoming more and more sought after.

Why? After all, it is not ostentatious or showy – in fact, if anything, its subtle design cues make it hard to differentiate from mainstream E-Class models.

It takes a keen enthusiast to know this isn’t just any old Merc.

But this was the car that set the tone for the hotted-up AMGs that followed.

In truth, modern hot Mercs haven’t actually deviated from the winning 500E formula all that much.

This is a car that, every time you get behind the wheel, gently yet forcefully reminds you that it is no ordinary car – and has a history to prove it.

Even the grand house of Porsche acknowledged the 500E by granting it the official Porsche designation of ‘Type 2758’ and a 1995 E500 Limited is on display in the Porsche Museum in Zuffenhausen.

Perhaps inspired by the success of the Mercedes-Benz 500E, Audi asked Porsche to help transform a mundane Audi 80 Avant into one of the world’s quickest sportscars a few years later.

The agreement between Porsche and Mercedes-Benz had been one where Mercedes essentially outsourced production to Porsche.

But when Porsche collaborated with Audi, they formed a joint-venture called Arge – and this time profits made were split.

Although much of the car’s underpinnings were manufactured by Audi, assembly was handled by Porsche at the Rössle Bau plant, which had become available after discontinuation of the Mercedes-Benz 500E.

The RS2 Avant was Audi’s first ‘RS’ vehicle and the first of the high-performance Avants (Audi’s name for a station wagon).

The ‘RS’ stands for RennSport, meaning ‘racing sport’ in German.

It was powered by a Porsche-tuned 2.2-litre 5-cylinder engine fitted with a high-capacity turbocharger and upgraded intercooler.

Power was sent to all four wheels via 6-speed manual transmission and a sports-tuned version of Audi’s quattro all-wheel-drive system equipped with a manual differential lock.

Inside the cabin the sporty look was carried through, with electric Recaro seats in front and an RS2-specific instrument cluster with white-faced gauges.

In 1995, British car magazine Autocar timed the RS2 from 0-30mph (48km/h) at just 1.5 seconds, faster than both the McLaren F1 road car and Jacques Villeneuve’s Formula 1 car of the time.

These figures aren’t exactly jaw-dropping today but they were downright impressive in the mid-1990s.

In spite of being pricey, the RS2 immediately sent shockwaves through the automotive world and proved massively popular all over Europe.

Audi initially announced just 2200 examples would be built, but demand was so strong that eventually a total of 2891 RS2 Avants were manufactured by the time production ended in July 1995.

Although it was not widely exported outside of Europe, except for a few to Hong Kong, South Africa, Brazil and New Zealand, the RS2 has an impressive cult following worldwide.

It’s often regarded as being the vehicle that finally established Audi as a producer of practical, high-performance vehicles.

It had a sturdy station wagon body, with enough room for the whole family – even space to take the dogs to the park.

And, with Audi’s trademark Quattro permanent 4-wheel-drive system standard, it was usable as a comfortable daily driver, even in poor weather conditions.

This is a car that despite its unexciting, slightly nerdy aesthetics, and the fact that it could be used as a soccer mum runabout, packs a sneaky punch and has that understated uber cool factor that might not be obvious at first glance – a bit like Superman in Clark Kent disguise.

The Audi RS2 Avant, like the Mercedes 500E, possesses this X factor in spades.

And this, together with their relative rarity and interesting bloodline, makes these two dubious heirs to the Porsche throne definite sleeper classics.