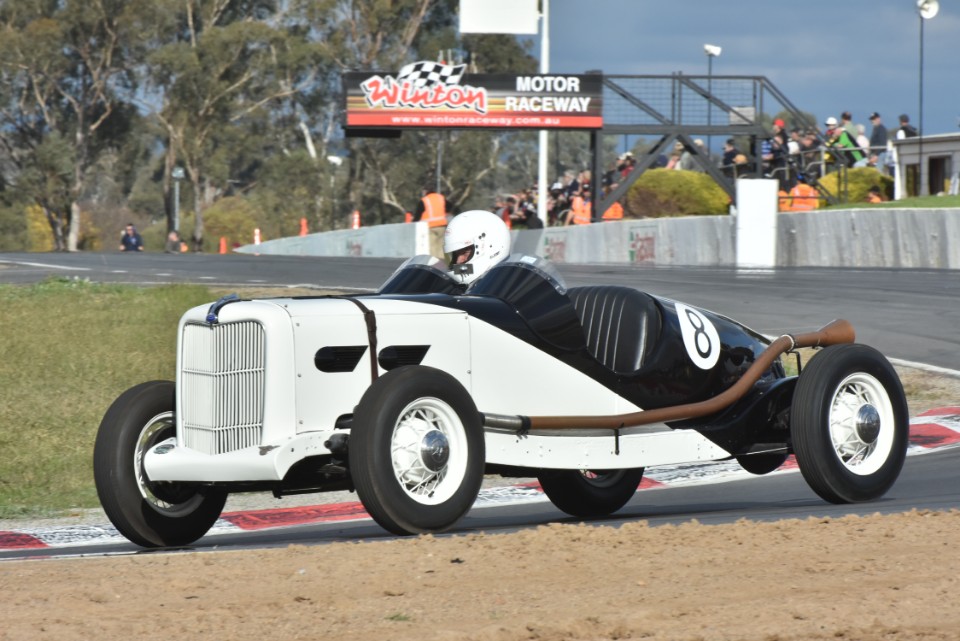 Ted Parsons Snr and Jack Phillips were Ford service and sales agents in Wangaratta, Victoria, from 1932 to 1962.

Back in late 1935 these two young guys were  bitten by the motor racing bug.

They stripped the guards off a 1932 Ford V8 Tourer to race on the Aerodrome at Benalla in 1936.

Liking what they had achieved, they decided to build their own race car using a Ford V8.

These changes proved to be a great success.

Jack drove and Ted tuned the car on the move from the passenger seat.

It was fitted with Winfield carburettors and a Scintilla magneto.

Some of the duo’s best results came close to home on the old Wirlinga track.

The track was part of the old Hume highway in NSW near Albury which was by-passed when the Hume Weir was built.

A section of the track contained a number of crests which saw cars getting airborne at speeds above 130km/h.

The biggest race was called the Albury Interstate Grand Prix, with 33 laps of the 4 mile (6.4km) circuit.

During the Second World War the race car was displayed in the showroom of Wangaratta Motors, the then local Ford dealership.

A supermarket now sits on the site.

After the war the car was sold and used for grand prix racing in Australia until it was crashed into a bridge and destroyed.

Futura inspired by sharks and stingrays

And that would have been the end of our story, except for the fact the car has been recreated by Ted Parsons Jnr and his son Rob.

Using photos from family albums, Ted and Rob started the work in 2008 and the car was completed in 2014 — in time for that year’s Historic Winton.

Sadly, Ted Jnr died in 2011 and never lived to see the finished car run on the Winton track.

But you can because the car is now raced at events like Historic Winton, which is held in May each year.