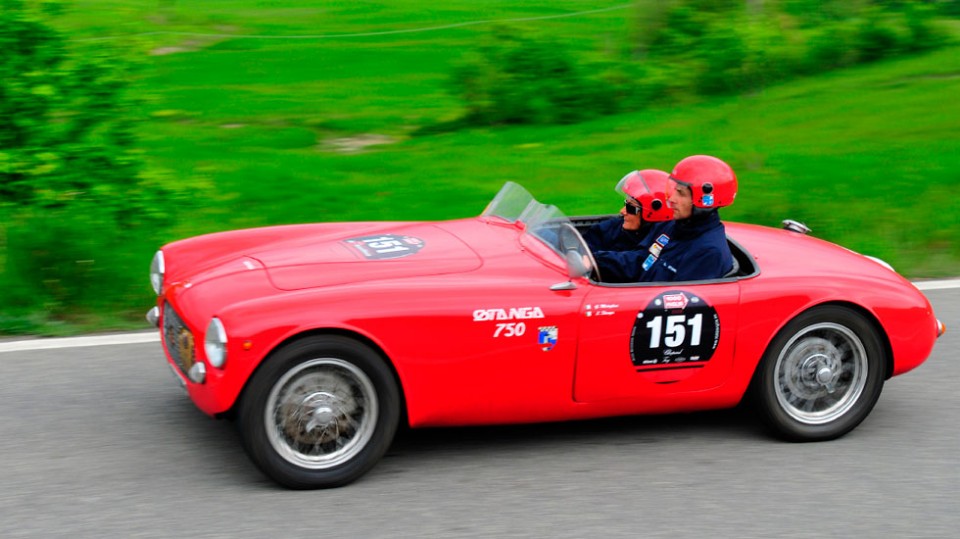 Home
Wheel life
No car, no problem — build it yourself

IN Australia, and many other parts of the world, keen amateurs who couldn’t afford factory racing cars — simply built their own in the past.

Hence there were some weird and wonderful machines among the works cars from Ferrari, Maserati, Mercedes-Benz, Auto-Union, Gordini, Vanwall, Cooper and a few others.

Very few of the home-built specials ever got to a podium, but the pride of having an hour or more (usually less) in the company of the racing elite made the effort worthwhile.

While most of the specials were single seaters, it was a different story in Italy, where from 1927 to 1957, every Italian car enthusiast dreamed of racing in the Mille Miglia.

It was an event for road-licenced cars that enthralled the nation — and most of the world — and was run from Brescia in northern Italy to Rome and back — a distance of 1000 miles.

It gave Italian car makers a chance to show what their products could do and also attracted entries from other European nations.

Run on public roads and through the narrow streets and over bridges of countless towns along the way, all of them lined with enthusiastic fans — more than five million of them each year.

But it was for sports and touring cars, not single seaters and it was responsible for the popularity of brands such as Fiat, Alfa Romeo, Ferrari and Maserati, Mercedes-Benz, Renault — and later, Porsche.

Times were tough in the post-war years, and the cheapest car in Italy was the Fiat 500, which soon became the basis of many a home-built sports car.

As well, Fiat rewarded drivers of specials using its parts if they won their class, as Dino Brunori reports in Veloce Today.

This is his story of three brothers and how they realised their dream.

Gianfranco, Camillo and Sandro Stanga were the sons of a Fiat dealer based in Orzinuovi, 20km south of Brescia.

The boys had literally grown up in the dealership’s workshop, where their passion for engines fuelled their dreams of racing, first and foremost in the Mille Miglia.

When the race resumed after the interruption of the war years, Gianfranco and Camillo decided to build their own car in the family workshop.

The work began in 1948. Starting from a chassis with a Fiat 500A engine built in 1938, they assembled a ‘barchetta’ car, equipped with Borrani wire wheels and modified the engine with the adoption of a Siata head, which in those years dominated the minor racing categories.

The body in aluminium was built by Cervi & Corna of Brescia, a workshop mainly devoted to the transformation of cars into vans, a typical operation in Italy in the post-war years.

The two brothers started the 1949 Mille Miglia in their Stanga and ended 123rd overall.

It was a good result but almost two hours behind the Fiat Benedetti of Maggiorelli, winner of the 750 sport class.

This result convinced them to prepare a new car that would be far more competitive.

At the start of the 1950 race, the Stanga presented a ‘siluro con parafanghini’ (torpedo with fenders) built with a tubular Gilco frame, equipped with a 625cc Giannini G1 engine with a Siata head and aluminium body made by Rocco Motto of Turin.

The race was lashed by rain but our two heroes arrived 33rd  and second in class, behind the Fiat Patriarca of Leonardi.

The discomforts suffered with the 1950 car convinced them to prepare a new car for 1951, a more comfortable ‘barchetta’ with bodywork by Motto, and again a Gilco frame and the Giannini G1 Siata engine.

The car, the third built by the brothers, brought them back to Brescia 40th, still second in class but 30 minutes quicker than in 1950.

The car went perfectly and the brothers, after making further changes to the engine, returned with essentially the same car for the start in 1952.

But this time the engine broke on the way back near Siena, forcing them to retire, after having achieved second in class at the mid-point of Rome.

For the 1953 edition, they decided that they had enough rain and cold, and so they commissioned a small berlinetta from Rocco Motto, still based on their classic Gilco /Giannini/Siata scheme.

The car’s body was a scale copy of the Fiat 8V. Although it was comfortable, the results were miserable and they finished 168th.

With the same car the two brothers showed up at the start of the 1954 Mille Miglia, but they were again forced to retire.

Disappointed by the failures of the last two editions, Camillo bought back the torpedo they created for the 1950 event and entered it in the 1955 race.

Sitting beside him was his third brother, Sandro, who had replaced Gianfranco, and the two managed this time to return to Brescia with an honourable 123rd.

But now the competition was getting even tougher; on the scene appeared the bialbero engines of the Bandini and Moretti, with more horsepower than the old Giannini.

But the brothers didn’t mind for it was a romantic endeavour; being on the start line was more important than the result.

At the beginning of 1956 Gianfranco bought back another of their earlier cars, the one they drove in the 1952 Mille Miglia.

He entered the penultimate Mille Miglia without a co-pilot, but luck left him even before arriving in Rome.

After 1956 Camillo decided to build a new sport, the fifth car built in the family.

Again using a Gilco chassis, he decided to adopt the mechanics and the engine of the Fiat 600, tuned up to 750cc and a body built by Carrozzeria Manerbiese — in a very shapely aluminium body as per the form of racing sports cars of the period.

But results were again poor.

The 1957 event would be the last Mille Miglia and the last of the family Stanga race cars.

The end of the race in 1957 was the finish line of the cars built by the brothers, although Gianfranco continued to race, becoming an official driver for OSCA and winner of the Italian hillclimb championship in 1962.

Two of the cars survived: the barchetta (third car) still owned by the Stanga family and the sport (fifth) in the hands of a collector in Brescia.

Both cars still appear in the Mille Miglia of today, as a remembrance of those years when you could build your own car and enter it a great race.