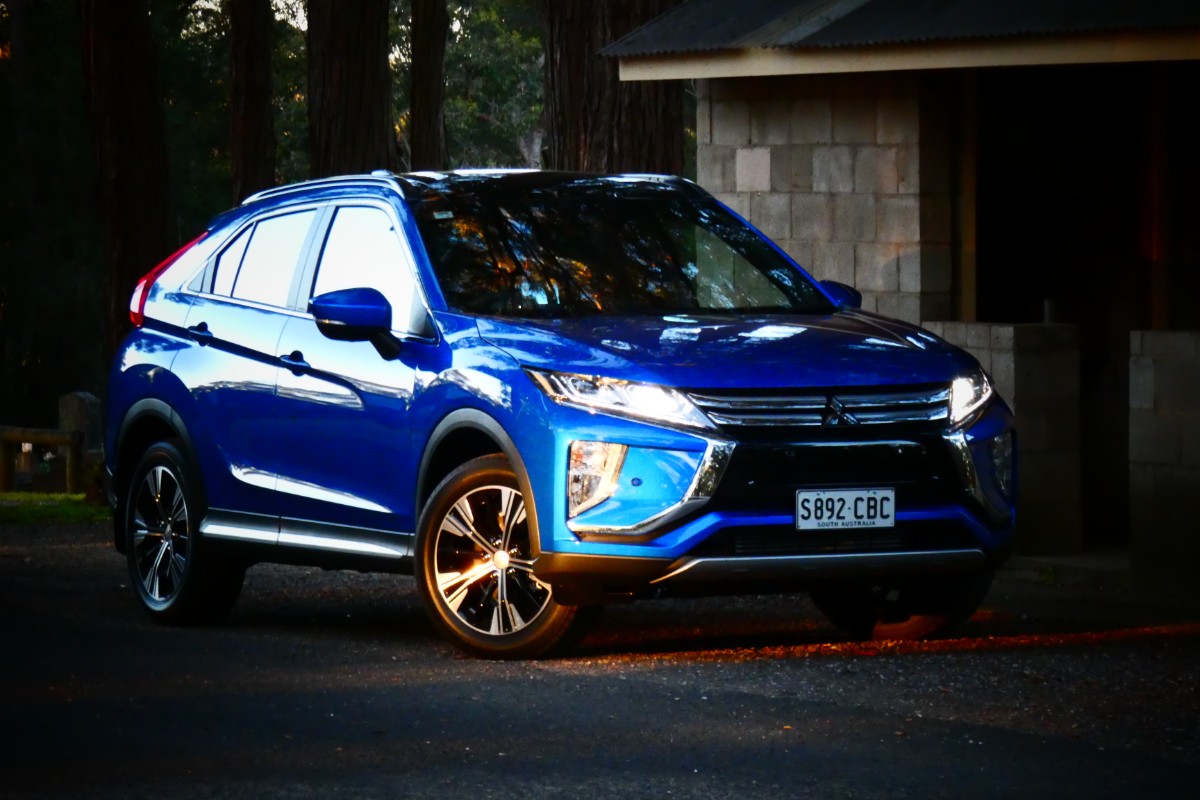 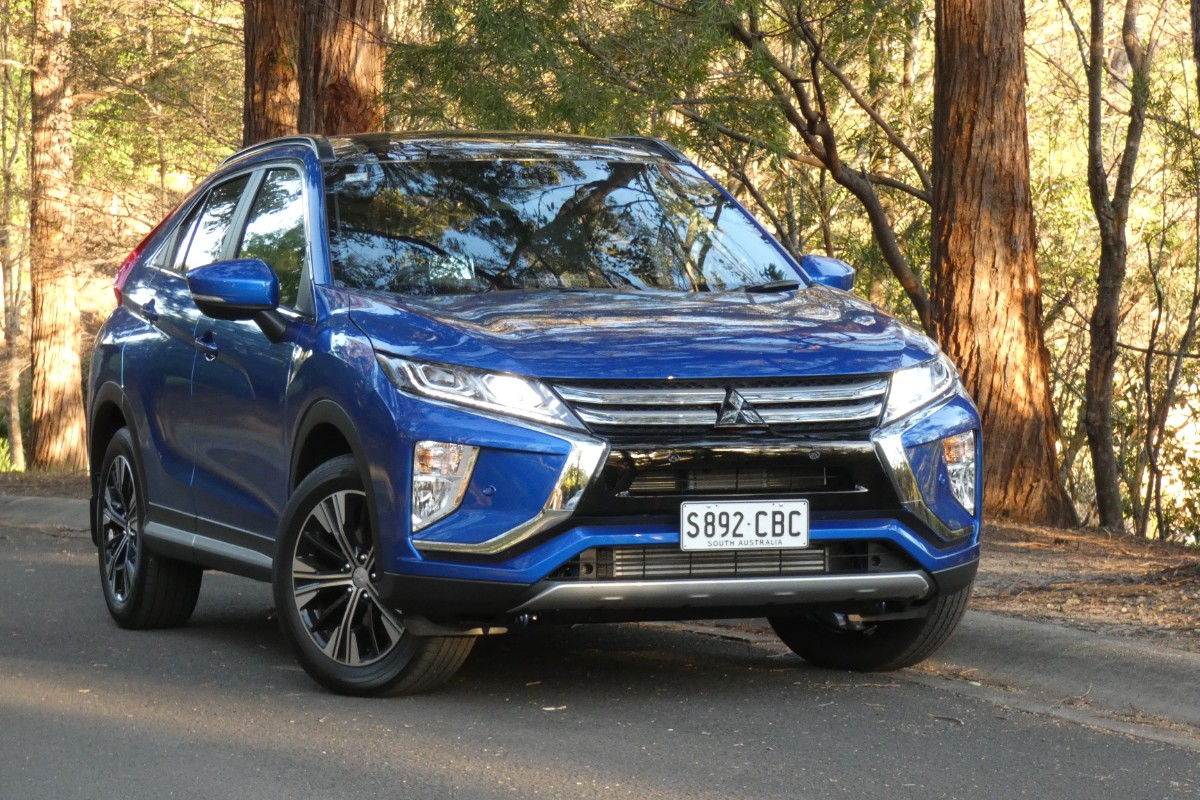 Mitsubishi has just updated the five-seater which sits between the ASX and larger Outlander, in terms of size.

But it doesn’t get the new “robust & ingenious” face that debuted with the Triton ute and that we spied recently on the latest ASX.

Despite predictions Eclipse will eventually replace ASX, there appears to be no immediate plans for this to take place, especially with a new ASX about to drop.

The car is defined by it fastback styling and two-tier rear window.

It’s an appealing look, especially in profile, but the large rear corner pillars make over the shoulder vision difficult.

Interestingly, ASX and Eclipse share the same platform, while ASX, Eclipse and Outlander all have the same 2670mm wheelbase.

Eclipse Cross (it’s a bit of a mouthful) is about 100mm longer than ASX, has more rear legroom but a smaller boot — although the rear seat slides backwards and forwards to create more space as needed.

There’s three grades, all with the same engine and transmission, and all bar the entry model have the option of all wheel drive, with prices starting from $29,990.

There’s also a value two-wheel drive Black Edition with extra gear and trendy black treatment based on the entry ES. 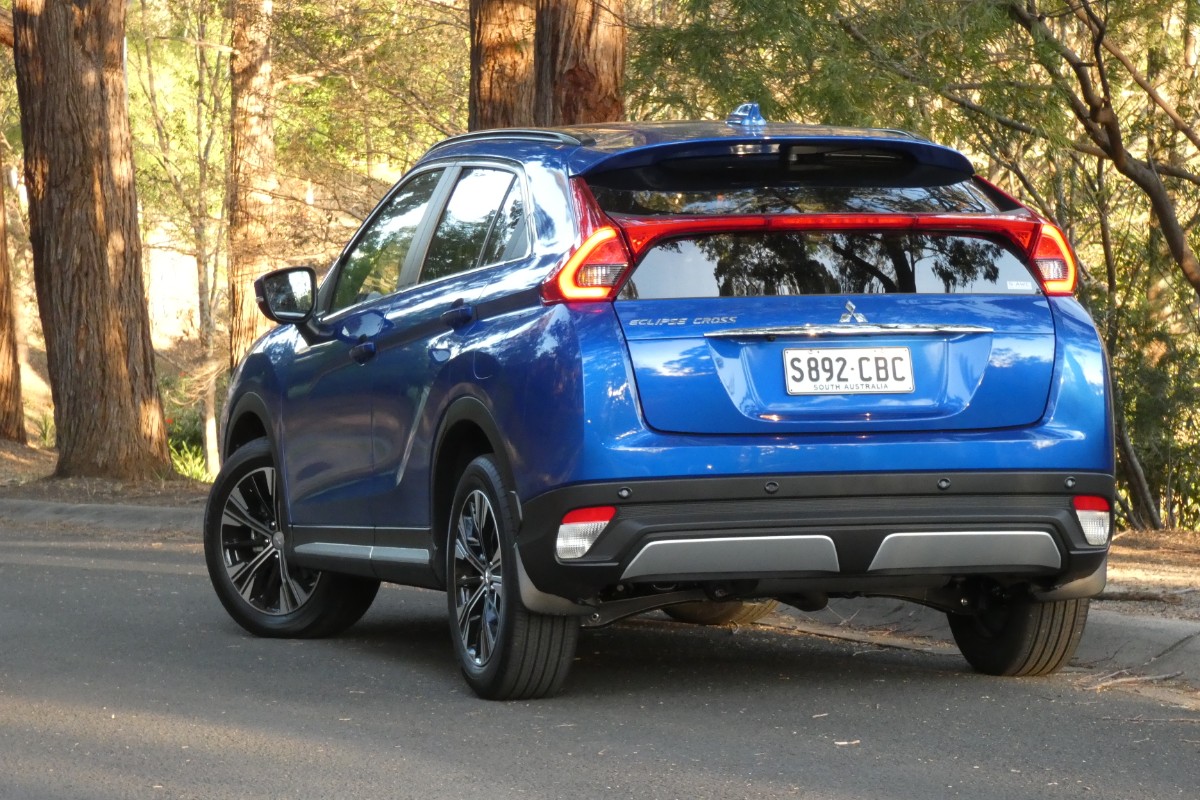 The range kicks off with the ES, followed by the LS and Exceed, the latter two available in two- or all-wheel drive form.

Metallic/pearlescent paint adds $690, while premium paint bumps the price $890 (we’re not sure what this entails).

Forward Collision Mitigation is a form of autonomous braking and works up to a speed of 80km/h with stationary objects — 200km/h if they’re moving.

Exceed gets the lot, apart that is from satellite navigation.

For some reason Mitsubishi seems to think connecting your mobile phone via CarPlay or Android Auto is sufficient.

Maybe in Japan but not in the iffy land of Oz where reception is patchy and drop outs can leave you stranded, not to mention the hit and miss nature of connection to the car.

The misacceleration thingy reduces the chance and severity of hitting obstacles if the driver mistakenly presses the accelerator pedal instead of the brake at speeds up to 10km/h. 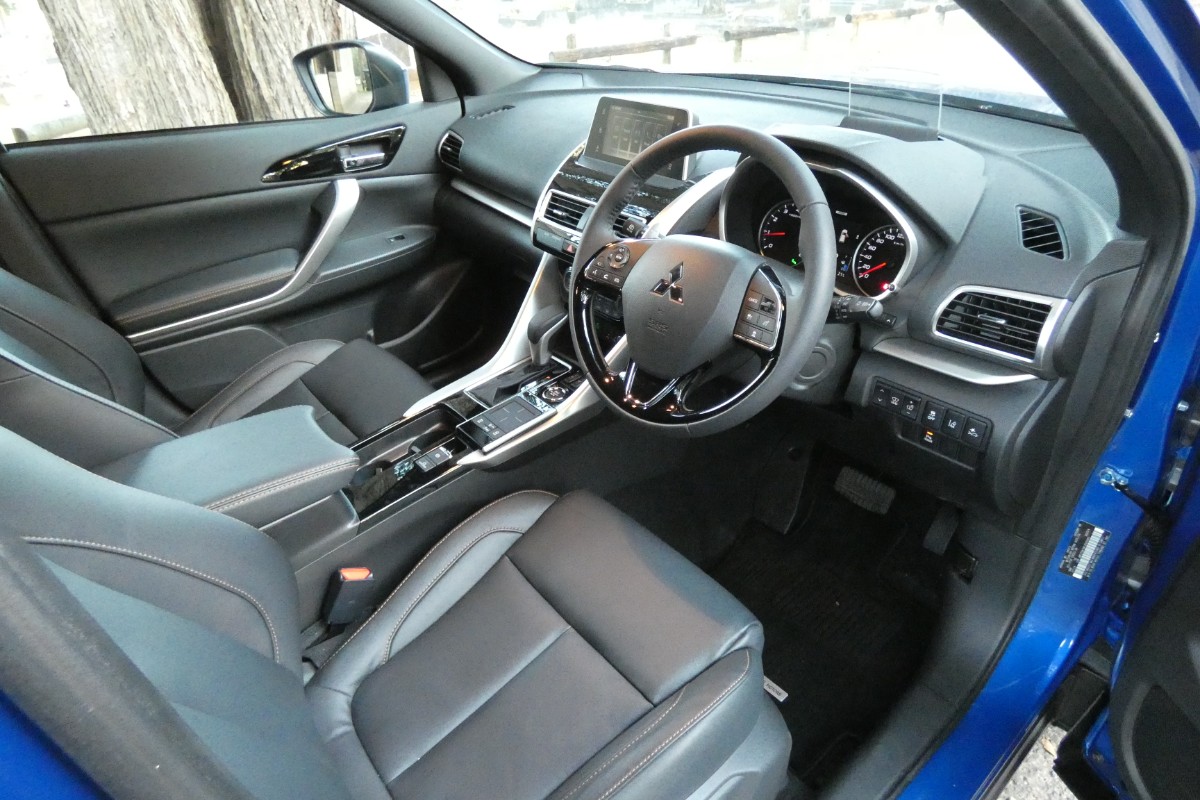 The 1.5-litre four cylinder, direct-injection turbocharged petrol engine delivers 110kW of power at 5500 revs and 250Nm of torque at a lowish 2000 revs.

It’s paired with a CVT style, continuously variable automatic transmission across the range that offers 8 steps or gears in manual mode, and can be accessed via large gear change paddles.

This controls the brakes and power steering to modulate power between the left and right side wheels which improves accuracy through corners, in a straight line and during lane change manoeuvres.

With plenty of torque on tap early in the rev range, Eclipse gets off the line smartly, but throttle response can be unpredictable.

At times the power delivery is smooth and linear, at other moments it’s unexpectedly sharp and peaky.

The driver has the option to change gear manually using the paddles, but the provision of a sport mode would add some consistency to proceedings.

Every time you take your foot off the accelerator the transmission goes to sleep and every time you want to accelerate, it takes a second or two to wake up.

Changing gear manually prevents this, but no one wants to change gears themselves all the time — that’s why we buy autos.

The CVT could be a deal breaker, so make sure you take the car for a good drive before signing your life away.

And by that we don’t mean just around the block. Take it for a good long run that includes some steeper hills and see how you feel about the transmission afterwards.

Try using the gear change paddles too and see what a difference they make.

Driven sedately the experience is generally smooth and user friendly, but the harder you push the more intrusive the CVT becomes, slurring rather than changing gears.

Some people find the way it operates disconcerting, like waiting for a gear change that never arrives.

Just like the throttle the brakes can be a little abrupt too.

The ride is firmish and a little jarring at times, while the cabin is quiet and reasonably comfortable.

Get off the smooth motorway surface and it quickly loses its composure.

On a more positive note, the pop up style heads up display is handy for monitoring speed (and can be seen while wearing polarised sunglasses).

Less user friendly is the silly track pad that can be used to control the touchscreen.

But it’s a touchscreen? What’s the point? We found no need to use the thing and you probably won’t either.

And that brings us to our old friend the trip computer and its stubborn refusal to do what it’s told.

There’s a switch that tells the computer not to reset fuel consumption between drives, but no matter how many times we tried, the trip computer kept resetting.

We can’t with any accuracy tell you what sort of consumption we were getting, suffice to say it was sitting on 8.7L after more than 500km.

We’ve asked Mitsubishi about this before without result. 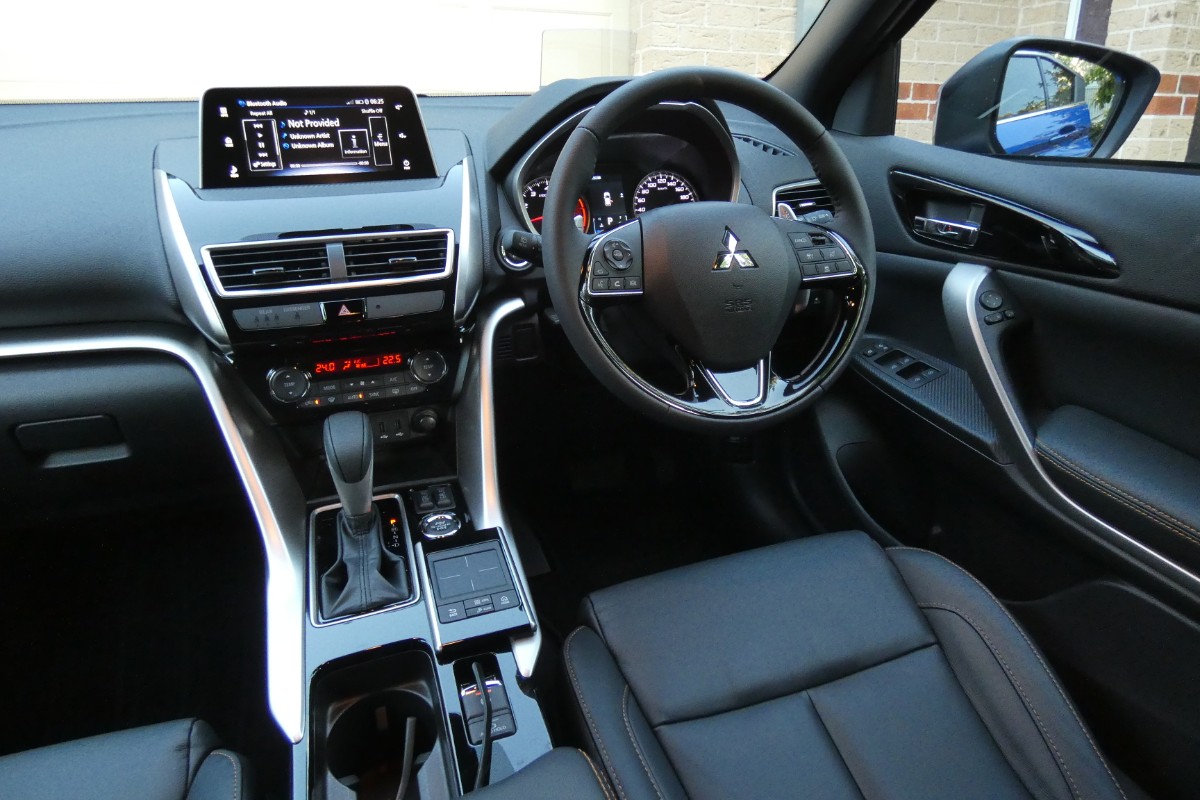 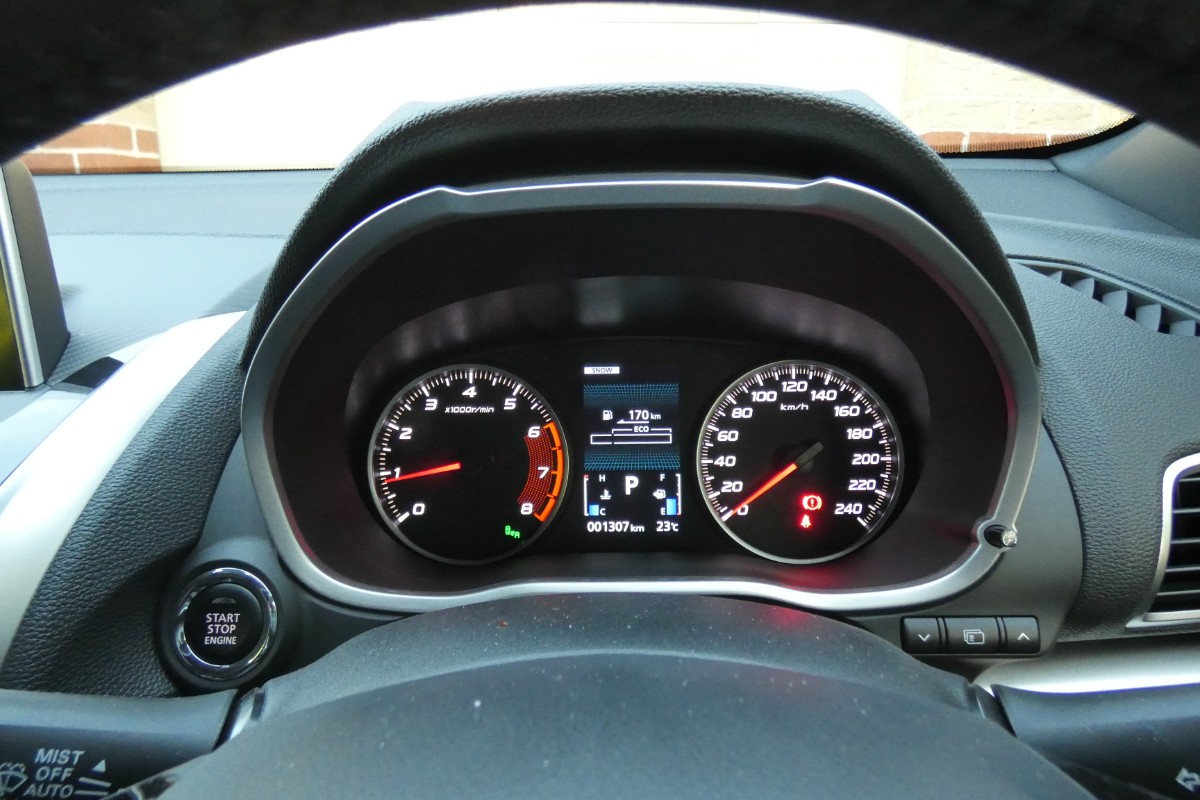 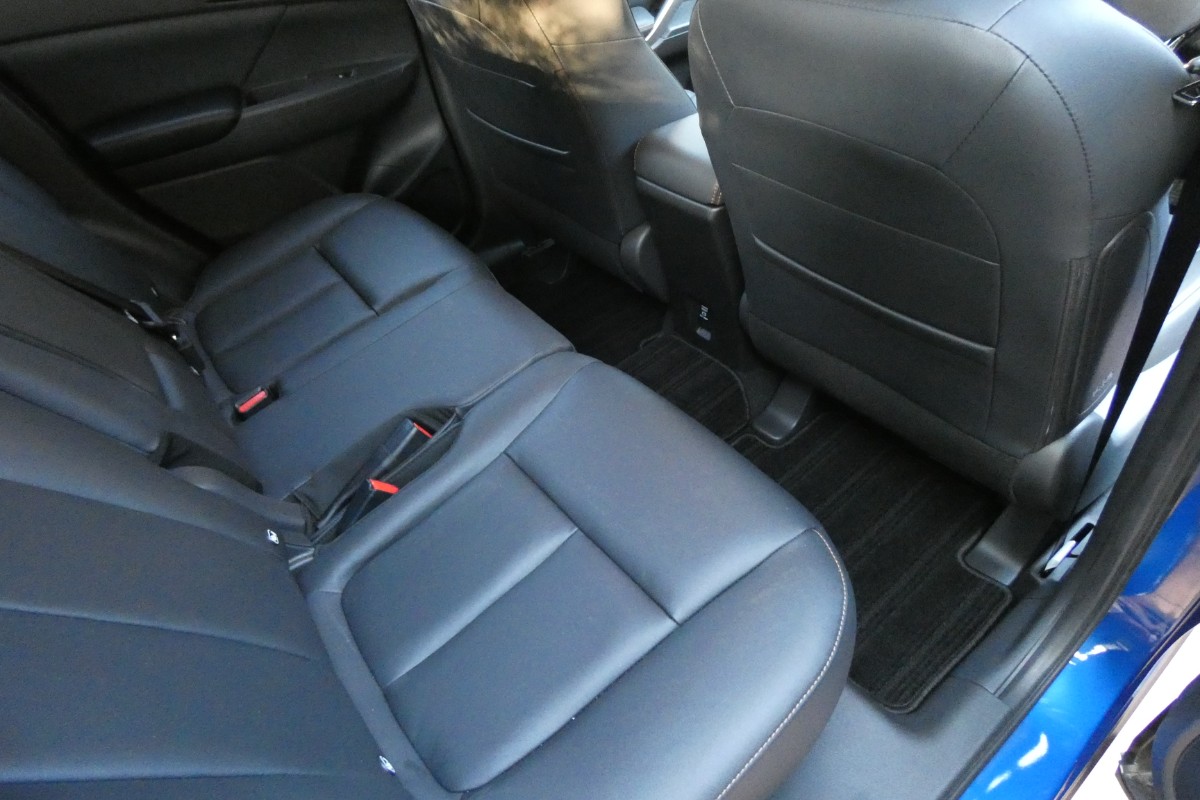 It’s a good size, quiet and comfortable inside, and potentially returns better than average fuel consumption — if only the trip computer stopped resetting we’d know for sure.

But it’s really difficult to warm to the CVT transmission, with its noisy, zoomy, unpleasant feel — it needs some refinement. 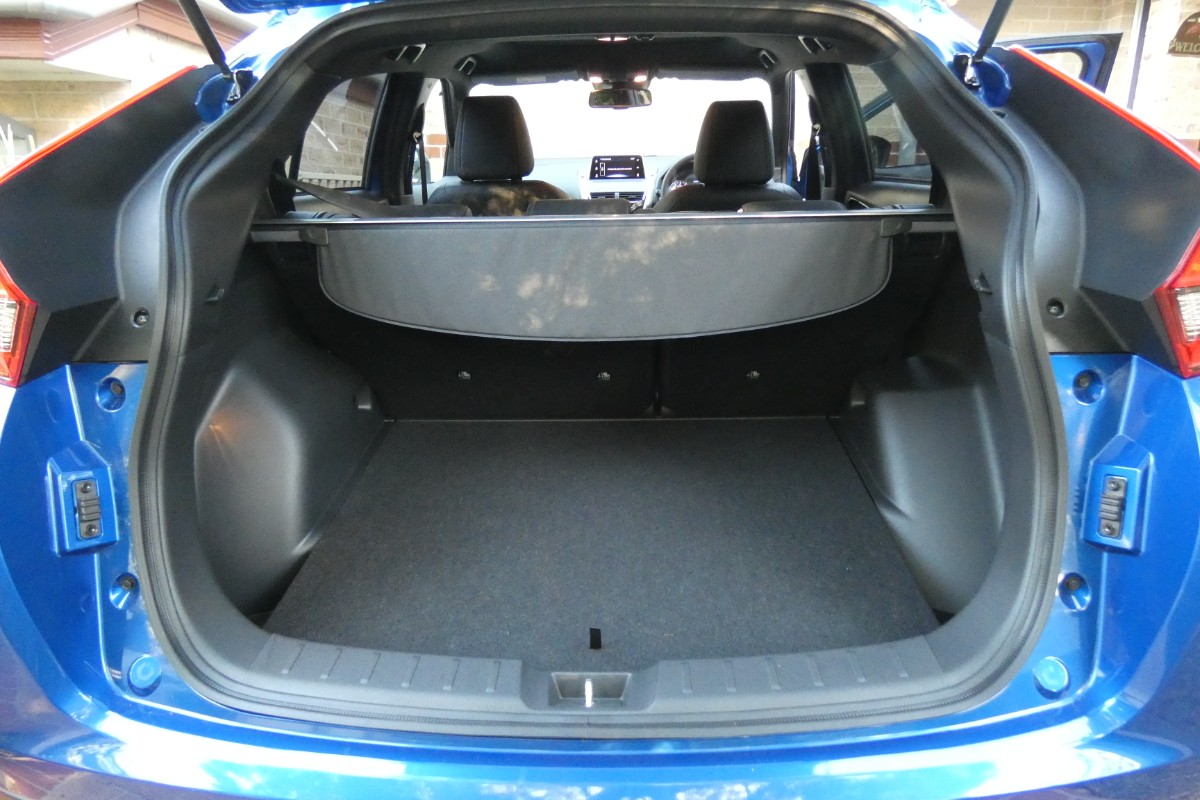 Check out deals on the Mitsubishi Eclipse-Cross