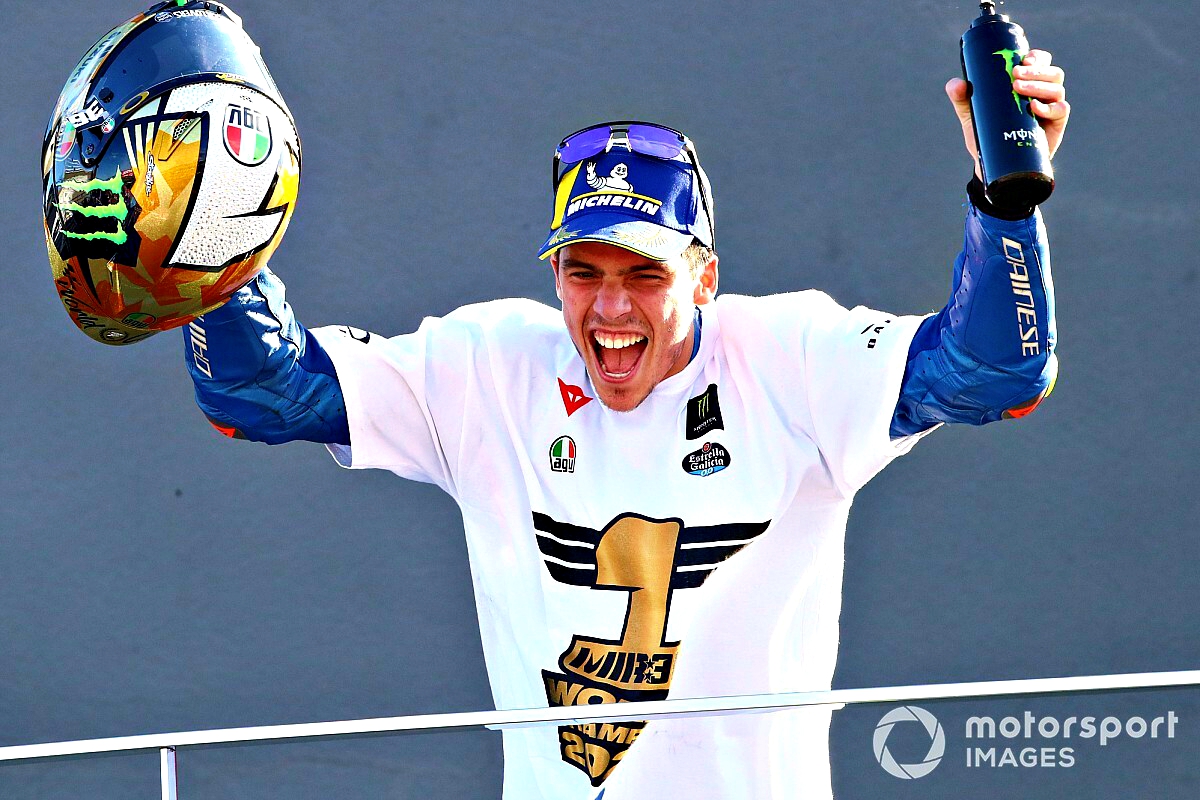 ITALY’S Franco Morbidelli won his third MotoGP of the season in a nail-biting finish in Valencia, but it was Spain’s Joan Mir, down the order in seventh spot — who took the 2020 MotoGP crown.

Morbidelli started from pole on his Yamaha SRT and had a tense race-long duel with Australia’s Jack Miller, who finished just 0.09 of a second behind on his Pramac Ducati.

Miller snatched the lead at the start but ran wide on Turn 1, letting Morbidelli through, then started the chase that lasted for all 27 laps of the twisting circuit.

The last lap was breathtaking, with Miller nosing past in Turn 1 and 3, then drifting slightly wide to let Morbidelli sneak by on the inside in the successive corners.

“My aim was to pull away and I wasn’t getting that,” Morbidelli said.

“The maximum advantage I had was 0.9s after 14 laps, then it started to go down so that on the last lap he overtook me.

“Then it was just a matter of trying to answer every move he was doing and finally I was able to get it right and finish in front, which was a great, great feeling.

“We are second in the championship now and I am looking forward to (the next round) Portimao.”

His other wins were at Misano and Aragon, which he won comparatively easily.

“I knew I could be tough in a fight, but I hadn’t done it in top positions so it was nice to have a fight and prove myself against a great rider for the victory.

“I don’t remember much of the last lap, but I knew I was going underneath him, no matter what.”

Jack Miller was at his laconic best after the race.

“I had this mega plan figured out in my head where I would pass him on the straight with one lap to go and ride into the sunset,” he said.

“But it wasn’t to be as I soon found out when I went into Turn 1 and nearly went straight off the end. There was a bit of tailwind and I got a bit carried away I guess…

“He came back, turn two was nice and tight, then into four and five, he got the better of me. I nearly ran onto the grass at turn seven trying to pass him, but he did really well to protect the line.

“Massive congratulations to him, he rode awesome.”

Morbidelli’s third win of the season draws him level with teammate Fabio Quartararo, with the Petronas SRT Yamaha pair the only ones to have clinched more than one win this season.

However, Joan Mir clinched the championship and in doing so gave Suzuki its first title in 20 years.

He’s also the first rider to have won he world crown in Moto3 and the premier class.

Lawrence of Arabia died on one

Quartararo came off his Yamaha at Turn 2 on lap nine after running out of room in the braking zone and another potential winner, Takaaki Nakagami crashed in the dying laps while trying to edge past Pol Espargaro’s KTM for third place and Johann Zarco dropped out of contention early, coming off his Avintia Ducati on lap six.

Behind third-placed Espargaro was Alex Rins, who scythed up the field from 14th on the grid and managed to keep his Suzuki ahead of Brad Binder on the other factory KTM, with Miguel Oliveira sixth on the Tech 3 KTM.

Joan Mir played it safe, knowing his seventh spot was enough to give him the crown. He stayed ahead of Ducati’s Andrea Dovizioso with Aleix Espargaro (Aprilia) and Yamaha’s Maverick Vinales rounding out the top 10.

Alex Marquez, the only rookie apart from Brad Binder, finished way down in 16th after he had a spectacular crash in the qualifying rounds that threw him skywards.

He was lucky not to be run over by other riders, but he fell hard and his appearance on the start line was surprising.

There was much joy in the Suzuki camp after Mir’s title win.

It was the brand’s first since Kenny Roberts Jr in 2000 and Mir is the sixth Suzuki rider ever to be crowned MotoGP world champion.

Next round is the Portuguese MotoGP on November 22.