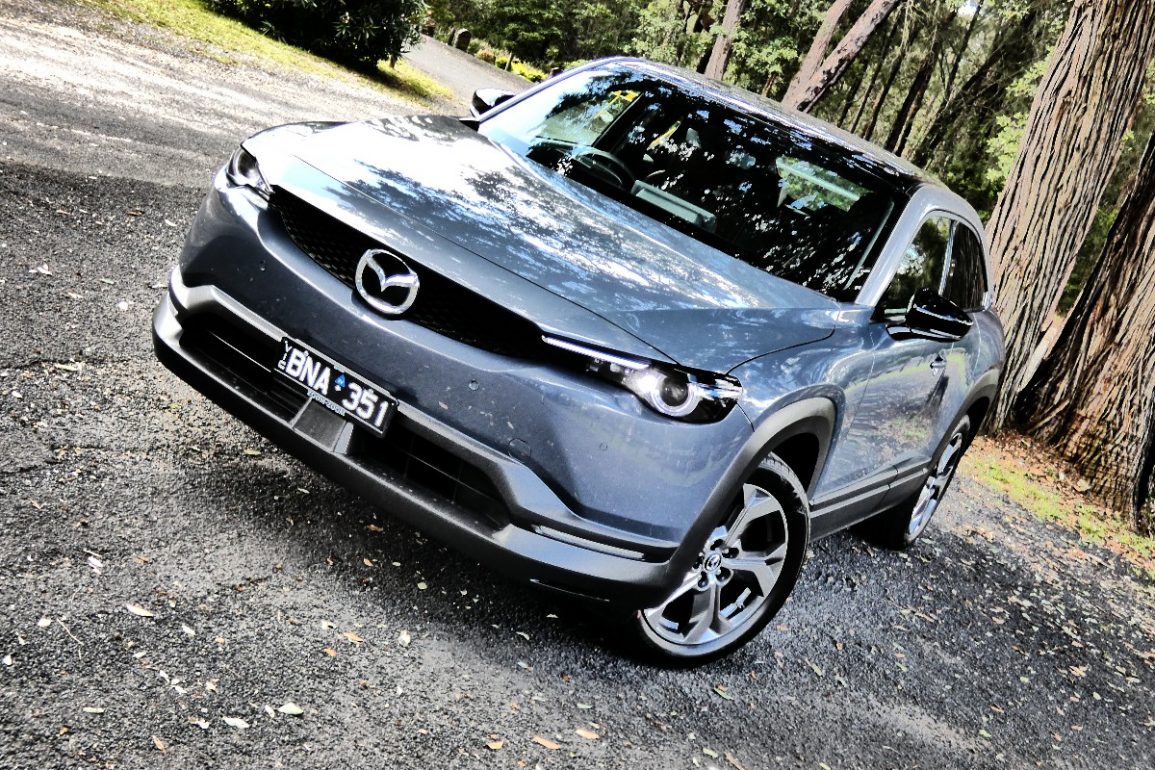 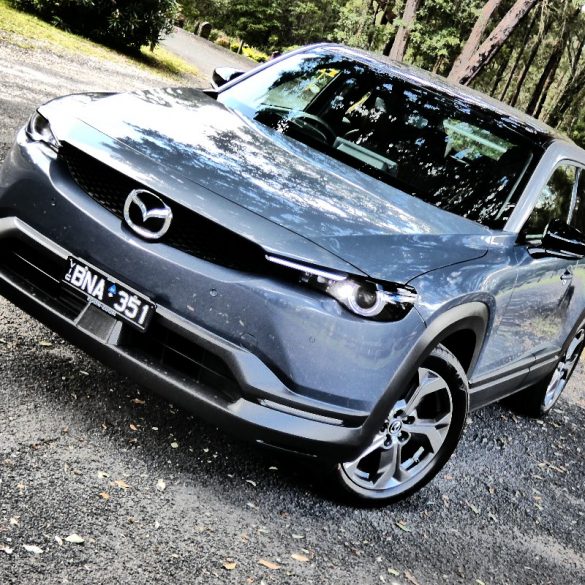 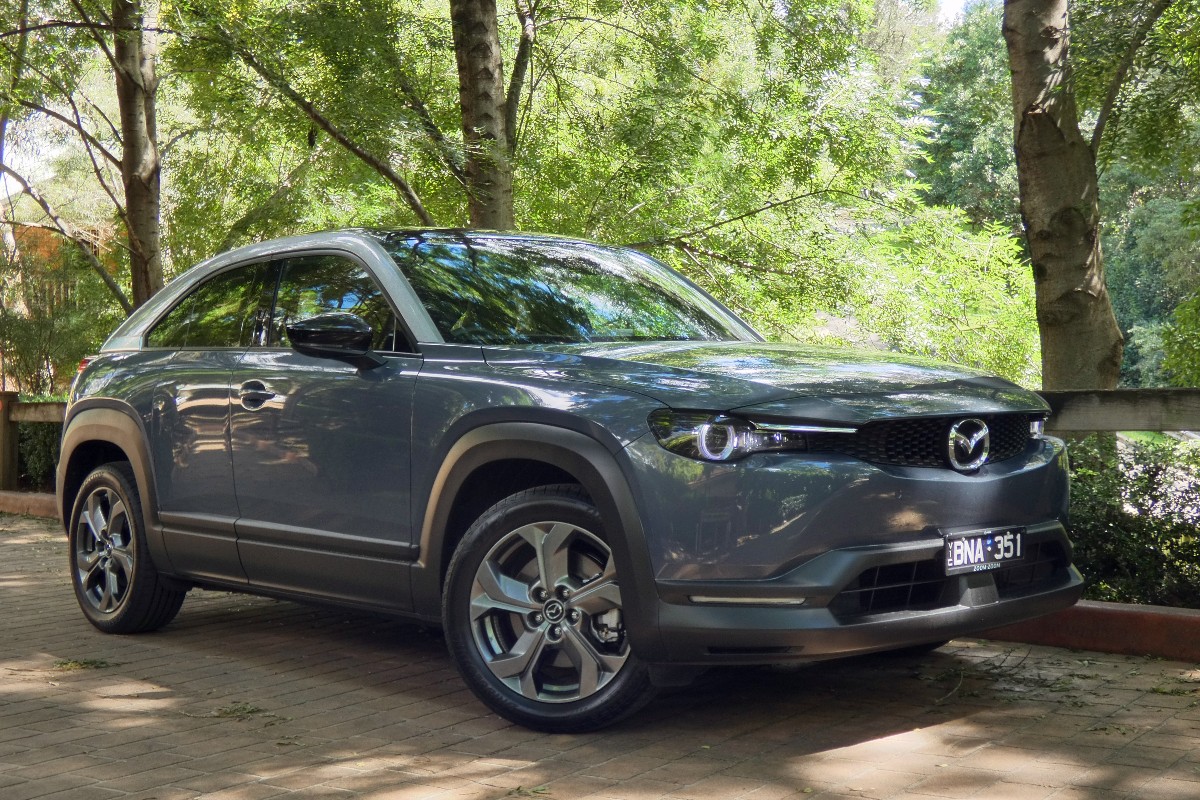 We were supposed to get the Mazda MX-30 Electric a few weeks ago, but someone forgot to charge it.

The plan was to drive from Sydney’s Alexandria to Cameron Park near Newcastle, a distance of about 160km.

Just in case, we had identified the location of some fast, commercial chargers along the way.

Like competitors, it would be nice if the satnav directed us to the nearest charger that will do the job — but it doesn’t. 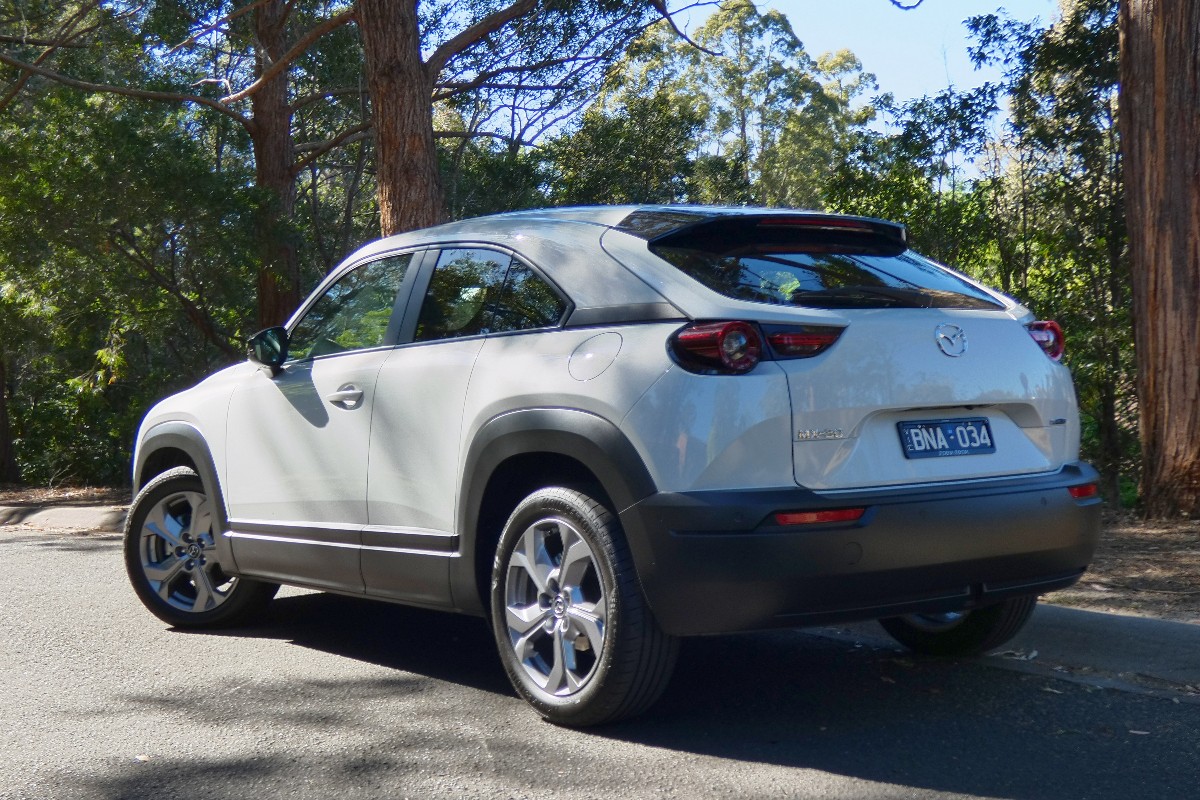 What you get for your dollar

Priced from $65,490, Mazda MX-30 Electric is the latest in a growing selection of electric vehicles (EVs) now available in Australia — and Mazda’s first fully-fledged electric offering.

It also offers a hybrid, petrol-electric option and apart from a small badge, they could be twins.

Priced from $33,990, the Mazda MX-30 M Hybrid is powered by a 2.0-litre petrol engine, together with a battery and integrated starter generator.

What you don’t get is a power tailgate or wireless phone charging, nor is there a spare tyre — just a puncture kit.

Service intervals are 12 months or 15,000km and it comes with a 5-year unlimited kilometre warranty along with 5-year roadside assistance.

Finance with guaranteed buyback is offered and you can pay for servicing in advance which costs $1273 for five years. 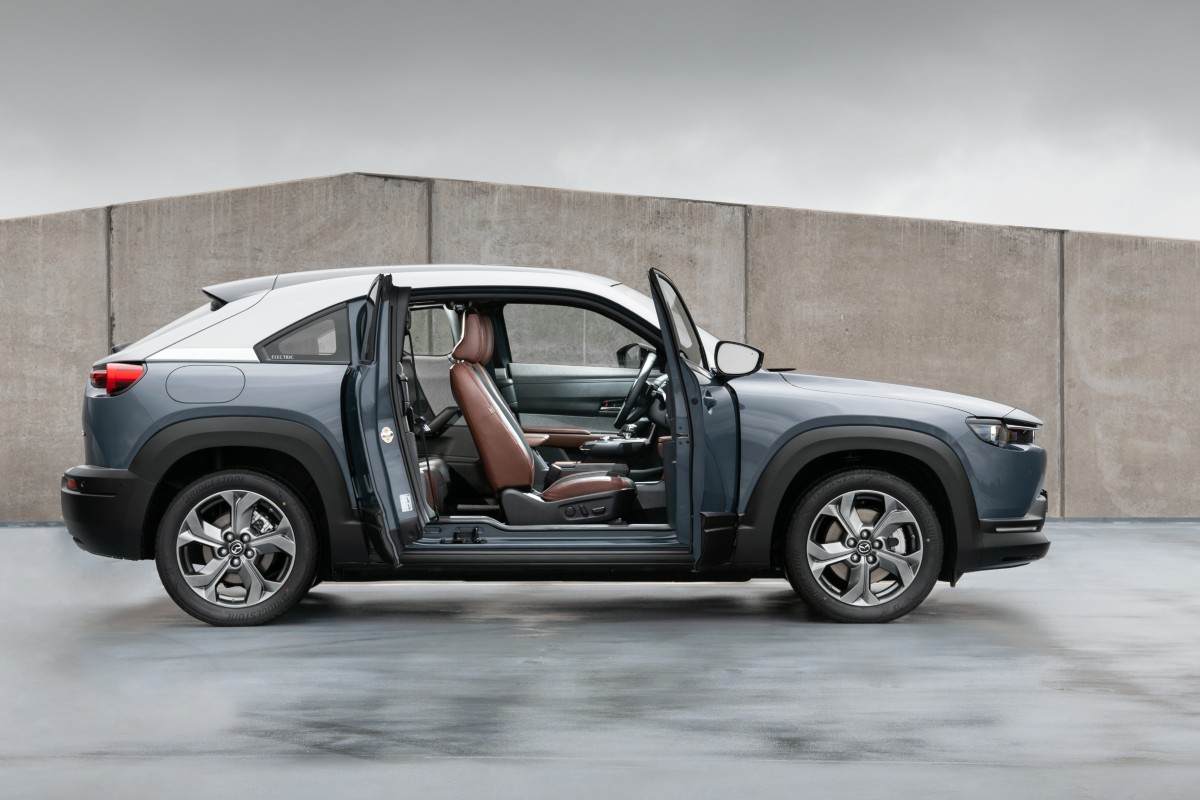 The drivetrain generates 107kW of power and 271Nm of torque, with drive to the front wheels via a single-speed reduction gear style transmission.

It has a smallish 35.5kWh battery and consumes 18.5kWh/100km which in part explains the car’s meagre range, although Mazda describes 224km as the “perfect” figure for urban commutes over the course of a typical week.

It is however quick to point out that range figures are for comparison purposes and may not always reflect real life driving results.

Factors include the starting charge of the battery, accessories fitted (post registration), variations in weather, driving styles, vehicle load and use of features such as air conditioning or heated seats.

Because the electric motor makes little or no noise, the audio system generates a comforting, turbine-like sound that rises and falls with the accelerator.

Even so, when there’s nothing else to fill the void, tyre noise has a way of intruding, especially over coarse bitumen thanks to the hard compound rubber.

Unlike earlier EVs, the charge port is located at the rear of the car like petrol models and supports both Type 2 AC and Combo 2 DC charging connections.

It’s supplied with a portable charger that can be plugged into a standard 240V, 10A household outlet and takes about 9 hours to deliver 20-80 per cent charge (as in not fully charged).

Stepping up to a 6.6kWh AC wallbox or public charger, the same 20-80 per cent takes about three hours.

With a commercial 50kWh DC charger, the time reduces to as little as 36 minutes.

The thing is that continual use of fast chargers is likely to reduce the operational life of the batteries. 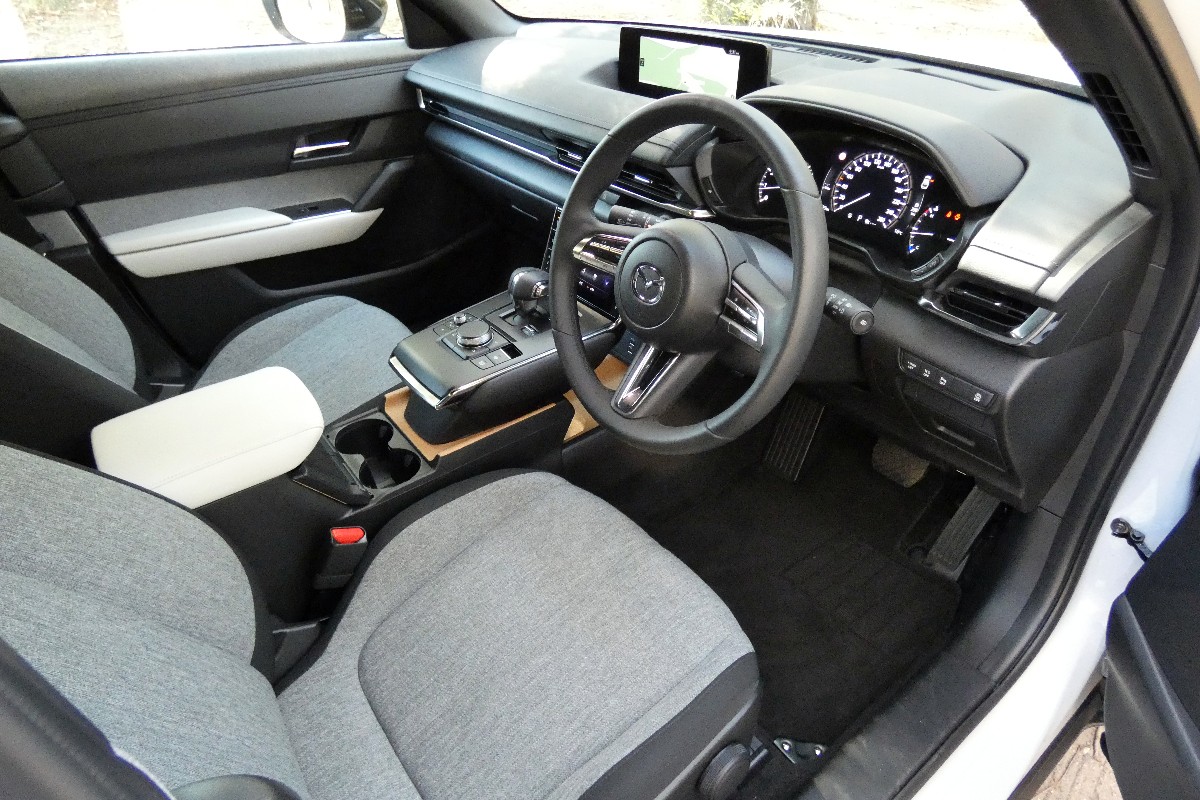 At pick up the car showed 98 per cent charge and a maximum range of 183km, nowhere near the promised 224km — and perilously close to the 160km planned.

I might add, the trip back from Cameron Park to the Blue Mountains is 190km and could have been a major drama.

In hindsight, we we’re lucky the booking fell through.

By the time we got our electric wunderkind home, we had travelled 85.5km.

The battery had 52 per cent remaining and a range of 96km.

It had been a long day so we decided to put off charging until the following evening.

The small boot by the way accommodates a large suitcase, but little else.

We were forced to put the rest of our luggage in the back.

That’s when we discovered the Freestyle or “suicide” doors as they are sometimes called, resurrected from the RX-8 sports car.

FYI. Guys, they didn’t work then — and, guess what — they still don’t.

Rear legroom is extremely limited and once you’re in the closeted back, the doors cannot be opened until the front doors have first been opened.

In other words, you’re stuck. So don’t expect your next Uber to turn up in an MX-30 — hybrid or electric. 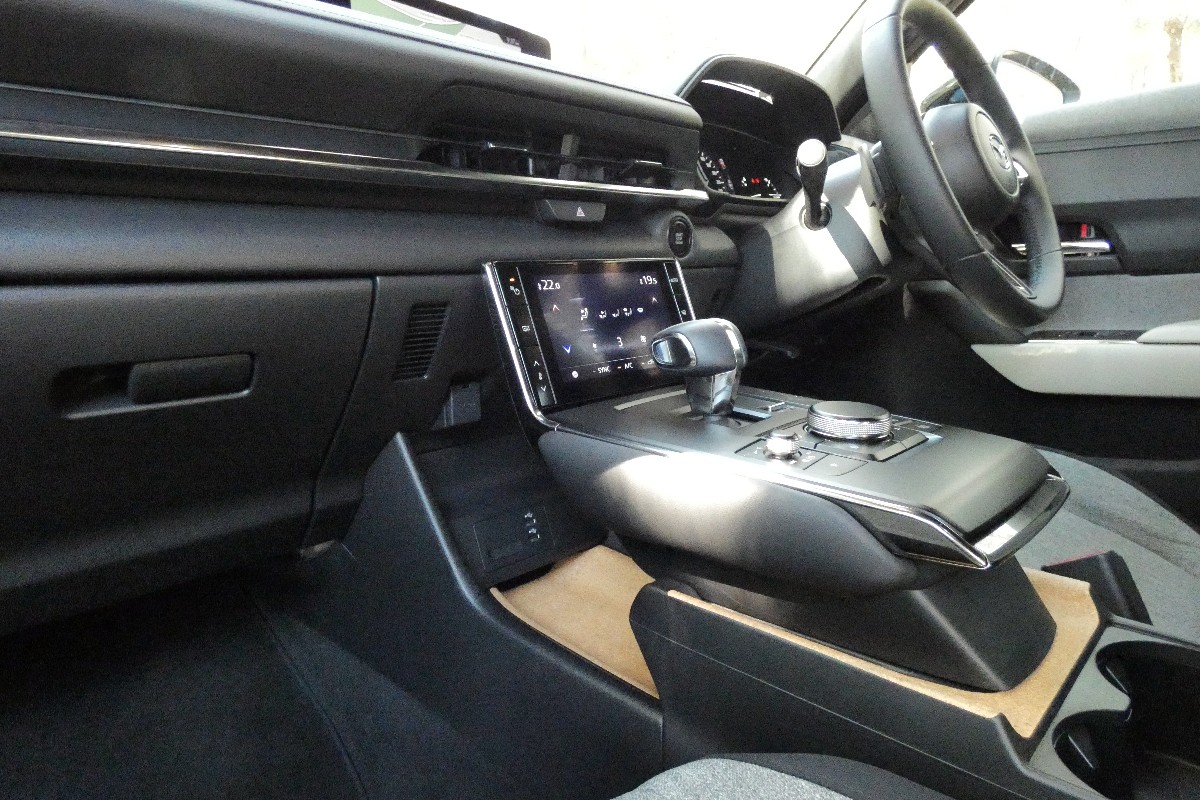 The battery was sitting on 32 per cent and range showed just 57km.

My wife who had been driving the car reported trouble starting, not once — but about one in every three starts.

She also had trouble getting it into reverse at one point.

Also of note. We have a reasonably steep driveway and discovered the front doors will not stay open on the incline, making getting in and out risky.

Connected the car to the charger in the evening in readiness for the next three days of travel to and from work. 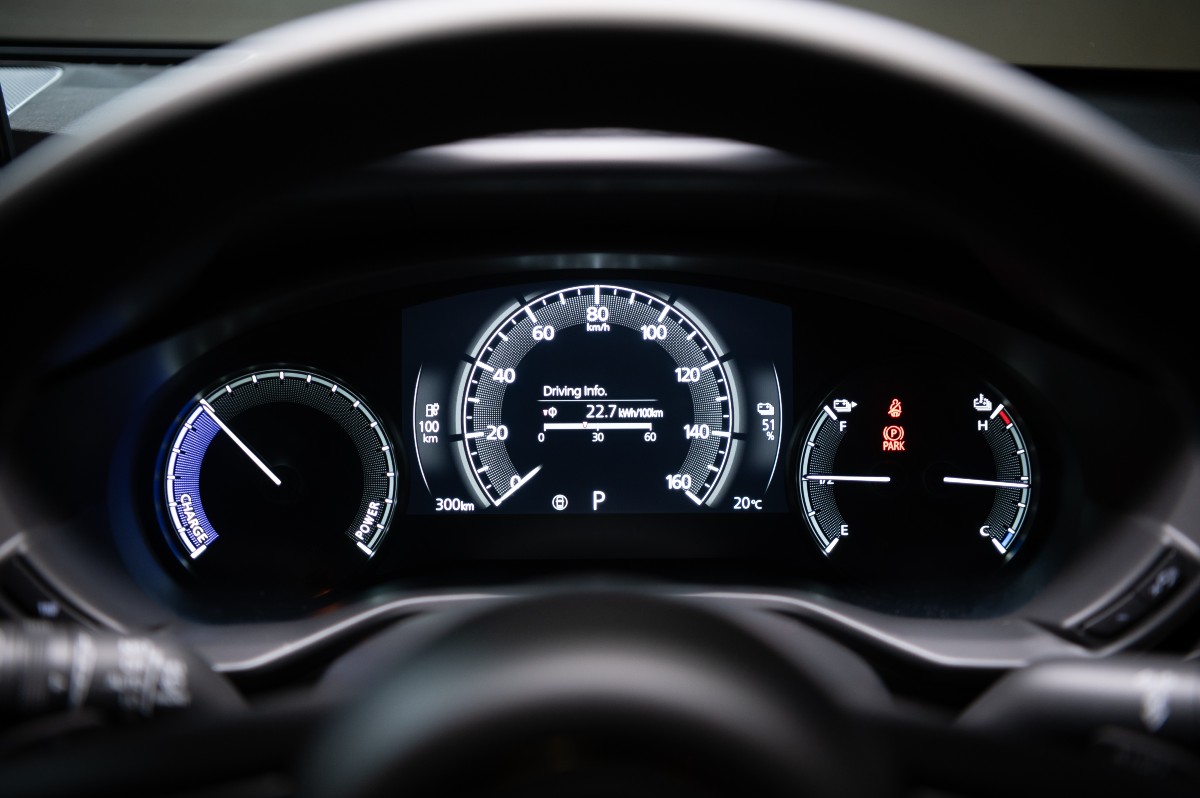 All charged up and nowhere to go.

Alas, my wife called in sick and the MX-30 spent the day sitting there.

If we had to go out, we took our own car because the Mazda was parked in.

To explain, charging an electric car, at our place at least, involves moving cars around, so the EV has access to the garage and a power point.

An extension lead will not work — believe me, I’ve tried.

Because charge cables are only three or four metres long, you often need to reverse in too.

It’s ironic because EVs are touted as the perfect choice for city dwellers, most of whom don’t have access to off-street parking.

The whole charging scenario turns the purchase of an EV into something of a lifestyle choice.

You spend your time worrying about how much charge the car has left and when and where you’ll have the opportunity to charge it again. 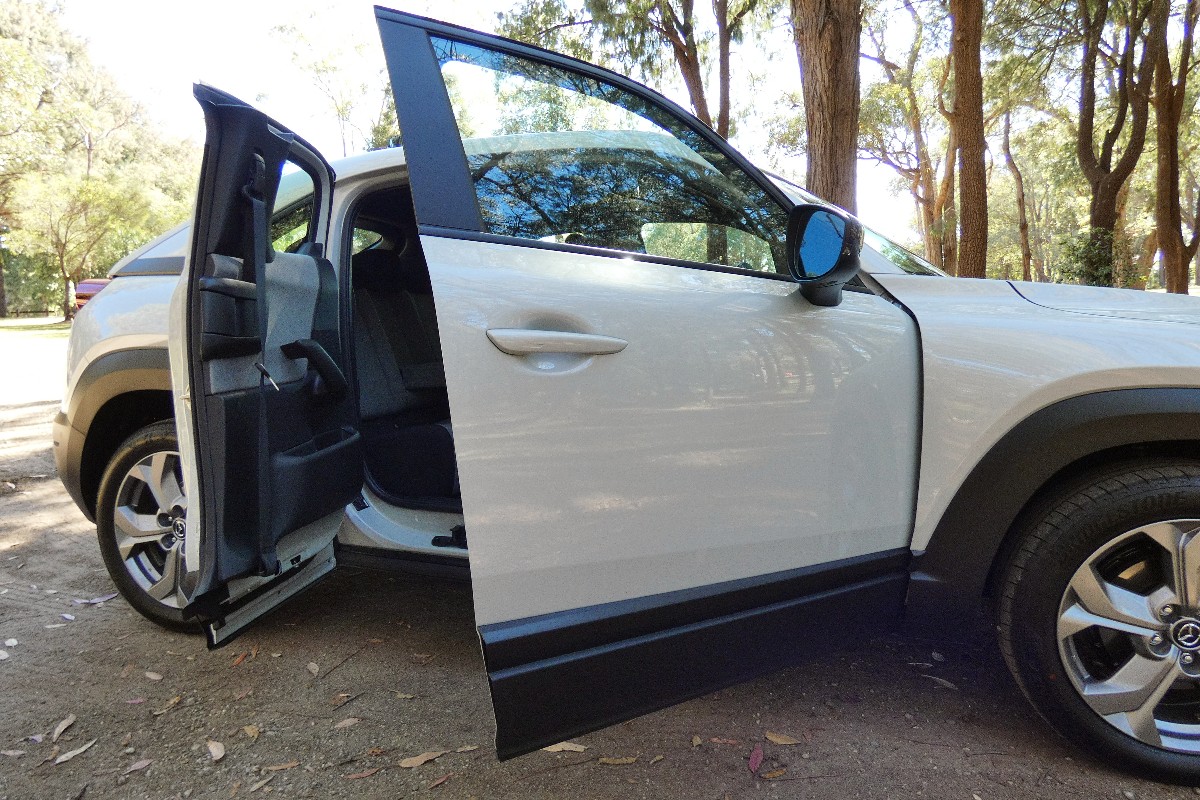 The MX clocked up another 41km, bringing the accumulated distance travelled to 156km.

After a couple of days charging, it started the day with a full charge and a range of 181km (still no sign of the promised 224km).

My wife likes the fact the Head-Up window display shows school zones as well as the current speed limit.

I’d like it too, that is if it was visible to my polarised sunglasses.

In our area, we have seen a proliferation of mobile speed cameras in recent times and the display is a constant reminder of how fast we are going (and how fast we should be going). 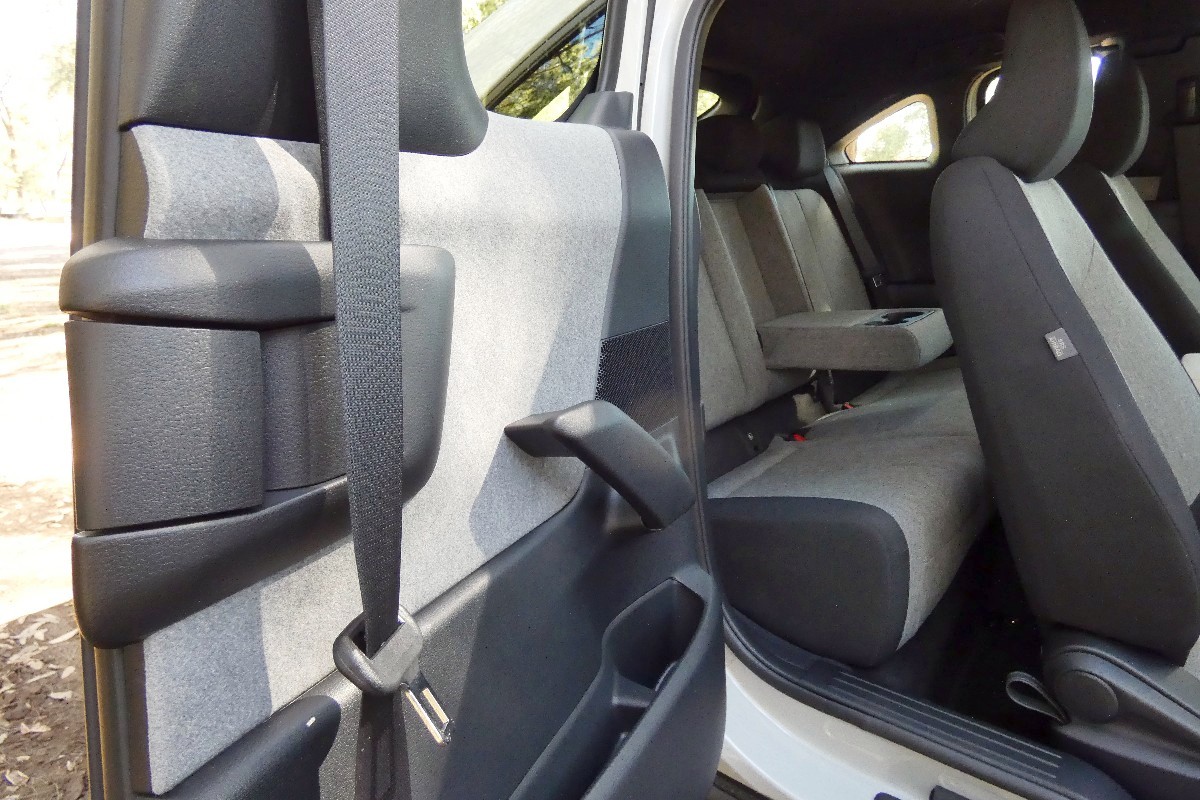 Travelled 41km. The car showed 106km to go with the battery at 56 per cent, and an accumulated distance of 197km.

I’d be remiss if I didn’t mention the funky cork finish of the centre console.

While it might be eco-friendly, in an Ikea sort of way, I have some concerns about how well it will wear over time?

I can imagine kids and/or pets picking at it, which would be the beginning of the end once its integrity is compromised. 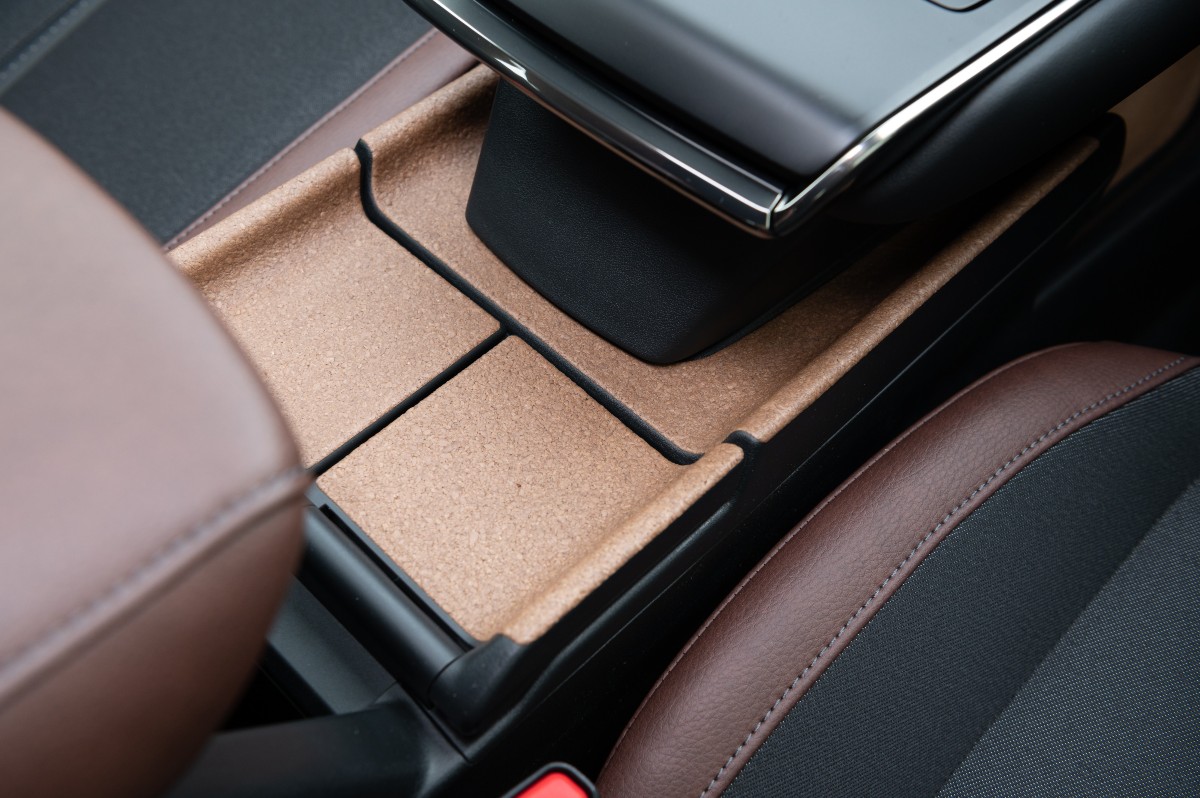 Just 12km to the shops and back. A range of 94km left and 51 per cent battery remaining. Accumulated distance 209km. 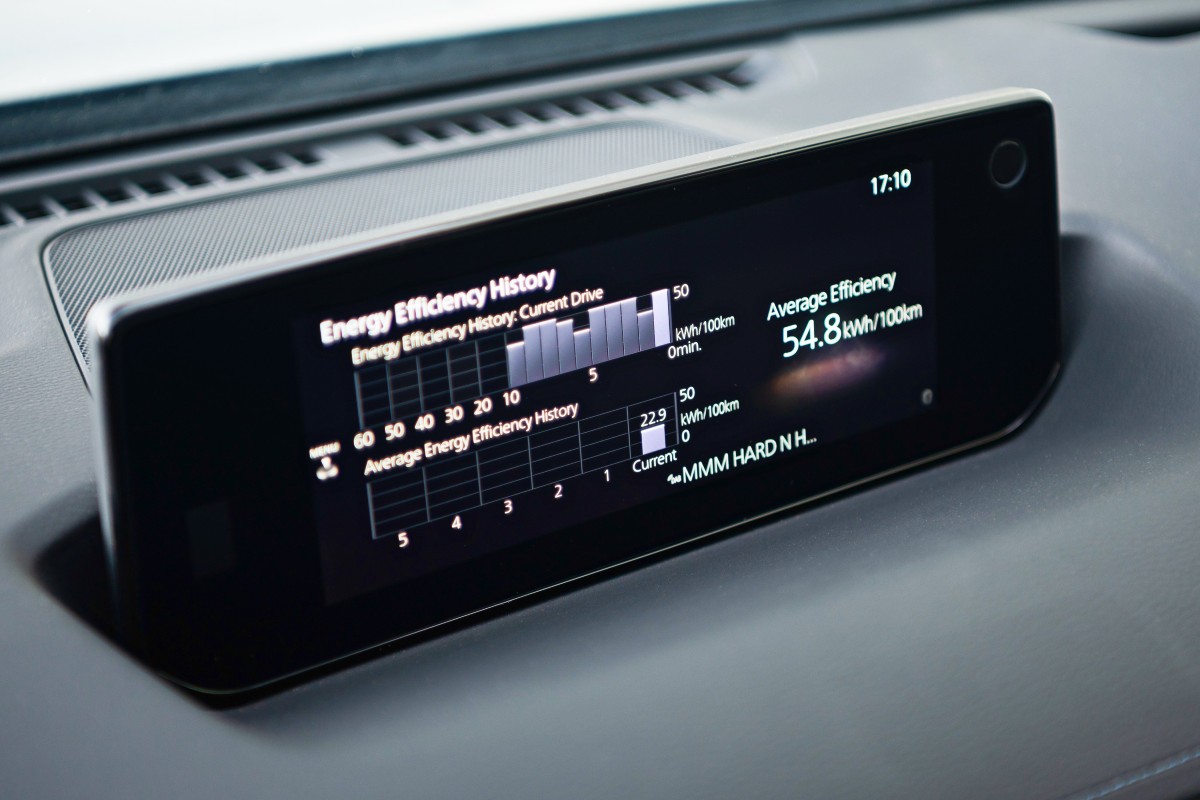 A total of 82km travelled and it was touch and go in the end.

In the evening, we had a family dinner planned and in hindsight the car really should have been charged beforehand, but sometimes one needs to push the envelope.

Travelling there was no problem. In fact, we actually picked up a couple of kilometres on the downhill run thanks to regenerative braking.

But by the time we got home, it had just 12km and 8 per cent charge left.

Did I mention that I forgot to take the charge cable with us? 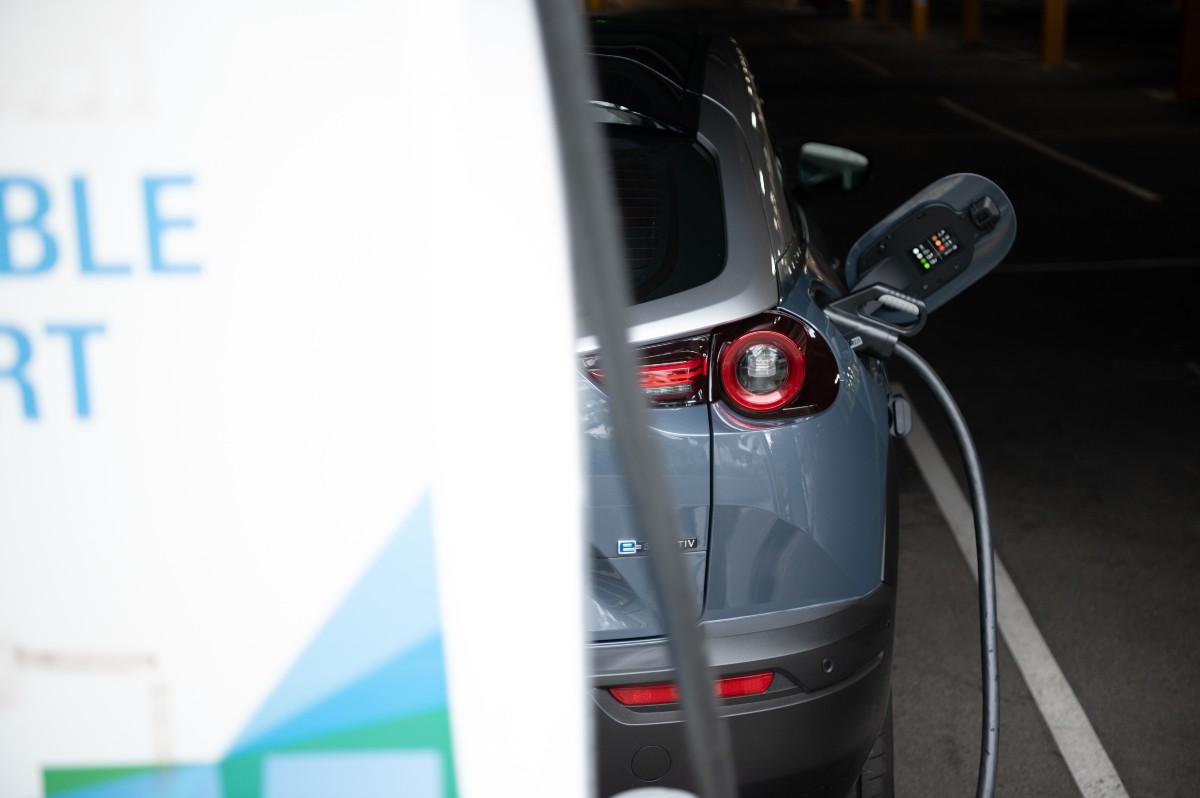 Fully charged, the MX-30 is ready to go back.

Still in two minds about the car, I invited a mate to come for the drive.

He’s a car guy and I wanted to get his thoughts, so I handed over the keys.

Bob (let’s call him Bob), had never driven an electric car and was rapt.

He and his wife own two cars, one a Mazda3 hatch.

They’re looking to update and have their sights set on a CX-5 SUV.

Bob was surprised by how quickly the MX-30 responds to the accelerator.

I explained this is because maximum torque from the electric motor is available almost instantaneously.

It’s a two-edged sword, however, because the more you plant it, the sooner the car is likely to run out of charge.

Batteries add a substantial amount of weight to the car.

But they are mounted low in the chassis which means a low centre of gravity and improved handling.

To put this in perspective, the Hybrid G20e Evolve that we drove beforehand weighs 1481kg.

Like most Mazdas the ride is firm but generally comfortable, although it tends to crash over speed humps unless you’re careful.

Steering is light and responsive, with wheel mounted paddles provided to modulate the amount of regenerative braking in five steps.

Handing back the keys, we had travelled 398.6km and had been forced to charge the car twice over the week.

In comparison, the hybrid got 7.2L/100km after a little over 400km and we didn’t have to fill it once, not that 7.2L is a great advertisement.

I should perhaps make more mention of the hybrid, but again — there a better options out there. 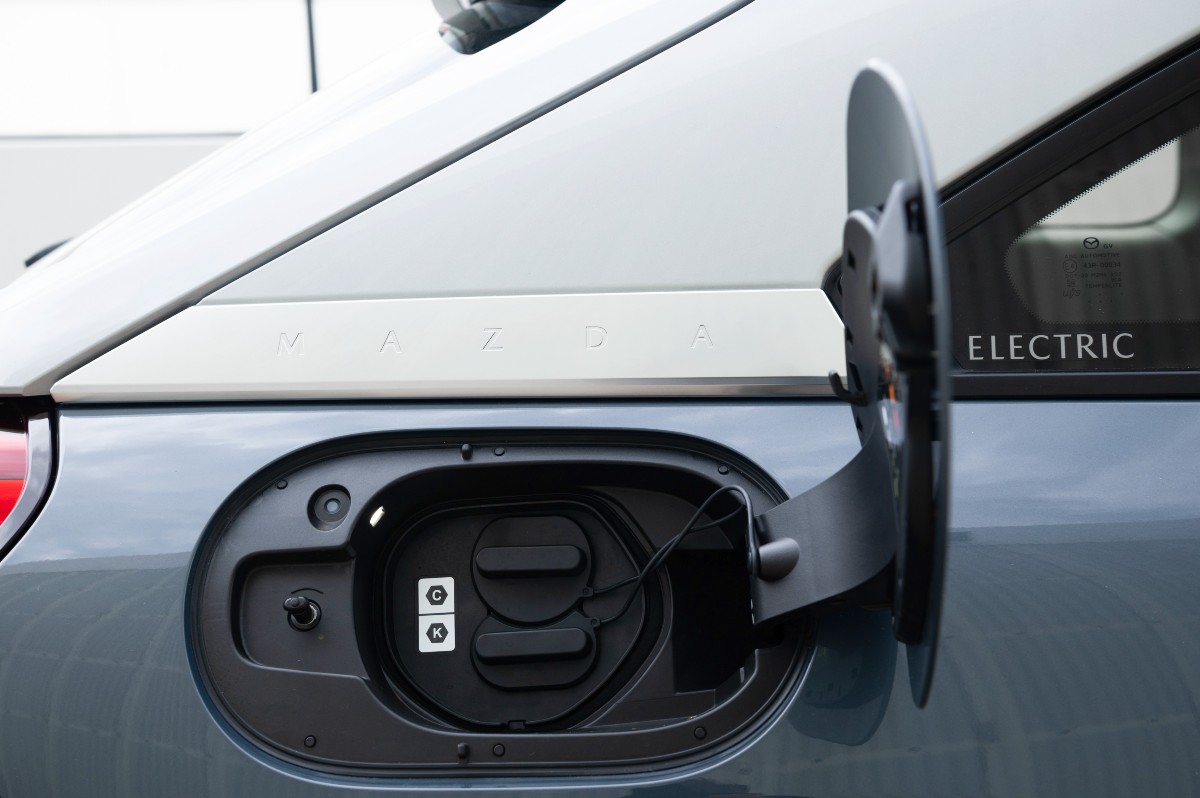 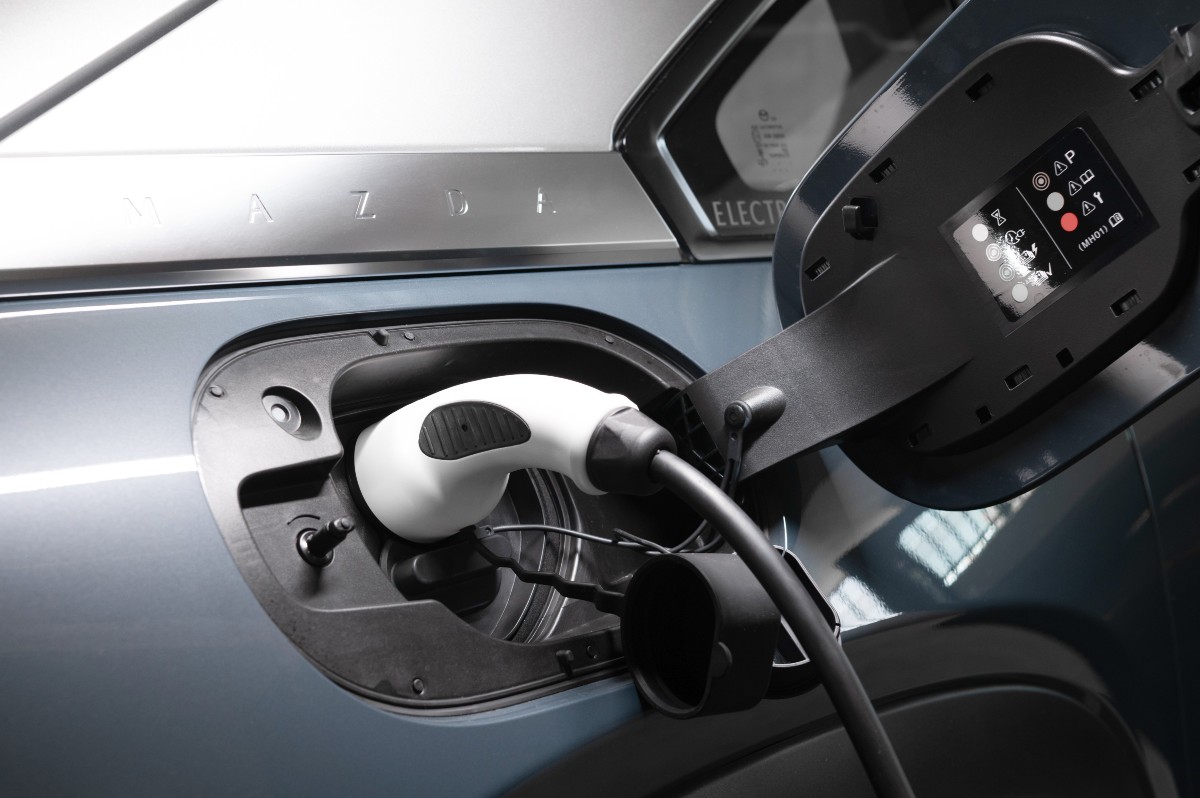 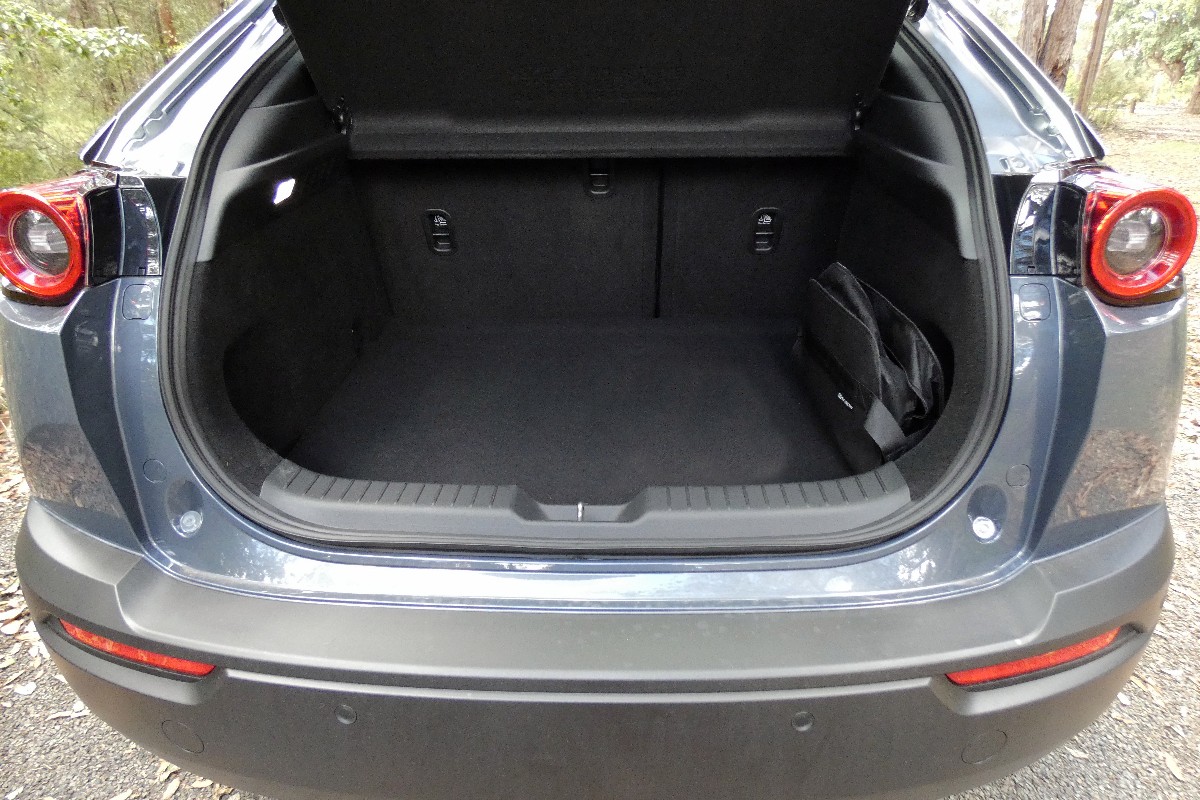 In the year just gone, it seemed like everyone wanted to know if the time was right to buy an electric car.

The interest is there, but the confidence is not — at least not yet.

Range first and foremost, because that’s the thing people worry about most.

Then price, because the more you’re prepared to pay, the further an EV tends to go — Tesla is a good example.

That’s a lot of folding money for a car that can’t get from Sydney to Newcastle on a single charge, don’t you think?

There are other options, such as Hyundai’s electric Kona which costs less and has a range of 484km.

CHECKOUT: Mazda CX-8: Get it while you can 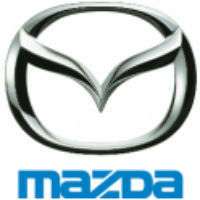 Check out deals on the Mazda MX-30