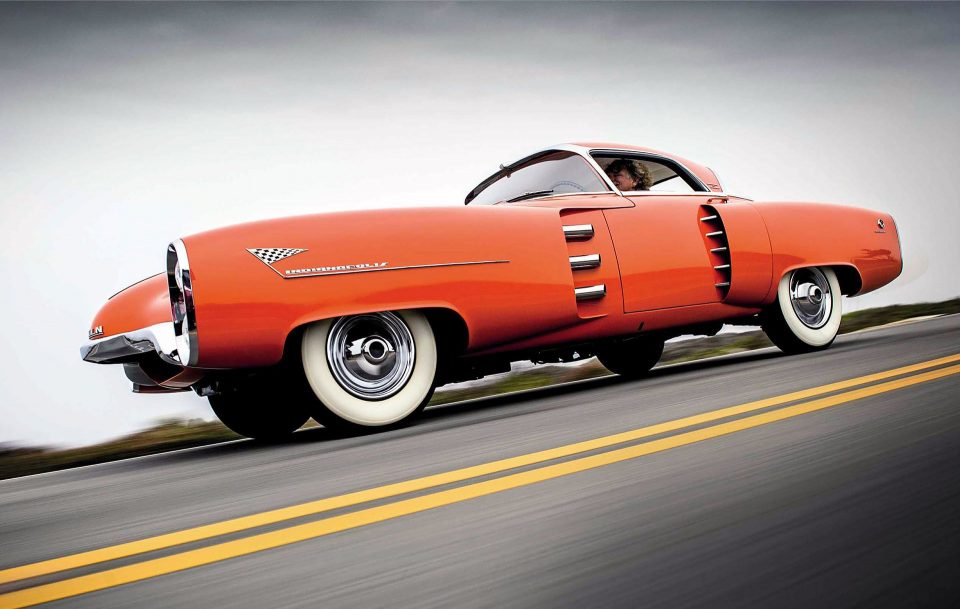 The Lincoln Indianapolis is one of the most important surviving concept designs of the 1950s.

A friend of the Boano’s, who had worked with the Ford Motor Company, suggested that he produce the car on a Lincoln chassis as a way to show off his skill and obtain work from Ford.

Painted in a nuclear shade of orange, Boano displayed the car at the 1955 Turin motor show, where it caught Henry Ford II’s eye.

He bought it on the spot and had it shipped home to Detroit for his personal use.

It also caught the attention of Auto Age magazine who put it on the cover of their November, 1955 issue asking: “Is this the next Lincoln?”

Boano’s design theme reflected jet aircraft with a body that tapered at each end between pontoon-like mudguards.

There were non-functional exhaust and cooling intakes, and a glass canopy similar to those on fighter jets.

The grille was replaced by an air opening under the front bumper.

The interior was wrapped in fine leather, with a console that divided the bucket seats.

All of the dials and controls were hidden behind a metal fascia which slid below the dashboard when the driver wanted to see the dials.

The chassis and running gear came from a 1955 Lincoln, as did the V8 engine.

Boano body work  was mounted on the latest Capri chassis, which was the final year of the first generation.

It used a central beam chassis with double wishbones at the front and a live rear axle.

The push-rod V8 was mated to Ford’s own Turbo-Drive three-speed automatic gearbox.

Legend has it that Henry Ford II gave the car to his pal, actor Errol Flynn — to drive for a while.

It was sold and resold a couple of times and finally ended up with classic car collector Tom Kerr who recognised its importance as a one-off piece of design history and had it restored.

After the restoration Kerr returned the Indianapolis to the classic car show circuit before he later sold it.

And did Boano get his offer of work from Ford?

Yes, he did, but chose to work for Fiat instead — where he penned the Fiat 600.