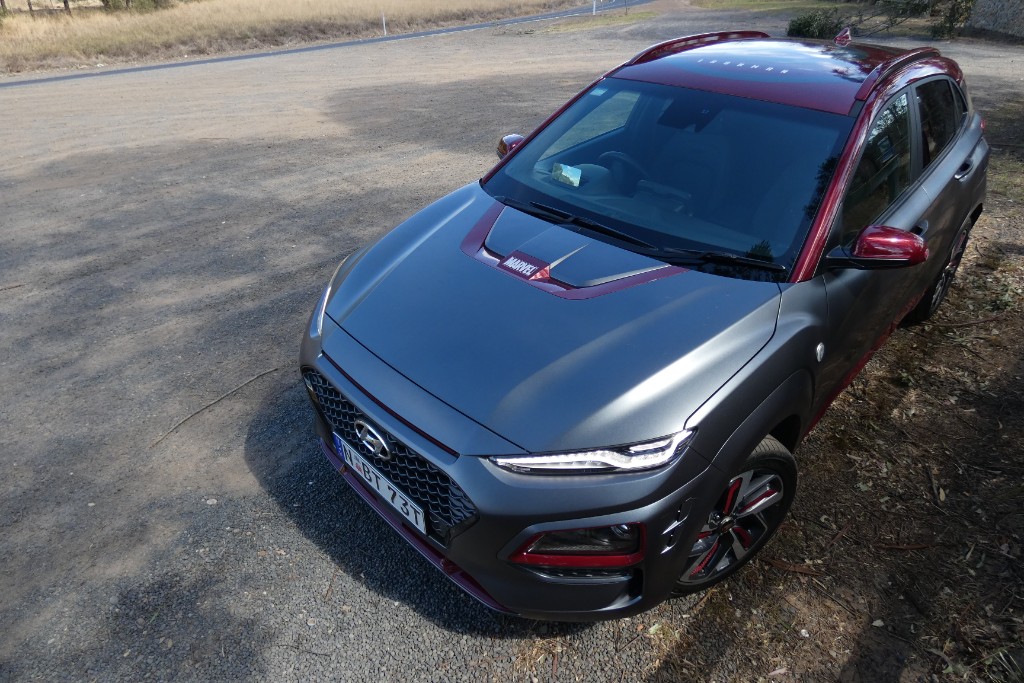 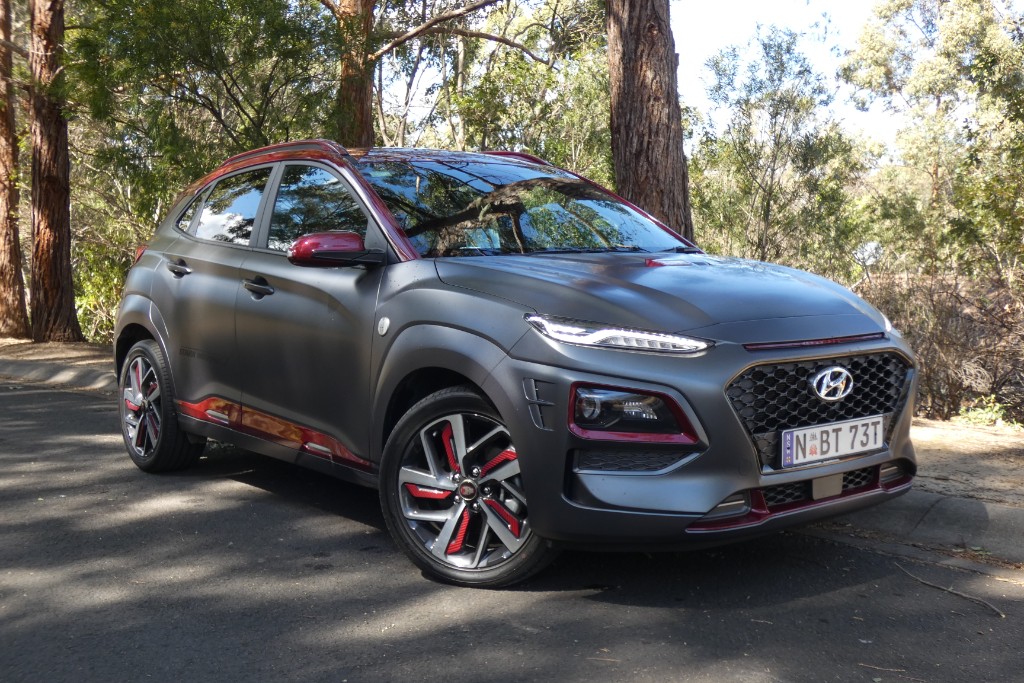 You’re gonna laugh. When Hyundai announced the Kona Iron Man Edition, I immediaterly thought they were talking about Ironman as in triathlons.

The car is after all named after the popular Kona district in Hawaii where they hold the World Ironman Championships.

I was expecting decals, roof racks and a rubber boot liner for wet gear after a day at the beach.

The Iron Man edition draws its inspiration from the Marvel Ironman movie franchise, with lots of references to Tony Stark, Stark Industries and the indestructible Ironman suit.

It’s part of a deal to promote the movie  Avengers: Endgame, although we can’t imagine fans ripping out to buy one on the strength of the association.

It’s kinda cool thought and for mine you could leave the body kit and just remove the Iron Man stuff, because it’s the only model in the lineup that manages to rise above the abundance of grey plastic cladding that ruins the look. 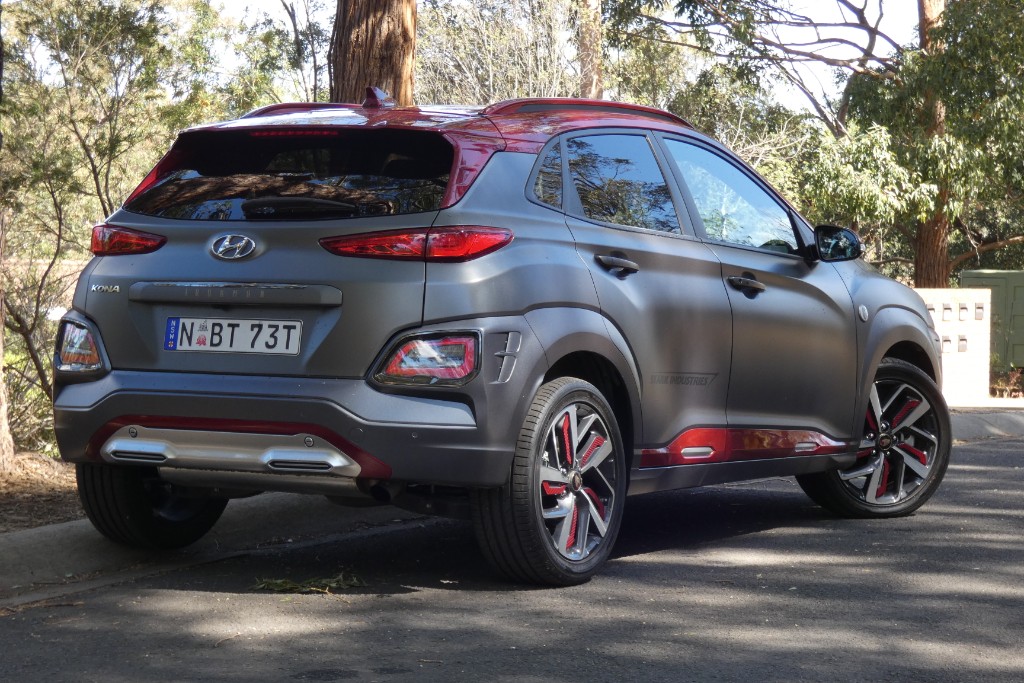 This excludes the extravagantly priced Kona Electric that starts from $59,990.

Launched in February, the run is limited to 400 examples, but we’re not sure how many are left?

Based on the Highlander (with some differences), it adds bespoke features such as matte grey and “Iron Man red” exterior paintwork, bespoke Iron-grip dual-tone 18-inch alloys, and Iron Man emblems for the front guards and puddle lamps.

The bonnet has also been redesigned, featuring a red bonnet bezel with Marvel logo.

The Iron Man theme continues inside with red stitching and piping on the leather seats.

The heated and ventilated front seats feature a stitched STARK Industries logo and Iron Man image on the backrests.

The tacho and instrument cluster also feature the STARK Industries Arc Reactor as background graphics, as does the leather wrapped and red stitched gear lever.

Tony Stark’s signature even adorns the dash above the glovebox. 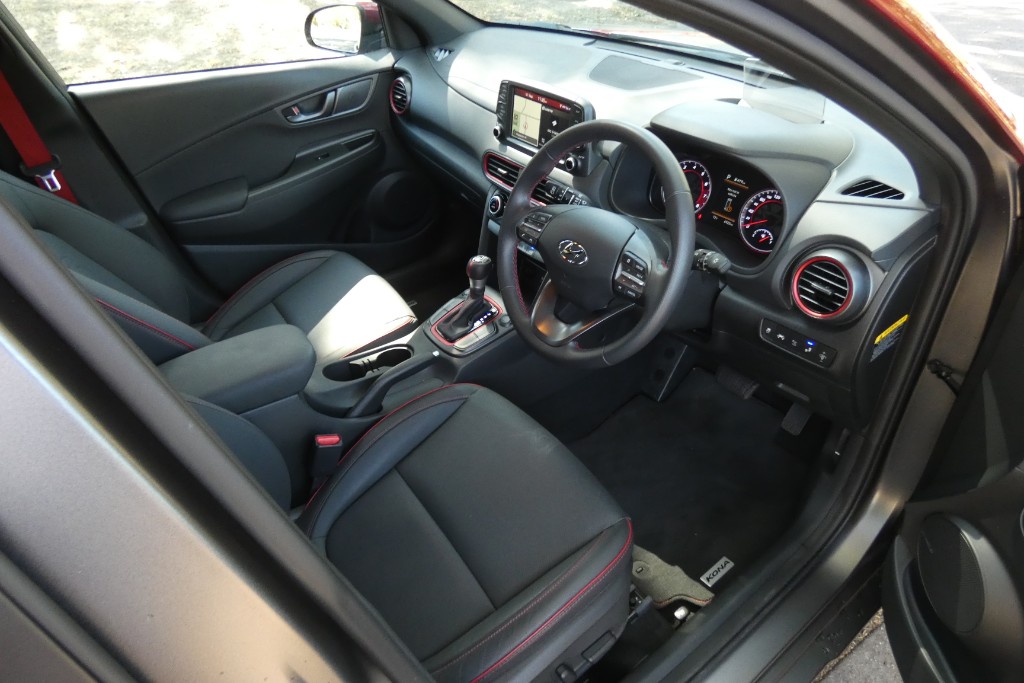 With 130kW on tap the Kona sparkles.

It’s reponds eagerly to the throttle, with something of a snarl from the four cylinder engine under hard acceleration.

There’s Comfort, Sport and Eco drive modes to choose from, but we were disappointed to find no gear change paddles. You can however change gears manually using ther transmission lever.

The seats are supportive and comfortable, with leather trim and single temperature climate air conditioning.

The Head-Up Display is of the cheaper kind, with a small plastic screen that is deployed when you start the car.

That’s not such a bad thing as it has the advantage of being clear and easy to read (and legible with polarised sunglasses).

On the downside the overall feel is spoiled by the cheap, plastic ambience of the cabin and the insubstantial feel of the car out on the road.

Remember too, this is a small SUV, and as such rear legroom is tight and the luggage area is quite small — so remember to check these out if you’re attracted by the package.

It’s a robotised 7-speed twin-clutch style auto and that means the usual idiosyncracies.

It will bang through the gears in rapid succession in a straight line, but slowing down and speeding up can confuse the system — as can changing from reverse to foward gears.

Suspension is Mac strut at thre front and a multi-link setup at the back, with 18 inch alloys and 245/45 rubber, with a space saver spare.

Despite local suspension tuning, the ride can be brittle at times and although it can be pushed reasonably hard with confidence, it gets out of shape too easily.

The steering is a little dead off centre, but the brakes are excellent — Kona clearly has its limitations.

Because of their design, it is impossible to remove the mats with tipping them backwards and emptying everything on to the floor. 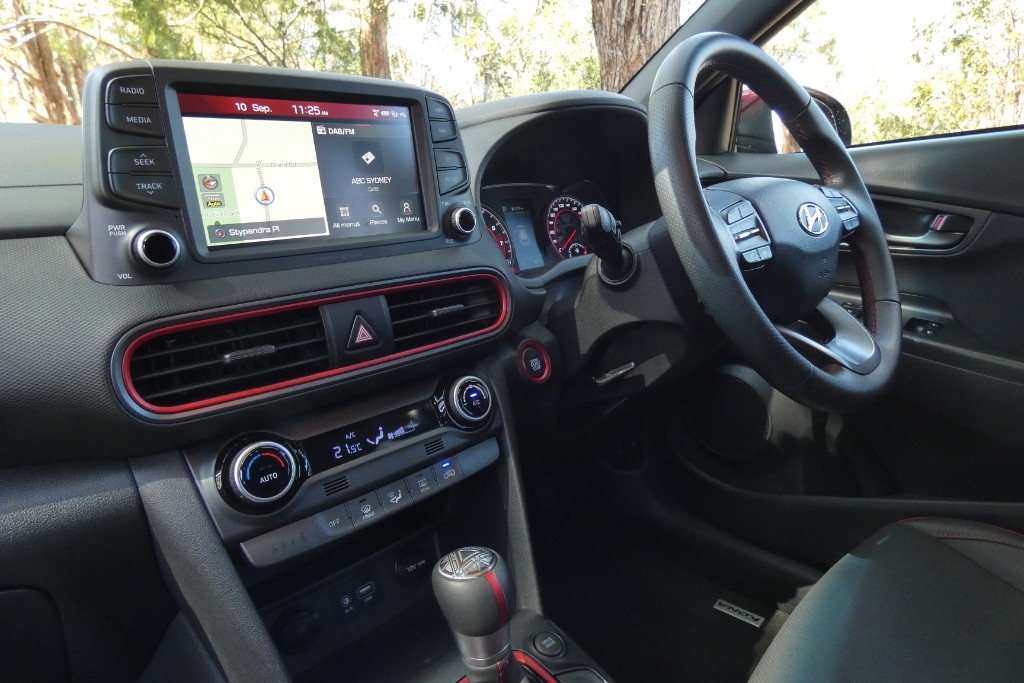 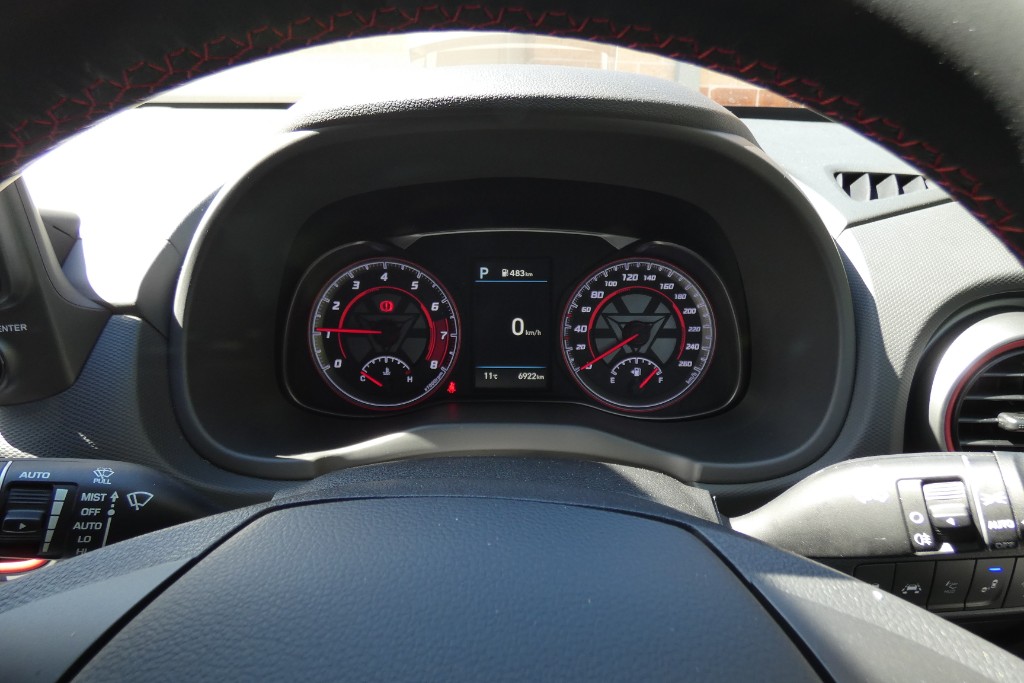 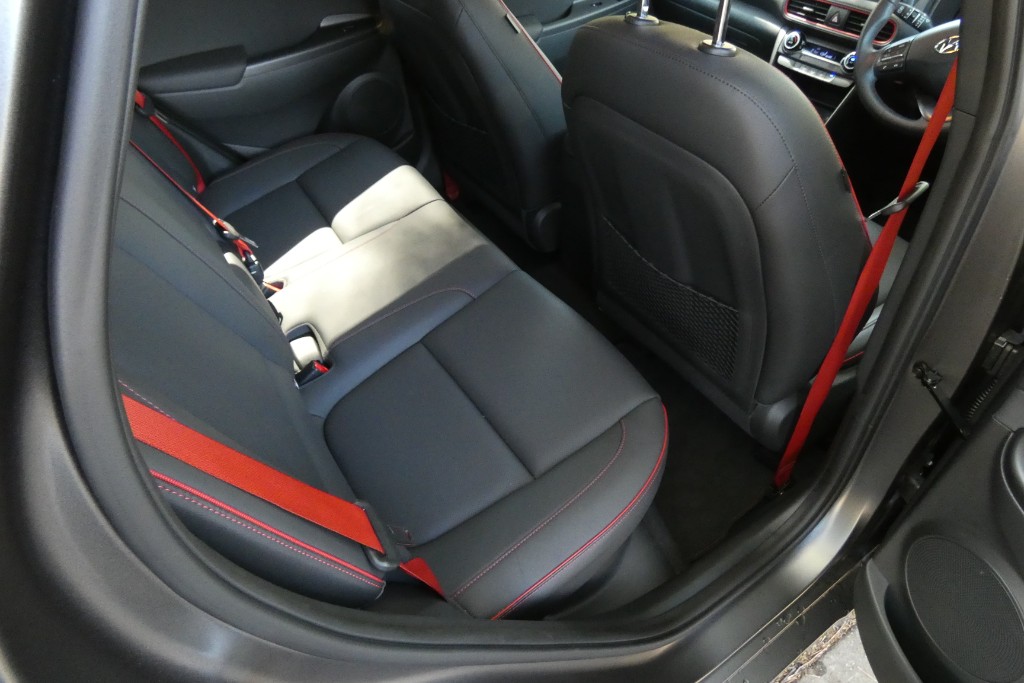 We can take or leave the Ironman bits, but like the overall styling.

If you think the look of the Kona is interesting, wait until you lay eyes on the new, smaller Venue that seems to be a product of the same imagination.

Talk about polarising. Not sure we like this new, post-Schreyer direction . ..  but styling of course is a very personal thing. 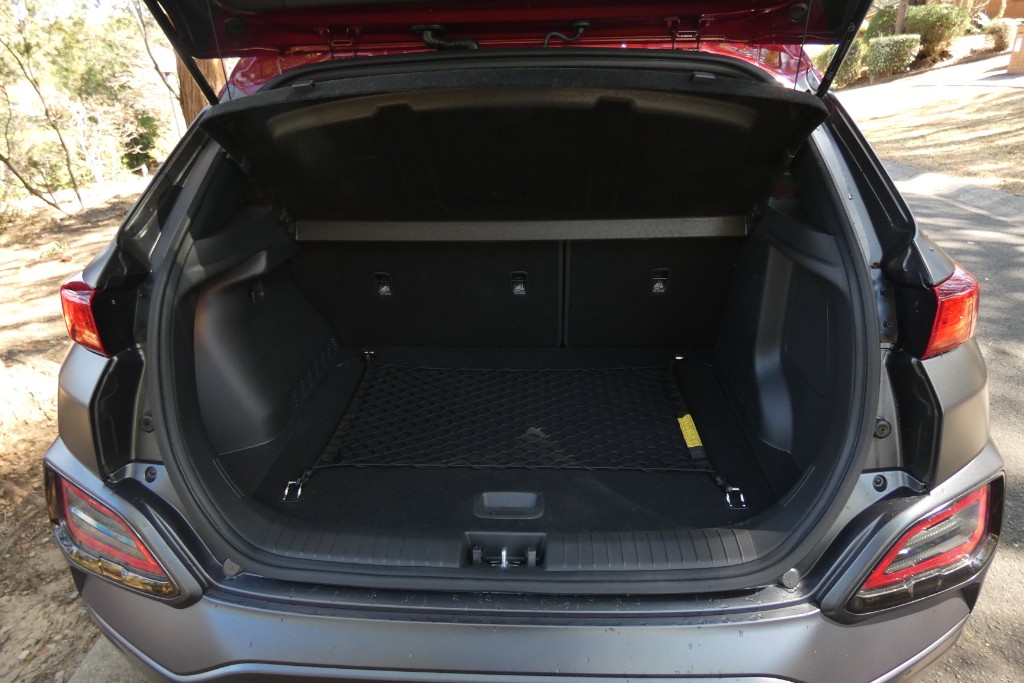 CHECKOUT: Charles in clover over Kona

Check out deals on the Hyundai Kona