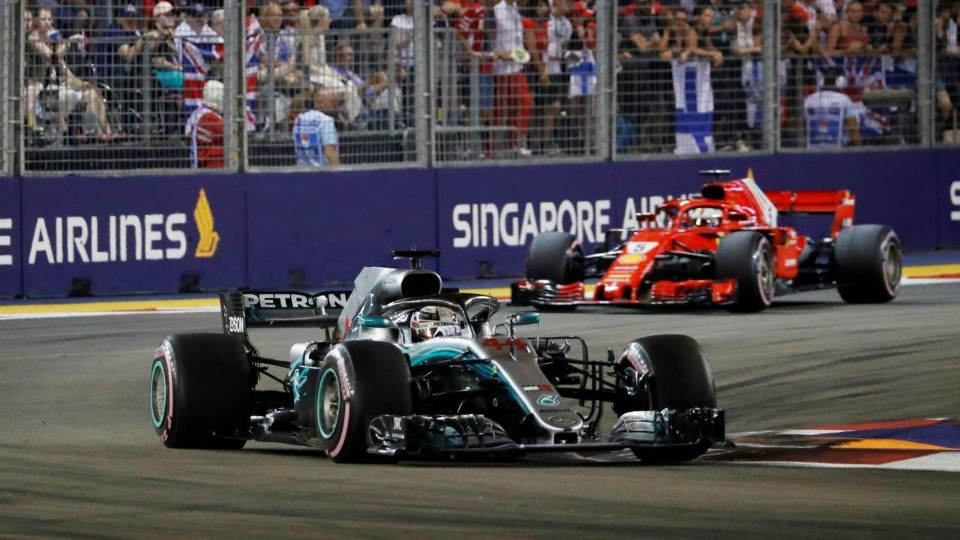 It was an easy victory for Mercedes driver Lewis Hamilton in Singapore last night after a tactical blunder by Ferrari cost Sebastian Vettel the chance of victory.

Vettel had to settle for third place behind Red Bull’s Max Verstappen while Australia’s Daniel Ricciardo started and finished sixth.

It was a fairly processional affair on the hot and brightly-lit 5km, 23-turn street circuit with the top six finishing in the order they started.

At 61 laps, or 309km, Singapore is the series’ longest race, and the most difficult for overtaking.

There were early concerns that the fragile hypersoft tyres the top 10 started on might require two pit stops, but they managed with just a single change of rubber for the duration.

The safety car came out soon after the start when Sergio Perez pushed his Force India teammate Esteban Ocon into the wall at Turn 3 and after the wreck was removed the top 10 continued in grid order: Mercedes’ Valtteri Bottas in fourth followed by Kimi Raikkonen’s Ferrari, Daniel Ricciardo, Perez and Romain Grosjean in the Haas.

Ferrari called Vettel in for a set of ultrasoft Pirellis on lap 14, but it was badly timed and he emerged behind Perez and spent two laps bottled up behind him.

Then he lost his second place to Verstappen who had a blinder of a pit stop to emerge a whisker ahead of Vettel — and stayed there for the rest of the race.

The main interest centred on the battle for fourth place as Ricciardo closed in on Raikkonen, with both gaining on Bottas.

But nothing came of it and Bottas crossed the line a second clear of Raikkonen’s Ferrari with Ricciardo 0.9 of a second astern.

Fernando Alonso had a great run for McLaren, coming from 11th on the grid to claim seventh.

He had a long first stint on the ultrasoft tyres gained places at the expense of Perez, Grosjean and Renault’s Carlos Sainz, who finished eighth.

Ninth was Alfa-Sauber’s Charles Leclerc, while Renault’s Nico Hulkenberg put in a good drive to take the final championship point in 10th.

Oddly, the fastest lap was set by Haas driver Kevin Magnussen, who ended up second last in 18th place.

Hamilton’s win  extended Mercedes’ lead in the Constructors’ Championship to 37 points and Hamilton’s had over rival Vettel to a significant 40 point margin in the Drivers’ standings.

“Great job everyone, what a weekend,” a tired Hamilton told his team over the radio  after taking the chequered flag.

Max Verstappen was analytical: “I had a few driveability issues again behind the Safety Car and pulling away from the pit stop was dreadful, but in the end we managed it well and taking second place today is an amazing result.”

Vettel was a tad grumpy, mumbling that “we didn’t come here expecting to lose those 10 points (for a win). But there’s a long way to go and a lot of points out there.”

It was a frustrating even for Ricciardo.

“We tried something different by going long on the hypersoft (tyres) and we had good pace but a street circuit is only really great if you are on pole, otherwise it’s not only hard to overtake but even to follow,” he said.

“I hope in Russia everything will fall into place. We’ll keep fighting, try to get better and maybe we can get a win at a circuit where we don’t expect it.

“Now I’ll jump into the ice bath and cool down.”