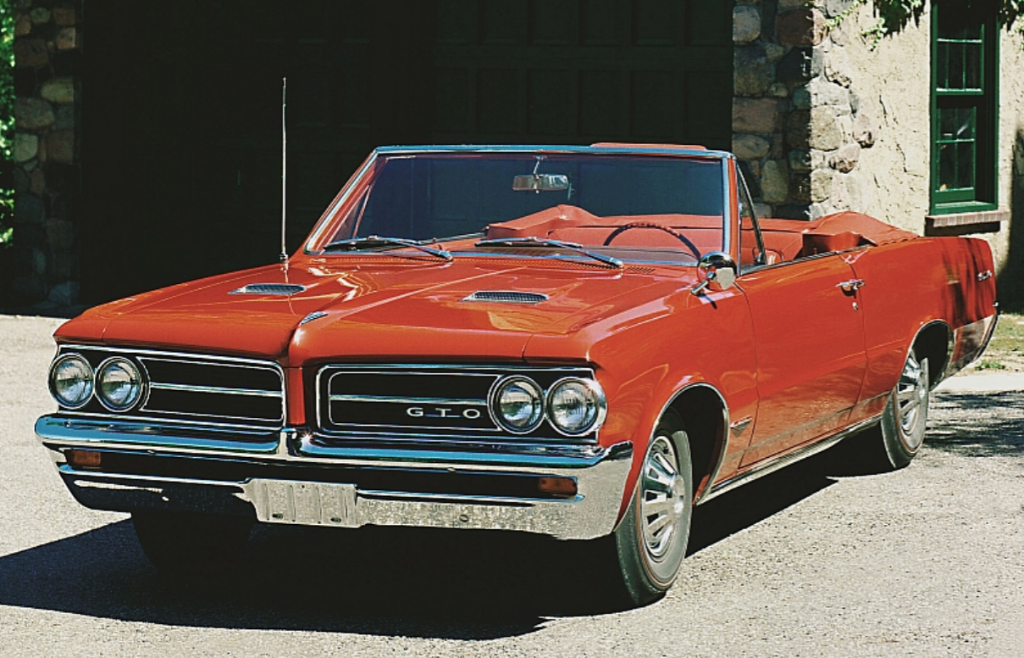 Pontiac’s GTO is credited with starting the muscle car revolution.

The GTO was born out of a time of cheap fuel and dreams of high horsepower.

In the leadup to 1964, America’s car companies had been engaged in a horsepower war with each other.

All of it was focused on getting Detroit’s full-sized cars down the quarter mile in the shortest possible elapsed time, in order to win bragging rights on and off the track — and importantly in showrooms.

They were building a performance image for the brand and went to extraordinary lengths to ensure their cars were quick.

So, they slipped a massive 421 cubic inch V8 (that’s 6.9 litres) into their 2.5 tonne Super Duty Catalina coupe and sat back while young gents delivered smokin’ 0-60s in a jaw dropping 5.4 seconds on skinny cross-ply tyres.

And then guys at Pontiac had an even better idea. They decided to put the big engine in an even smaller, mid-sized car.

Many folk give Pontiac advertising executive Jim Wangers the credit for inventing the idea.

Wangers himself tells a slightly different story in one of his books.

“I came into the project only as a marketer,” he said.

“What really happened was that Pontiac chief engineer, John De Lorean, held regular ‘what if’ sessions at the GM proving grounds in Michigan.

“The birth of the GTO took place during one of these sessions,” he said.

“One of the engineers, Bill Collins, remarked to De Lorean: ‘You know, it would take us about 20 minutes to slip the bigger 389 cubic inch (6.5 litre) V8 into this thing.”

One week later they were back at the test track with the bigger motor fitted.

Needless to say, those who drove it were overwhelmed.

And the rest, as they say, is the stuff that dreams are made of.

Quite simply, the GTO is the benchmark by which all muscle cars are measured and will continue to be measured.

CHECKOUT: So, what car does David drive?