Thirty-five years after his death at Calistoga and 20 years after his induction into the Sprint Car Hall of Fame, we look back at the wild, colourful life and career of Gary Patterson . . . a genuine outlaw racer.

Gary Patterson – aka The Hostile Hippie, The Preacher, The Racing Reverend or the self-appointed Great GP – decided early in life he didn’t like authority.

After a spell in the services and a stint in gaol for belting a belligerent drunk in a bar, GP was racing often and successfully around California when he had his first confrontation with the then almighty United States Auto Club (USAC), with which he had been competing sporadically in a midget.

Said Patterson, “It’s not just USAC. I don’t like any clubs. They’re all loaded with rules, politics, binding schedules and too much crap. I don’t want to be regulated or forced to run a schedule. I’ll race where, when and for whom I please.”

He could talk big, but mostly backed up his words with actions.

Patterson was a gent of two personalities. Away from the track he was quiet and quietly spoken, but when he dragged on the Nomex and Bell helmet, Dr Jekyll became Mr Hyde.

He was truly independent, with no wife, no sanctioning group, no manager, no promoter and no personal sponsors to corral him into compliance.

GP was a plug-in steerer of anything with wheels. Though one of the best-known sprint car racers ever, and winner of countless races, his CV was not spilling with blue-ribbon victories.

Too often he had to settle for second-rate equipment along a career path determined by wanderlust, curiosity and promoters’ start money.

He raced to put bread and whisky on the table, not for trophies or glory.

GP was about uncompromising, wheel-to-wheel racing, with a modest cheque as his reward.

Car owners knew when they put Patterson in their cars they would learn just how fast their midget or sprint car could go. On occasions, if a car owner or track promoter embellished the quality and competitiveness of the machinery, serving up a machine unworthy of his endeavours, GP might just turn hard right and put it into the wall — in silent yet clear protest.

Though based in Stockton, California, the racing nomad’s home was a cheap motel near whatever speedway he was racing at.

Patterson raced in Australian most summers through much of the 1970s, driving super modifieds, sprint cars, midgets and occasionally even a type of racecar he didn’t much care for — those with doors and fenders.

On his first tour of Australia in 1970-71, the long-haired mustachioed Patterson was tagged the Hostile Hippie by Liverpool Raceway promoter Mike Raymond.

Though hardly a God fearin’ man, he also had a very tenuous connection to the Universal Life Church via a mail-order divinity degree from a friend.

The tough, nomadic Patterson, one of the original wild men, was an unforgettable character and racer. He was a great driving talent but more because of his intensely competitive nature, and often unpredictable antics.

He always produced reactions from the crowd. Always.

With Raymond and  flamboyant Queensland promoter Ron Wanless prodding him along, Patterson loved to fire up Australian crowds by calling the Aussie racers ‘amateurs’ and their racing cars ‘museum pieces’.

On a subsequent Australian and New Zealand tour in 1973-74, he hooked up with fellow American racer, the late Larry Rice.

The more conventional Rice was an ex-school teacher and US midget champ.

“The first time I saw Patterson in Australia he looked so mean I didn’t even have the nerve to talk to him,” Rice once reminisced.

The imaginative Raymond promoted the double act as The Preacher and The Teacher. The Odd Couple perhaps. But despite their very different personalities, the two became great mates.

In 1974-75, the two friends won every midget race they entered. According to Larry, “I was in a VW and he was in a Sesco, and he could run as fast in that Sesco as I could in the VW nearly everywhere we went. That’s when I first realised he was some kind of race driver.

“He was one hell of a race driver who never really got the recognition he deserved. I raced with him a long time and I’ve raced with a lot of people, but Patterson was as good as any driver I’ve raced with or against anywhere!”

More from Rice:  “I admired him because he could do everything that I really deep down wanted to do but didn’t have the nerve to. He just did and said what he wanted and if people accepted it that was okay and if they didn’t that was okay, too!”

Their friendship led to a legendary story which started when Rice pulled a sweet young Sydney gal with very old fashioned values. She claimed to be a virgin and wanted to save herself for her wedding night.

After some negotiation, Reverend Patterson solemnly “married” Rice and his new squeeze in a Sydney hotel room.

In Sydney Australia, his digs of choice was a room at the noisy 24-hours a day Texas Tavern in Kings Cross.

With a well-loved leather hat, earth shoes, jeans, T-shirt, Patterson was not a fashion icon. He had the word Outlaw tattooed over his ex- wife’s name on his arm.

Racing at California’s Ascot Park one night, the visiting racer kept his right rear tyre covered secretively with a tarp, before heading out to set third quickest time.

The local heroes, desperate to see what unfair advantage Patterson was running, tried knocking the cover off the tyre. When they finally succeeded in catching a glimpse, they discovered it was an old Firestone with a normal groove on one side, and on the other he’d carved the succinct message “Bite My Ass”.

Patterson raced on all sorts of ovals from tiny bullrings to one milers, dirt or asphalt. California’s half-mile Calistoga Speedway was one of his favourites (he held the track record for non-winged sprint cars there for decades).

He lost his life at the fierce Calistoga half mile in a shunt on Memorial Day, 1983.

Eye witnesses insist Patterson took his chance with slamming the wall rather than risk taking out another driver. He was 46.

Gary Patterson was inducted into the US National Sprint Car Hall of Fame in 1998. 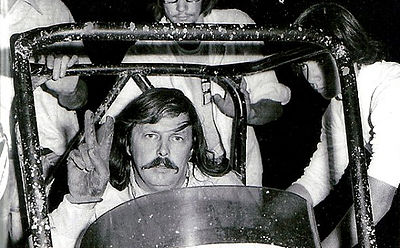 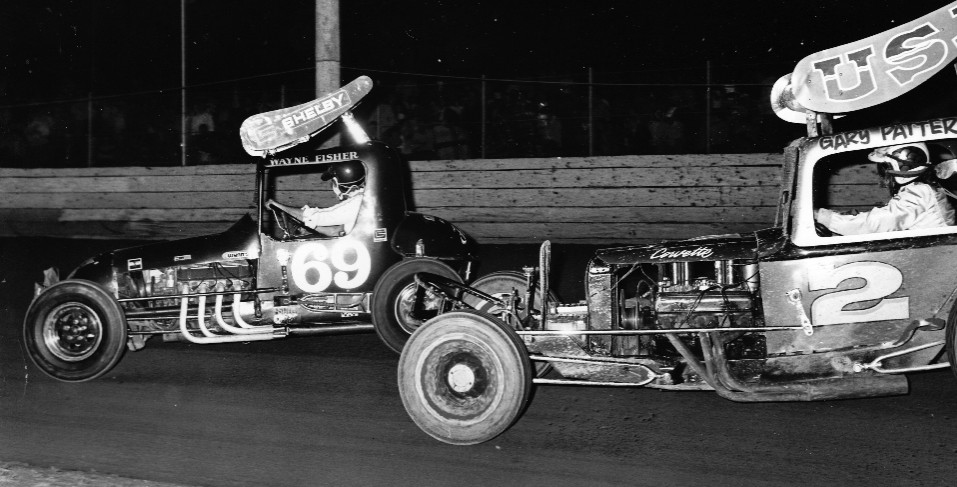 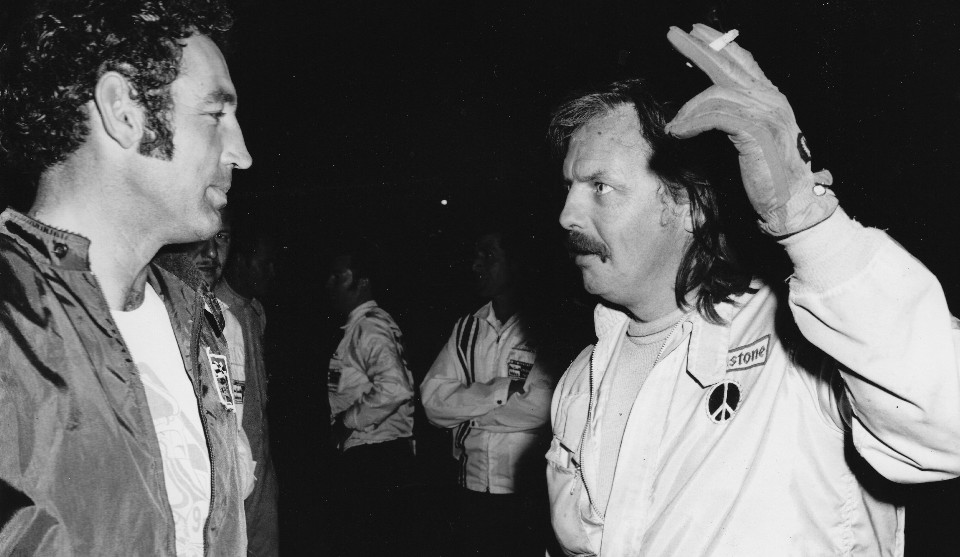 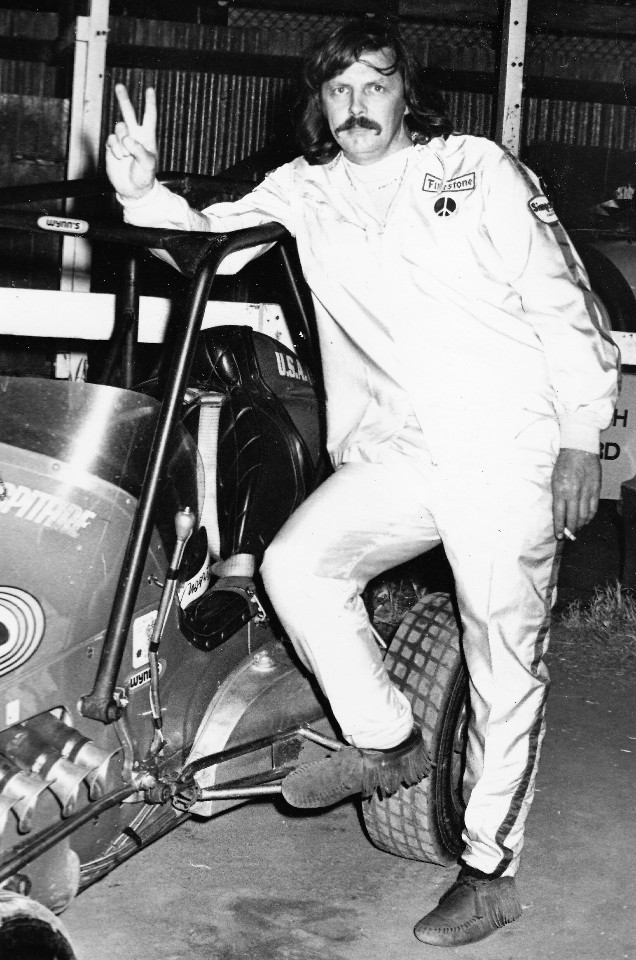 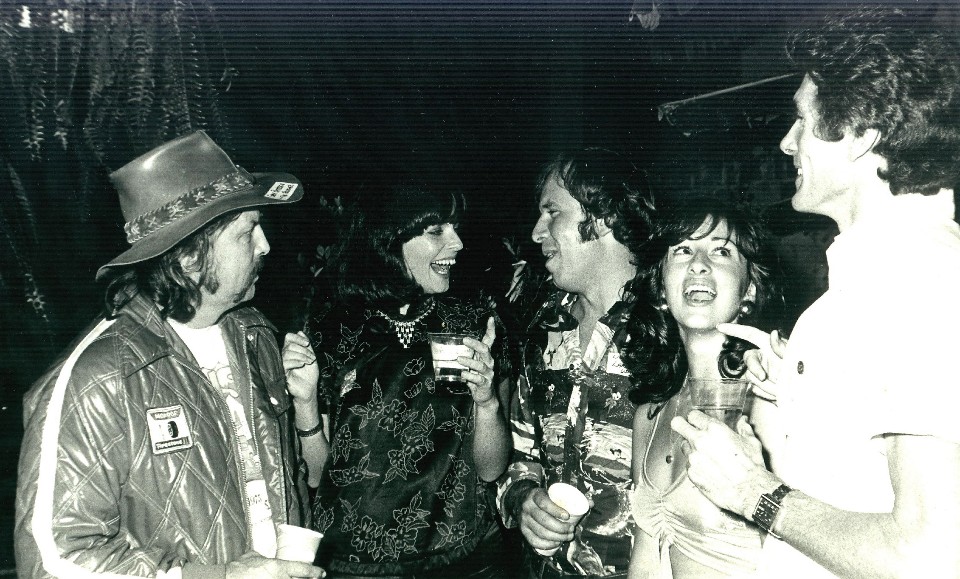 Lived in Canberra in the early 70s and went to Tralee Speedway most Saturday nights or Sunday arvos. I saw the Hostile Hippie race there a number of times. Damn good driver, winning most races he ran in there, but very volatile. One race he believed his big rival at the time, Gary Rush from Liverpool, had put him into the fence. He waited on the side of the infield, helmet in hand, and when Rush went past again, he threw his helmet at Rush. Hit the car but it apparently shook Rush up a bit. Track officials weren’t pleased… Read more »