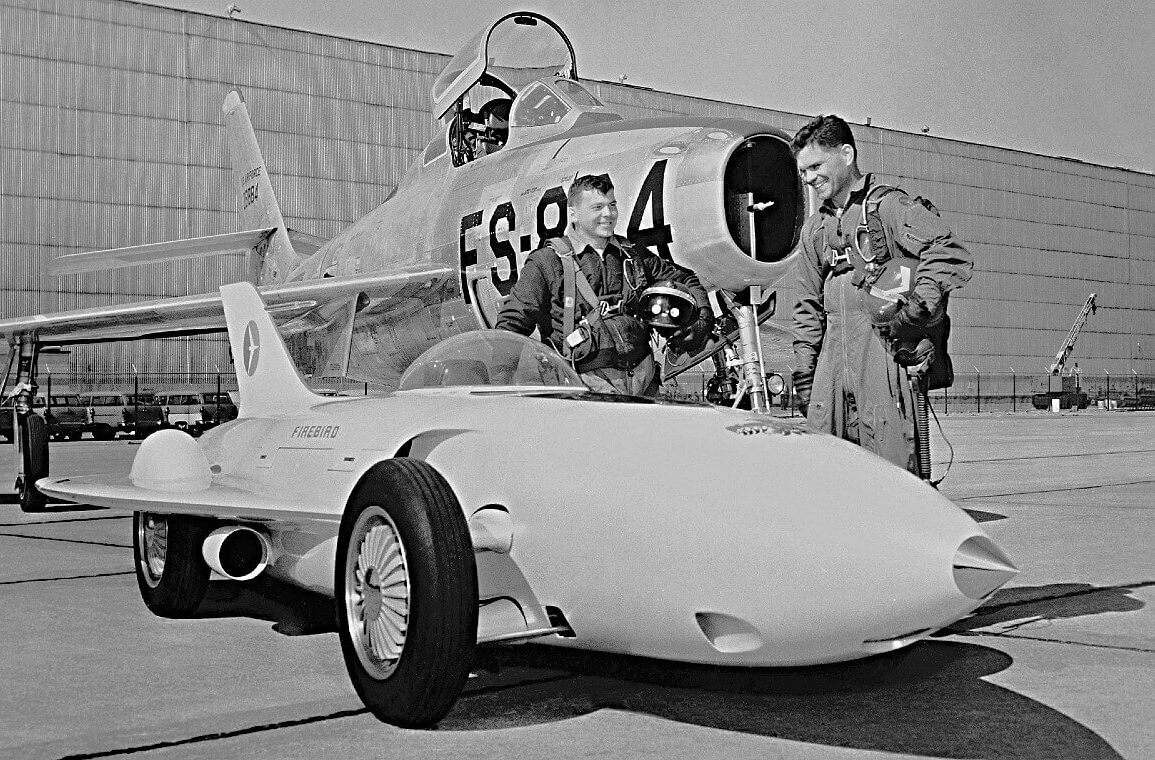 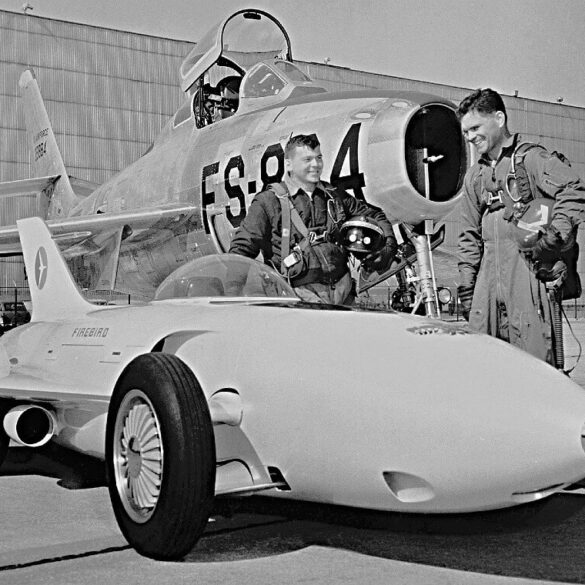 When it was displayed at the 1954 Motorama, GM made it clear that the car was a design study created to determine the practicality of the gas turbine for use in future vehicles.

GM’s styling chief, Harley Earl, made the decision to initiate development of the Firebird I in the styling department rather than the engineering department.

He took styling cues from the Douglas F4D Skyray jet.

The jet engine, called “Whirlfire Turbo-Power” by the PR folks, was developed under the direction of Charles L. McCuen, then general manager of GM Research Laboratories Division.

Unlike a jet airplane, which develops thrust through the action of exhaust gas through a tailcone, the Whirlfire Turbo-Power engine propelled the Firebird 1 through a power turbine acting on the rear wheels via a transmission.

But, tests showed it was not a practical alternative to an internal combustion engine (ICE).

Once the turbine started revving, power eventually exceeded that of a typical 1954 V8, but response was sluggish below 18,000 rpm.

The jet engine was way too loud and the exhaust temperature at the tailpipe was 1000 degrees Fahrenheit (538 degrees Celcius).

Not what you want while making a run to the local Maccas.

But it was a sensation at the Motorama and demonstrated GM’s technical and styling prowess.

I’ve seen the Firebird 1 on a number of occasions when visiting GM’s Heritage Centre in Michigan, USA.

It is a stunning vehicle.

Photos of the car do not do it justice.

It is a jet fighter on four wheels, with truncated wings and actual air brakes on the trailing edge of the wings.

The interior is spartan.

The jet engine sits just behind the driver.

Back when it was first released, GM hired former Indianapolis 500 winner Mauri Rose to test it.

But, before Rose got to open up the throttle, McCuen decided to do a little testing himself at the GM Proving Grounds near Milford, Michigan, on its high speed banked oval.

But McCuen was no test driver.

He found himself going way too fast and lost control.

The car went under the guard rail, rolled and ended up in the grass on the other side.

The body was totalled.

He spent months recovering in hospital and took early retirement in 1956.

It is said that two factors made the Firebird I’s performance unpredictable.

Second, the narrow and tall wheels and tyres raised the centre of gravity, thus making the car more unstable at high speed.

You can see all of them at GM’s Heritage Centre, in Sterling Heights, Michigan.

CHECKOUT: Too many cooks spoiled the Marina