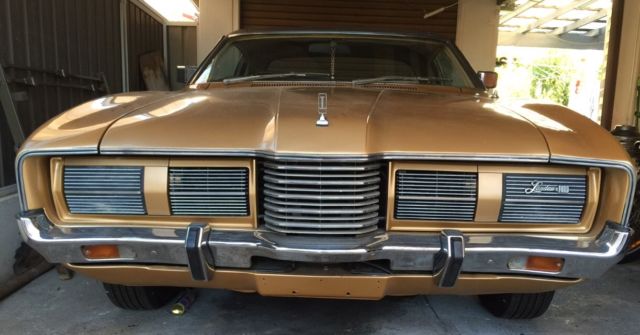 Ford’s luxury Landau coupe, and Australian version of the Thunderbird, had so much stacked against it when it was released in 1973.

For a start, sections of the motoring media disliked it, and were not afraid to say so.

In the January 1974 edition of Wheels magazine, the writers held nothing back, labelling the Landau “useless”.

“Fitting a spring-loaded bonnet emblem like a Mercedes-Benz doesn’t create and instant legend and nobody is going to be fooled into believing it means the Landau is equal to a Benz, “ they said.

The production quality was also challenged.

Wheels ran a photo of the vinyl roof peeling off the lower edge of the rear pillar on its test car.

Ouch! No doubt some robust words were spoken and fingers pointed back at Ford when they saw that image.

Another burden the Landau had to bear was that the market for a luxury “personal” car in Australia was, at best — a just a small niche.

Plus, the popularity of big two-door coupes had well and truly peaked at the time of its release.

So it is no surprise that only 1385 were sold during its three-year production run.

Landau was developed alongside of the long wheelbase LTD, at the insistence of Ford’s then Managing Director, Bill Bourke.

Using the Falcon hardtop as a base, Ford applied luxury fittings to every nook and cranny of the car.

The rear pillar was redesigned for a more close-coupled “Thunderbird” look.

At one point in its development, the back of the front seats gained aircraft-style tray tables, as if to suggest to those folks who managed to cram  themselves into the rear seats could sip cocktails — or even do some paperwork while they were so ensconced.

Remember, this was in those carefree days before hand-held devices were invented.

The engine was the 5.8-litre (351 cubic inch) V8 and in an Australian first, four-wheel disc brakes were standard.

And so they ought to have been, because the price of the Landau was an eye-watering $6950, at a time when a base Falcon hardtop was less than half that price.

As with so many slow selling automobiles, in the 21st Century the Landau is now a prized classic and unmolested examples are much sought after.