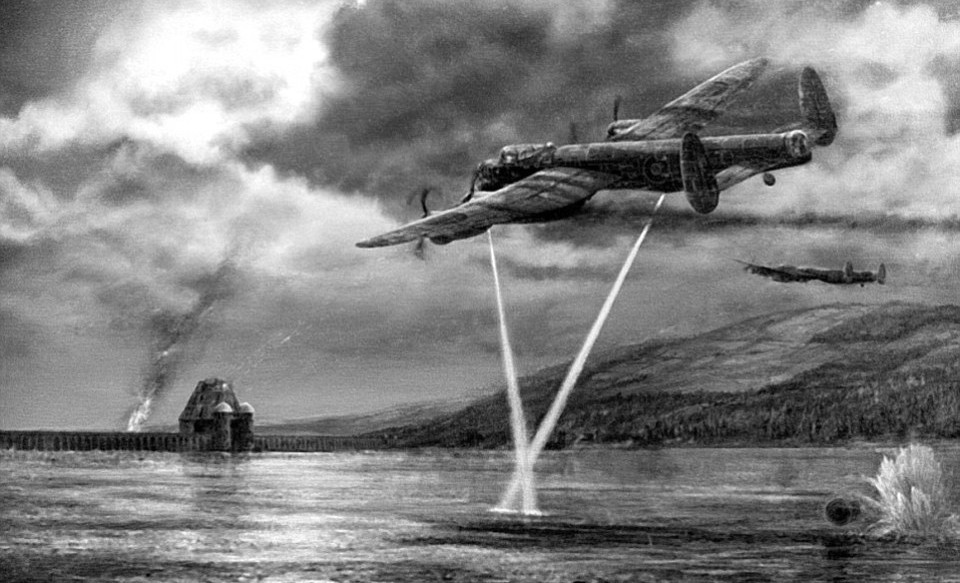 It’s almost 75 years to the day since ther Dam Busters took to the air in one of the most incredible chapters of the Second World War.

It was May 16, 1943, just after 9pm, London time, when the Lancaster bombers from a hastily assembled 617 Squadron began their take off run.

Their destination were  the Eder and Ruhr valleys in Germany. Their mission, Operation Chastise. Their targets?

British Bomber Command had identified three dams — the Möhne, Sorpe, and Edersee Dams — as strategic targets as they supplied both water and hydro-electricity for Germany’s war effort.

The oinly problem was working out a way to do it . . .

Initially it was thought one big, high yield bomb would do the job.

But conventional bombs could easily be trapped by heavy netting placed in the water to protect the dam walls.

Known for his “geodesic” design philosophy, employed with great success in the Vickers Wellington bomber, his idea like so many brilliant ideas, was devilishly simple.

Wallis suggested a bomb that would literally bounce across the water’s surface, sinking when it finally hit the dam wall.

Extensive testing was undertaken, with weight, height, casings and speed — all considered.

Some tests showed the bomb casings were too thin or too heavy. Other tests showed the aircraft tasked with delivering the bomb was flying too high or too low, with one film showing the tail of a Lancaster being hit by the spray of the first bounce.

While testing continued, 617 squadron was put together under the command of Wing Commander Guy Gibson.

Members of the squadron were sourced from the Commonwealth and trained to fly the Lancaster bomber at night and at low levels, but without being told the reason.

Australians such as David Shannon, Les Knight, and Harold “Micky” Martin were among them.

Nineteen Lancasters, specially modified to carry the bouncing, drum-shaped bombs, were employed in the raid.

One crucial element, the approach height of the bombers was solved, and again the fix was simple.

Two lights were fixed to the Lancaster, one at the nose and the other underneath a wing. When they converged the aircraft was at the desired 50 feet.

Legend has it that it was suggested by a pilot who had visited a strip club, where he had watched two lights being brought together to emphasis a dancer’s breasts.

The raid itself was carried out in three waves. Gibson himself led the first wave of nine in the aircraft labelled “G for George”. Möhne Lake was the target.

The second wave of five targeted the Sorpe. The Eder dam was target number three. If the Möhne was breached then any aircraft in the first wave was to be redirected here.

Ultimately, the raids were hailed as a success, of sorts. Nine aircraft were lost, with the death of 54 aircrew.

The Möhne dam was breached by a bomb dropped from David Maltby’s Lancaster. The Eder was hit by Knight’s aircraft, while the Sorpe remained largely untouched.

Some 1600 people died in the floodwaters released by the breached walls — 749 of them were prisoners of war.

However, the dams were rebuilt and back in operation within a matter of weeks.

Perhaps the greatest effect of the raid was the loss of arable land and livestock, with some farming areas not returned to useful farming until the 1950s.

Gibson was awarded Britain’s highest military honour, the Victoria Cross, for his part in the operation.

Wallis continued to design bombs that were used to great effect by 617 Squadron.

617 Squadron itself has been disbanded and reformed, with aircraft such as the Panavia Tornado being flown. Its latest formation has it as the first British squadron to fly the F-35 Lightning 2.

But for most people the squadron will be forever known as “The Dam Busters” — the name of the 1955 film depicting this incredible chapter of the WWII, starring  Michael Redgrave and Richard Todd.