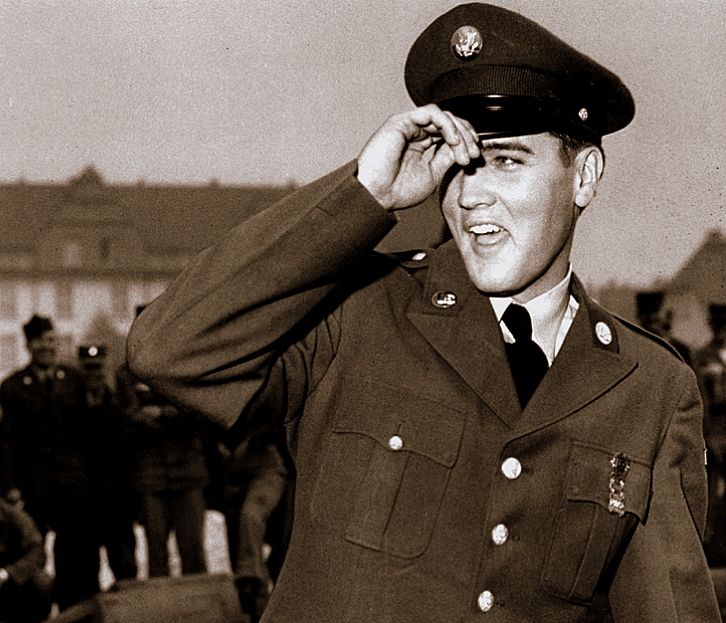 When he turned 21 years of age, singer Elvis Presley like other American youths of the time was drafted into the US army.

Rather than allow his prize cash cow to perform free of charge as an entertainer in the Special Services, his manager Colonel Tom Parker, conned him into enlisting as a regular grunt.

A furious Elvis spent three years in the Army, some of this time stationed in the German town of Friedberg.

More precisely, he rented a house in nearby Bad Nauheim, but was stationed at the Army’s Ray Barracks where he served with the 3rd Armoured Division from 1958 to 1960.

In fact, the Division’s motor pool and tanks were used in filming Presley’s 1960 movie GI Blues.

Elvis had good reason to remember Friedberg, not only because of the war, but because that’s where he met his wife of six years Priscilla who he married after a long courtship.

Friedberg remembers the the King too, with a statue erected at a roundabout that sits opposite what was the gates to the army base.

A section of the local museum is also devoted to the singer and, in the latest homage to the dead entertainer, the town has installed some pedestrian lights that feature images of the performer.

Yep. The three crossing signals, installed at Elvis Presley Square, show the singer with microphone for the red “Don’t Walk” signal — and the singer dancing for the green “Walk” signal.

Elvis himself “crossed over” back in 1977, leaving a legacy that lives on to this day.