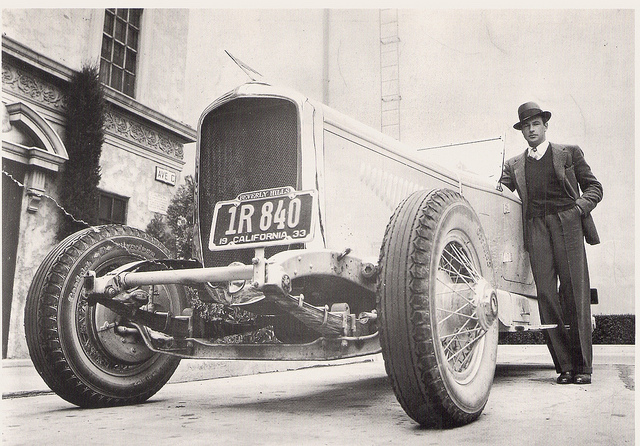 A FEW months ago a 1935 Duesenberg SSJ once owned by movie star Gary Cooper sold for a jaw-dropping US $22 million ($28.3m Aussie dollars) to become the most expensive American collector car ever sold.

Now another Duesenberg,  a super-rare 1929 Model J ‘Disappearing Top’ Torpedo is also heading to auction, on May 22, at RM Sotheby’s Amelia Island.

It probably won’t top the SSJ’s price, but it is one of only six ever made — so who knows how high it will go on the eight-figure dollar scale?

Pasadena-based coachbuilder Walter M Murphy’s most famous design on the Duesenberg Model J chassis was the so-called Disappearing Top Convertible Coupe, of which only 25 examples were produced.

Each had a unique convertible top that was neatly put away inside the smooth rear deck when lowered.

But the one-off going to auction is a much rarer machine, being a Disappearing Top Torpedo Convertible Coupe.

Only six of them were built and many say they were Murphy’s finest work on the Duesenberg chassis.

It seamlessly blended the convertible coupe’s lines with the graceful and flowing tapered deck of a boat-tail speedster.

Often, Murphy completed it in bare aluminium that extended forward through the beltline and down the centre of the car’s cowl, so it shone in the sun.

Of the six he built, one was a long-wheelbase example, and the other five were built on a short wheelbase.

Only four of the original six remain above ground.

Body No. 876 features a single-passenger rumble seat in a distinct tail and is one of two Torpedos that did not have the usual chrome rubbing strips on the rear fenders when it was delivered.

Also, it was delivered with bare aluminium coachwork.

The sides of the body and most of the hood had a brush-finish while the top of the rear deck, going through the caps of the doors towards the sweep of the bonnet, was presented in a mirror finish.

Some say the striking result was similar to some Rolls-Royces constructed for Indian Maharajas.

On this Torpedo,  only the fenders and valances are painted, with a rich dark blue finish.

The first owner was David Gray of Santa Barbara, California.

By 1919, David Gray sold his stock back to Mr Ford for US $26 million and lived quite contented for the rest of his life.

In 1933, the Gray Duesenberg was sold to William McDuffie from Los Angeles where, like so many of the Duesenbergs in the late 1930s, it was modernised.

The redesign caught Hollywood’s attention, where it made its silver screen debut in a memorable scene from the movie She Had to Eat.

In the next few years until the late 1940s, it had a few Southern Californian owners, including Robert J Gottlieb, the famed Beverly Hills attorney and longtime Motor Trend magazine columnist.

William Coverdale, of Waynesville, Ohio, acquired the car, without the engine, in 1951.

That didn’t deter Mr Coverdale, who acquired and installed another original Duesenberg engine, J-414, which is still in the car.

After a long ownership of 34 years, Mr Coverdale parted with his prized possession in 1985.

It was next acquired by the Blackhawk Collection, where it went through a restoration process before being presented to the Auburn Cord Duesenberg Club.

It was certified Category One, noting that it has kept all the correct Duesenberg components, including the original chassis frame, bodywork, and firewall.

In 2015, the current owner acquired the car, where it underwent a complete, Concours-quality rebuild under the expertise of RM Auto Restoration.

After some research, the original bare brushed aluminium finish was restored, while the surviving Murphy factory and period photographs of the example enabled them to return its original trim.

It made its Concours-quality restoration debut at the 2019 Pebble Beach Concours d’Elegance, where despite strong competition, it was awarded Second in Class.

Then at the 2020 Amelia Island Concours d’Elegance, it achieved Best in Class.

RM Sotheby’s said the Disappearing Top Torpedo Convertible Coupe was the only one still in its original bare aluminium livery.

“It is a truly remarkable automobile, one that stands alone even in the rarefied world of Model J Duesenbergs,’ they say.

Roll on May 22, and let’s see what this beauty fetches.