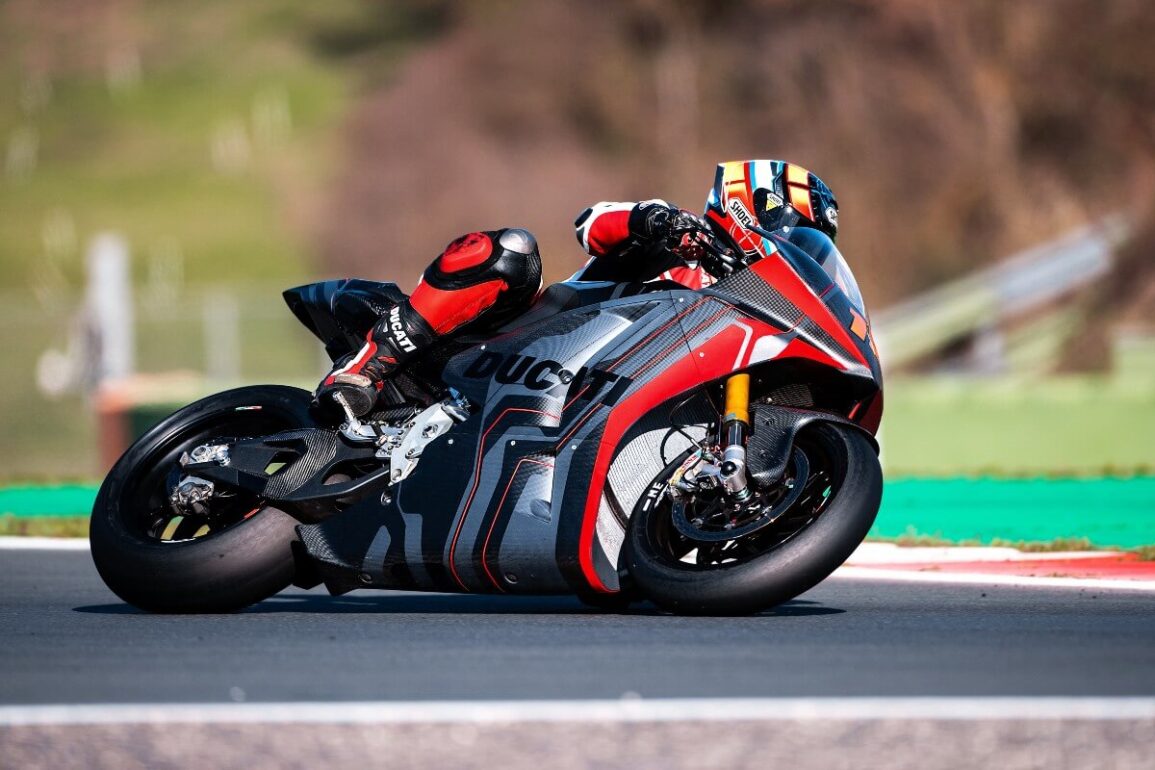 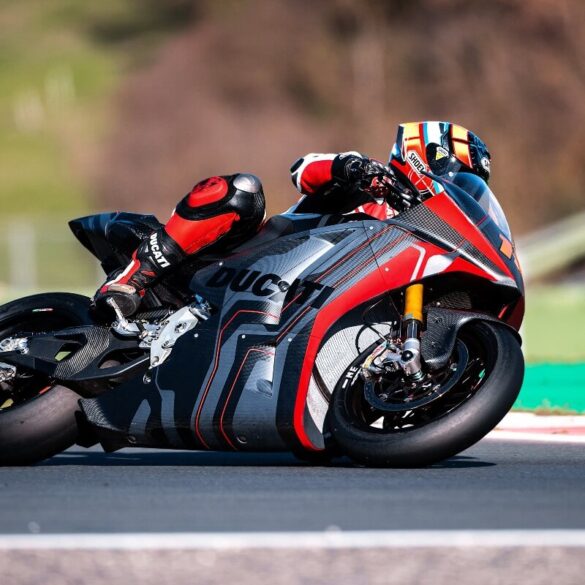 Ducati has revealed details of its first electric bike, the MotoE.

The MotoE weighs in at 225kg — 12kg less than the minimum requirements imposed by Dorna and FIM for racing.

With maximum power and torque figures of 110kW and 140Nm, it can reach a speed of 275km/h on a circuit such as Mugello in Italy.

The battery pack weighs 110kg and offers a capacity of 18kWh, with a 20kW charging socket integrated into the tail.

The inverter, with a low weight of 5kg, is derived from a high-performance model used in motor racing for electric vehicles.

The 21kg motor, with a maximum rotation speed of 18,000 rpm, was developed by a partner following specifications provided by Ducati.

The entire system is based on a voltage of 800V with a fully charged battery pack, to maximise output of the electric powertrain — and with it performance and range.

The liquid cooling system is particularly sophisticated, with a double circuit designed to meet the different thermal needs of the battery pack and the motor/inverter unit.

This guarantees regularity of temperatures with important benefits in terms of consistency of performance — and also charging times.

In fact, it is not necessary to wait for the battery pack to cool to start the process.

MotoE can be charged as soon as it enters the garage and takes about 45 minutes to recharge up to 80 per cent.

The carbon fibre case of the battery pack also acts as a stressed part of the chassis, similar to the Ducati Panigale V4 engine, with an aluminium monocoque front frame weighing 3.7kg.

The rear is composed of an aluminium swingarm weighing 4.8kg with a geometry like that of the Ducati Desmosedici racing in MotoGP.

The rear subframe, which integrates the tail and the rider seat, is made of carbon fibre.

The suspension area features an Öhlins NPX 25/30 pressurised fork with 43mm diameter upside-down tubes at the front, derived from the Superleggera V4, while an Öhlins TTX36 shock absorber is present at the rear and is fully adjustable.

The steering damper is an adjustable Öhlins unit.

The braking system is supplied by Brembo and is sized for the specific requirements of the Ducati MotoE.

At the front it is composed of a double steel disc with a diameter of 338.5mm, which has fins on the internal diameter, designed to increase the thermal exchange surface area and improve disc cooling in conditions of extreme use on the track.

At the rear, the P34 caliper acts on a single disc unit 220 mm in diameter and 5 mm thick with a PS13 master cylinder.

Teams can also choose to equip their bikes with an optional rear brake control positioned on the left handlebar, which the rider can use as an alternative to the pedal one.

The development process of the Ducati MotoE also involved the Ducati Corse test team led by Marco Palmerini, who worked on the track applying the same methodologies used in MotoGP, thanks also to the support of the riders Michele Pirro, Alex De Angelis and Chaz Davies.

The aim was to obtain a throttle response indistinguishable from that of the racing bikes that Ducati riders are used to.

Due to get underway next year, Ducati will take on the role of sole supplier for the FIM MotoE World Cup, with 18 electric motorcycles on the track every weekend.