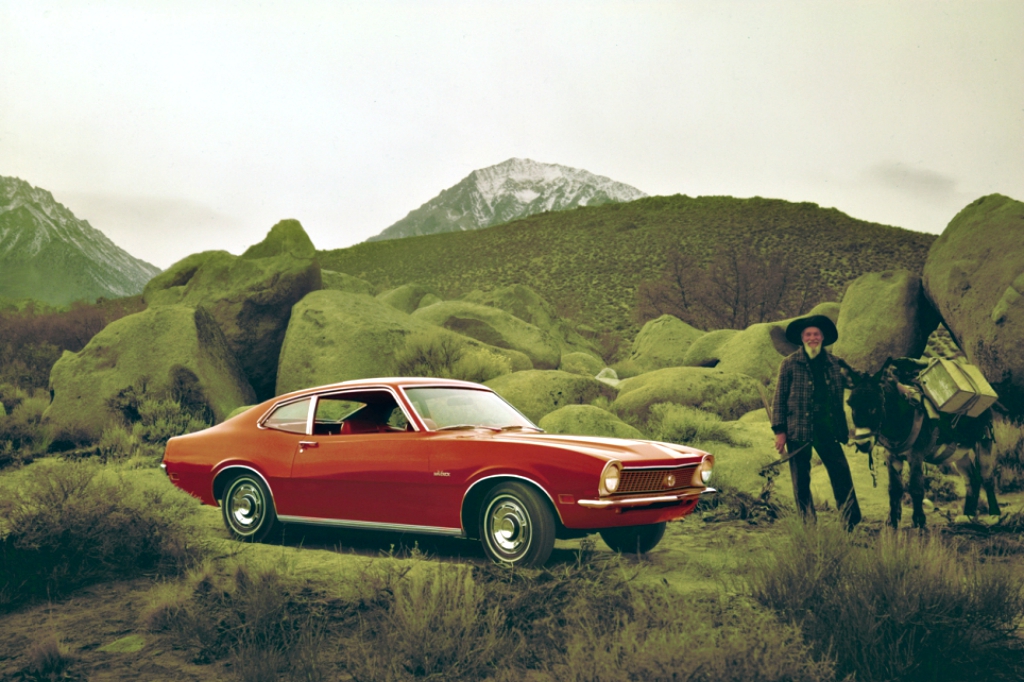 Did anyone mention the word Maverick?

No, not the clone of the Nissan Patrol 4WD.

I mean the other Ford Maverick, the really successful and stylish one.

Get this: its first year sales topped 579,000, only 8 per cent less than the Mustang’s record for the same time span.

That’s what I call successful.

The Maverick was Ford North America’s first, all-new automobile since the Mustang, and was released on April 17, 1969, five years to the day after its iconic sibling.

Sitting on a 103 inch (2591mm) wheelbase, it is approximately the same dimensions as the European Capri, which was developed at the same time.

Yet, despite its rampant sales success, we hear virtually nothing about the Maverick these days as a classic automobile.

It has been neglected by collectors and lives in the shadow of the Mustang and the Capri.

So, let’s change all of that and shine the spotlight on its smooth flowing flanks and give the coupe the 50th anniversary celebration it deserves.

The Maverick was Ford’s answer to a number of problems and changing market dynamics.

By the end of 1965, US auto executives finally realised that the ever increasing sales of those pesky small imported cars, especially VW’s Beetle, was not just a passing fad.

The urgency of the situation yelled out from the statistics.

Ford knew that unless they acted quickly they would have no car in this growing segment — predicted to be 1 million cars in 1970 — and profits would suffer.

Then there was the Falcon.

No longer a small car, its sales had been savaged by the Mustang and its engineering was unable to meet new US auto safety standards which would take effect on January 1, 1970.

Falcon production would stop at the end 1969 and Ford needed a replacement.

Like the Falcon, the Mustang was growing bigger and heavier, transitioning away from its original positioning as an affordable coupe.

This left the Mustang vulnerable to a competitor developing a cheaper, smaller sporty coupe.

Ford was right to be concerned.

In early 1967, GM was evaluating a mini-Camaro, designated XP 873 — but did not develop it further.

Toyota went all the way and it arrived in late 1970 as the Celica.

The Maverick was designed to respond to all of these issues, so there was a lot at stake despite its entry level position in Ford’s line up as a cheap and basic car.

Make no mistake, the cheapest Maverick was basic.

To achieve a $1995 price tag, it was offered only as a two-door and stripped of nice-to-have items, including the glove box and carpet.

The rear windows flipped out— no expensive winding mechanism here.

Falcon parts and driveline were recycled as much as possible.

Where Ford spent most of the development money was on the all-new styling.

With a long bonnet, short boot and fastback roofline, it was as if the original Mustang had been reborn.

Although the Maverick was pictured in western and ranch-type settings, the wording of the advertisements and brochures was aimed directly at the Beetle.

Ford questioned the size, power, roominess and luggage capacity of the VW, pointing out that Americans should expect more — and with the Maverick, they got it.

To emphasise these points, visual comparisons were used.

The original engine offerings were the trusty 170 and 200 cubic inch sixes.

In 1971 the 302 cubic inch V8 was added to the options list and one of America’s cheapest muscle cars was created.

A four-door Maverick was released in 1971 along with a two- and four-door Mercury variant — the Comet.

The two lasted until 1978 when they were replaced by the Ford Fairmont and Mercury Zephyr.

In the meantime Ford, GM and American Motors developed even smaller cars—Pinto, Vega and Gremlin—to fight off the imports and rising petrol prices.

The Mustang was downsized in 1974 on to the Pinto platform and was now smaller than the Maverick.

And what of the Beetle’s sales?

I think the Maverick is a great looking car, and worthy of more attention, especially the 1969-70 models.

It is left hand drive and has full registration so it must be driven often.