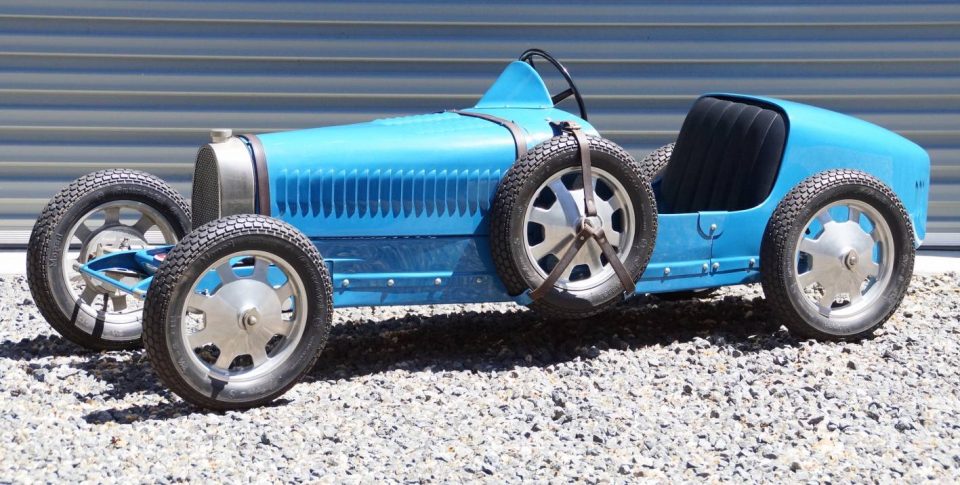 Bidding closes soon on the extensive list of automotive memorabilia collected by the late Ian Cummins (closes from 5pm AEDT on December 14, 2017).

While everything from carburettors to bonnet mascots are represented, the big draw card is undoubtedly the many model cars that Cummins collected during his lifelong fascination with rare and sporting vehicles.

A true connoisseur of model cars of all scales, he opened Australia’s first shop dedicated to them – Model Cars Australia – in Kent Street, Sydney in the 1970s.

He assembled a vast collection of rare and hand-built models before selling the shop in 1986 to become curator of Donnington Motor Museum in England.

Topping the bill is a professionally-crafted child’s electric car based on a scaled-down Bugatti Type 35 Grand Prix car that is expected to attract international interest in the $20,000-$30,000 range.

Alternatively, Jaguar enthusiasts could acquire one of several sets of rare Dunlop alloy road wheels from full-size racing D-Types that are expected to sell in the $12,000-$16,000 range.

At the more affordable end of the scale, bidders could acquire a trio of 1:43 scale Jaguar D-type and C-type models offered with ‘no reserve’ – for as little as $80-$120.

Steering Wheel collectors are well-served in the online auction, with 55 examples on offer, coming off a wide range of sporting vehicles over the past century.

Amongst the rare steering wheels in the collection is an Aston Martin DB 3-spoke wood rim with boss that is being offered with ‘no reserve’ and is expected to sell for $1500 – $2000 and a 15.75-inch diameter Nardi steering wheel that Cummins acquired from fellow-Sydney enthusiast Laurie O’Neill’s after it had come off his Ferrari 212 ($4000-$8000).

Rare Weber carburettors are amongst the automotive items in the sale, typified by the sandcast Weber 40DCO3 No2 side-draught examples once fitted to an Alta 4- cylinder engine ($3000 – $5000), while a set of three Weber 36DCL3 downdraft carburettors with intake manifolds and air cleaners from a late 1950s Ferrari 250 are expected to bring $5000-$8000.

The Ian Cummins Automotive Memorabilia Collection is a Timed Online Auction allowing you to place bids online, in real time on all auction lots from anywhere in Australia or overseas.

Please note if you have not registered as a Shannons online bidder, registration closes 12 hours prior to the designated auction closure date.