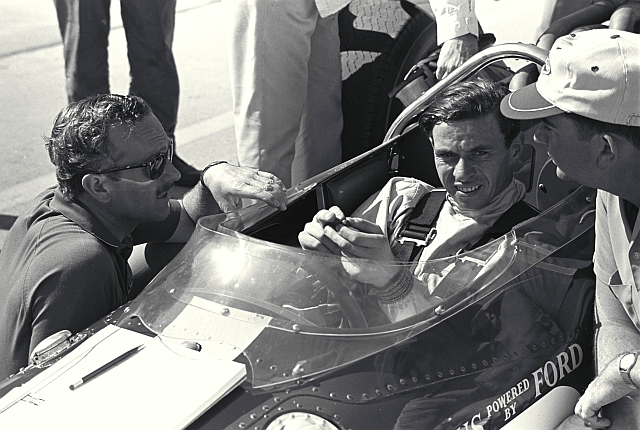 It is 50 years since Jim Clark died in a racing accident at Hockenhiem, Germany.

Much has been said and written about Clark.

From my perspective, Jim Clark’s best year was 1965. He won the World F1 Championship and the Indy 500.

More people have walked on the Moon than won Indy and F1 crowns in the same year, so it is a very select club.

Clark’s 1965 win in a rear-engined, V8 Ford powered Lotus meant that the era of the big, sleek front engined Offenhauser roadsters was over.

Clark was the first non-American to win since 1916.

Jim Clark and Lotus owner Colin Chapman started their assault on Indy in 1963.

Ford supplied the power plant for Chapman’s re-configured Formula One car. Clark finished second that year. In 1964 a broken suspension put him out.

For the 1965 race Chapman believed he had the best technological and best driver in the world. What he needed was a professional pit crew.

So he rang the Woods Brothers of NASACR fame and asked them for assistance. It was an inspired choice.

Leonard and Glenn Wood brought a slickness to the 500 that no one had seen before.

They invented a quick flow fuel delivery system which Leonard Wood said “poured 58 gallons in 15 seconds” at a time when everyone else took a up to a minute.

In the race the Lotus was fuelled so fast that many in the media and other crews thought they’d not filled the car, and were expecting another pit stop.