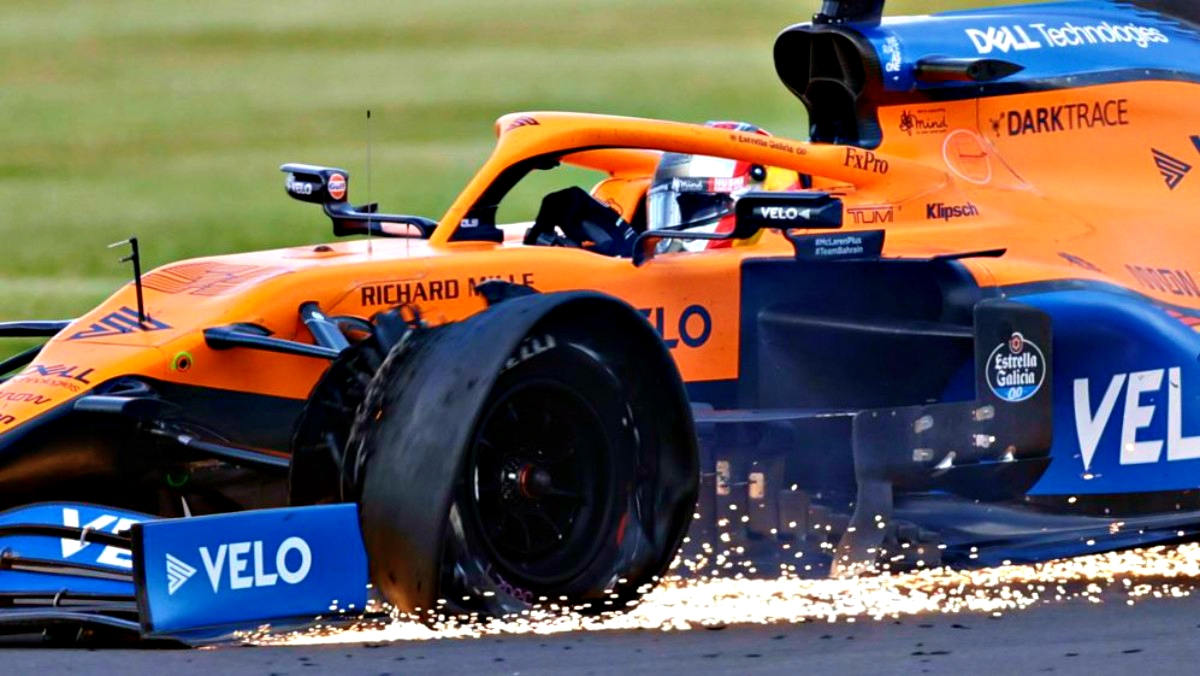 THE tyre dramas in last weekend’s British Grand Prix at Silverstone were the result of an unusually long stint on one set of tyres, coupled with the increased speed of the 2020 Formula 1 cars — so the tyres were subject to the biggest forces ever seen, says tyre supplier Pirelli.

The front left tyre of Bottas’s Mercedes was the first to go on the penultimate lap, forcing him to pit and dropping him from second down to 11th at the flag.

Sainz suffered a similar fate, slipping from 4th to 13th, while Hamilton was able to limp to the finish line and win after his Merc’s front left also deflated midway through the final lap.

“The key reason is down to a set of individual race circumstances that led to an extremely long use of the second set of tyres,” Pirelli said.

“The second safety car period prompted nearly all the teams to anticipate their planned pit stop and so carry out a particularly long final stint: around 40 laps, which is more than three-quarters the total race length on one of the most demanding tracks of the calendar.

“Combined with the notably increased pace of the 2020 Formula 1 cars (pole position was 1.2 seconds faster compared to 2019) this made the final laps of the British Grand Prix especially tough, as a consequence of the biggest forces ever seen on tyres generated by the fastest Formula 1 cars in history.

“The overall result was the most challenging operating conditions for tyres.

“These led to the front-left tyre (which is well-known for working hardest at Silverstone) being placed under maximum stress after a very high number of laps, with the resulting high wear meaning that it was less protected from the extreme forces in play.”

Despite the issues in last Sunday’s race, the tyre allocation for all teams will move one step softer for this weekend’s race, the 70th Anniversary Grand Prix, which is also being held at Silverstone.

Pirelli confirmed the change to the softer compounds will go ahead as planned, but added “usage prescription will be reviewed” in terms of the tyre pressures to be used.

“We confirm the nominated compounds: C2, C3, and C4, being one step softer than those seen at the last GP,” the company said.

“Also the usage prescription will be reviewed, increasing the minimum tyre pressures to reduce the stress on the construction.”

Scuderia Ferrari has joined Renault in their appeal against the ‘Pink Mercedes.’

Blind Freddie can see that Racing Point’s car has many similarities to that of Mercedes AMG Petronas Formula 1 winning cars of the 2019 season.

Renault took the matter to the FIA during Styrian Grand Prix.

The case focuses on the design of Racing Point’s brake ducts. Mercedes used similar parts in their car in the 2019 season.

Ferrari supports the matter along with Renault and has formally requested FIA and F1 to clarify terms in the Formula 1 Sporting Regulations which are a key aspect of this case.

The whole scenario revolves around the fact that the team is using the same designs and models of the parts Mercedes did last year.

Appendix six of the regulations reads: “A competitor shall, in respect of the listed parts to be used in its cars in Formula 1, only use listed parts which are designed by it.”

McLaren is also less than happy.

“We support getting to the bottom of the whole Racing Point copying of the Mercedes car,” team principal Zak Brown said.

“We think it’s against the spirit of the rules. Because we don’t have details, we’re not in a position to have a view on whether it’s legal or not, but it definitely seems like it’s against what’s intended in Formula 1.”

A formal hearing by the FIA will be take place on Wednesday regarding the protest.

CHECKOUT: Tyreing . . . but Hamilton does it again

CHECKOUT: Missing in action: drivers who didn’t make it to F1