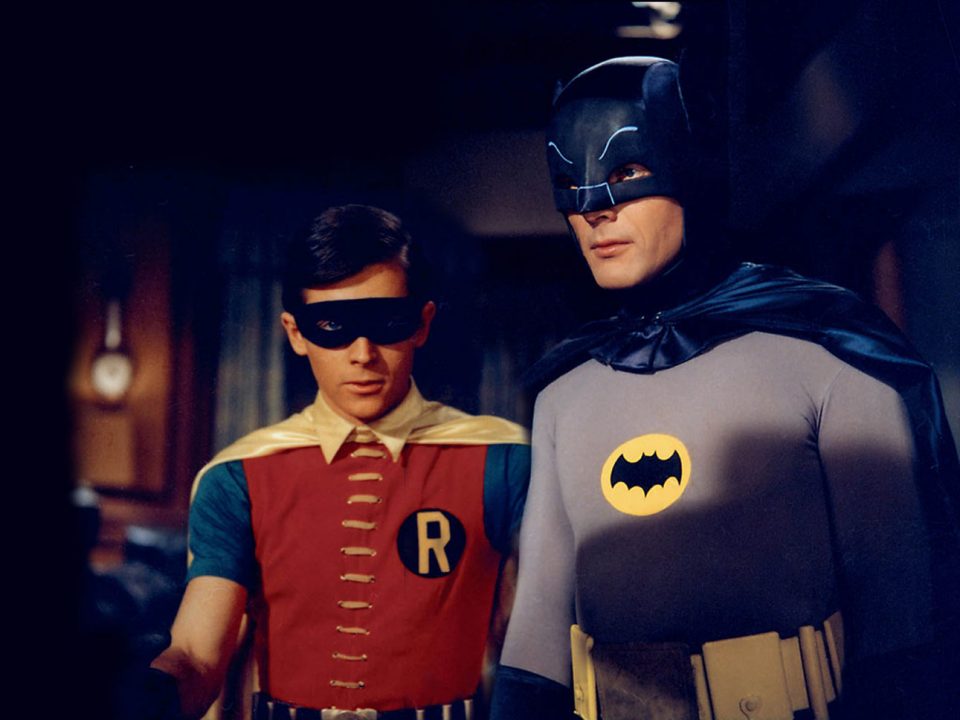 When Batman’s Adam West died earlier this year it was the end of an television era.

Star of the popular 1960s Batman TV show, West died after “a short but brave battle with leukemia,” his family said in a statement.

For mine West’s characterisation is the one that I will forever associate with the Batman role.

My brother and I were huge fans of the show and of course the very cool Batmobile.

Anyone else have one of the yellow plastic utility belts with its Batarang and other Bat essentials?

Batman first appeared in comics way back in May 1939.

But the first true Batmobile did not appear for two years after this.

Probably the best known of the cars, however, is the one from the hit ’60s TV show starring Adam West and Burt Ward.

Who could forget Batman’s famous words that preceded any jaunt in the car: ‘‘Atomic batteries to power . . . turbines to speed.’’

The 1955 Ford Futura concept was later convertered into the Batmobile for the 1960s “Batman” TV series.

Commissioned by the producers to create a car for the show in just three weeks, Kustom Kar King George Barris turned instinctively to the Ford Motor Company’s 1955 Futura concept car as the basis for his iconic design.

But, unlike most concept cars of this or any era, this one was actually a working model.

Legend has it that the design of the Lincoln was inspired by an encounter Schmidt had with a shark while scuba diving.

The Futura was long, low and wide, and flat with a predatory full-width grille, ominously hooded headlights and killer tail fins.

The job of building the Batmobile was offered originally to Dean Jefferies who built the car for the Green Hornet series, but Jefferies apparently could not fit it into his busy schedule.

With no time to spare, Barris turned to the Futura which he had apparently acquired from Ford for a token $1 and had intended to use for a sci-fi movie.

He realised it would be relatively easy to build on the chassis and basic shape of the car, overhauling the nose and tail with numerous bat-like shapes and references.

In all, Barris is credited with building four Batmobiles but only one of them – the original Futura-based car – actually appeared in the TV show.

This was the first ‘‘real’’ Batmobile and surprisingly nearly all of the bat gadgets worked.

Surprisingly many of the special features actually worked.

Some of the features on the car included a telephone, radar, smokescreen, chain cutter, ‘‘Batterring’’ ram, rocket launchers, drag chutes and an atomic power plant engine.

It is still considered by many to be the quintessential Batmobile and its influence can be found in more recent designs.

Weighing in at almost 2.5 tonnes and measuring 5.2m long and 1.2 high, the car has a handcrafted steel body.

The original experimental Ford engine was replaced for the series with a blue-printed 427 Ford engine that had dual Paxton blowers with a nitro injector.

The car is finished in 40 coats of super gloss black and trimmed in an outline of fluorescent cerise.

Most of the Batman series was shot in four studios.

Taking the car out of the backlots for location shoots was a problem because the car could not be driven on public roads.

Permits were obtained to shoot a few scenes at the Redondo Beach pier and a short stretch of private oceanfront road.

These became stock footage and were used over the three years the show ran as well as in the 1966 feature film.

Scenes of the Batmobile roaring from the Batcave were shot at famous Bronson Canyon in the Hollywood Hills, with the footage speeded up to make the real cave look deeper than it actually was.

Adam West as Batman and Burt Ward as Robin in the 1966 TV series.