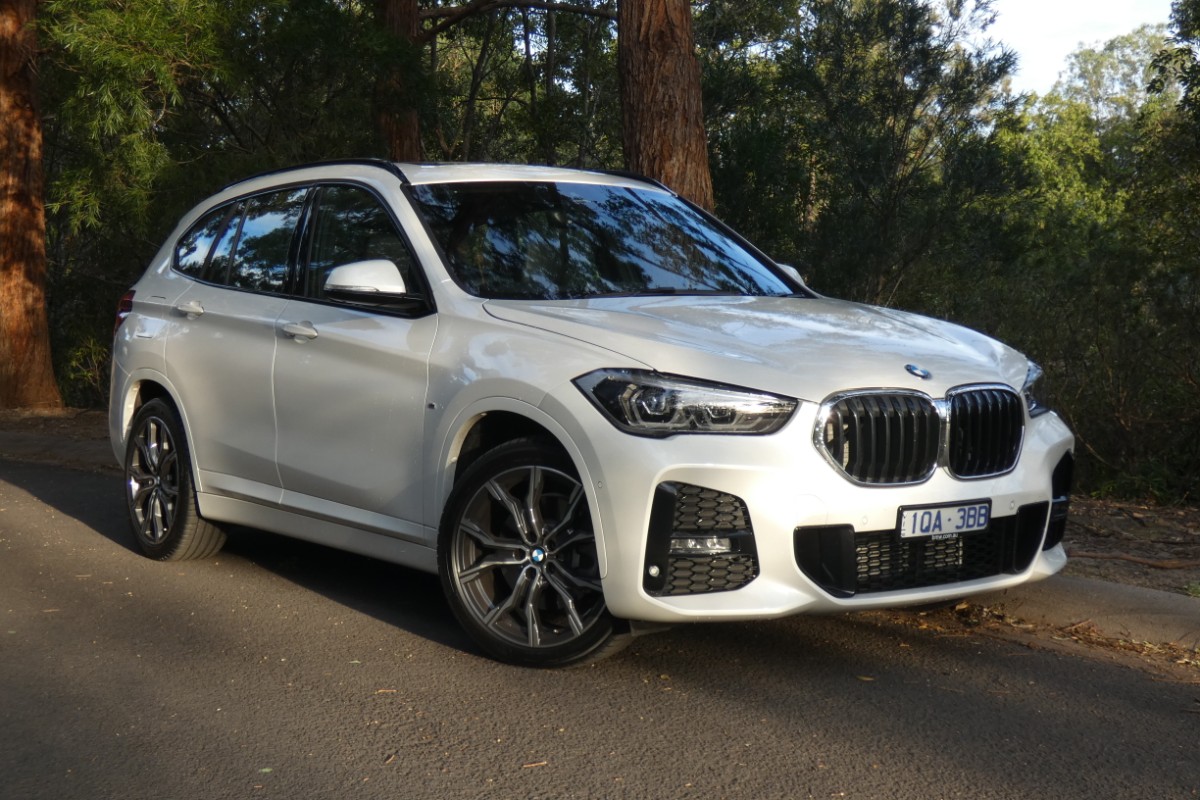 I still remember driving home from Albury to Sydney from a launch in 2012, at the wheel of a diesel that I kept for three months.

Arriving here with the first wave of new generation SUVs, it was a very practical if unexciting addition to the German car maker’s fleet.

The latest X1, which adds the acronym LC1 (again), is a more interesting proposition, especially with a turbocharged engine that pushes out a tasty 170kW.

But to be honest it doesn’t look all that different from the car we drove way back then.

The X1 received a major refresh around the middle of last year, with new lights front and back, called a top and tail in the biz — plus some tweaks for the cabin. 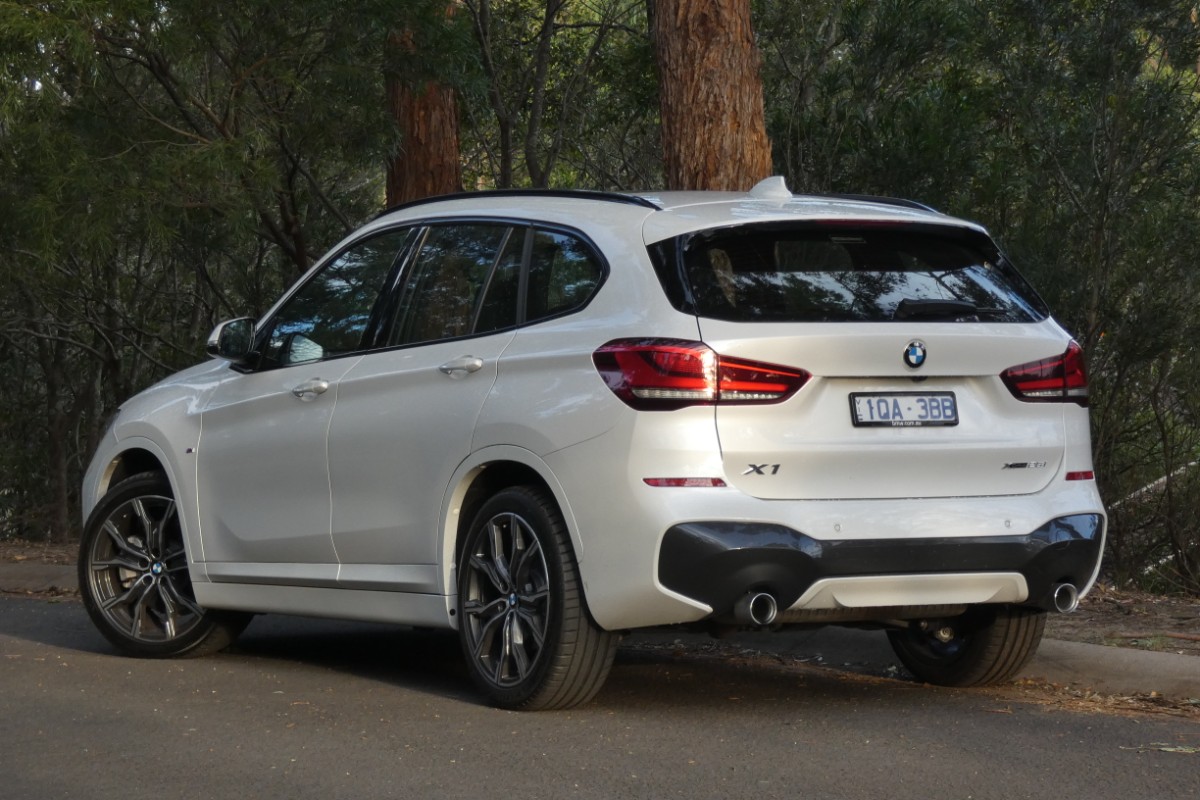 That’s the same engine that can be found in the modern Mini, also produced by BMW.

The rest of the range is powered by a more conventional 2.0-litre four cylinder engine in various states of tune.

They come in XLine or sportier M Sport trim packages.

But not for some reason blind spot monitor.

The latter includes Sport leather steering wheel, M Sport suspension and aerodynamics package, sports seats, 19-inch Y-spoke alloy wheels, and a few other bits and pieces — bringing the final figure to just over $70,000 plus on roads.

Is it worth it? Well the 2800 people who bought an X1 last year thought so. 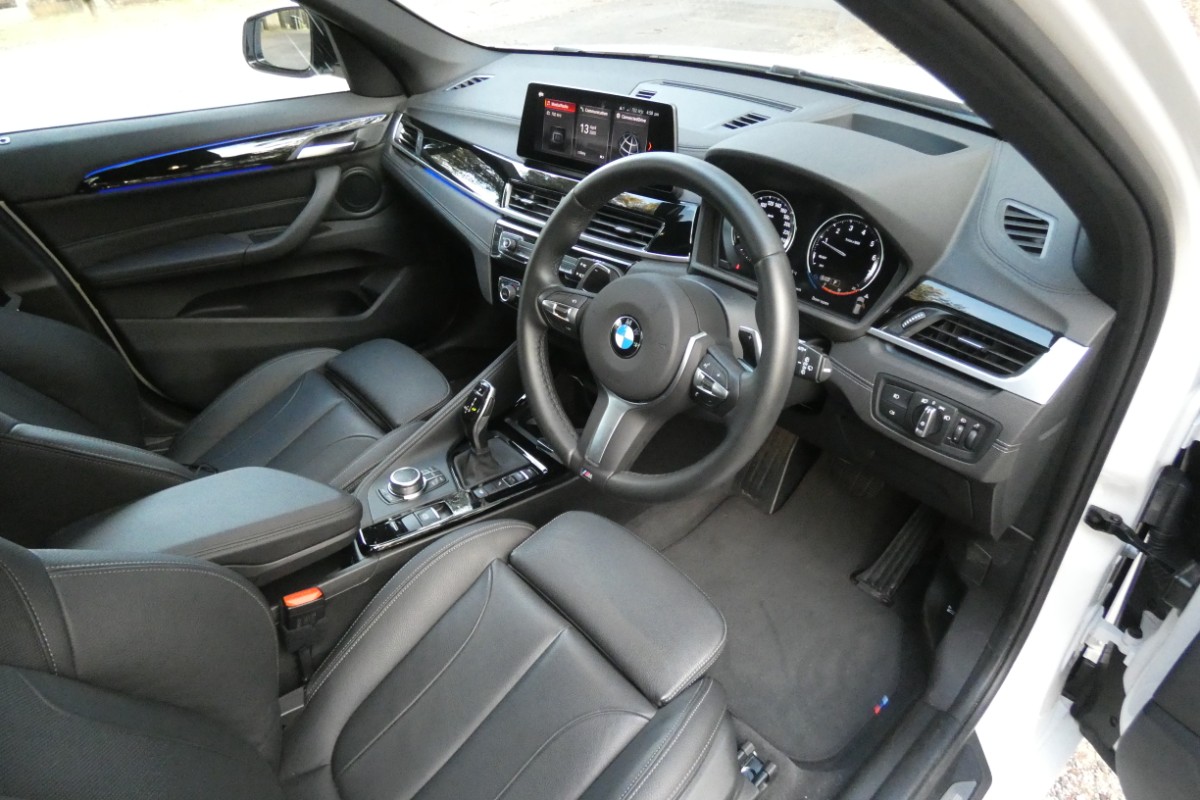 Like the rest of the range the 2.0-litre engine is turbocharged.

It’s paired with an 8-speed Steptronic sport auto with paddle shifts, auto engine stop-start and in this model at least drive is to all four wheels — the only grade to actually do so.

Originally, of course, it was rear-wheel drive in standard form, before all this front-wheel drive nonsense.

Even the xDrive25i however remains front-wheel drive most of the time, with a torque on demand system that transfers drive to the rear wheels as required via a Haldex clutch setup.

You can also access various drive modes, including Eco Pro which most drivers are likely to try once then mothball because it literally sucks the life out of the engine.

What I like most about Beemers is their chunky steering wheel and the planted, glued to the road feel they all seem to have — even this tiddler.

It’s been a while between drinks but it is something that is instantly recognisable and reassuring.

What I don’t like about Beemers is their doom and gloom black interiors and brightly lit, overly busy dash which can be daunting for some drivers.

Interestingly, all but the M Sport cars used to ride on run-flats tyres, but this one comes with goo and a re-inflation kit to save space and weight — the absence of a spare could weigh heavily for some.

The X1 presents as two cars in one.

It’s a real Jekyll and Hyde, an innocuous shopping kart most of the time, but slip it into sports mode and start banging through the gears manually and it becomes a strident sports machine.

Heck, leave it to change gears itself and it’s still right on the money, although there is some momentary hesitation before the throttle responds — or more specifically before the ZF tranny hooks up.

They design these things to get into high gear and stay there to save fuel, and they have a tendency to nod off there.

BMW’s smallest breadbox goes hard with high levels of grip and plenty of control in corners, far more than most owners will ever need.

The steering wheel fits snugly in the hands and steering response is spot on, with dynamic handling and brakes that are equally impressive.

This my friends is why you buy a Beemer.

BUT, turning to more practical considerations, it seems to lack, despite the fact the xDrive 25i is top of the line.

It doesn’t have blind spot monitoring, nor apparently is it offered and cruise control is not self-regulating, as is the norm these days — despite the fact the car has automatic braking.

And, being the owner of an Android phone, we’re gobsmacked there’s no Android Auto? It only gets Apple CarPlay.

The dash too is as basic as it comes, with regulation analogue dials, and a small computer display between them that can show digital speed and the current speed limit.

But it can’t be configured to change the look in any way, can’t display the navigation map and does not warn of speed cameras.

The large iDrive rotary control is still to be found, but the largish infotainment screen finally also responds to touch.

Form-hugging, power adjust and heated front sports seats are comfortable, but Euro comfortable — not in an armchair way.

And, after all these years, it is still almost impossible to see the head-up windscreen display with polarised sunglasses, which in sun-scorched Oz is an issue.

Boot capacity remains unchanged, with a volume of 505 litres that can be extended to 1550 litres via flexible 40/20/40 rear folding seats.

A power tailgate is standard on sDrive20i and xDrive25i, with only a wave of your foot under the rear to activate it.

Fuel consumption from the 61-litre tank is a claimed 7.1L/100km in this model and it takes premium 95 unleaded. 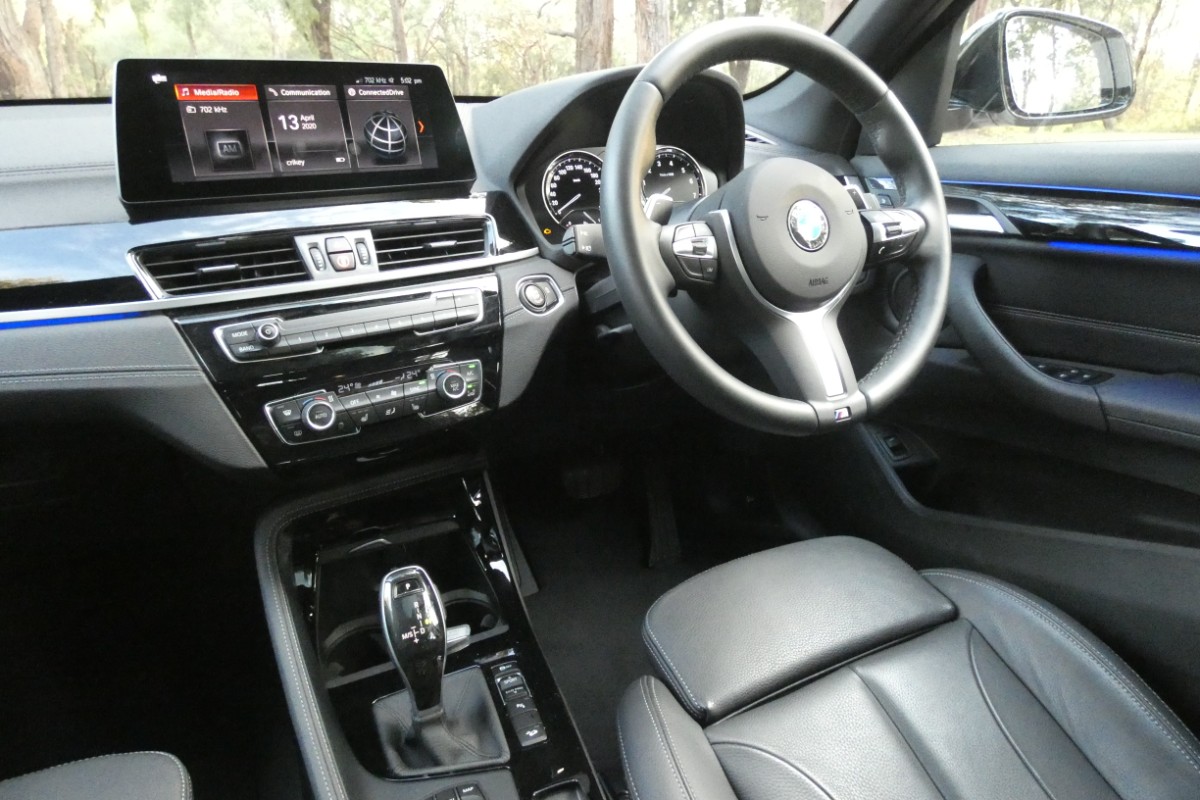 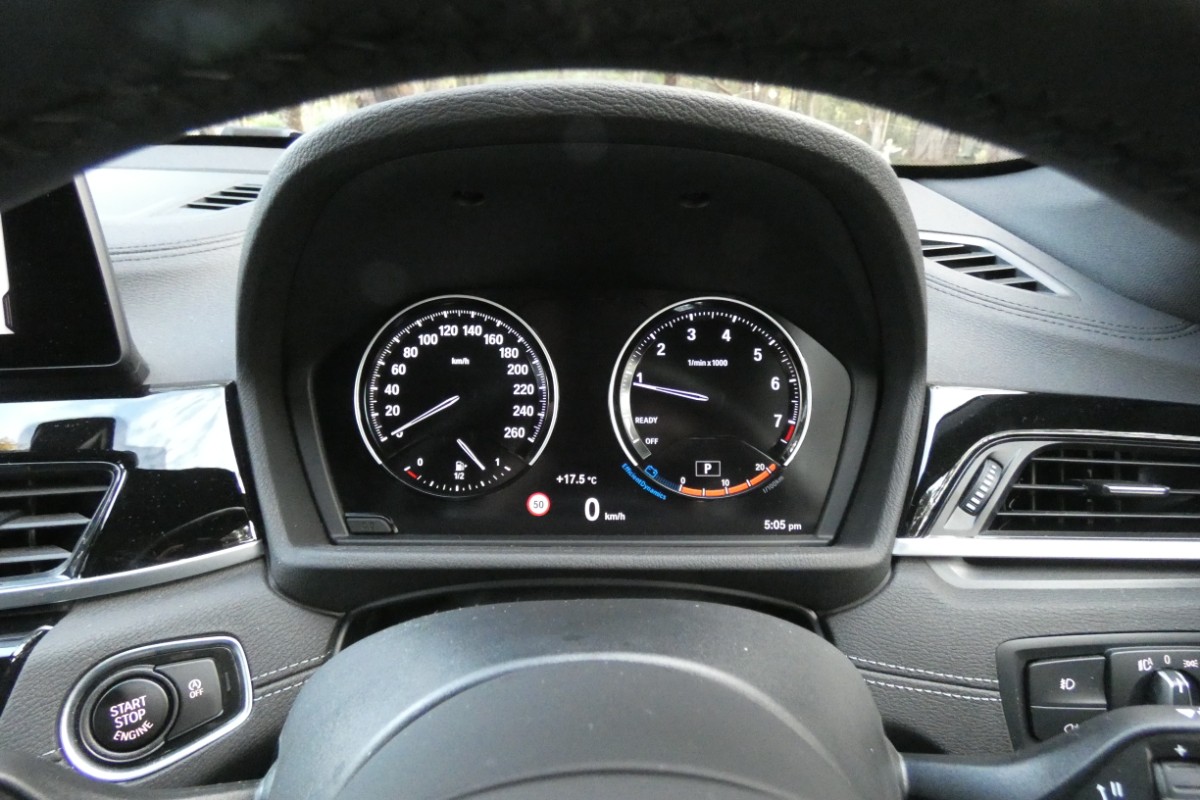 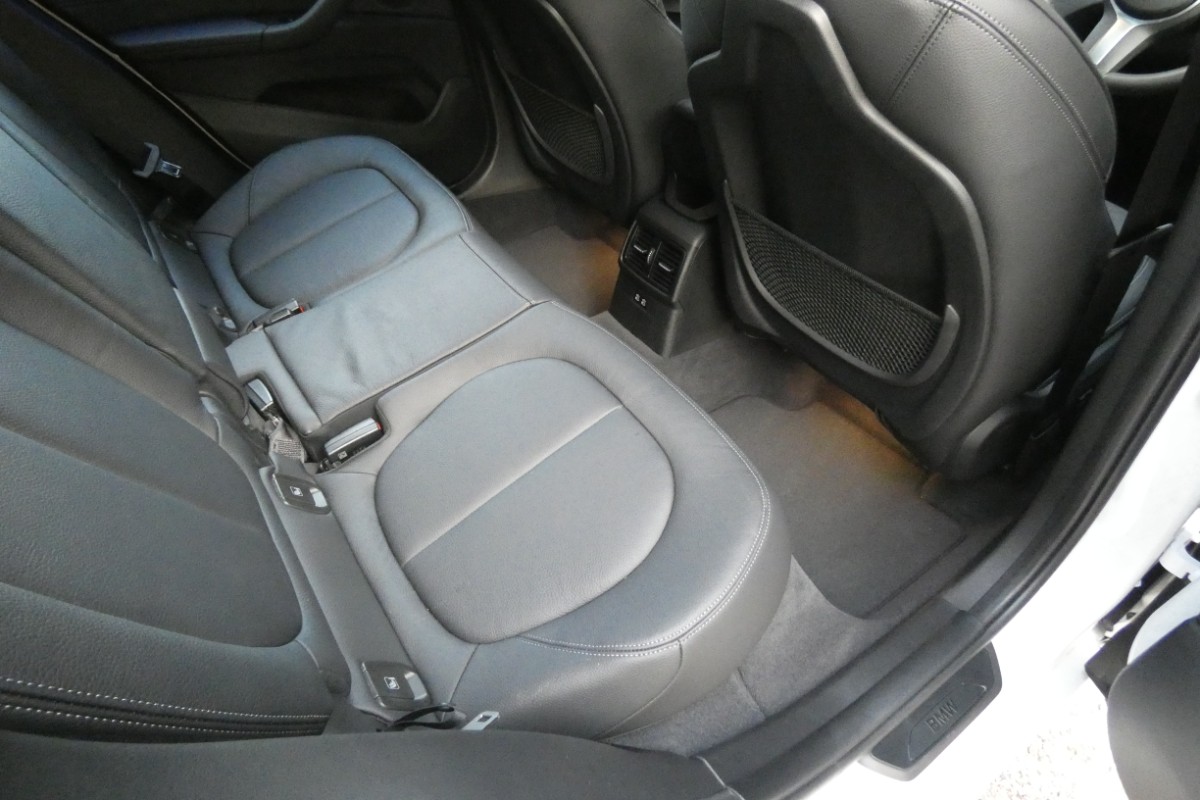 I like the fact it’s a Beemer and it doesn’t disappoint when I plant my right foot.

BUT, while I’m asked to pay a premium to drive the X1, too many compromises are required at the same time — and in a top of the line model.

No spare tyre, no blind spot monitor, no active cruise control, no Android Auto, no speed camera warnings, and a dash that can’t be configured to personal taste — none of these things and a stingy three-year warranty. 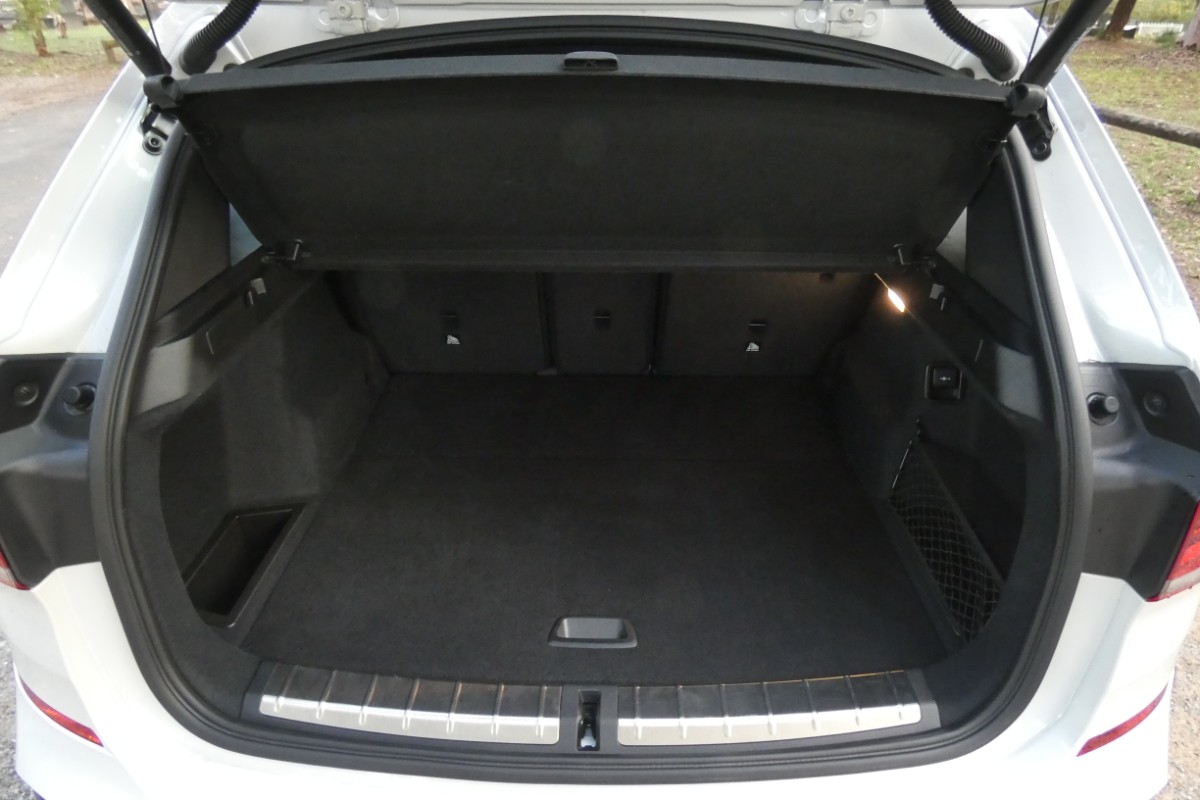 Check out deals on the BMW X1