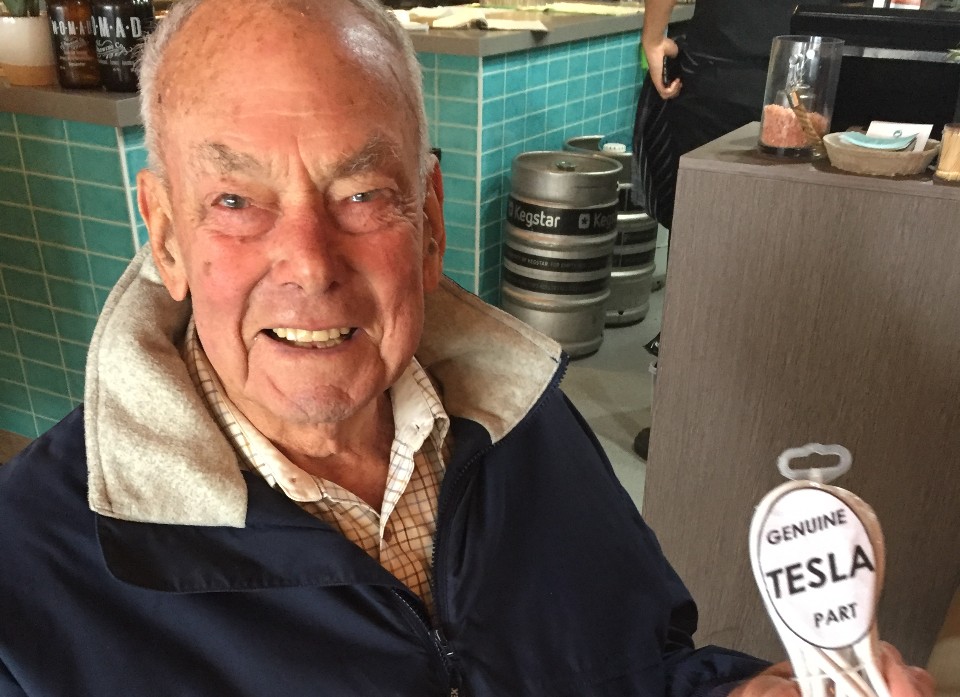 He designed, built and raced his own unique iconic sports car, then created the Goggomobil Dart before acquiring the rights to sell a then inauspicious Japanese brand called . . . Toyota.

His love of innovative technology has never waned.

Bill Buckle designed and produced some landmark Australian sports and micro cars of the 1950s.

Later he became wealthy selling Toyotas, Subarus, Volkswagens and Audis in their thousands from his mega dealerships in Sydney.

But Buckle doesn’t get his jollies reliving the past. He’s what today’s bright-eyed marketing whizzes describe as a “disruptive”, someone who shakes up conventional thoughts with stunning alternatives.

With a curiosity and love of technology no weaker today than 60 years ago, he’s an unabashed fan of today’s electric vehicles.

With a smile, agent provocateur Buckle cautiously endorses the philosophies of author/speaker Tony Seba, a self-styled thought leader and serial Silicon Valley entrepreneur who has declared the industrial age of energy and transportation as we know it will be over by 2030 — maybe before.

Seba (and supporter Buckle) believe that exponentially improving technologies such as solar, electric vehicles, and autonomous self-driving cars will disrupt and sweep away the energy and transportation industries as we know them.

Seba’s predictions suggest that by 2030 all new energy will be provided by solar or wind sources, that all new mass-market vehicles will be electric and that all of these vehicles will be self-driving or semi-autonomous.

Adding detail, he also prophesises the concept of individual car ownership will become obsolete, leading to the car market shrinking by 80 per cent.

Petrol will be obsolete along with natural gas and coal.

Up to 80 per cent of highways will not be needed along with a similar proportion of parking spaces.

On average our cars are parked up to 96 per cent of the time, meaning our asset utilisation in this case is a meagre four per cent – with some of this time spent looking for parking spaces.

The taxi industry will be redundant; car sharing will be commonplace, with the cars in use for 90 per cent of the time.

During 2015, Buckle put his money where his thoughts are. He bought a Tesla P85, the big saloon. And he is smitten. “The most refined and interesting car I’ve ever driven,” he said.

Be assured he has owned plenty of cars in his time, including some fancy stuff. He traded an Audi R8 on the Tesla two years ago.

Let’s back track a little and foxtrot through a great Aussie feel-good story.

Built to the philosophy of light weight coupled to modest power, the Buckle 2.5 Litre proved successful in local racing, holding every hill climb and lap record for GT class sports cars on the east coast.

Of the 20 cars built, 16 were involved in various forms of competition. Today the Buckles are lusted-after collectables.

Developing a proficiency in composite technology, he looked for opportunities with a budget priced brand of car.

“I went to the Goggomobil factory in Bavaria with photographs of the Buckle and our facility, and convinced the owner, Hans Glas, that we could build fibreglass bodies — copying their steel ones — to build the sedan and coupe models using the German 300cc, two-stroke, air-cooled mechanicals and body hardware components,” he said.

“This saved a lot of duty and freight compared to fully built up vehicles, and Buckle Motors produced more than 4000 Goggomobils, including the Dart, which was my unique design.”

The local Goggomobils were big hits, but were killed by the arrival of a phenomenon known as the BMC Mini.

Still, the Dart went on to become somewhat of an icon, due in part to the droll Yellow Pages commercial that features a Scotsman trying to find parts for his Goggo.

Around that time, Buckle Motors acquired distribution rights to Borgward, Goliath, Lloyd Hartnett, Hillman and Humber, adding these brands to a portfolio that included De Soto, Armstrong Siddeley and Citroen.

“We had a nice collection of orphans,” he remarked wryly.

With business booming, Buckle then gambled on becoming one of the first Australian distributors of an unheralded Japanese car brand, in 1964.  It proved a wise decision.

Sales were sluggish at first but history suggests Toyota did find a place in the hearts of Australian consumers.

A foundation driver with the AMI Toyota works team, Buckle raced in the Armstrong 500 and early Bathurst 500s. He also drove in two Redex Trial adventures.

Later his fertile mind created a Cabrio version of the Toyota Celica, and designed award-winning sunroofs.

Eventually he built an empire of new-car dealerships on Sydney’s northern beaches, selling Toyotas, Subarus, Audis, and Volkswagens before flogging everything to AP Eagers in 2008.

In 2014 the wide breadth of work of this legendary car industry identity was recognised when he was awarded the Medal of the Order of Australia (OAM) for stellar service to the motor vehicle industry as a designer and retailer.

You get the picture. Buckle is a car guy, pure and simple. Was, and is.

He retains a deep interest in clever, exciting motor cars. He enjoyed driving his R8 until seduced by the engineering, eco-friendliness and performance of the Tesla.

Sharing his garage with the P85 and one of his rare Buckle sports cars is a hybrid Toyota Prius C. He’s a fan of hybrids . . . Even his cavoodle dog is a hybrid.

Still, he recently bought a new VW Golf GTI Performance as a bit of a nostalgia trip back to old-fashioned internal combustion engine technology.

But the big, rear-drive Tesla saloon rings his bell and appeals to his technical curiosity and his love of sporty character. It’s capable of 0 to 100km/h in 5.6 seconds.  “That’s plenty of go for me.”

So impressive is the P85 that it has transformed Buckle into a rabid and unapologetic warrior for electric vehicle transportation.

Over lunch, he quickly reveals an active, ever enquiring mind. He wants to talk about Formula One, Le Mans racing and the Australian GT series. And Pikes Peak.

“See where an electric motorcycle now has the record up the Pikes Peak hill climb?” he asked.

Yep, and EV prototype cars are getting ever closer to Sebastien Loeb’s outright hillclimb record.

Few doubt that in another year or so, an EV will be the outright Pikes Peak record holder; making just as much power and torque in a vacuum as they do at sea level — electric motors don’t have the same altitude problem as cars with combustion engines.

In search of a reaction from owners of old-fashioned vehicles, Buckle insists there is no good reason for today’s cars to have an engine with all those moving parts, or exhaust system and mufflers. Nor a gearbox and tailshaft.

“[Tesla creator] Elon Musk is such a clever man. I keep finding wonderful ideas and tricks in my car. The door handles pop out to shake my hand as I approach it in my garage.

“And because it has the Smart Air Suspension option, my grandson has programed it so when the GPS tells it we’re approaching my daughter’s home with its difficult driveway, it magically rises on its suspension for better clearance.”

Buckle also appreciates the clever centimetre countdown dash display of the P85’s parking sensors, which is way more accurate than many other cars of his experience.

The P85’s claimed range after a recharge is about 500km. Buckle says it’s certainly good for about 400km around Sydney’s suburbs. He recharges the Tesla at home, having installed a 40-amp circuit for fast top ups. Programed to charge off peak, the Tesla is topped up about once a week.

You need not ask if Buckle collects much of his household power from solar panels. He also has a Tesla power battery installed at home to store the sun’s energy.

Still, Tesla ownership is not yet perfect. “What Tesla needs to do is get on with the task of making more supercharge points between capital cities. That’ll fix owners’ range anxiety.”

Buckle is clearly smitten with his four-door Tesla, though he has a couple of criticisms.

The wipers are not fast enough in heavy downpours. He’s not thrilled there have been reports of Teslas catching fire either.

Back to the positives, and the technology that he is so enamoured of. The boot is massive. No fuel tank, exhaust or tailshaft to take up valuable space.

No gearbox either. For the Tesla to reverse, the electric current is simply switched to make the motor spin in the opposite direction.

“I hardly have to touch the brake pedal; when you lift off the accelerator, it instantly slows and also recharges the batteries using kinetic energy.

“There’s no such thing as a service book. What’s to do? No oil changes, no filters, the brake pads don’t wear . . .” declared this passionate, ever-curious automotive New Ager — now 91 years young.

Little blue Beetle back in the fold