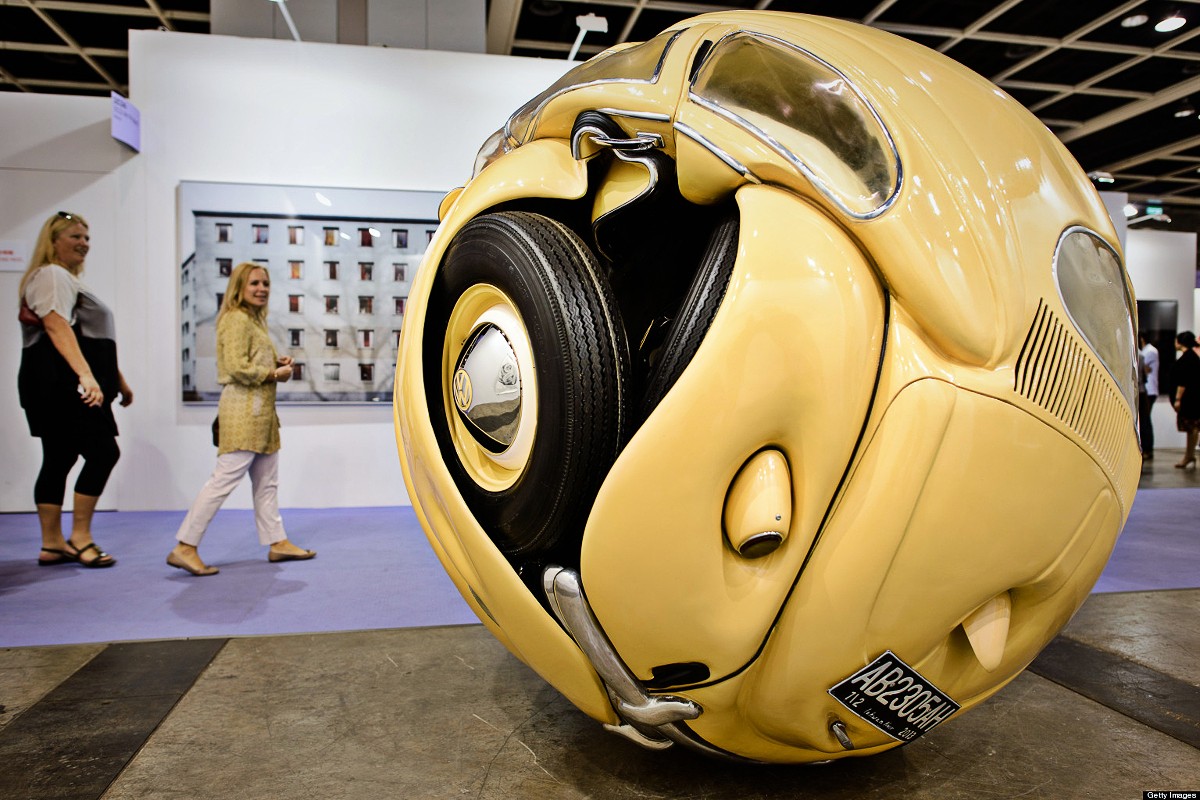 Home
Wheel life
Beetle one day, a perfect sphere the next

He takes them and transforms them into perfect, life-sized spherical works of art.

To achieve this, Noor combines parts from real a 1953 Beetle with polyester and aluminum.

To avoid damage to the cars, he carves a spherical, polyurethane replica of the body which he then casts in aluminum.

A separate spherical interior is then produced to fit the cast exterior.

The final result is enhanced with original car parts provided by the manufacturer.

Born in 1963, Noor is a Professor of Fine Arts at the University of Yogyakarta and is known to his contemporaries as “The Maker”.

He is renowned for his large-scale sculptures of hybrid human, animal and technological forms.

Recent works have also included components transformed through the processes of casting and welding.

Noor has explored the theme of transport in previous works featuring objects and figures in motion.

His sculptures reflect an interest in a combination of man-made and organic ingredients, in which human or animal forms are supported by or merged with technological attributes.

Increasingly, however, the artist has focused exclusively on the man-made, modifying different vehicle components into new, simplified shapes in which their original function is challenged.

In 2011, Noor was included in the group exhibition Art Motoring: Motion and Reflection at the National Gallery of Indonesia in Jakarta.

An initiative of the Indonesia Classic Car Owners Club, this exhibition paired 45 classic cars with 85 works by Indonesian contemporary artists who responded to the vehicle designs.

It was here that Noor presented the Beetle box, his first work in the Volkswagen Beetle series, which featured the car crushed into a cube.

The Beetle Sphere, one of his most iconic pieces, takes the vehicle’s iconic curves to the extreme.

Responding to the car’s loaded political history and signature design, the work features the 20th century design classic warped into a sphere comprised of authentic and fabricated components.

“The idea emerged from a personal perception towards objects that are products of a ‘transport culture’, which induces a hint or signs of spiritual emotion,” he said.

“To behold a vehicle is to have a ‘magical’ identity. Sculpture represent the interaction between humans and the object realm, with strong spiritual tension that affects the subconscious, and that yields a new ‘animistic’ attitude.”

Be sure to check out Noor’s other work — it’s just as amazing.

CHECKOUT: Domino’s deliver(ed) — in a Beetle