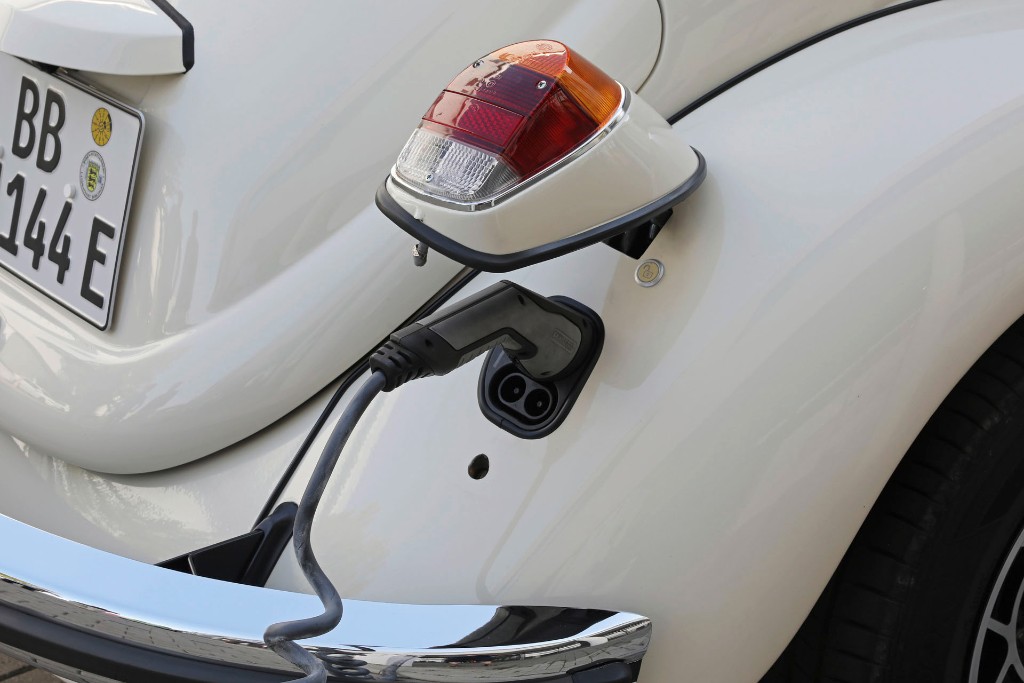 Beetle back with electric motor

Home
Charging ahead
Beetle back with electric motor

JUST when you thought the VW Beetle had finally been squashed – guess what?

Yep, a Volkswagen subsidiary has gone on display at the Frankfurt Motor Show with a neat cabrio version, and it may well go into production.

Mind you, there is a rather big difference between the powertrain of what we know as a regular Beetle and the concept. The latter has done a Thoroughly Modern Millie and come up with an electric motor.

The Beetle is still very much discontinued, the last ones having come off the production line in South America a couple of months ago, but VW has teamed up with specialist company eClassics to create a reimagined version of the classic Bug.

The e-Beetle, as it’s known, or e-Käfer in German, has a a 36.8kWh lithium-ion battery in the car’s floor, and, unlike the sputtering flat-four benzin-sippin’ motor of old.

No, that iconic powerplant was replaced was replaced with the motor and transmission out of a plug-in VW e-Up, which was released in Europe five years ago.

Remember the Up? It arrived in 2012 and was only on sale in Australia for a short while, phased out because it came a tad too close in marketing to the Polo.

But it remains a popular model in other parts of the world. Oh yes, VW insisted on it having an exclamation mark, so, in VW-speak it was a Volkswagen Up!

That means the e-Beetle is now equipped with a 60kW electric motor.

To accommodate the added mass of its electric drivetrain, eClassics had to reinforce the Käfer’s chassis and upgrade the brakes. As a result, the e-Beetle tips the scales at a rather portly 1280kg.

However, despite the extra mass, the e-Bug is still relatively nippy, with a claimed sprint from 0-80km/h (a new measure for us) taking 8 seconds. It suggests the more customary 0-100km/h measure might take about 12 secs.

The e-Beetle boasts an electric drive range of 200km, which should be adequate for most needs, but if it runs short of juice, it can be charged for an extra 150km in just one hour.

So take a magazine and some sandwiches along while you wait for the power to trickle through to the battery.

“The electrified Beetle combines the charm of our classic car with the mobility of the future” Volkswagen Group spokesman Thomas Schmall said.

“Innovative e-components from Volkswagen Group Components are under the bonnet — we work with them to electrify historically important vehicles, in what is an emotional process.

“We are also providing Beetle owners with a professional conversion solution, using production parts of the highest quality.”

The idea of an electrically powered classic car is an appealing one, and something that VW likely will explore more in the future.

Particularly interesting is that the company says it is developing an electrified version of the VW Microbus, and is considering an e-Porsche 356.