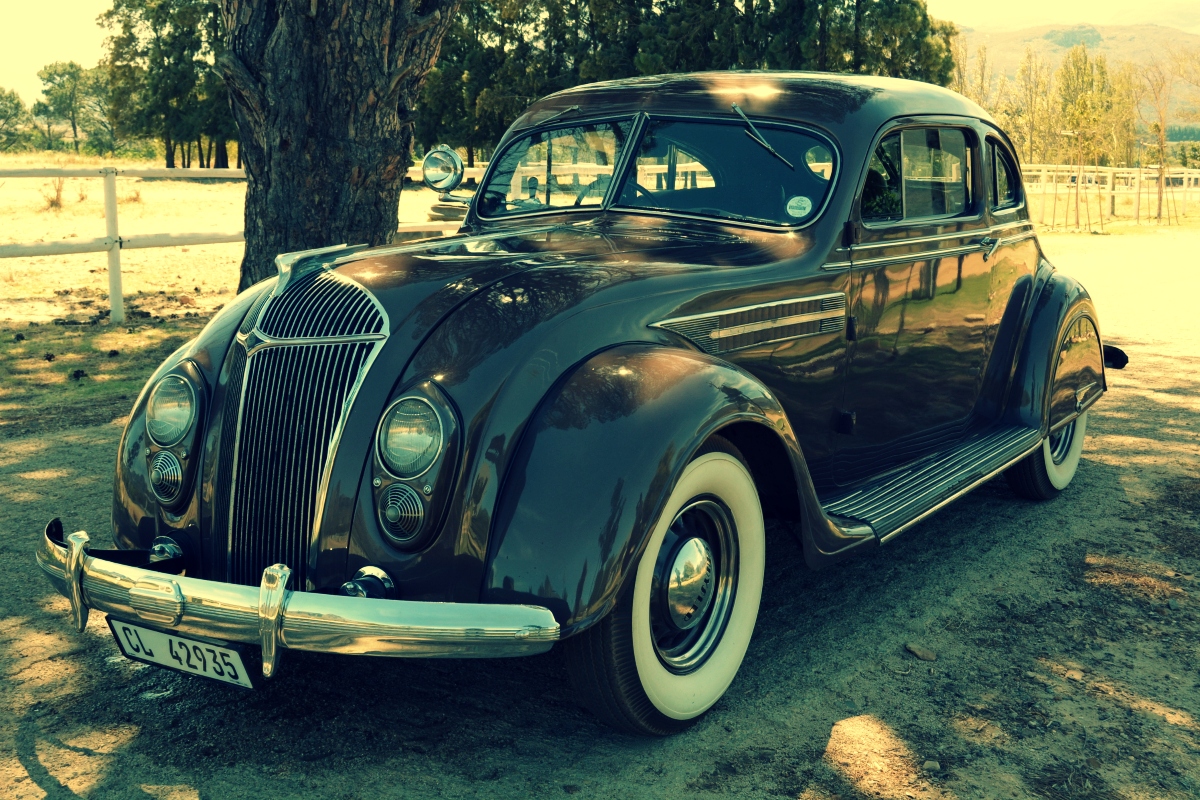 Chrysler’s radical aerodynamic approach was too advanced for its time

In the mid-1930s, Chrysler Corporation’s design path went into a streamlining phase, with models boasting smooth, flowing contours rather than the more formal, boxy, upright shapes that preceded them – and which continued in production to satisfy more conservative-minded motorists.

Art Deco was also in its prime at that time and Chrysler saw fit to combine the two influences to produce a new style of car for a population still recovering from the effects of the Great Depression.

It was called the Airflow.

By April 1930 it was reported that at least 50 scale model concepts had been tested with the cooperation of pioneer aviator Orville Wright.

Results found the then current, two-box shape was aerodynamically inefficient — but discovered it was actually more efficient turned backwards.

Prior to the Airflow’s debut, Chrysler engineered a publicity stunt in which they reversed the axles and steering gear, that allowed a prototype to be driven ‘backwards’ through Detroit.

The stunt caused a near panic, but the marketing department felt that this would send a message that Chrysler was planning something big.

The car that emerged was like no other American production car to date.

So it was in 1934 that Chrysler introduced the revolutionary aerodynamic Airflow styling on its Series CY, CU, CV, CX and CW platforms.

To further promote the concept, the company promptly set about setting 72 stock car speed and endurance records at Daytona Beach in a 4.9-litre straight-eight CU Coupe.

But it was not solely about aerodynamic efficiency.

Applying what they had learned about shape, the engineers also began looking into ways that a car could be built, resulting in a unitary construction being adopted.

This not only strengthened the structure but reduced weight, thus increasing the car’s power-to-weight ratio.

The engine was positioned more over the front axle line and passengers were seated within the car’s wheelbase, to the benefit of weight distribution and handling.

However, the new manufacturing processes required an unprecedented number and variety of welding techniques, which resulted in quality problems.

As a result, production peaked at 6212 units in May, barely enough to give each dealer one Airflow each.

And while sales were respectable – 11,292 were sold in the model year – they were not meeting Chrysler’s expectations — and outsold by the company’s more traditional models at a time when the country was still suffering from the effects of the Great Depression.

Airflows continued through 1935 but with different code numbers: C1, C2, and C3 — and into 1936 with yet another change in codes: C9, C10, and C11. More conventional models in the range were now called Airstream.

In South Africa, the Franschhoek Motor Museum’s Airflow Coupe featured here is an example from that period.

It is a C9, which is essentially the base model. The more upmarket C10 was tagged Imperial and the C11 Custom Imperial – and the body number suggests only 10 more were built after this one in that model year.

In fact, being a coupe makes it quite rare as only 110 were built during 1936MY, the lowest in the coupe’s four-year life span during which a total of 1379 were manufactured.

I suppose today the overall shape would be described as organic – defined as ‘being made of parts that exist together in a seemingly natural relationship that makes for organised efficiency’.

From the tall waterfall grille to the tapering tail, there is fluidity to the shape that only the modestly raked split windscreen disrupts.

Even the fenders are semi-integrated into the body – running boards are the only styling feature carried over from established practice of the time.

The Art Deco influence – some of which embraces bold geometric shapes and lavish ornamentation – can be seen in the design of the bumpers and overriders, the headlight nacelle, bonnet-side air vents, twin chrome strips along the waistline, rear wheel spats with their winged embellishment, and ‘rocket-ship’ tail-light lenses.

Inside, the theme continues with the design and detailing of the dashboard controls and instruments, the steering wheel and even the ashtrays in the rear seat outer armrests.

There is a novelty aspect in the way the markings on the speedo also show the revs relevant to the speed.

Everywhere you look there is something to be admired – elegance AND function.

Oh, and the ‘hooter’ was an attention-grabbing wolf whistle!

Turn the key, press the button and the flathead straight-eight eases into life with a slow, steady tickover.

Select first, release the pistol-grip handbrake and the Airflow moves calmly away.

With such a long wand, there is a lot of movement selecting gears of the three-speed box but, once the white-walled tyres are rolling, with so much torque on tap progress is entirely fuss-free.

A free-wheel was standard and overdrive was an option.

Steering is naturally heavy and low geared and the ride is firm, but the very nature of the car creates a feeling of well-being.

Hydraulic drum brakes all round are well up to the task.

But Chrysler’s styling concept was doomed not to succeed.

Poor sales from the off led to Chrysler toning down some of the bodywork’s detailing for 1935MY when 7751 units were sold.

For 1936MY a small boot was added, disturbing the car’s inherent aerodynamics.

It did not help. Only 6275 cars were built with only the C10 saloon exceeding a thousand sales.

The following year, flat dashboards with recessed controls, soft door handles and padding on the back of the front seats were introduced as safety features on a range, which was reduced to the Eight two-door coupe and four-door saloon — with a total of 4600 units produced.

But it was the last hurrah. In 1937 the Airflow was discontinued, having failed to capture the imagination – and cheque books – of the people.

The design was considered too advanced, too different at a time when Americans sought stability rather than innovation.

Quality issues with production of the all-steel body – a rare item at the time – was also a negative.

Sadly, Chrysler’s bold move was short-lived and proved to be a step too far ahead of its time.

The wind-cheating survivors serve only as a stylish reminder of what might have been.