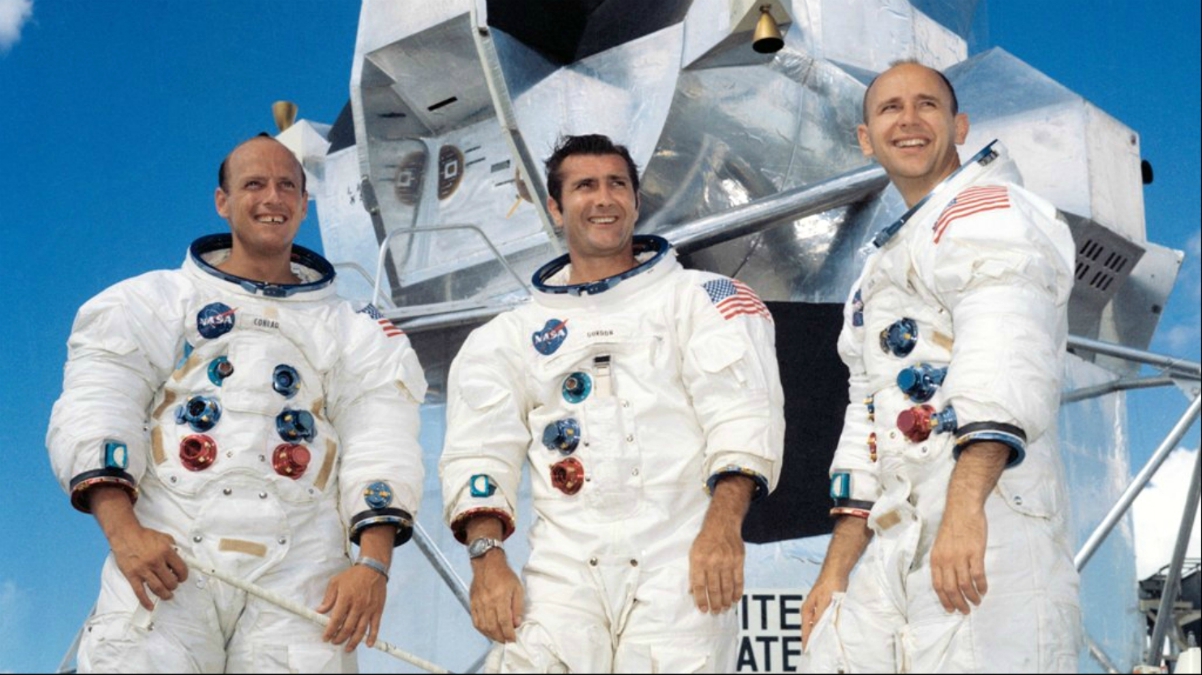 It’s 50 years today since Apollo 12 touched down on the Moon.

Sandwiched between Neil Armstrong’s epic Moon walk and the aborted Apollo 13 mission, it has almost become the forgotten Moon landing.

Given that Apollo 11 launched in mid July, it still stands as an amazing feat that NASA and its teams managed to launch Apollo 12 just four months later.

The crew of three was a mix: veteran Charles “Pete” Conrad with three previous flights, Richard F Gordon who had flown just once before and would remain in orbit as the Command Service Module pilot, and Alan L Bean — it would be Bean’s first space flight.

Gordon had been Conrad’s co-pilot on that second mission.

Bean had originally been targeted by Conrad to be part of his team in 1967 but flight operations manager Deke Slayton had denied him.

Clifton C Williams was slotted in but perished when his T-36 jet crashed in October of 1967, allowing Slayton to bump up Bean.

In keeping with the tradition of naming their craft, the lunar module was named Intrepid — the command module, Yankee Clipper.

The three astronauts and their 110 metre high Saturn V rocket launched on November 14 at 16:22 UTC.

It was a stormy ascent, with cross winds measured at 281km/h.

More notable was the fact that the launch vehicle, as the whole assembly is known, was struck by lightning — not once but twice.

The first strike occurred 36.5 seconds after launch, with the discharge finding its way to earth via the ionised air inside the exhaust plume.

It also put most of the LM and CSM (lunar module and command service module) instruments off-line.

A second bolt just 16 seconds later put the attitude indicator off-line, however the Saturn V kept to its straight and true path into space.

Now powered by batteries, not the energy from the fuel cells, an AC inverter tripped — unable to cope with the overload.

Here NASA learned a valuable lesson: the launch load on the electrical system was 75 amps but it was feeding through a 28 Volt DC system.

Back on the ground was John Aaron, the Electrical, Environmental, and Consumables Manager, or EECOM.

He’d seen the numbers and warnings aboard Apollo 12 during a test, after a power failure in a supply system, part of the CSM signal conditioning electronics (SCE).

Aaron jumped straight on the radio, advising the crew: “Flight, EECOM. Try SCE to Aux”, which switched the SCE to a backup power supply.

Only Bean knew of this rather obscure switch in the cabin, and that was as a result of a simulation test that, luckily, covered virtually the exact same situation in which the crew found themselves.

With power and telemetry restored, the crew enjoyed a relatively uneventful flight to the Moon.

Mission Control was concerned the strikes may have damaged the explosive bolts that were needed to fire the braking parachutes on their return to Earth.

Wisely, this information was not immediately passed on to the crew.

November 19 and the crew made a successful landing on the dusty surface of the Moon.

Importantly they had landed within walking distance of their predetermined landing site.

Here they found the probe Surveyor-3, which had landed in April, 1967.

The landing itself had been on autopilot until Conrad assumed manual control, with just a few hundred metres left of the descent flight.

Conrad was heard to remark, at 11:44 UTC, as he made his mark in the dust: “Whoopie! Man, that may have been a small one for Neil, but that’s a long one for me.”

Conrad was somewhat shorter than the lank Armstrong, meaning the jump down from the lower step of the ladder was a bigger effort.

It was also a calculated sentence, because Conrad had made a $500 bet with a reporter (but he would never be paid for his remark).

Part of the equipment for the mission was a colour television camera.

It took Bean a matter of seconds to accidentally destroy the camera’s vision sensor.

This effectively killed any television coverage of their 7 hours and 45 minutes time on the surface.

Bean compounded his gaff by leaving exposed rolls of film on the Moon’s surface.

Gordon, aboard the Yankee Clipper, took multi-spectral photographs of the lunar landscape.

November 20 and the Intrepid made a successful lunar ascent, reuniting Bean and Conrad with Gordon.

An extra day was taken in lunar orbit with further visual work and photographs before firing the return stage rockets that resulted, as it turned out, in an uneventful landing for the craft.

In a touch of irony, or perhaps cosmic karma, a 16mm film cartridge was dislodged during the re-entry and hit Bean on the forehead, knocking him out.

Apollo 12 has become somewhat of a forgotten mission, thanks to the success of the Apollo 11 mission that preceded it, and the near-tragedy of the Apollo 13 launch that followed.