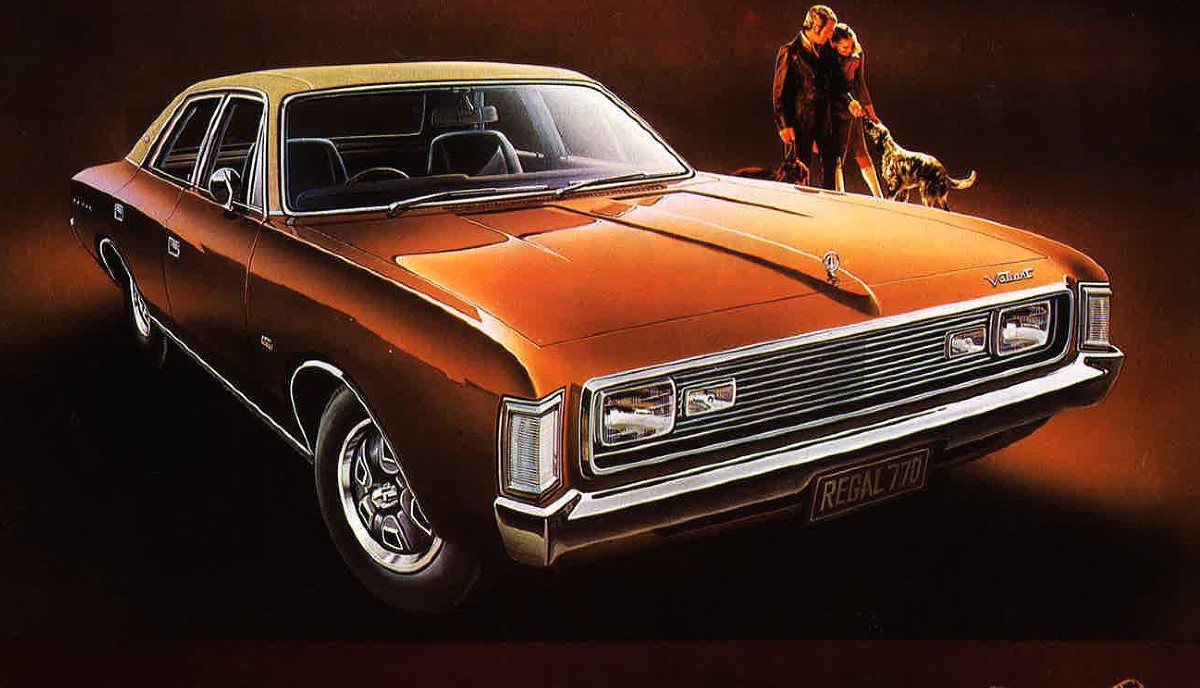 Come this June, 2021 it will be 50 years since Chrysler Australia released their first All Australian Valiant: The VH.

It was a unique moment in our automotive history, because between June, 1971 and March, 1972, for the first and last time Chrysler, Holden and Ford — the Big Three — presented new, “All Australian” versions of the affordable family car — all based on a 111 inch/2819mm wheelbase.

The HQ Holden appeared in July.

The XA Falcon was last, debuting in March 1972.

In those days Holden commanded 33 per cent of the market, Ford was climbing beyond 22 per cent and Chrysler languished at around 12 per cent.

I couldn’t wait to see the VH Valiant in the metal.

I’d read and re-read Modern Motor which had run a scoop on the VH in its April, 1971 edition.

Since their arrival in 1962, Valiants had been a mildly re-styled amalgamation of the American Dodge Dart and Plymouth Valiant.

Their sheet meal was mostly sharp edges and straight lines, so an all-new Valant was eagerly anticipated.

When I walked into the Chrysler dealership after the VH’s release it was full of sedans and wagons featuring Chrysler’s corporate “fuselage” styling theme.

They looked long, wide-hipped and bulky.

This was a significant change to previous Valiants, which had clean cut, straight-edged styling.

The new cars had a distinctive wedge shape in profile, with a rising beltline that was at least two inches/51mm higher than the preceding model.

A small window area, thick pillars, wide door frames and a crease line slashing from the front door to the rear fenders in a long arc accentuated the “fuselage” theme ended in a droopy looking rear end.

I recall sitting in the back seat of a Ranger XL sedan on the showroom floor and thinking how closed-in — how submerge I felt.

I did not relish the prospect of riding in the back on a long journey.

The VH styling program began in the American design studios of Chrysler in Michigan, in late 1967.

It was supposed to be a carry-over design based on the existing VE/VF/VG Valiant platform.

But at the top levels in Chrysler Australia, different ideas were forming, motivated by an ambition to build an “All Australian” Valiant.

Since its debut, Chrysler Australia had positioned the Valiant as a cut above its rivals.

Their strategy of combining the Dart and Plymouth models for Australian tastes was a core skill.

The outcome was a more powerful, better equipped and slightly pricier car than its competitors — but it found willing buyers.

By 1969 this strategy had helped Chrysler reach number three in the market, with almost 14 per cent market share.

Trouble was, this is about as good as it got.

Inside the company there were concerns that being a distant number three made it vulnerable to the likes of Toyota, Nissan and Mazda whose sales were climbing.

Chrysler’s managers could also see the up-sizing of the Kingswood and Falcon in the late 1960s.

Both gained in length, width and wheelbase, and had fresh “coke bottle” styling themes.

They believed the Valiant was being left behind with its narrower body, shorter wheelbase and straight-edge styling.

Never financially robust, Chrysler Australia needed a strategy that would deliver increased sales that would in turn ensure increased financial security and provide funds to develop new models into the future.

A business-critical decision had to be made.

There were basically two strategic choices.

Chrysler Australia could either continue selling American-based cars and hope that buyers would stay with the brand, or strive for more sales and market share by developing its own “All Australian” Valiant, that would match the Kingswood and Falcon on most dimensions.

Chrysler Australia’s team had never taken a completely new range of cars from design to driveway before.

And so, the carry-over proposals were shelved and the new “All Australian” VH package dimensions implemented.

Chrysler Australia’s managing director, David Brown, was given $22 million by his American bosses to fund the entire VH program: sedan, wagon and the long wheelbase coupe and sedan.

This was never enough to fund a full range of cars.

Compromises were made to save money.

And the American inspired styling was not seriously challenged by the locals.

Changes would have cost money.

Brown later took two million out of the kitty to develop the Charger.

In its September, 1971 edition, Wheels magazine called out the issue that mattered most — the styling.

“Chrysler will find out if its brand new and massive wedge styling is good enough to grab suburban dads and fleet owners to send its sales graphs climbing from the present 12 per cent to the ambitious 15 per cent it is hoping for.”

Well, the buying public had a definite view of the VH’s shape.

They delivered a swift and brutal verdict.

The VH’s sales were so low that in 1973 Chrysler’s market share had slumped to 9.5 per cent and the company was now found itself fourth — behind Holden, Ford and Toyota.

Had it not been for the Charger coupe’s success, it is highly likely that the business might have folded sometime around 1972-73.

The XA Falcon sedan and wagon were on the market for only 18 months and attracted more than 111,000 buyers.

The design team had plans to re-shape the car for subsequent models but these never materialised.

Chrysler in the USA could not provide any funding because they too were in a dire financial position.

The little changed VJ and VK models were released in May, 1973 and October 1975, respectively.

In 1976, there were rumours Chrysler would ditch the Valiant and replace it with an amalgam of the newly released US Dodge Aspen and Plymouth Volare.

The September and November 1976 editions of Wheels magazine revealed that editor Peter Robinson had bluffed his way into a market research clinic in Sydney where a Dodge Aspen was being compared to competitor models.

The Aspen/Volare idea came to nothing.

By then Mitsubishi was firmly in command of the company and its future.

The last Valiant rolled off the production line in November, 1981.

I admire the determined ambition of Chrysler Australia that they could succeed with their “All Australian” VH.

But, to fund and develop an entire range of locally designed and built cars against two determined competitors, was beyond their capabilities.

Chrysler Australia’s core skill had been converting American automobiles for tough Australian conditions, adding powerful engines, providing higher levels of equipment and selling them at a higher price than the competition.

Leveraging that skill may have served them better in the long run.

And then there was the VH’s styling.

I think that executives at Chrysler Australia were so focused on achieving their dream of an “All Australian” car, they gave too little attention to the styling and its appeal to mainstream buyers.

As I have written before, styling really does matter.