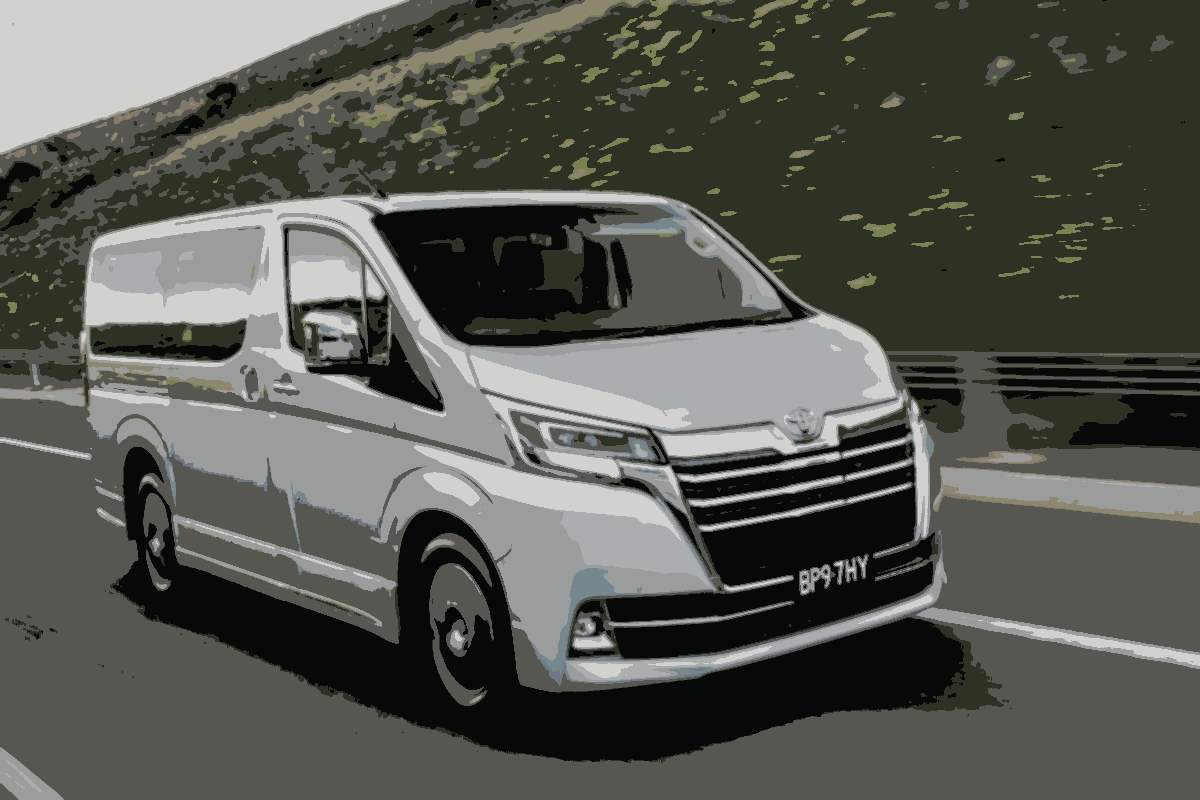 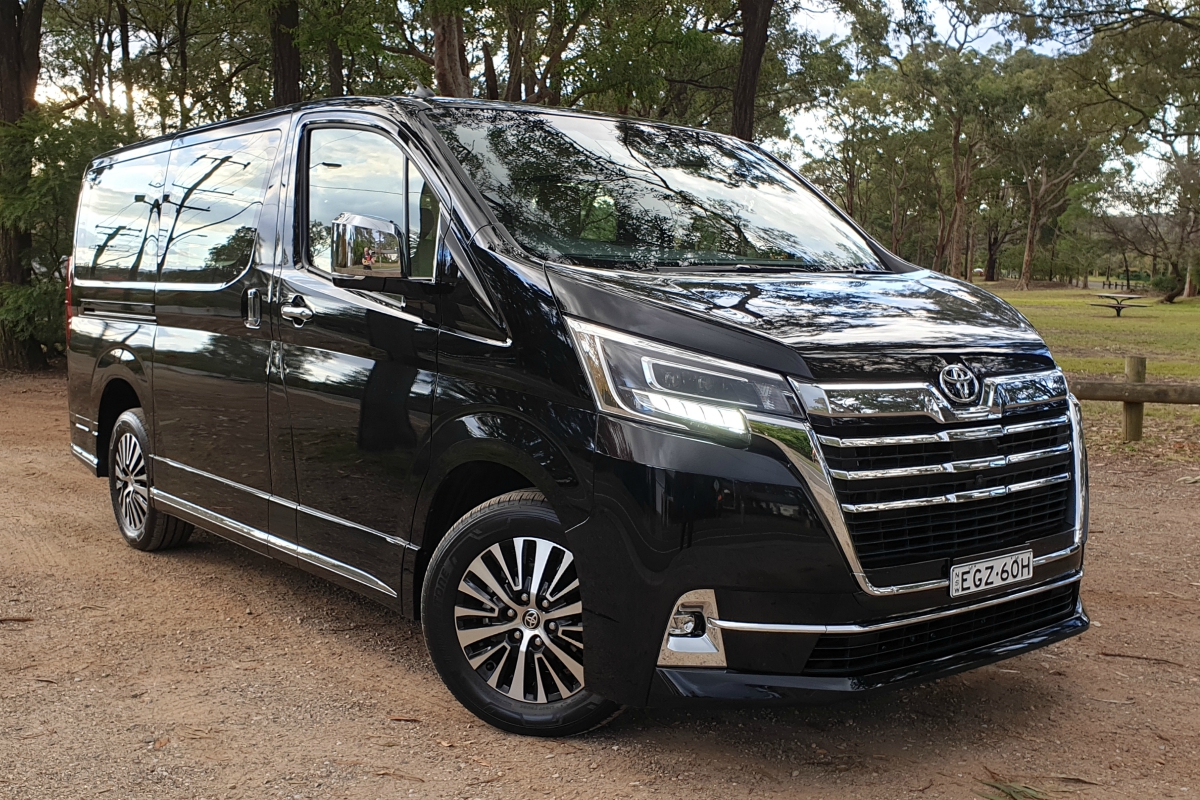 Take a HiAce, gut it and replace pretty much everything, starting with beige leather seats, black carpet, and some fancy tricks for second and third row of passengers — and you have Toyota’s top of the line Granvia VX people mover. 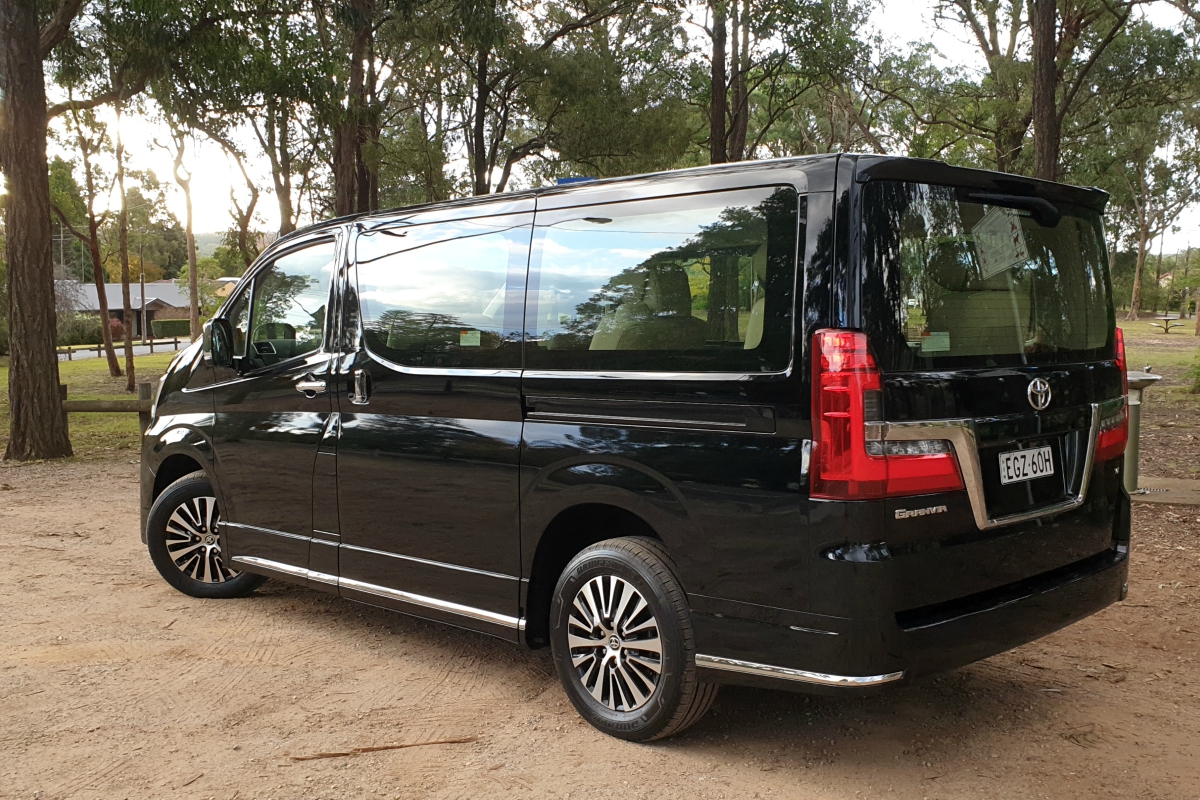 Figure on around $80K or so driveaway, but check the Toyota website for local pricing.

Based on the 2019 spec HiAce, it really is a box on wheels, but it brings plenty of room in passenger mode.

In six-seat configuration, it’s packs more interior room than Dr Who’s TARDIS, with an overall length of 5.3 metres and wheelbase of 3210mm that help a lot.

There is heating for the second row and third row seats, which recline and have fore and aft movement.

The second row also has calf support and fold up drinks holders, with a classy looking, roof-mounted strip behind the front row for second and third row passengers to control the aircon.

Powered sliding doors at either side also equipped with pull up sunshades.

The difference is jarring and discordant with the feel of the rest of the cabin.

Sound is DAB enabled via a Pioneer supplied system and has a surround sound mode.

It’s not quite suited to the size of the vehicle, whereas normal stereo mode worked far more effectively.

Aircon controls are standard in look and operation, while the dashboard is pure HiAce aside from a couple of buttons for things like external camera views and wood inlay ahead of the passenger.

There are USB ports aplenty, with four for the third row, and a pair for the second row.

The exterior came clad in gloss black paint and multi-spoked alloys with Bridgestone Duravis rubber at 235/60/17.

Up front it sports a big, cheesy grin thanks to a chromed, four-bar bar grille.

The the non-powered tailgate mirrors the ‘Vee’ of the front grille.

By the way, the powered side doors can be opened using the remote key fob.

There’s no need to use force, just a simple push back or forth from inside or out. 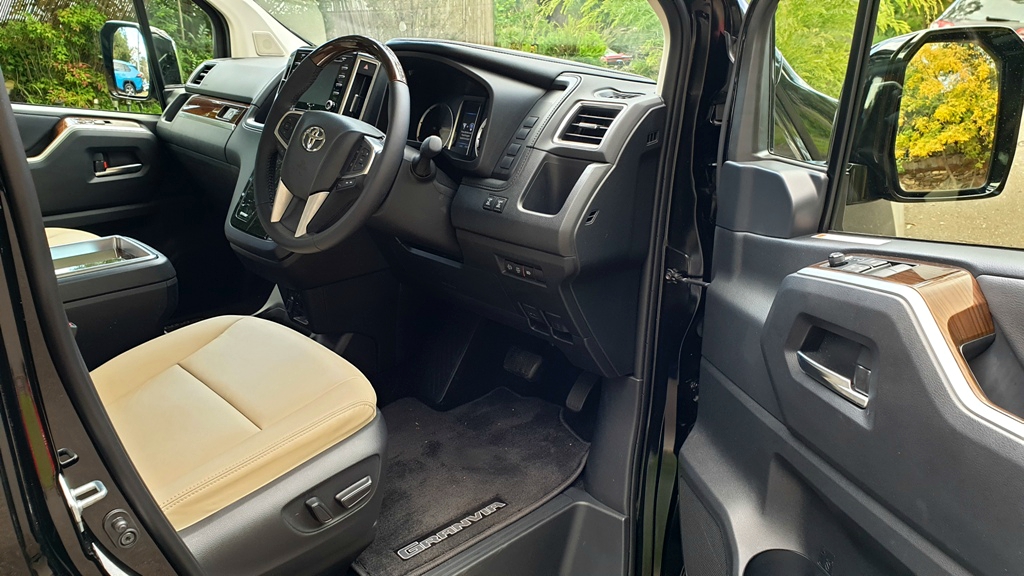 The auto is a six cogger and together they’re a smooth combination, but not one that makes for hurried driving.

The speedo indicates a top whack of 200, but in honesty 120km/h is really as far as it should be pushed.

Steering is light and not entirely confident in its approach to moving the Granvia around.

The driver’s seating position is high and you don’t feel as though you’re piloting a bus — but you still feel “unconnected” to the steering.

It doesn’t feel top heavy, but there’s a sense of uneasiness, a sense of disquiet, about moving the big (2605kg plus fuel and passengers) machine around.

It’s an odd one and annoying in so far as you can’t put a finger on the problem. Here, however, there’s a need to point out this applies to velocities of around 100km/h.

The actual steering feel is a touch on the light side but the power assistance makes three point turns a doddle.

The brakes are grabby, and make the Granvia prone to lurch at low speeds.

So you need to be judicious in their use and it means at times you need to brake further back from the lights or a stop sign.

Lane Departure Alert was a curious one initially.

In normal driving it’s sometimes better to adopt a better line in corners and this involves crossing the white roadside lines.

This was before we twigged to the fact that this leads to a loss of power, and it wasn’t always obvious the line had been crossed.

Some testing was undertaken and the feature was disabled for the duration of our drive. In our opinion, the power loss is likely to trigger a rear end incident. 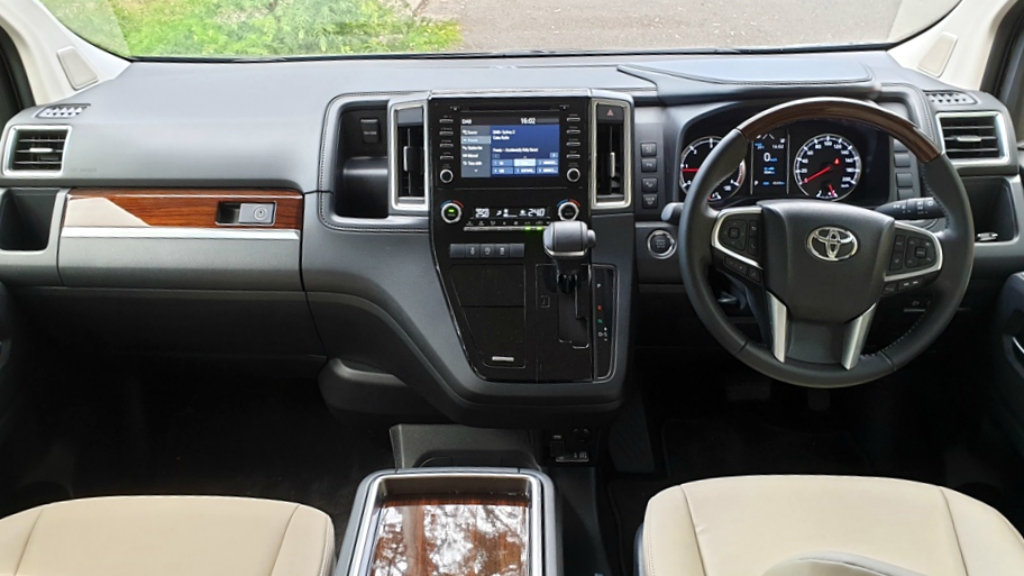 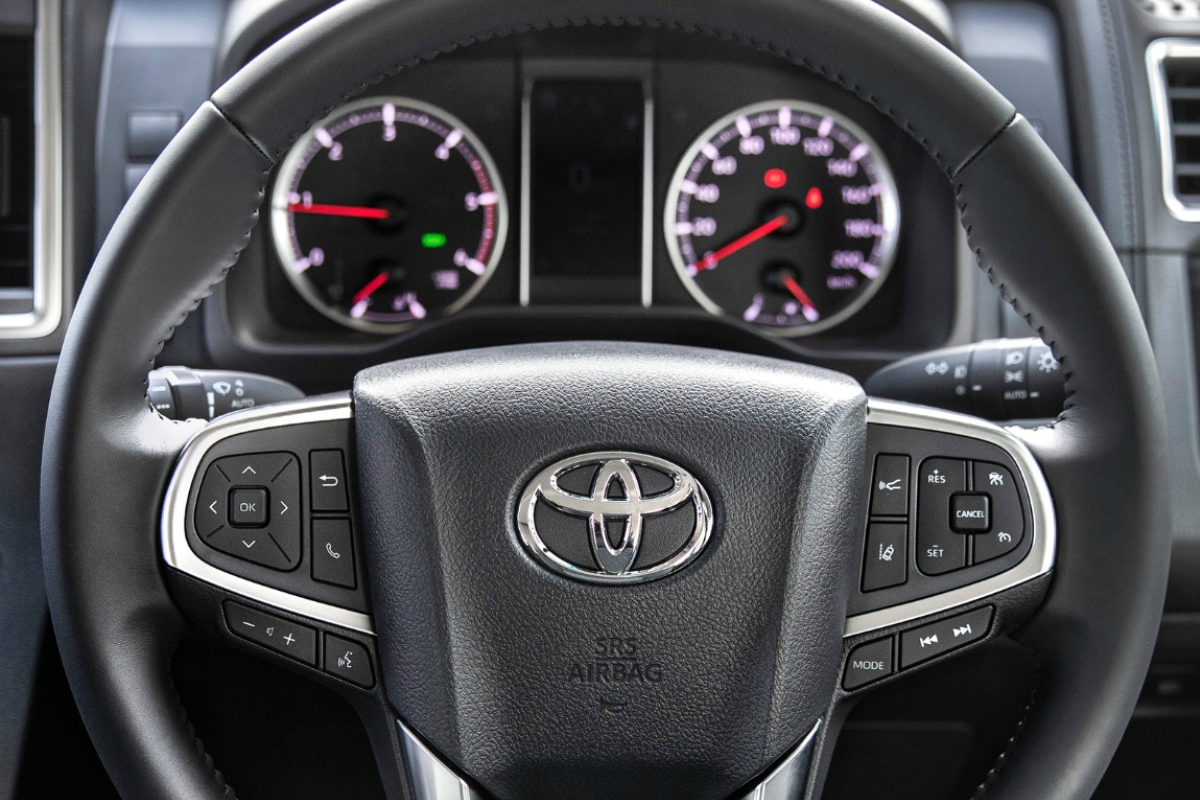 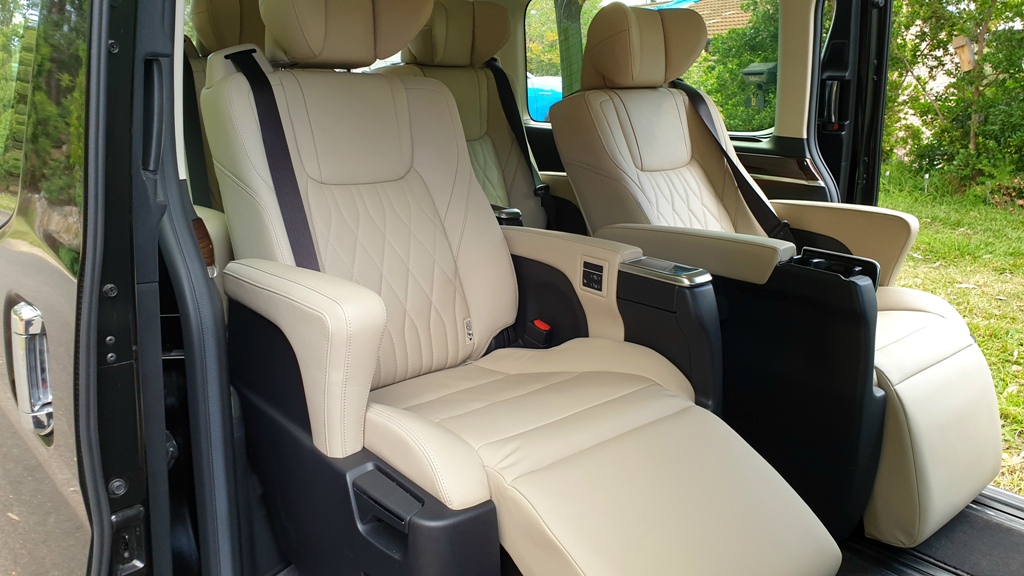 It’s another example of a non-SUV option for moving people around.

The seating options certainly work for the Granvia VX and at this level it is more likely to have Mercedes as a competitor.

Minor detail touches aside, such as the very cheap looking storage bin, the cabin is a sumptuous place. It’s definitely at home in the suburbs, but watch out for that uneasiness at 100-110km/h.

Sadly, however, it appears the best market for the Granvia VX isn’t family transport, but rather as an upper luxury airport taxi. And, as such, it has apparently found a strong niche for itself outside of Australia. 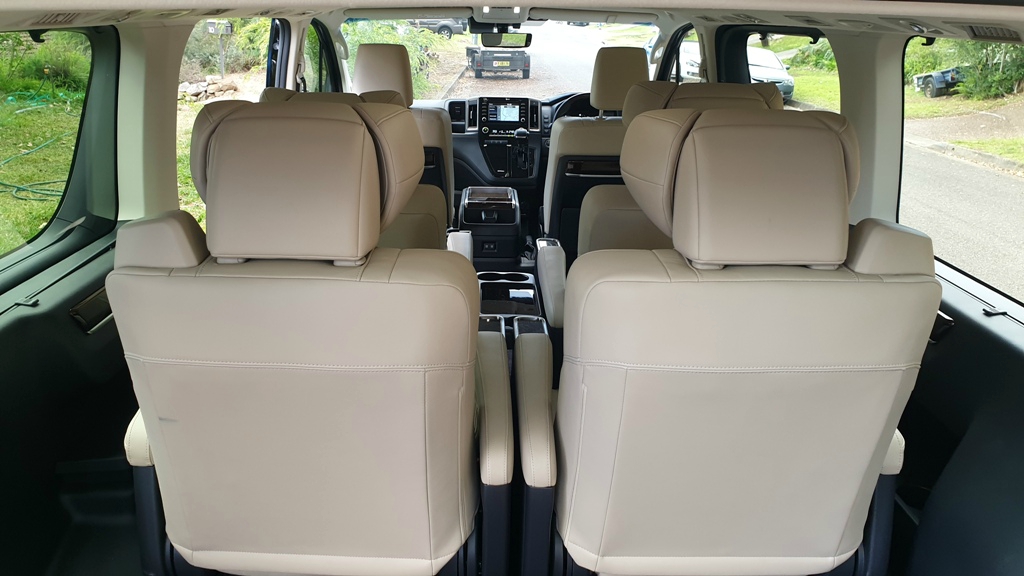