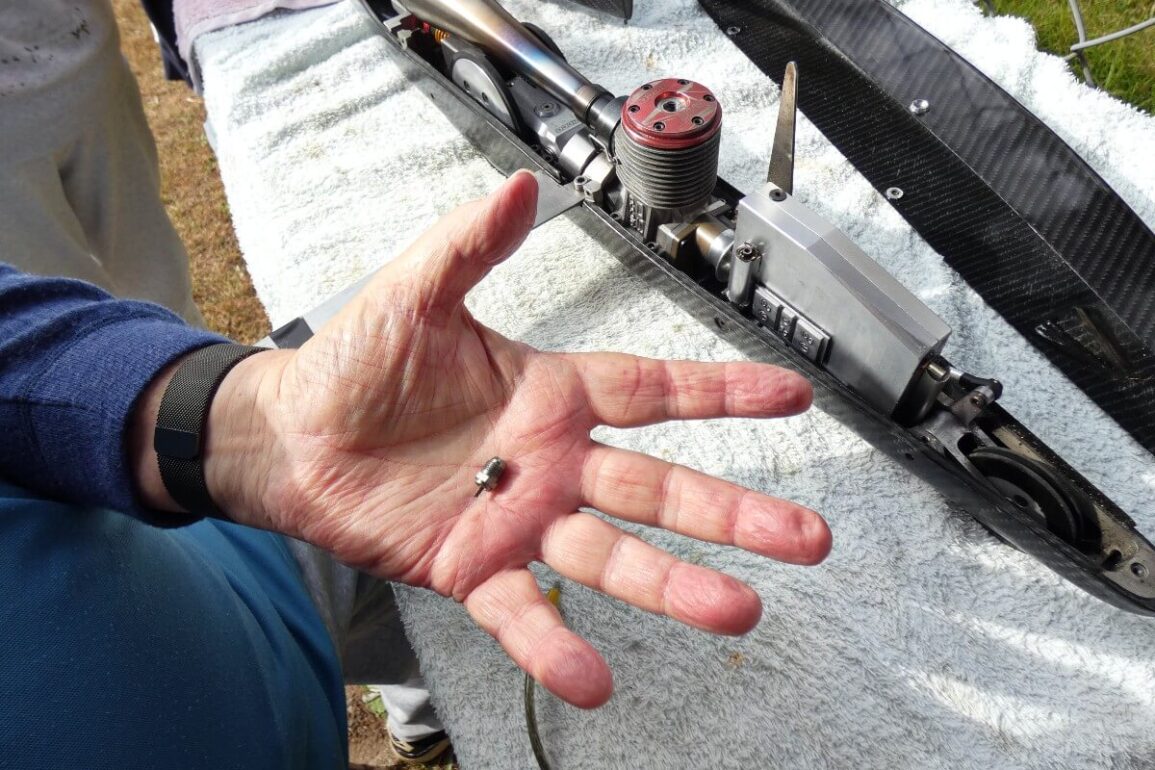 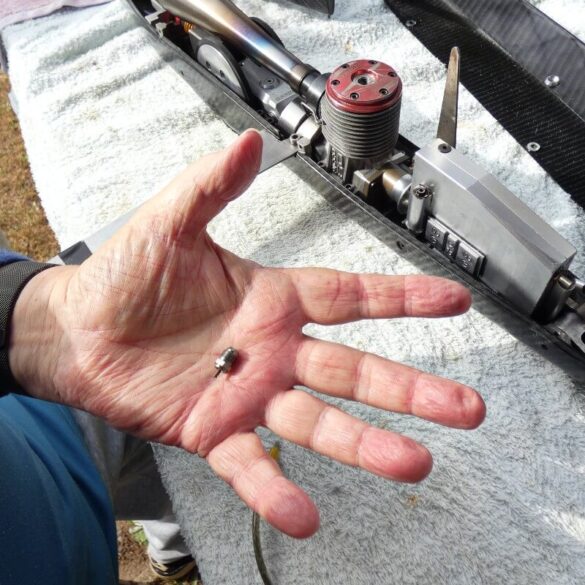 A Glo plug as used in most engines these days.
Memory lane
6 min read

Tether cars a blur at more than 300km/h

As a kid growing up in the 1960s I remember watching small, noisy airplanes powered by tiny petrol engines that flew around and around in a circle — attached to a wire.

They called them control line flying models, although I didn’t know it then. I was just a kid.

I guess they were the forerunners of the sophisticated “drones” and radio-controlled planes that we see buzzing around the sky today — and having to legislate against.

Back then, I had no idea there were also tiny race cars based on the same principle that raced around purpose-built circuits, tethered to a central pole.

In fact, I didn’t find out about ‘tether cars’ until quite recently when I spied a model car sitting in a curiosity shop, hidden at the end of a shopping arcade in the NSW South Coast of Berry.

I discovered the car that I was admiring was actually a copy. That the real thing, should you be lucky enough to find one buried in the garage, could be worth as much as $25,000.

And what about boats. There were tether boats too!

Tether cars are small, usually less than a metre long, weigh anything from 900 grams up to 2.7kg and are powered by a model aircraft engine with self-contained fuel tank.

Since 2015, however, electrically-driven cars, powered by batteries, have also started to appear (but not in Australia yet).

A metal bar called the “panhandle” protrudes from the side of the car and this is where the control wire is attached.

Tether cars are damn quick too, in fact quicker than most real-life cars.

The world record stands at just over 347km/h, set in 2019 at the world championships held in Brisbane.

A lap of the circuit takes just 0.65 seconds and at full speed these cars are pulling something like 90Gs — or 90 times their own weight.

Wow. You wouldn’t want one breaking free of its wire . . .  but it’s been known to happen.

After a couple of false starts, we finally caught up with one of Australia’s the last remaining tether car clubs based at Sydney’s Model Park, located at Luddenham.

In the old days, Australia used to have 12 tracks, but now there’s just the two — Sydney and Brisbane.

They’ve gone the way of slot cars, train sets, model rockets, in fact most of the trappings from what we like to think of as the ‘wonder’ years.

But watching the fellers set up their cars for a run on a rare sunny Sunday morning, it’s difficult not to be impressed, to feel a sense of awe.  It’s not something you see every day.

Although the goal is of course racing, of being the fastest of them all, one gets the feeling the real fun is in building and tuning a winner.

The inside of a tether car is a fine piece of machinery, with its miniature components, rather like the movement of a Swiss watch.

The larger 10cc two cylinder engines run a mixture of 80 percent methanol and 20 percent castor oil and are capable of producing engine speeds of up to 45,000 revolutions per minute.

The fellers explain that you can’t buy a complete car anymore, just the parts, either that or manufacture them yourself.

Buying and rebuilding an old car is another option.

The best engines come from Picco in Italy.

It’s not a poor man’s sport either.

Most of the blokes at Luddenham own about a dozen cars each and they can be worth up to a few thousand dollars a pop.

A blown engine can be costly, with piston kits costing 300 Euros ($450). They tell me they went through four of them one afternoon.

Getting the cars going on cold winter mornings can be problematic.

They don’t like the cold and even once they’re finally up and running, there’s no guarantee they will reach top speed.

The fastest speed we saw that Sunday was 318km/h.

Running flat out the noise is ear-splitting, like being trackside at the Formula 1.

I covered my ears with my hands, wishing I’d brought some ear plugs.

Spectators are drawn to the noise from other areas of the park like moths to a light.

My contact Allan Barnes holds the Australian record in the largest 10cc class with a speed of 341.167km/h.

Another member Mark Osborne has been overseas a couple of times to world championships in Switzerland and the United States.

The cars flash around a circuit that measures about 20 metres in diameter.

All eyes turn to the overhead digital speed monitor as the speed of the cars begin to climb.

Races are won by averaging the speed over eight laps or 500 metres.

To start the car, the driver or a helper pushes the car forward with a stick, turning on the fuel switch.

Another helper, called the “horser”, holds the 10-metre long steel cable off of the ground until the car is going fast enough to support the weight itself, which usually occurs around 130km/h.

To stop the tether car, a broom is used to trip the fuel switch, shutting off fuel to the engine.

One of the main components contributing to the car’s speed is tuning.

The tuning or exhaust pipe not only acts as an exhaust pipe, but also helps to propel the car.

It sucks out unburnt fuel and shoots it to the back of the pipe where it vaporises, forcing some of it back into the engine.

The vaporised fuel adds more power to the engine and helps the car reach top speed, but this effect only kicks in after about 160km/h.

Tether cars were developed in the 1920s to ’30s, but are still built, raced and collected in many countries.

The first unofficial tether car races were held in an abandoned lot in Los Angeles, California, in 1937.

At the height of their popularity in 1949, the sport boasted 440 tracks and some 3000 racers across the United States.

But by the mid 1950s numbers had dropped to the degree that tether car racing had achieved cult status.

By 2008, membership of the American Miniature Racing Car Association had dwindled to just 150 and only three tracks remained.

First made by hobbyists, the cars were later produced in small numbers by commercial manufacturers such as Dooling Brothers (California), Dick McCoy (Duro-Matic Products) and Garold Frymire (Fryco Engineering).

Tom Dooling and his brothers receive much of the credit for starting the whole tether car thing.

After building and flying model airplanes, the brothers decided that they could build a car using an airplane engine.

During World War II, the demand for scrap metal almost brought an end to the hobby.

One of the biggest names in the industry was Colorado’s Cox Models, noted for its miniature internal-combustion engines.

In the 1950s and 1960s it produced a line of hobby-oriented models of cars, airplanes, and other vehicles.

The most noted are the .049 cubic-inch displacement, glow plug, fuel-powered models, controlled by line or radio.

Founder Roy Cox retired in 1969 and sold the company to the hobby conglomerate “Leisure Dynamics”.

It has passed through several hands since then and is now known as Cox International.

Original examples of the early cars, made from 1930s to the 1960s, are highly collectable and fetch thousands of dollars.

There are tracks in Australia, New Zealand, Germany, Switzerland, Estonia, Ukraine, Russia, the United States and other countries.

World Championship races are held every three years, the last in Brisbane in 2019.

The Sydney Tether Car Club meets on the last Sunday of each month at Model Park, Luddenham.

There’s a lot of other things to see there too, including model planes, radio-controlled rally cars and a ride on train for the kids.

CHECKOUT: When the motorcycles roared and charioteers did battle