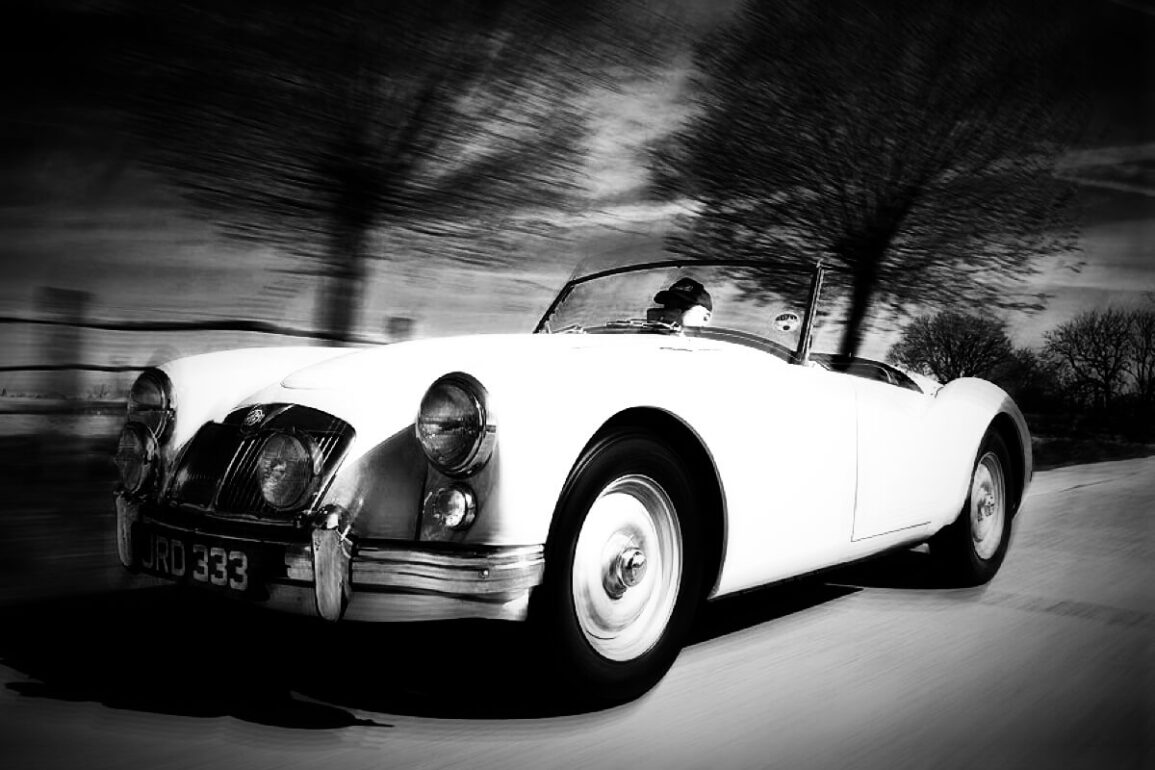 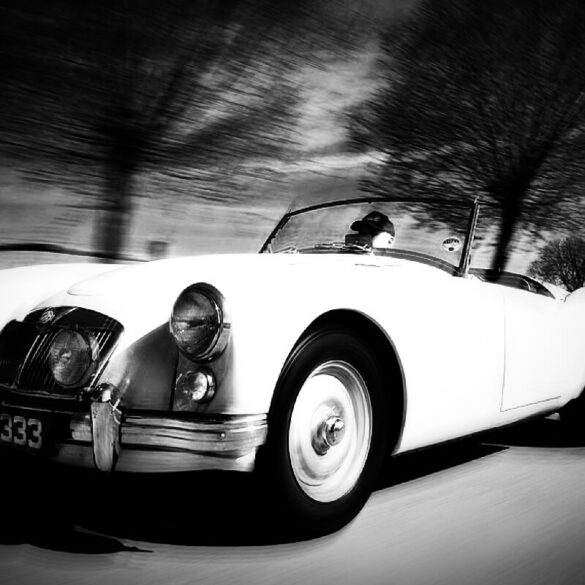 I have to admit to being a car and motoring tragic for all my (thankfully) quite long life.

In fact, my late mother always said that after I had mastered “mum” and “dad” my next words were “red car.”

One of the benefits of this motoring passion is that I’ve been fortunate to own and enjoy some interesting cars.

Those that especially come to mind when I look back on my more than five decades behind the wheel are my first car – an original Mini – an XM Falcon Futura hardtop, an HK GTS V8 Monaro, an Alfasud Ti, Ford Capri 3000 GT, BMW 633 CSI, Porsche 928S and my current toy – a Nissan 350Z roadster.

Gazumping all of those – certainly in terms of exotic rarity – was my 1959 MGA Twin Cam roadster.

At the time of its acquisition, I was a very young journalist on the Launceston Examiner and as well as doing police rounds and courts and some sport, I was extremely fortunate that the Editor, the late F G N “Goodie” Ewence – added motoring to my responsibilities.

Until the arrival at the Examiner of young Crawford, as well as running the paper “Goodie”, in the absence of anyone else who knew anything about cars and motoring, had been doing the motoring section himself.

Mr Ewence was a serious motoring enthusiast and in fact drove to work each day in a somewhat tatty Triumph TR2.

He was also one of the driving forces behind the wonderful Tasman Series races held at the equally wonderful but long-since defunct Longford road circuit.

I had seen a white MGA roadster driving around town on a few occasions and wondered why it had steel disc wheels with knock-offs.

One drive and I knew I had to have it, so the little Mini 850 with the twin carbs and noisy exhaust was traded and the MG was mine.

To find out more about the Twin Cam and its history in Australia, I discovered some years ago the Australian MGA Twin Cam Register that is run by Melbourne enthusiast Bob Somerville.

He says that 75 Twin Cams were sold new in Australia and another five were imported in the period before 1965.

Another 23 were imported in the 1990s and eight were exported.

Bob says that of Australia’s original 80 cars, 18 are lost – sadly, including mine.

He says that while I supplied him with the photo that’s with this story, I no longer had engine and chassis numbers so tracing it all these years later was virtually impossible.

Bob did, however, float the theory that the car might have been bought by a father for a son who subsequently wrecked it.

In all, the register says 1788 Twin Cam roadsters were produced between 1958 and 1960, as well as a much smaller number of coupes.

The car’s engine was based on the Morris B-series motor and was modified to run an aluminium cross-flow head and the twin-cam set-up.

The engine was fitted with 1 3/4-inch SU carbies and a fuel-consumption figure of 10.2L/100km was claimed.

The engine was mated with a four-speed gearbox that came without synchromesh on first.

Other features that set the Twin Cam apart from the “mere-mortal” MGAs were the aforementioned Dunlop steel wheels (like the ones Jaguar ran on D-Types) with knock-off central locking and 11.0-inch un-boosted disc brakes.

The only other way you could pick a Twin Cam was it if had three “Twin Cam” badges — one atop each front guard near the air vents plus another on the boot lid.

Twin Cams have done a lot of racing over the years and in fact a coupe, driven by British drivers Ted Lund and Colin Escott was 12th overall and first in the 2.0-litre class at the 1960 Le Mans 24-hour classic.

In terms of my time with the Twin Cam, after a couple of years of enjoyable (and much too rapid) motoring, the engine ran a big-end bearing and developed the associated unhealthy-sounding rattle from the bottom end.

Before this happened, I had become conditioned by the engine’s propensity to oil up plugs.

To manage this problem, I kept a small sugar-bag containing a plug socket and about 20 spark plugs in the boot.

After the bearing went, a mate of mine at the time, who was much better with a spanner than I, generously offered to help me do a full engine recondition.

Another mate had an empty garage behind his shop and that’s where all the work was undertaken.

The engine was removed and pulled down, the block was sent to the then Repco Bearing Company plant to have the bore honed, the crankshaft ground and new big-end and main bearings were ordered.

Once the block came back with Repco’s bore measurements, pistons were sourced from the UK, flown out and the engine rebuilt.

The alloy rocker covers and the SU “bells” were all polished and the engine looked a million dollars.

For something like 1500km I carefully ran the engine in before changing the oil and giving the car a serious high-speed run down the beautiful road on the western side of the Tamar River.

It was in fact the day this photograph was taken and I was travelling with a newspaper photographer colleague to cover a story.

On the way back there was a nasty noise from the engine, a lot of smoke and a serious loss of power.

After limping back to Launceston, I gave my mechanic mate the bad news and remarkably, he again helped me rebuild the engine.

What we found was that Repco had given us an incorrect reading of the bore size and we had fitted under-sized pistons.

Not only that, they had not cleaned out the oil ducts in the crank shaft and our beautiful new bearings were badly scored.

Needless to say they blamed us for not checking everything.

They were probably right but my mate and I were not happy. In my case, heartbroken would not be over-stating it.

Another month or so with he and my then girlfriend (now wife) working into the early hours of the morning and the engine was again like new.

A week or so after we had the car back on the road, Tasmania’s first Falcon XM hardtop – a top-spec pale metallic-blue Futura – arrived in the local Ford dealer’s showroom.

Back then – and still today for that matter – it was a seriously sexy car and I decided that it had to be mine.

I just couldn’t face the prospect of another engine rebuild – and I was heartily sick of forever changing plugs.

The upshot was that I traded the Twin Cam on the Futura and received the princely sum of 1000 quid for the car.

Needless to say I shuddered when, in February 2017, Shannons sold a Twin Cam Roadster just like mine for $85,000 (except it had red leather where mine had black).

So that’s the story of my Twin Cam. It was to a degree a love/hate relationship, but I still remember the good times and the great drives.

But there’s a remarkable sequel to the story and it’s one of the spookiest experiences of my life.

About 10 years ago during my time as motoring editor of the Canberra Times I was in Hobart on a Mini media launch.

We travelled about 20 minutes by bus from our city hotel to a winery restaurant for dinner.

Unbeknown to us, the PR people had arranged for around 20 members of the Hobart Mini club to chauffeur us, one to a car, back to the hotel after dinner.

We were told to choose a car and head off with its driver.

It was a delightful touch.

Jumping into a Cooper S fitted with a huge Weber carby, I introduced myself to the driver – a great bloke a few years younger than me.

He asked me who I wrote for and I explained it was the Canberra Times, although I did it out of Melbourne.

I explained that actually, I had started writing about cars some 40 years earlier when I was a kid on the Examiner.

He immediately and with some excitement said: “ You used to have an exotic sports car – a white MGA Twin Cam with black leather.”

Of the 20 Minis I had to choose from, I chose this one with this bloke at the wheel.

He explained that he used to see the car parked outside the newspaper office and how he often used to hear it go past his school, and how much he loved its exhaust note.

To finish off the story, my new Mini-driving mate told me he had actually driven in the car.

This came about because one of the Ford dealer’s salesmen lived in the same street and he had brought the car home one day and took the then schoolboy for a ride.

As they say, it’s a small world.

Looking back, there’s no doubt the Twin Cam – even in the often cold Tasmanian weather – instilled in me a love of top-down motoring.

This was confirmed three years ago when I bought a Mazda MX-5 roadster I found for sale outside a nearby house.

My wife and I loved going for top-down drives in the little Mazda but it was just a tad small for me.

We now have a Nissan 350Z roadster and wind-in-the hair motoring (not that I have much these days) is still very much a part of our lives.

And it all started with the Twin Cam.

CHECKOUT: 1974 and my Chinese takeaway