The 508 Fastback is the best indication yet that Peugeot has its ‘mojo’ back.

For a while there — I’m thinking some of the 407s from the early 2000s — the look was visually challenging to say the least.

The first 508, launched in 2010, showed promise, but the rather small petrol engine was something of a disappointment in performance terms.

The current model, which arrived in 2018, takes its cues from the Instinct shooting brake concept, shown at the 2017 Geneva Motor Show.

Not only is it a certified head-turner, with edgy, dramatic styling, it’s no slouch either — even though it still has a small 1.6 under the bonnet.

The big difference, is that this one pumps out 165kW! 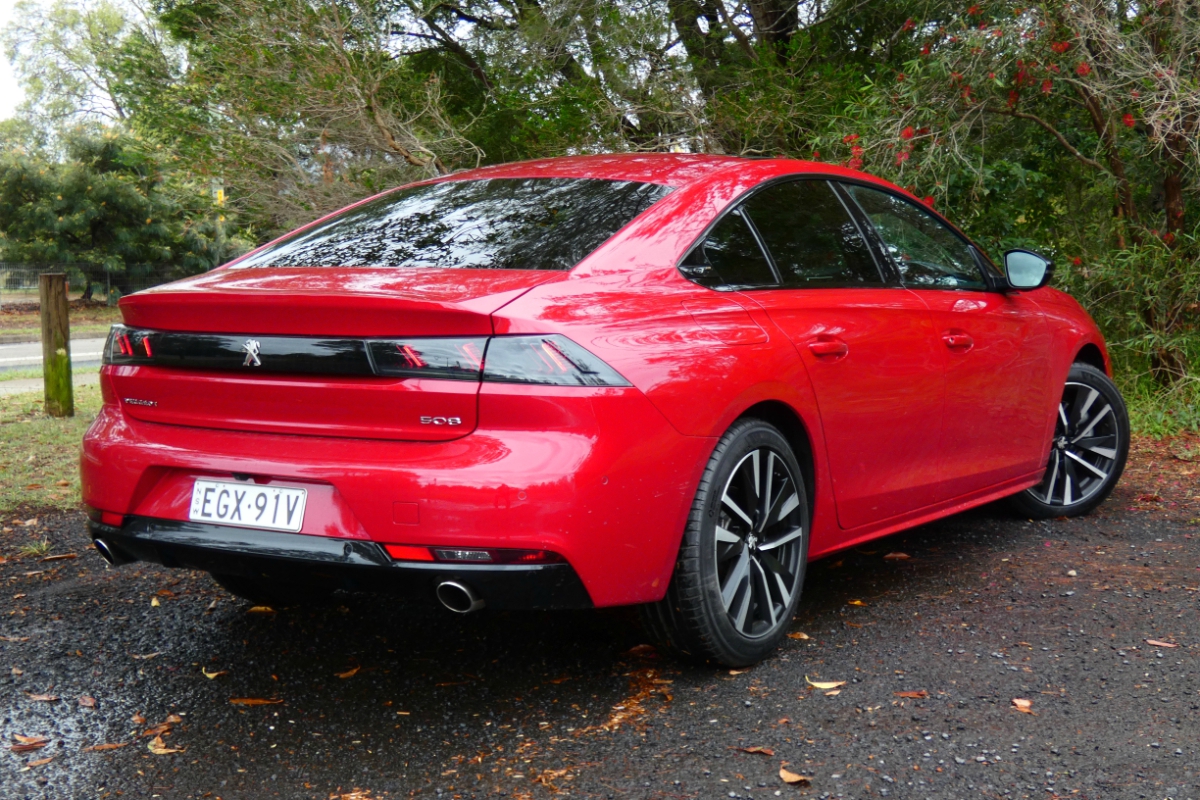 BUT (isn’t there always a but), for around the same figure you could get into a Kia Stinger GT-Line, and there’s nothing shabby about the Stinger — inside or out.

Standard equipment includes but is not limited to leather, two-zone climate air, power adjust driver and front passenger seats, with heat and massage functions (but not cooling). 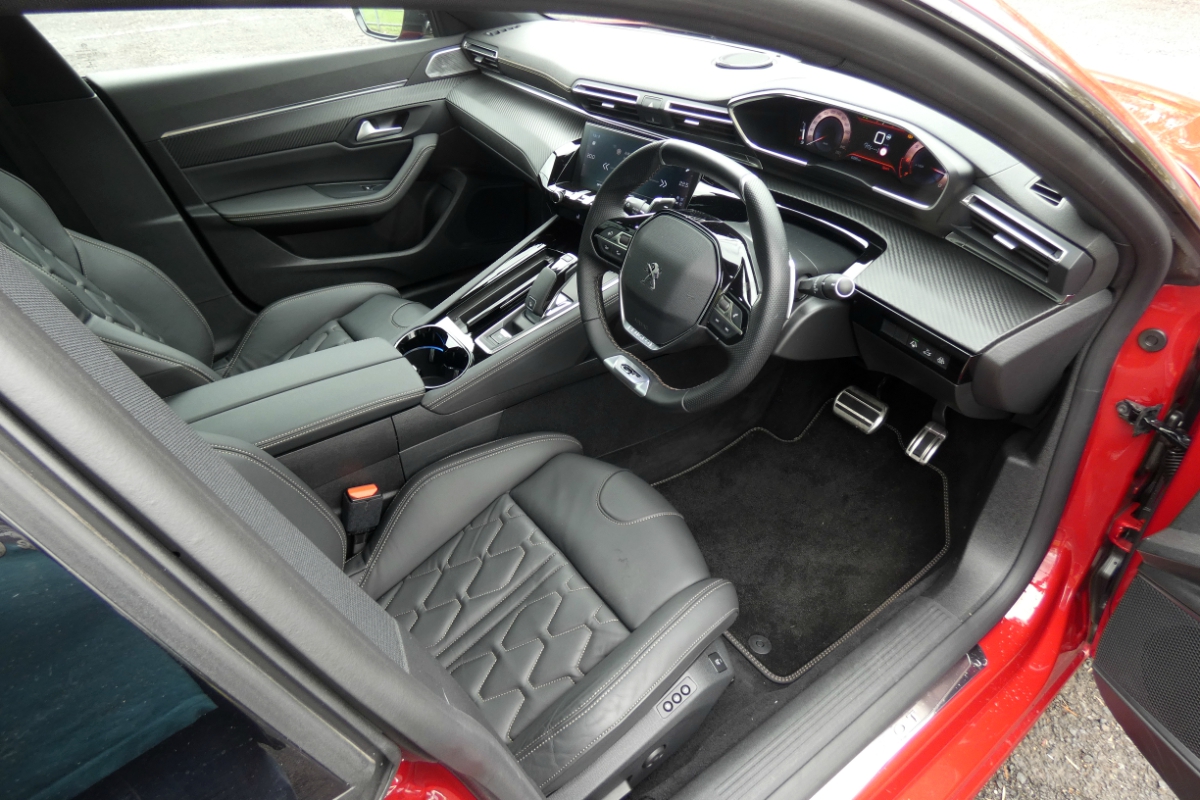 Finished in plush quilted Nappa leather, the interior looks like a million bucks.

But with the driver’s seat set to our preferred position, rear legroom is not exactly generous, considering it’s supposed to be a GT.

The steeply raked rear roofline can also make getting in and out challenging, and will not suit taller passengers.

Inside it’s a bling, bling, bling, with quilted and stitched upholstery, striped carbon-fibre look insets and soft touch black trim that squishes under your finger.

Unfortunately, while it’s squishy, it also looks like the generic stuff found in a thousand cars and that’s not good.

The fully digitised iCockpit instrument panel, mounted high on the dash, can be configured in a variety of ways with presets to display different looks.

They range from minimal with just digital speed, to analogue with twin dials, to 3D navigation, to fully personalised — with speed limit sign recognition built in.

It’s super quiet too, thanks to an acoustic windscreen and there’s no quibbles with the size of the boot.

Powered by an all-new, high-output version of Peugeot’s proven 1.6-litre turbocharged petrol four-cylinder engine, it delivers 165kW of power and 300Nm of torque, the latter from 1900 revs.

It’s not a huge amount of torque, but by the same token it’s not diminutive either — and at 1385kg it’s not a heavy vehicle.

The more torque available and the lower it is produced in the rev range, the better a car will go.

This is where V8s excel.

The four with more is paired with the all-new Aisin 8-speed traditional style auto that is equipped with change paddles and auto engine stop-start to save fuel.

Fuel consumption from the 62-litre tank is a claimed 6.3L/100km and it takes premium 95 unleaded.

As something of a yardstick, the Fastback does the dash from 0 to 100km/h in a brisk 8.1 seconds.

The heavier wagon version is about a tenth slower.

In the real world, bury your right foot and the thing takes off after a slight hesitation, with plenty of oomph for short overtakes.

But, to keep the turbo on-song, the driver needs to engage sport mode which keeps engine spinning above 3000 rpm and the turbo ready to go.

Left in sport mode, however, the engine will almost certainly consume more fuel over a longer period of time — your call.

Having said that, we didn’t really think about sport mode or changing gears manually with the paddles until it came time to test them.

Default ‘D’ was doing just fine all by itself, with quick, decisive gear changes that arrive just as you want them.

The one caveat is that sport mode firms up the suspension. It’s not too brittle, but enough to make a perceptible difference — like dunking a Ginger Nut.

I take issue with the steering wheel, however. I like a high-set wheel, but raising the wheel, even though it’s a small bugger, tends to obscure the gorgeous instrument panel.

This is a design issue. The instrument panel is mounted high on the dash to do away with the need for an electronic heads-up display.

But mounting it high, obviously pushes the wheel lower. The size of the wheel has been reduced to compensate — but still the problem exists.

Finally, the object of down-sizing and turbocharging the engine is to produce better fuel consumption and therefore reduce engine emissions. 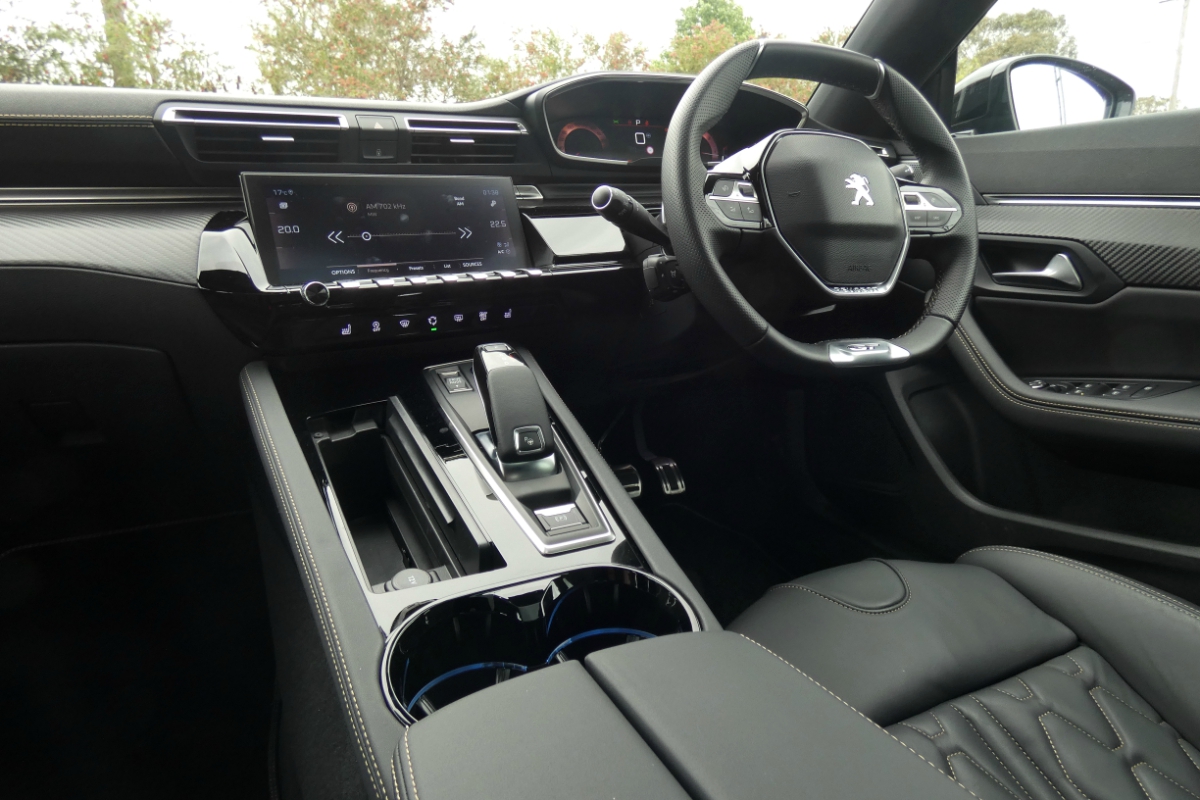 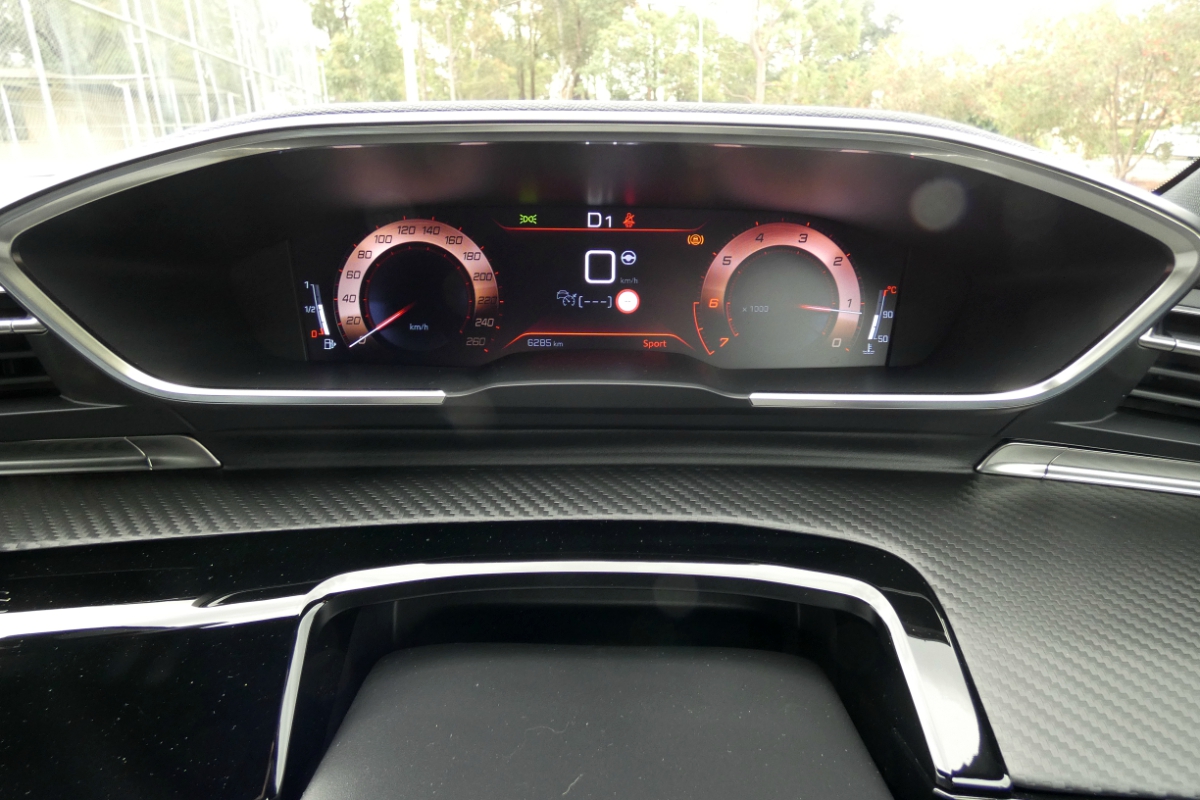 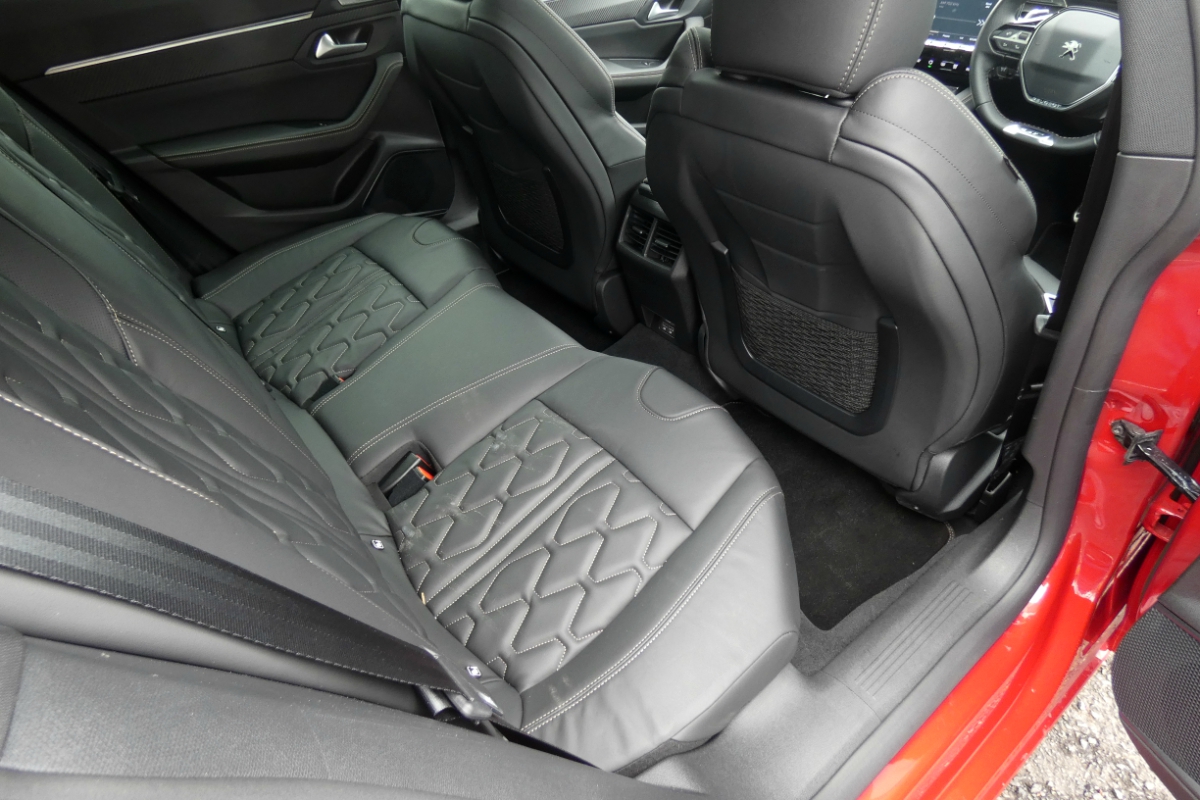 I was so looking forward to finally driving the 508 Fastback and though it did not disappoint, it’s not a game changer.

What it is, to be blunt, is a desirable, affordable alternative to a Benz or BMW for fashion conscious North Shore folk.

It’s fully loaded, with killer good looks and a reassuring 5-year warranty — unlike (cough) their competitors across the Rhine.

Mention the words Kia or Korean to these folk and you can see their begin to glaze over, while the conversation quickly turns to something else — they’re sooo conservative. 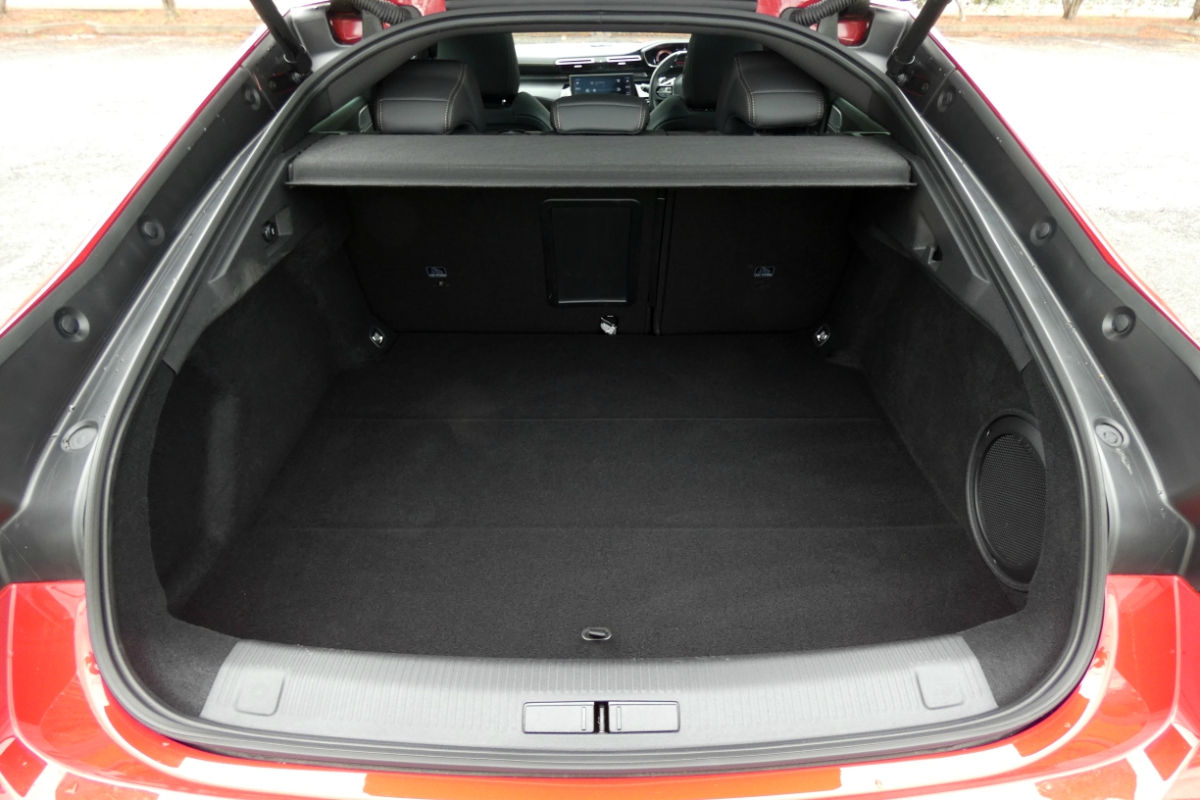