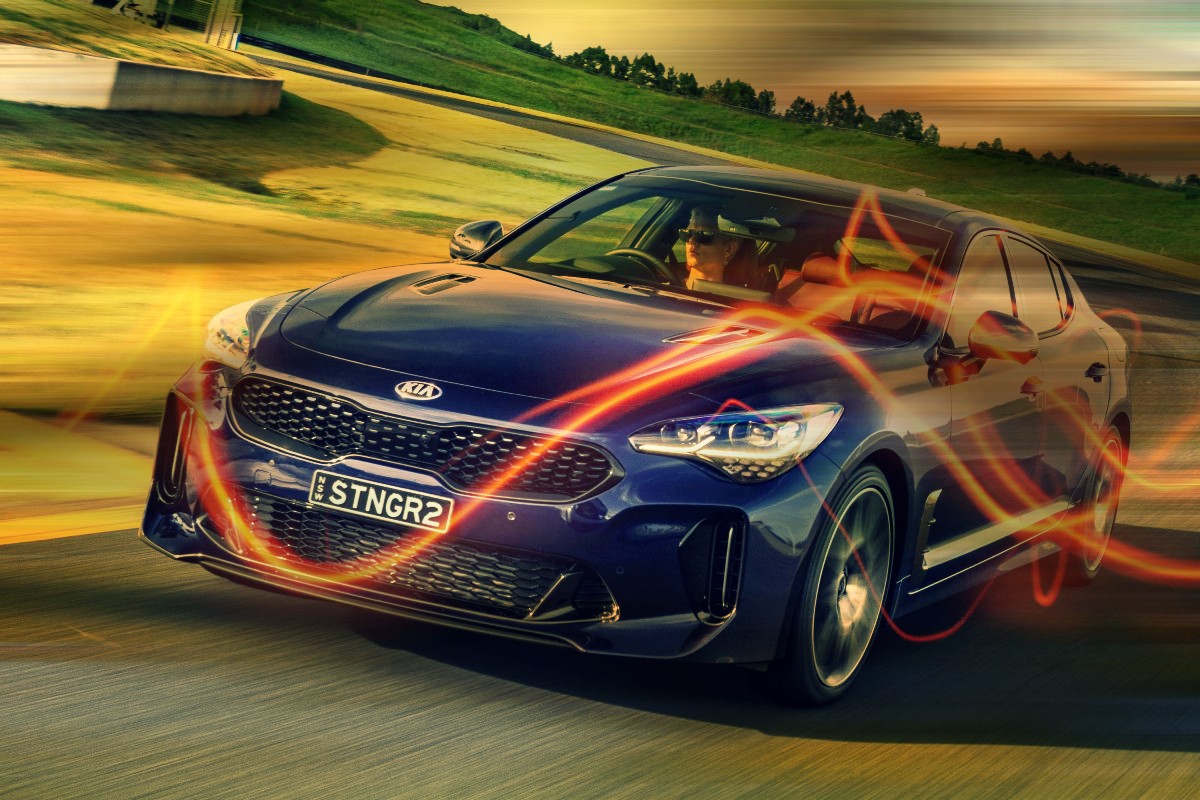 Kia Stinger: Nothing to spend 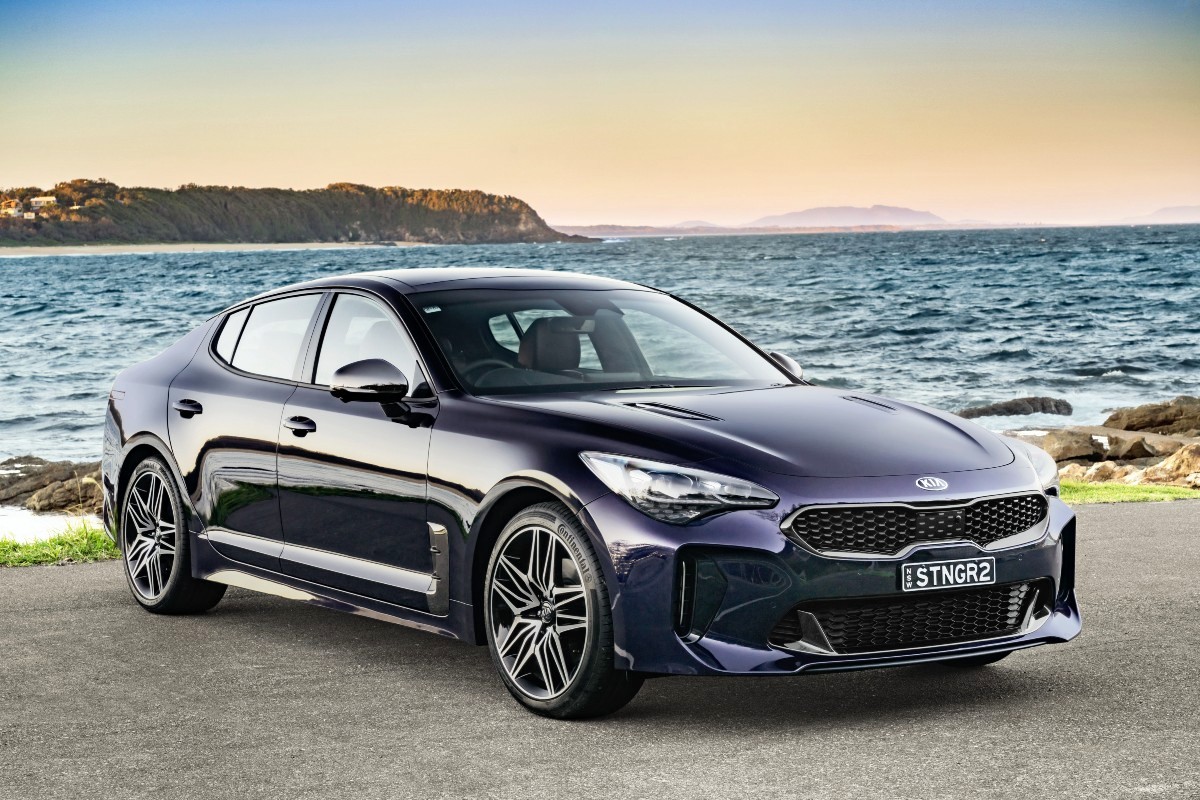 A large rear-wheel drive sedan with a smallish engine, lots of luxury — and lots of pep.
It’s a strange mix, but it works well in Kia’s Stinger 2.0 GT-Line.

It’s a smart-looking, low-slung with a lot of performance credentials, among them Continental tyres on its 10-spoke 19-inch alloys, big ventilated brakes, some serious cross-bracing under the bonnet, and a mighty 182kW on tap from its turbo four.

Even the turn indicators have been styled to resemble a chequered flag.

But it also comes with more safety and luxury bits than most of the softer lux models, and its extra touches are so manifold that I couldn’t find some of them, even after having it for a week. 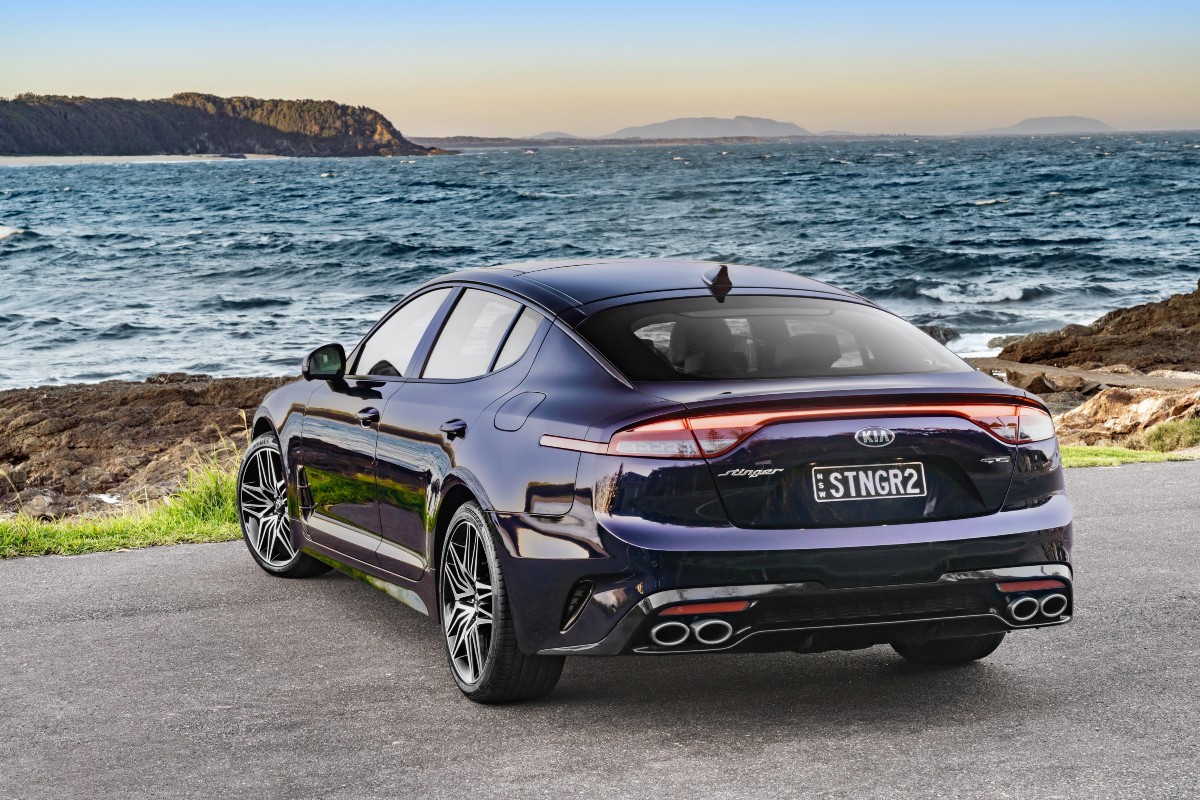 You need to take a good look at the Stingers – because there’s a trio of them.

The latter is what we’re looking at today.

But it’s so much more than a Camry, you say?

Well, it’s for people who want something other than porridge every day.

For starters, you can dial in any of five different drive modes: smart, eco, sport, comfort and custom, there’s a glass sunroof and the auto tailgate opening can be set to any of four heights.

Other pleasantries include a 15-speaker audio system, dual-zone climate control, a reversing camera, plus a 360-degree camera and front and rear parking sensors.

Dominating the interior, if you can get your eyes off the classy red (or black) Nappa leather trim, is a new 10.25-inch touchscreen with inbuilt navigation and smartphone connectivity.

The dash-mounted screen lets you control and monitor lots of vehicle functions simultaneously.

Of course it has DAB and Apple CarPlay and Android Auto.

As well, there’s Bluetooth Multi-Connection, allowing multiple smart phones to be paired at the same time.

And the ambient lighting is controlled by a Mood Lamp which has has a range of 64 colours — that gave me a bit of a headache.

I was dying to go on a slow cruise past the nightspots, wearing a ghoulish shade of green, but I couldn’t find the magic lamp.

I scrolled through several menus, went online to learn that ‘different Kias may have different controls for the Mood Lamp’ and paged through the vast owner’s manual.

No Mood Lamp in the index, nor did it feature on the dash keyboard. I tried ‘ambient lighting’ with the same result.

It had to be there somewhere, but I eventually gave up and had to be content with a soothing purplish hue.

Seating is excellent, fore and aft, and tall people can sit comfortable with adequate headroom, despite the handsome car’s sleek coupe-like lines.

The 406-litre boot is long, wide and flat, and the back seats can be tumbled to triple cargo space.

The car is actually a very comfortable four seater, since the transmission shaft, a rarity these days, makes the centre rear seat a bit problematic for people of normal stature.

The rear seats do have their own air vents, as well as cupholders and bottle holders in the doors. 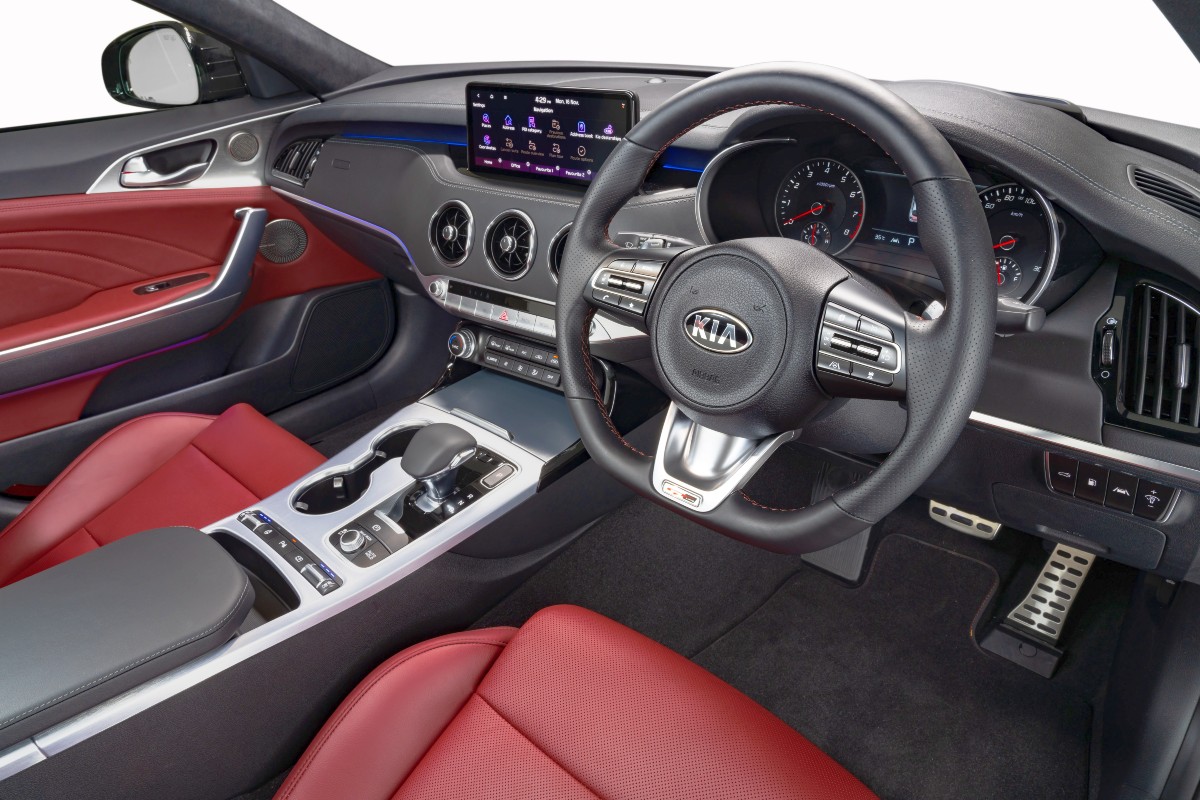 Under the GT-Line’s bonnet is Kia’s Theta II 2.0-litre four-pot turbo, which sends its 182kW and 353Nm to the back wheels via a smooth eight-speed automatic.

Suspension is by Macstruts in front and a five-link system at the back, specially developed for Australian roads.

Matched to the sharp electric steering and powerful brakes, it adds up to a well-balanced car with impressive dynamics.

We came within cooee of that at 9.0L/100km after a week of driving, which made the whole package even more appealing.

Safety and driver assist features abound and apart from seven airbags and the rest of the safety ABC, includes pedestrian and cyclist detection, high and low-speed forward collision warning and front and rear cross traffic alert.

Cruise along a freeway and the steering wheel gently tugs at your hand to keep you between the white lines, emitting audio beeps if you’re too close to one side or t’other.

At night, the excellent headlights ‘bend’ to light as you go around the corners.

It’s a fairly big car, measuring 4830mm nose-to-tail and has a turning circle of 11.2m, so while it’s not great for shoehorning into the shopping centre’s tight parking slots, it still fits into a standard garage or city parking meter space.

As well, Aurora Black Pearl, is available for an extra $695. 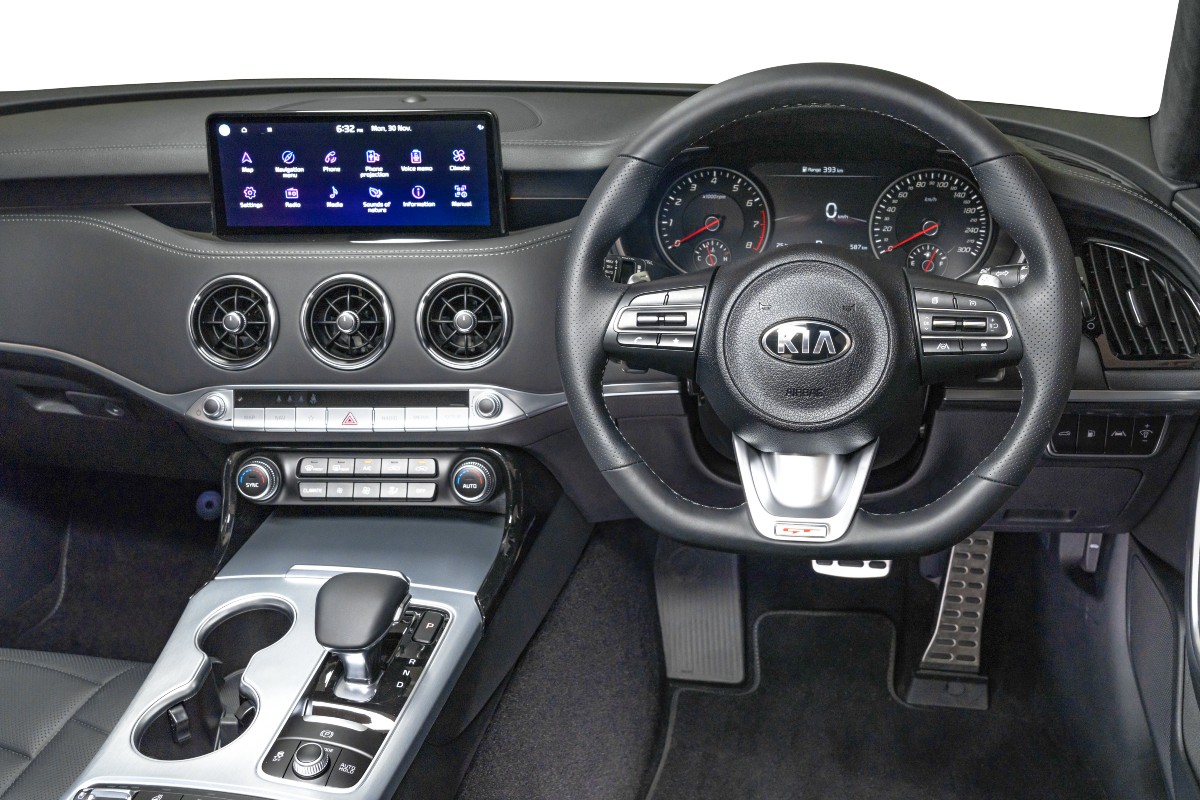 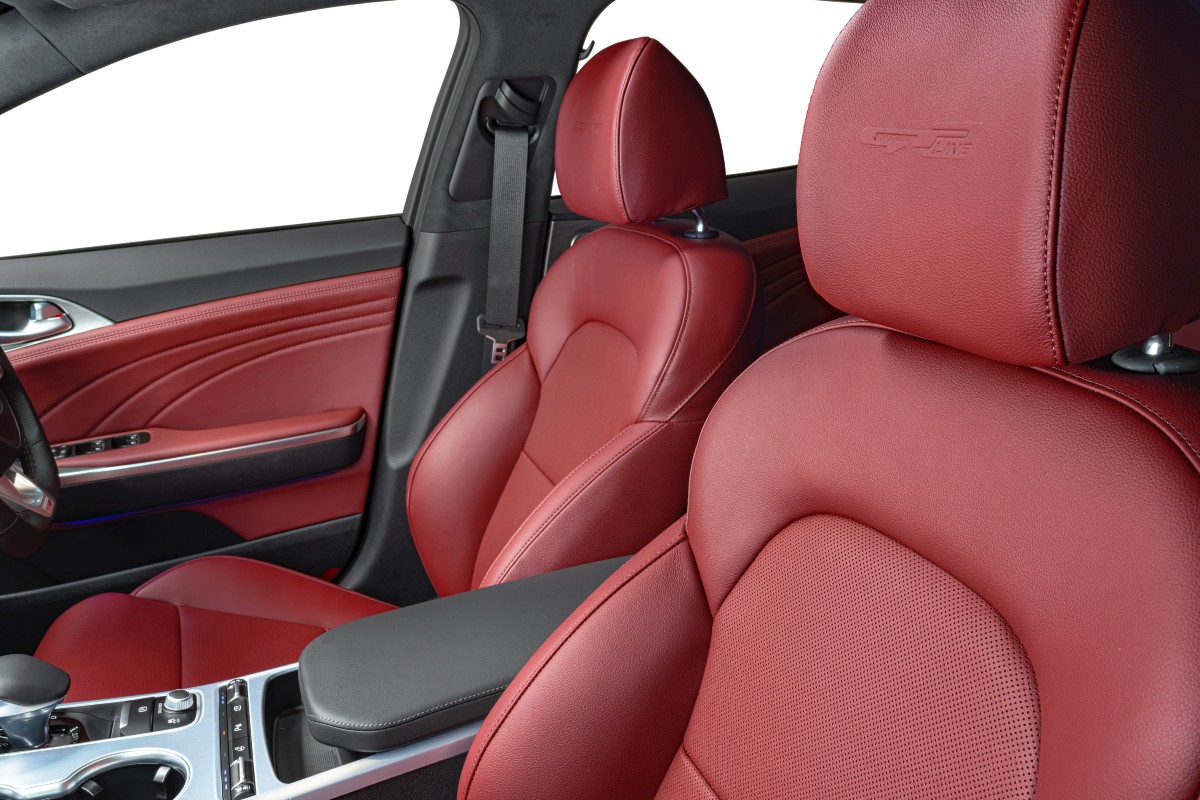 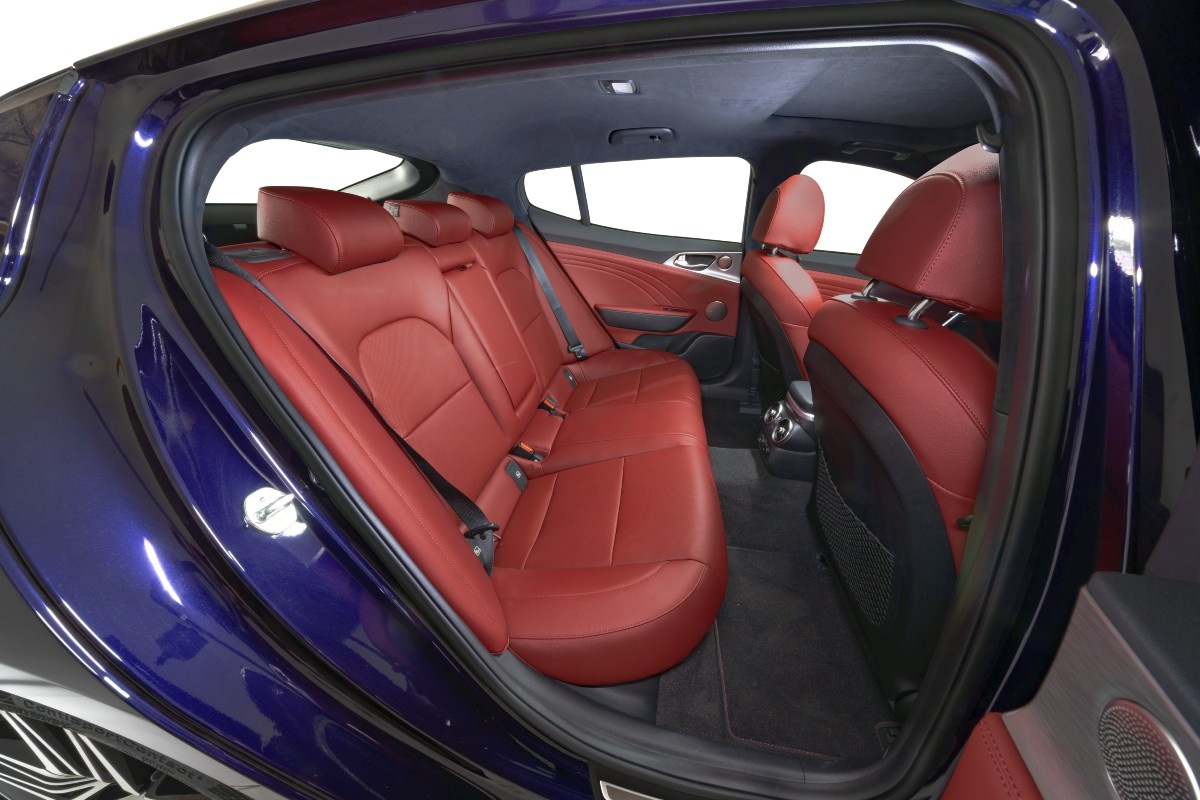 I’d give the Stinger GT-Line a five-star rating. Looks great, drives and handles like a Euro thoroughbred; a complete, quality  car, with nothing else to spend. 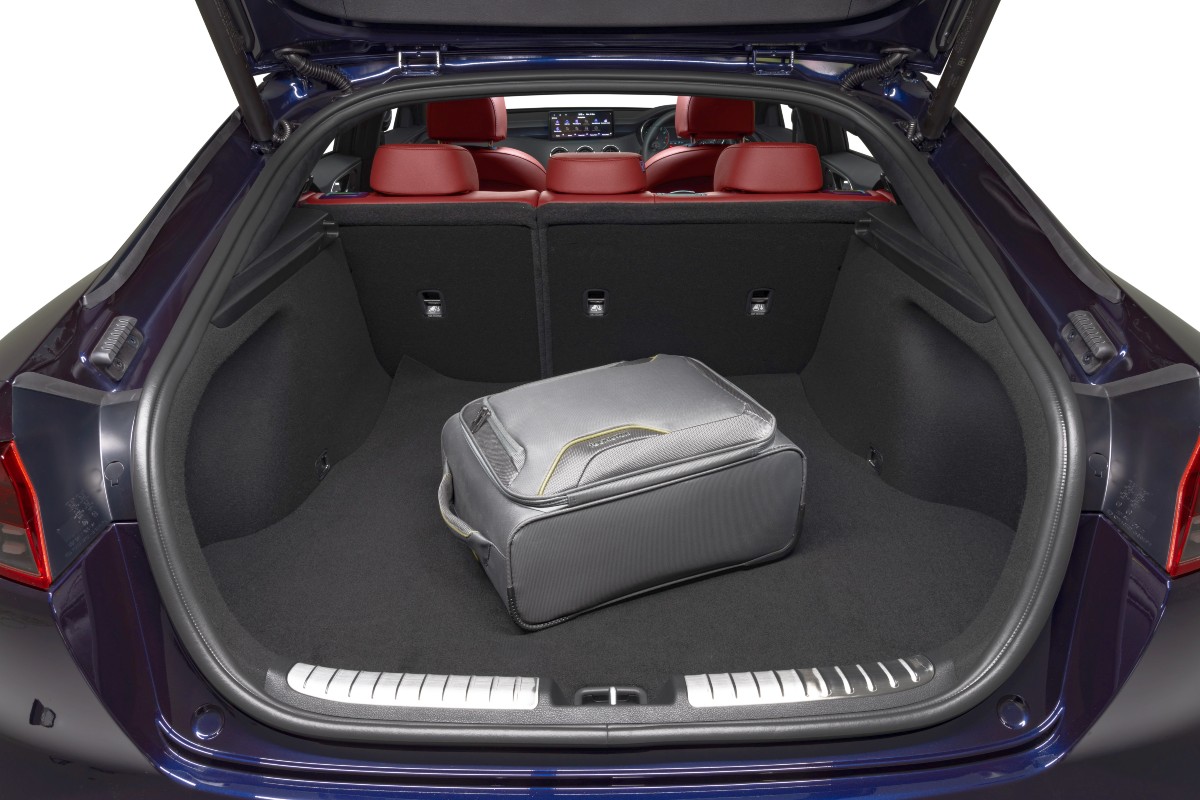