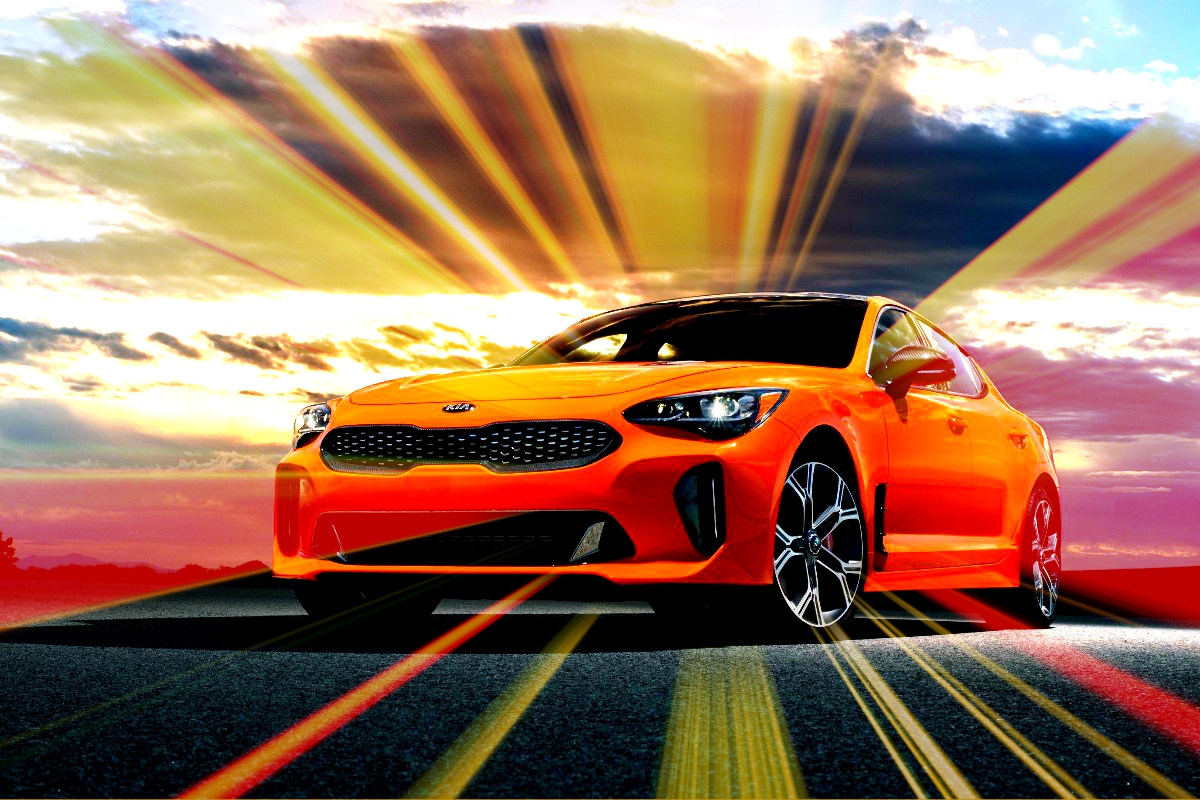 Kia Stinger: It’s the GT for me

Home
Test drive
Kia Stinger: It’s the GT for me 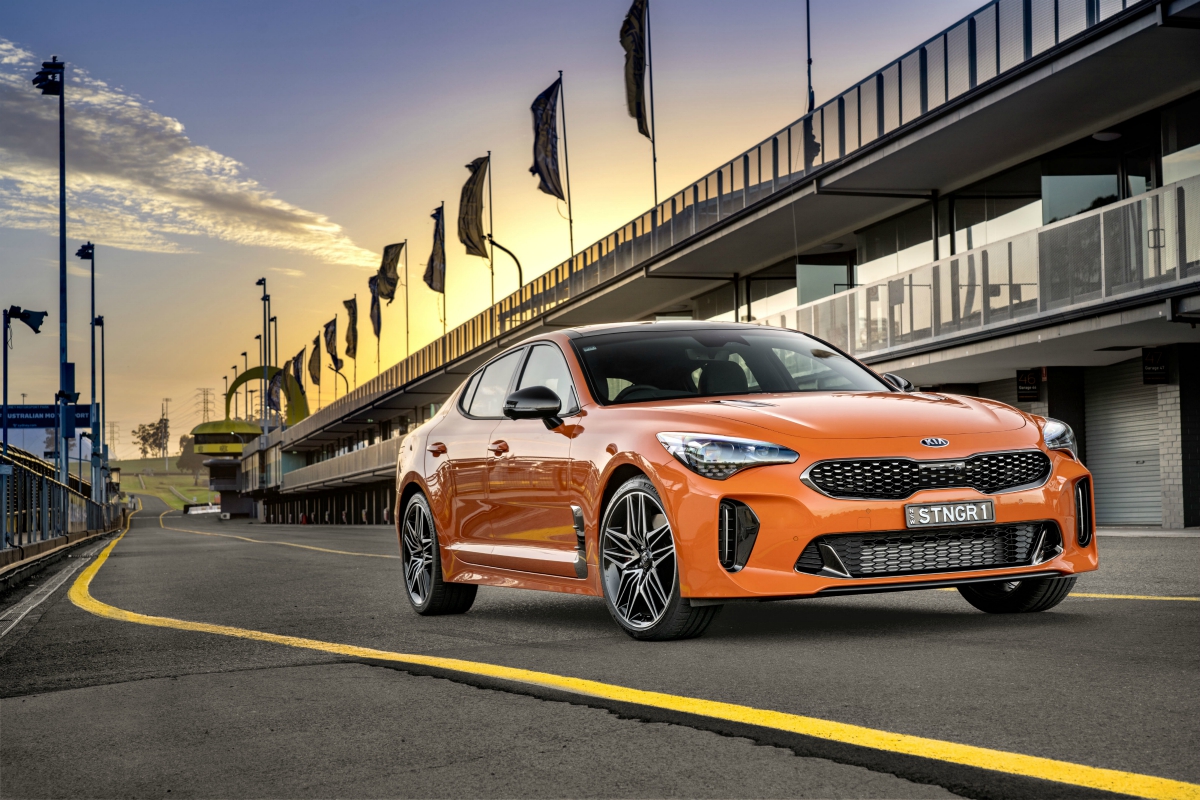 Kia’s Stinger GT is a sophisticated sedan that takes many pages from the books of its Euro rivals.

It puts the product out there at a hard-to-ignore price. 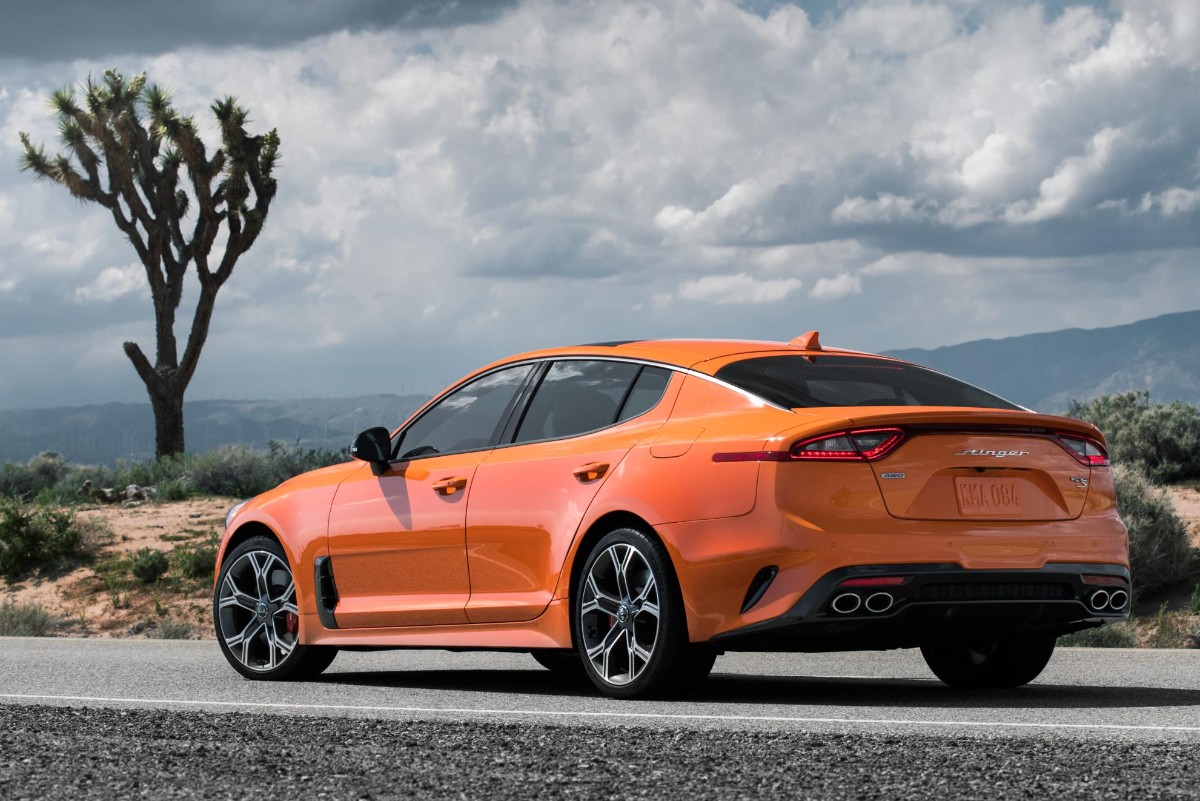 The Black Nappa, Night Sky and Carbon names got me confused, because our test car was finished in neon orange, which still looked orange in the night sky — and I had so much fun driving it I forgot to see if it had Black Nappa trim or some Carbon touches.

All of the Stingers come with an 8-speed automatic transmission and the GT we had featured five drive modes, all of them sensible sounding.

There’s Comfort (soft damper settings smooth gear changes and acceleration). Eco (green lights lower emissions and more trees), Custom (adjust anything you see fit on the onboard computer display), Sport (tightens damping, holds motor in ready for action revs and squeezes your last meal to the forefront of your next intention).

The rear-wheel drive sedan really is a GT and comes with a 272kW/510Nm twin-turbo V6, Brembo brakes, decent suspension and steering — all presented in a striking and surprisingly spacious body.

It’s a full-sized four-door sedan with a vast liftback hatch, more than up to the task of swallowing loads of luggage. 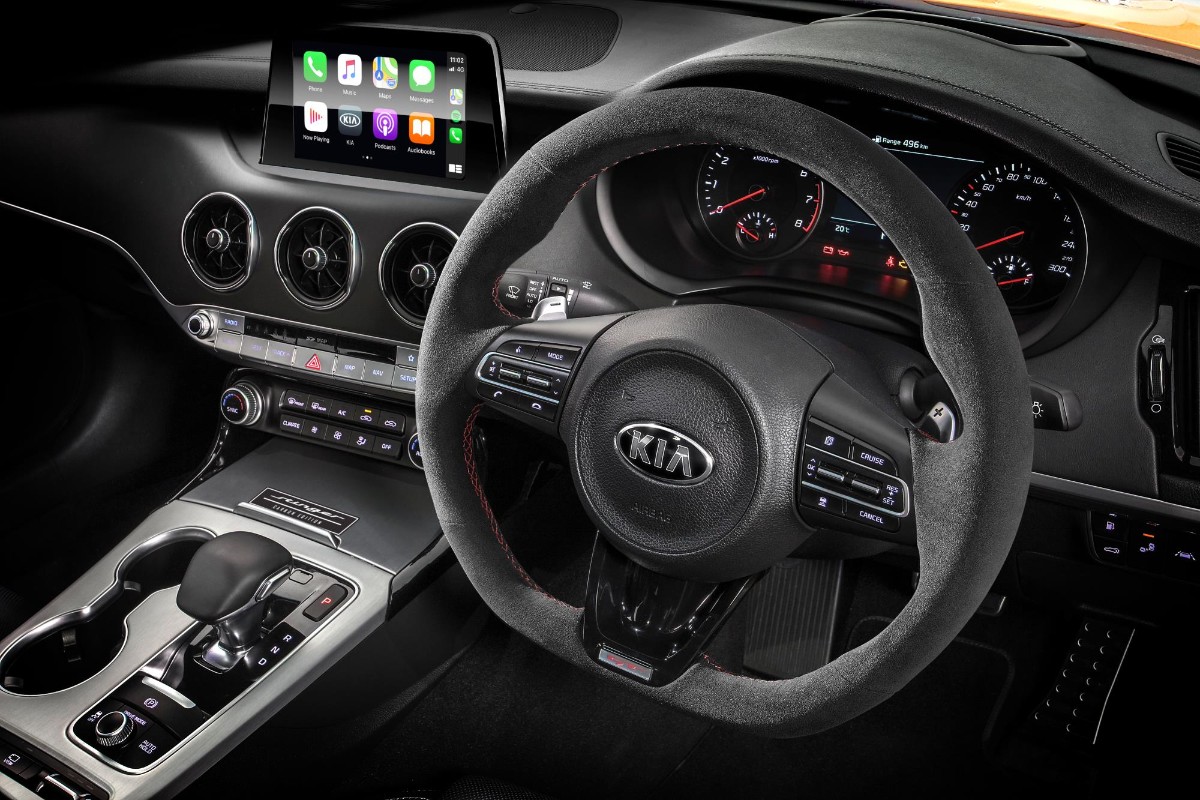 On the road the Stinger has a lot of presence.

It looks mildly angry but not about to bite and we had the amusing experience of being challenged at the lights by an uncivilised Italian supercar.

The half a million buck Italian wore a light blue tracksuit, swore loudly during the entire event and even spat flames at the Stinger before disappearing into a McDonald’s drive-through, probably for a McCafe espresso.

We just let the Vettel-wannabe go. No sense in attracting blue lights or having your picture taken on a public road.

Instead, we sent our Flying Fanta through the turns of our usual test roads, where it sat very nicely, its Michelin Pilots on 19-inch alloys doing a great job under lateral and acceleration loads.

More road feedback could make it even better, but it’s a Grand Tourer and at that it’s superb.

If you’re serious about performance, well, it has launch control as well, not to mention a limited slip diff.

No wonder the WA Police now have some of these cars to replace the Commodores heading for the Dinosaur Park.

The interior fitment is up to Euro standard too with an 8.0-inch touch screen, Harman Kardon speakers and CarPlay all easily managed.

The seating is excellent and there’s ample space front and rear, while the cargo area’s 406 litres can be expanded to 1114 litres by folding the back seats down. That’s huge.

The steering wheel has nice weight and thickness but can possibly obscure part of the instrument cluster, but it’s okay: there’s also a head-up display.

All in all, the Stinger may leave it’s big power claims trailing in the wake of its smoothly delivered class.

Stepping into the car left an impression of attention to detail in every department.

A well designed and thought out Grand Tourer that stands out in a marketplace now dominated by SUVs.

Official fuel economy figures are an average 10.2L/100km, which are easily beaten in open road cruising, but spot-on in city traffic.

For the rest, it has all the bits expected of a modern car, cameras, parking sensors, heated and cooled seats, an electric tailgate as well as dozens of electronic aids to keep you awake (yes!) and safe.

Better headlights than expected too. Excellent reach and spread.

As for taking pages from its Euro rivals, check the specs and prices and you’ll find there are only two German brands that match the Stinger GT in performance and specs. 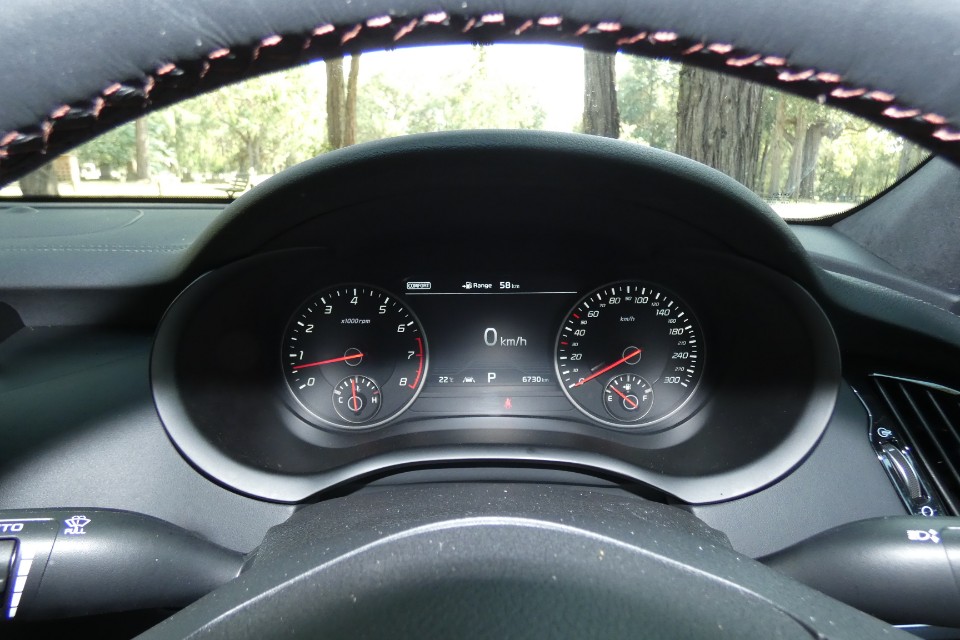 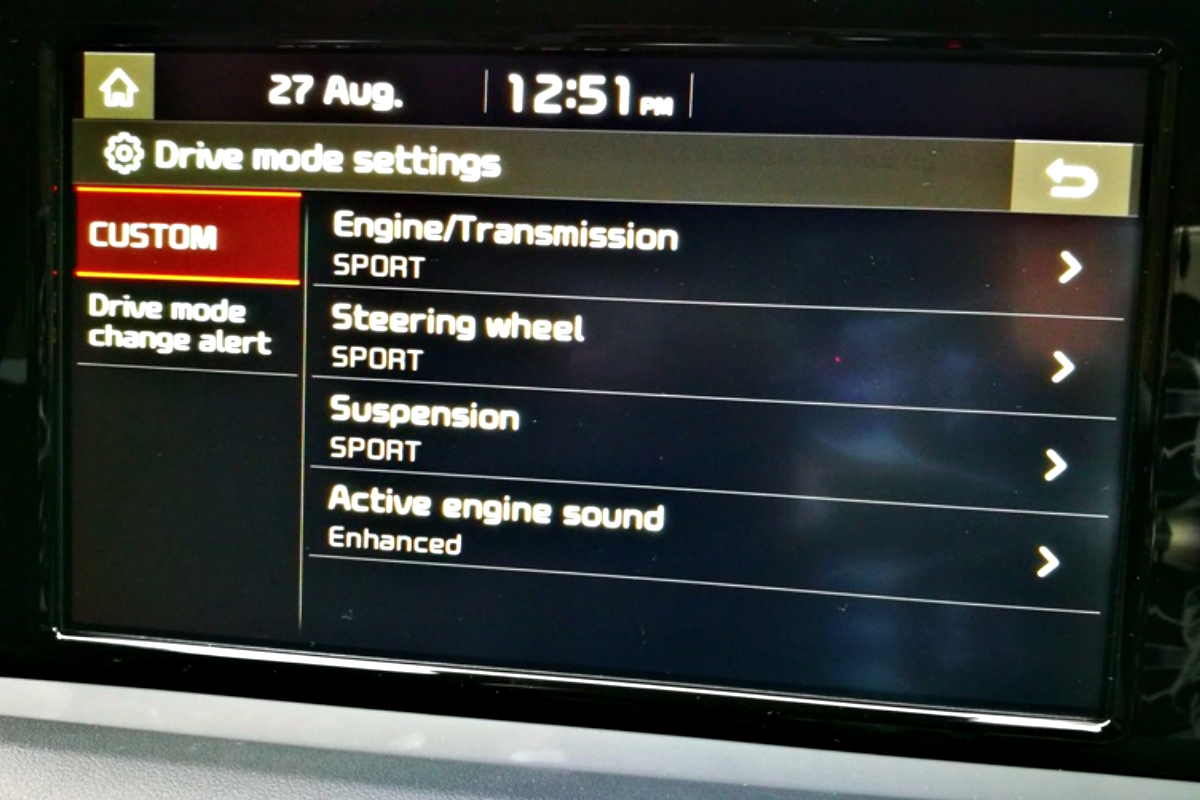 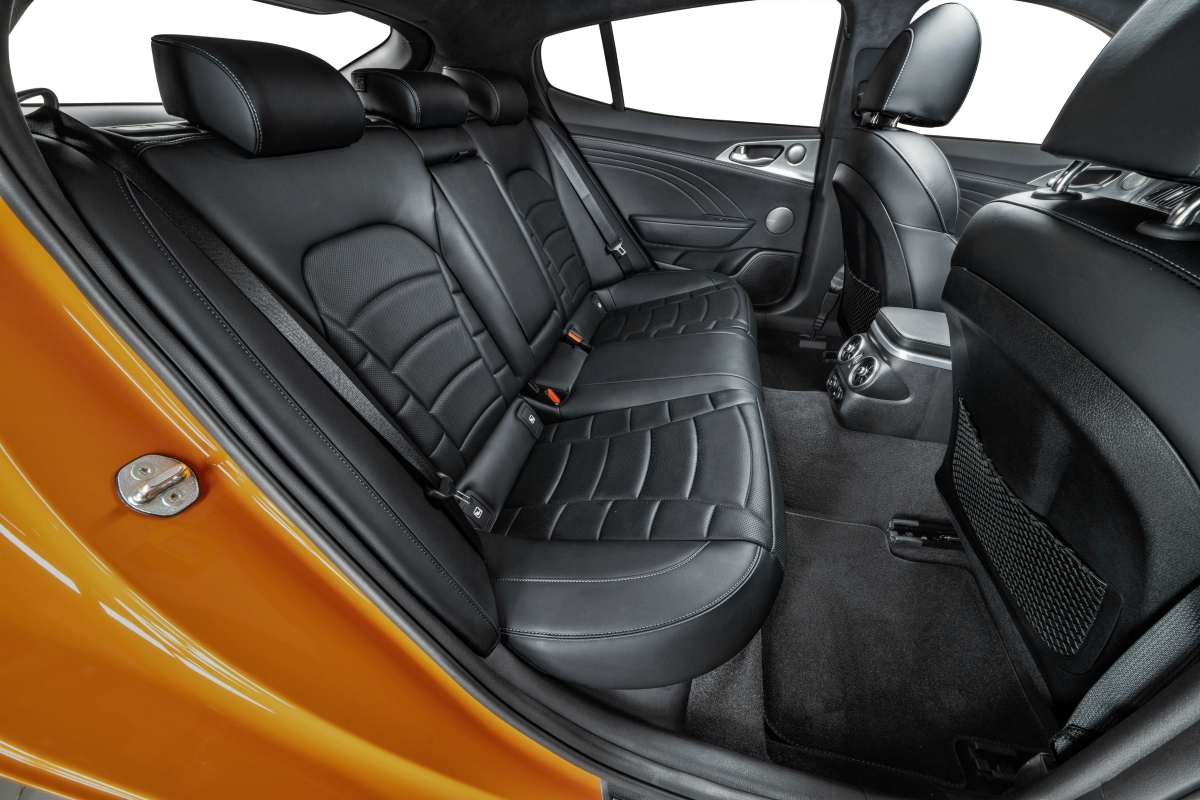 Best buy in its class. 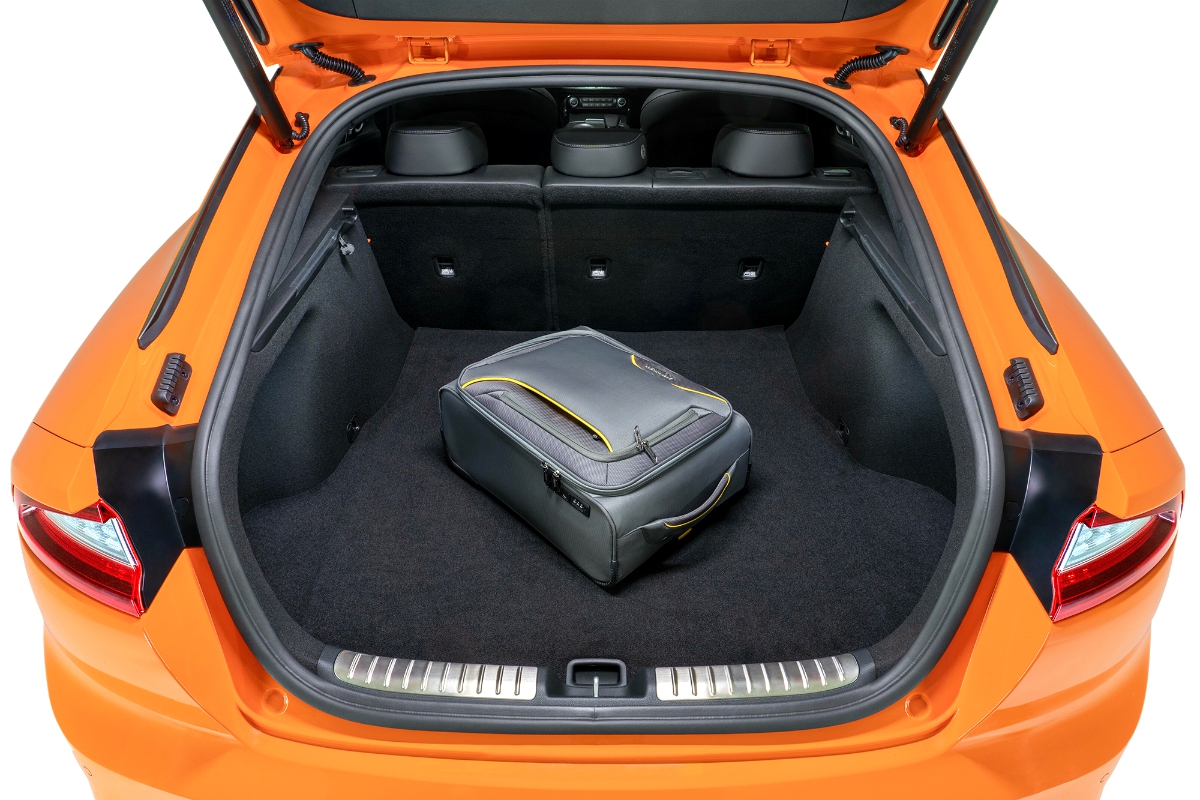