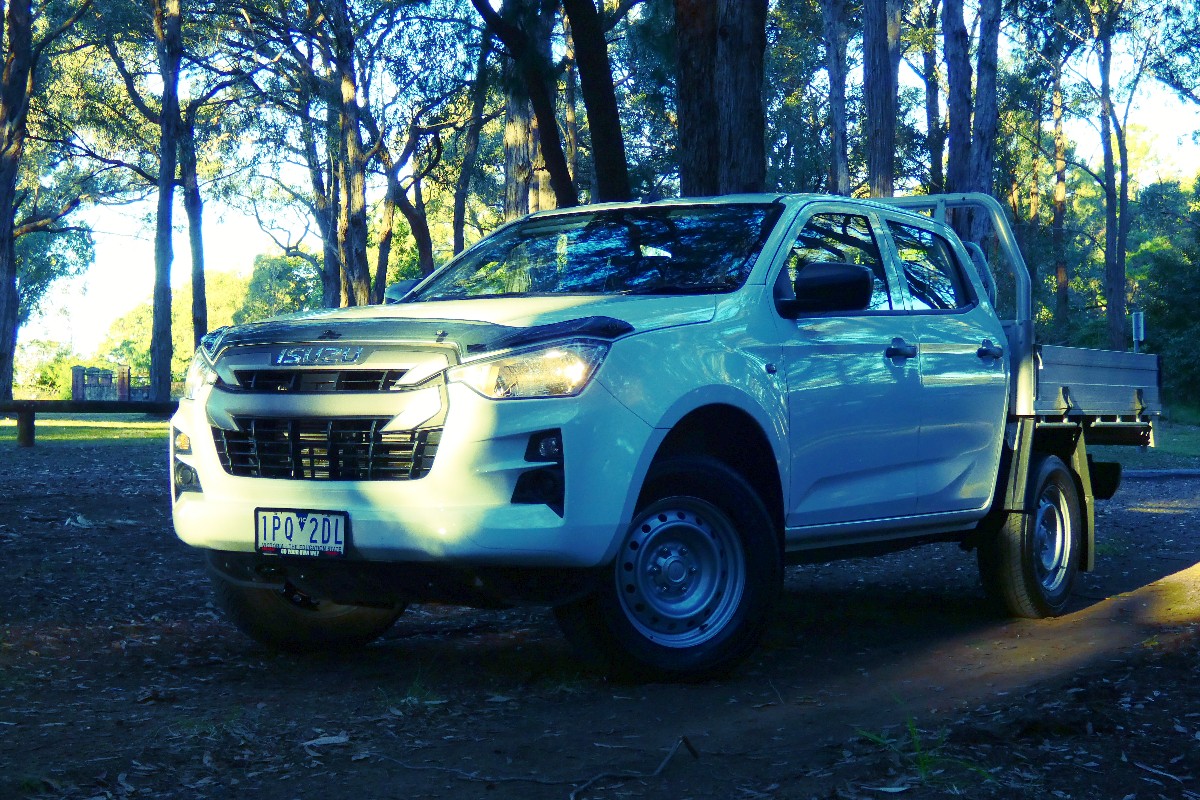 Isuzu D-Max: The long and the short of it

Home
Test drive
Isuzu D-Max: The long and the short of it 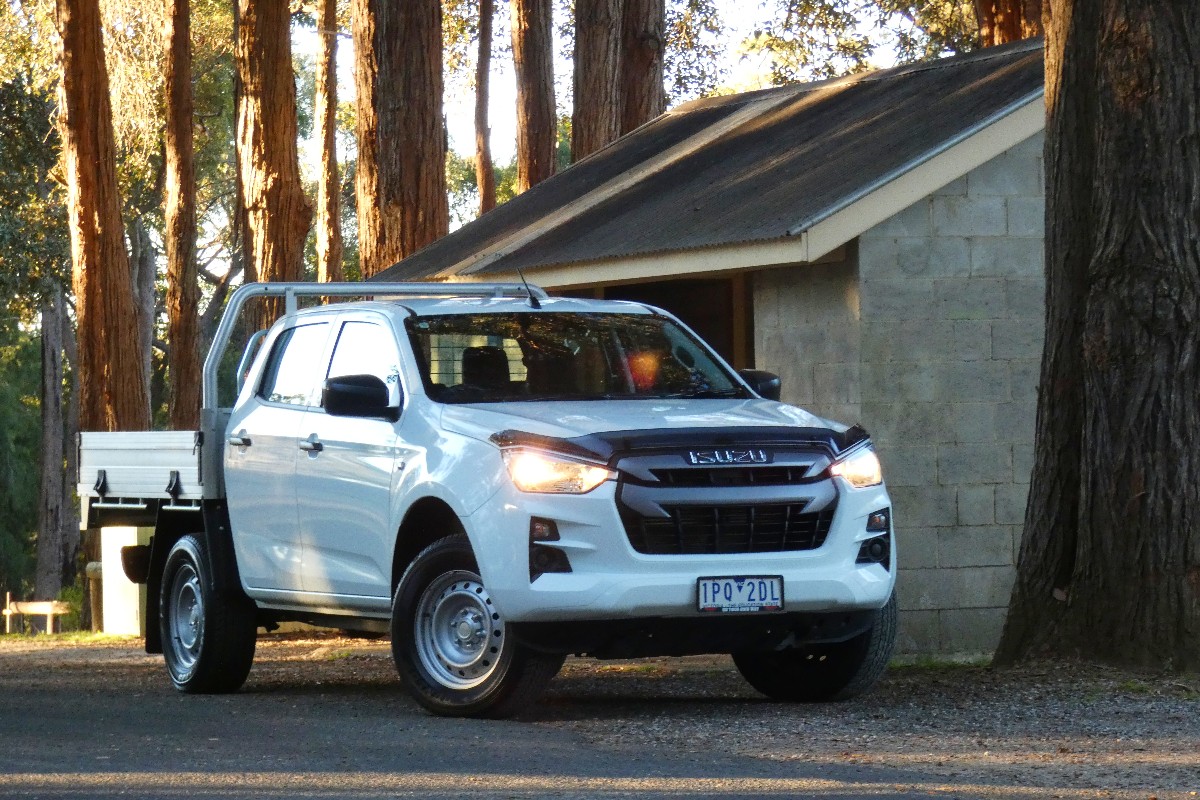 So . . . you’re looking at getting into a ute and are tossing up between single cab chassis and crew cab, maybe even a space cab?

Of course one seats two and the other five with the help of a back seat, but there are other differences, including the size of the tray.

The Isuzu D-Max has come on in leaps and bounds in recent months and today we’re going to take a closer look at the SX 4×4 crew cab chassis. 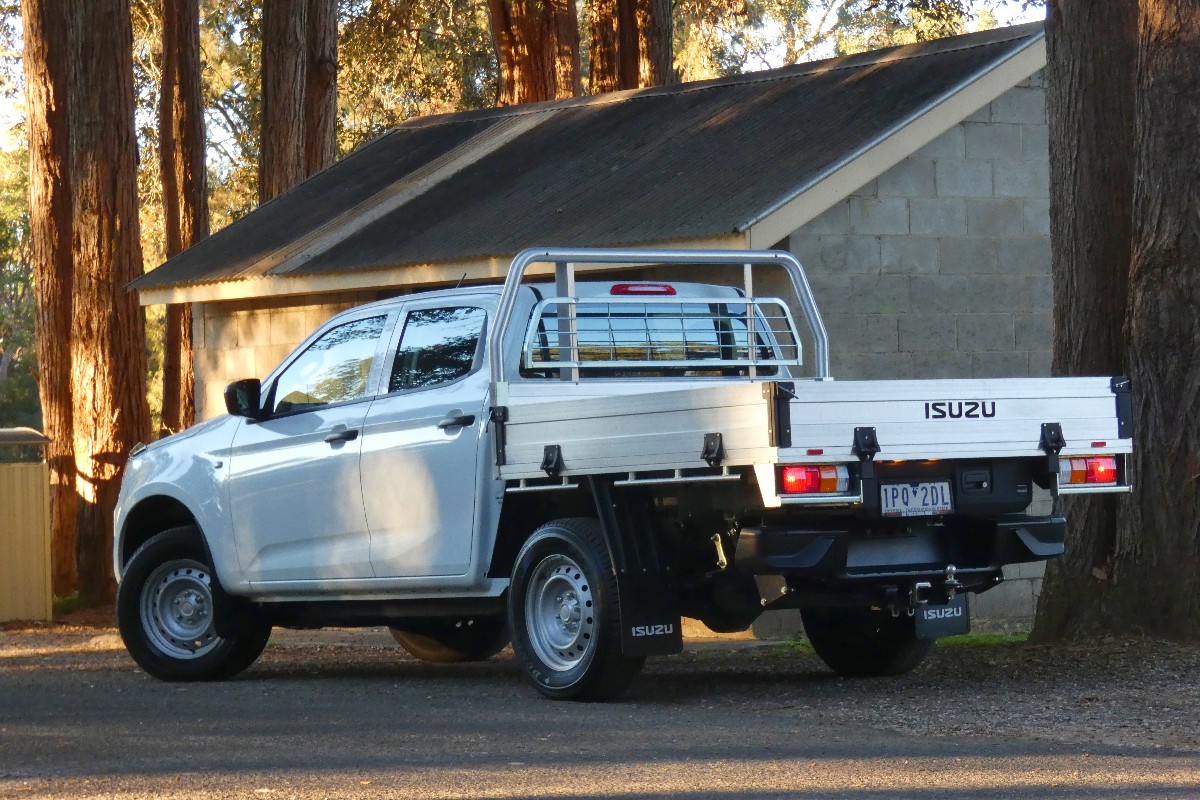 SX is priced from $29,990 driveaway with a six-speed manual and factory fitted alloy tray.

That’s very much a price point designed to get punters through the door, evidenced by the fact it survived a recent price rise across the range.

SX is the entry level grade and targeted at the trades, with its rubber mats, vinyl floor covering and a no frills cabin.

But there is a big, impressive looking infotainment unit that looks somewhat out of place in this scenario — but we’ll get to this in a minute.

At the business end of the vehicle, which is after all why you buy these things, single cab offers a 2550mm long tray, while the tray in crew cab is 1800mm — three quarters of a metre shorter.

That in itself could be a deal breaker, but so too could a back seat and the child car seat tethers that come with it if you’re called on to pick up the kids.

Apart from the bits and bobs that go with four-wheel drive and the fact crew cab weighs 160kg more, there are some other minor differences.

You also get some much-needed space to stash stuff, mainly in the back and even under the back seats which flip up.

Try doing the shopping with two people in the single cab and you’ll soon discover there’s bugger all room to put anything.

The safety story is a strong one, with eight airbags and a raft of electronic aids even at this end of the range.

D-Max is one of a handful of vehicles to introduce an additional centre airbag across the entire range.

Mounted on the inner-side of the driver’s seat, it’s designed to protect front occupants from bumping heads in a severe impact.

Isuzu is also among the first to introduce Autonomous Emergency Braking (AEB) with Turn Assist, with the system able to autonomously brake at intersections to avoid driving into the path of an oncoming vehicle. 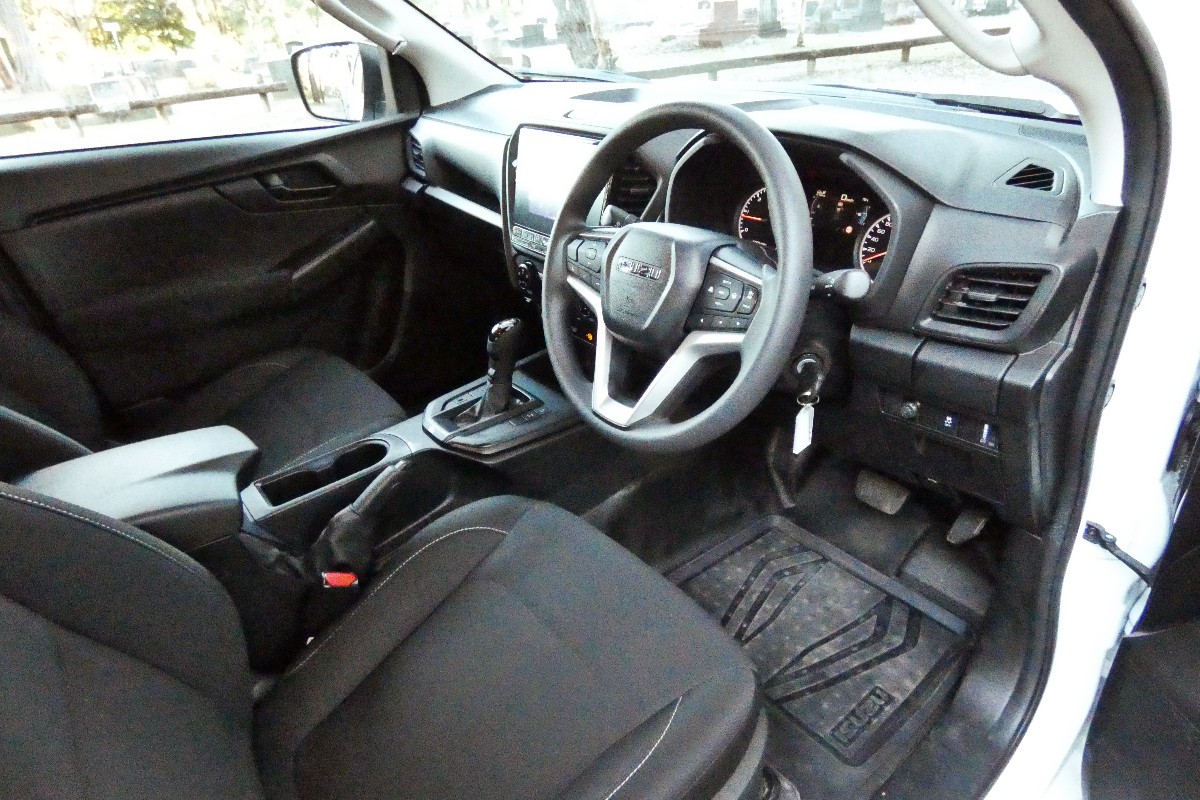 D-Max is powered by a 3.0-litre turbo diesel, together with a six-speed manual or automatic.

This one also has dual range 4×4, in other words fair dinkum four-wheel drive.

With less noise and vibration, it’s much quieter, smoother and stronger than before, and thankfully sounds less like a truck.

After driving the 4×2 single cab, we thought the 4×4 crew cab was going to be pretty much the same.

Wrong. The 4×4 crew cab is actually quite different to drive, helped by the extra weight which makes it rider a little better.

The 4×4 system is a part-time one, allowing the driver to switch between 2WD-high and 4WD-high modes at speeds of up to 100km/h.

4WD-low will will get you out of trouble when the going gets tough, with Hill Start Assist (HSA) to prevents roll-back and Hill Descent Control (HDC) for brake-free descents in rough downhill terrain.

But in the work context, it should be viewed more as a tool rather than recreational option.

At more than 5.3 metres and with a turning circle of 12.5 metres, it can be a handful to reverse park and navigate cramped carparks.

Although it has a reverse camera, it doesn’t provide guidelines which reduces its usefulness and there are no rear park sensors.

With 17-inch steel wheels, the 4×4 sits 10mm taller, but has the same 235mm of ground clearance, with gas shocks and heavy duty rear leaf springs.

Ride quality is hard, jolting and truck-like, but a little less so thanks to the extra weight in the back.

This heavy duty tray incorporates a rear-window grille, with a top rail that is rated at 150kg.

Crew cab can also tow a 3500kg load, with a maximum towball rating of 350kg and has trailer sway control.

The large touchscreen is impressive, but in this model the actual viewing area is not 9.0 but 7.0 inches and it is not terribly responsive.

Traffic sign recognition keeps you posted about the current speed limit, but the touchscreen does not incorporate navigation.

So, if you need to look up an address, you’ll need to hook up your phone.

Android Auto promises much but never quite manages to deliver.

Can’t comment on Airplay because we don’t have an iPhone — but at least it connects wirelessly.

DAB+ digital radio is present, but reception tends to be patchy.

D-Max is covered by a 6-year/150,000km warranty, with 7-year roadside assistance and 7-year capped price servicing. 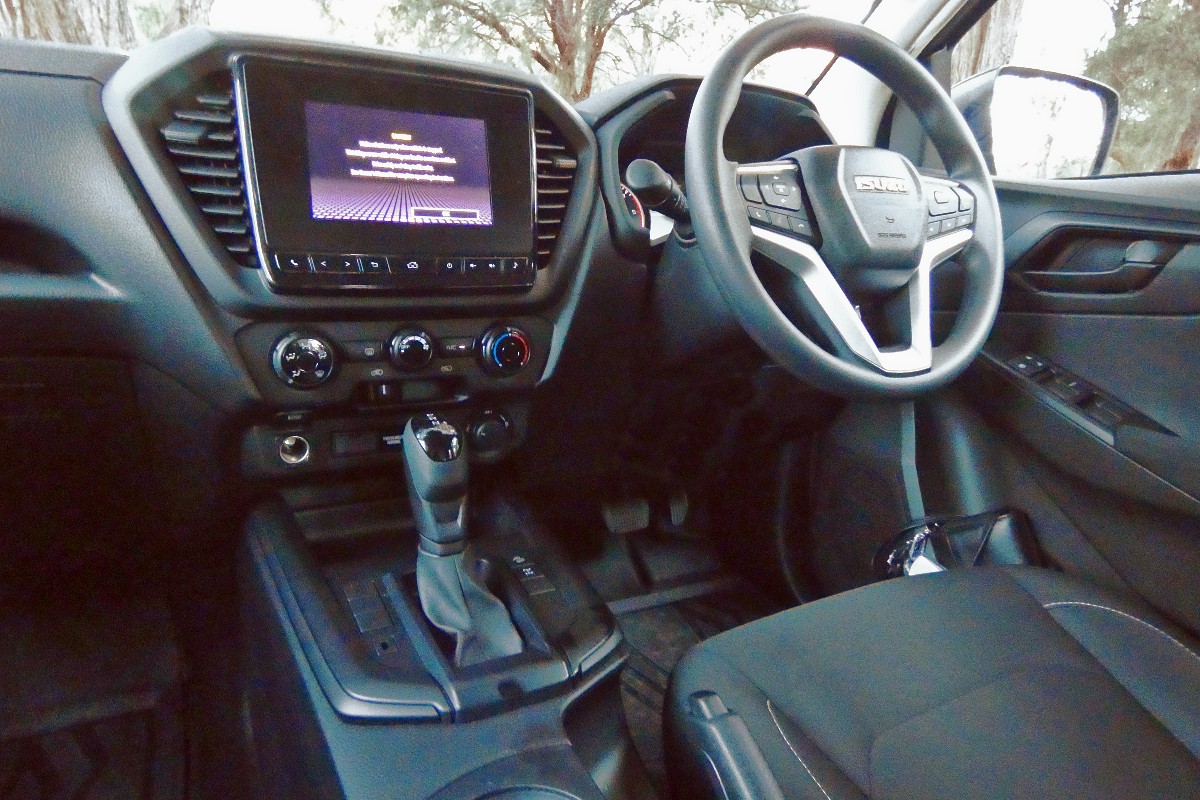 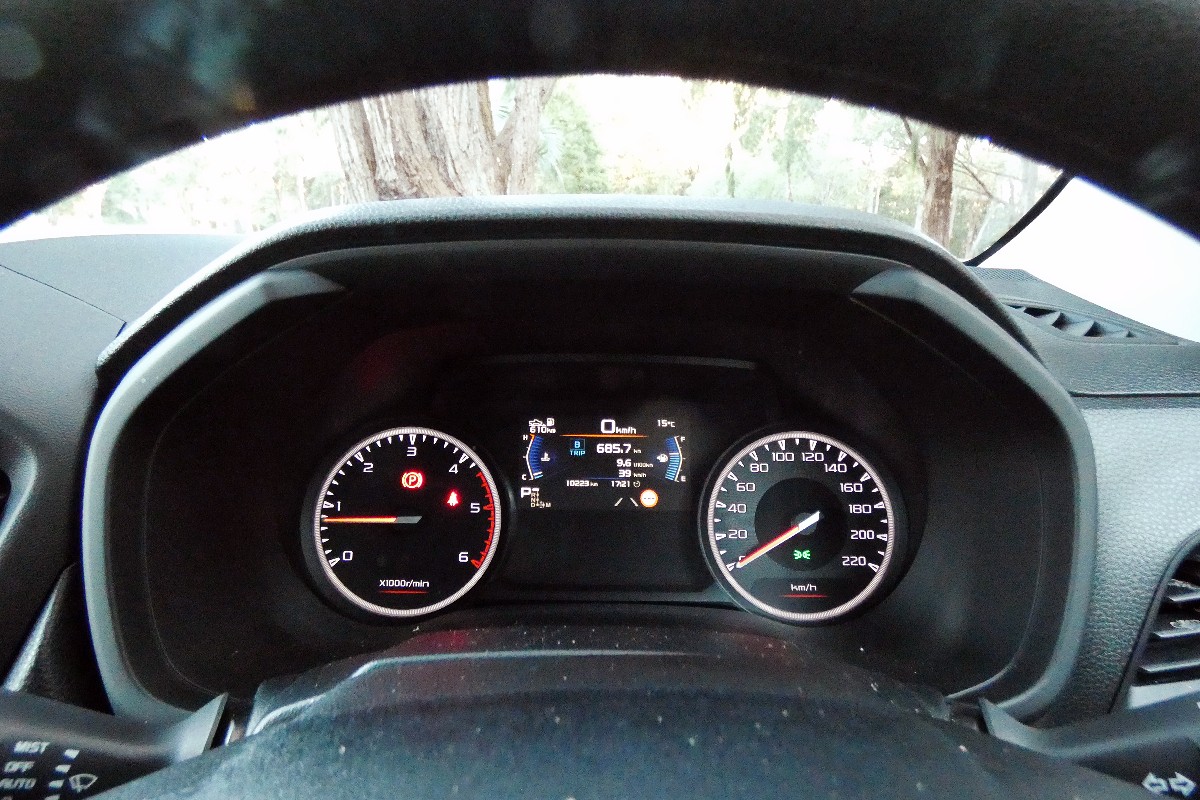 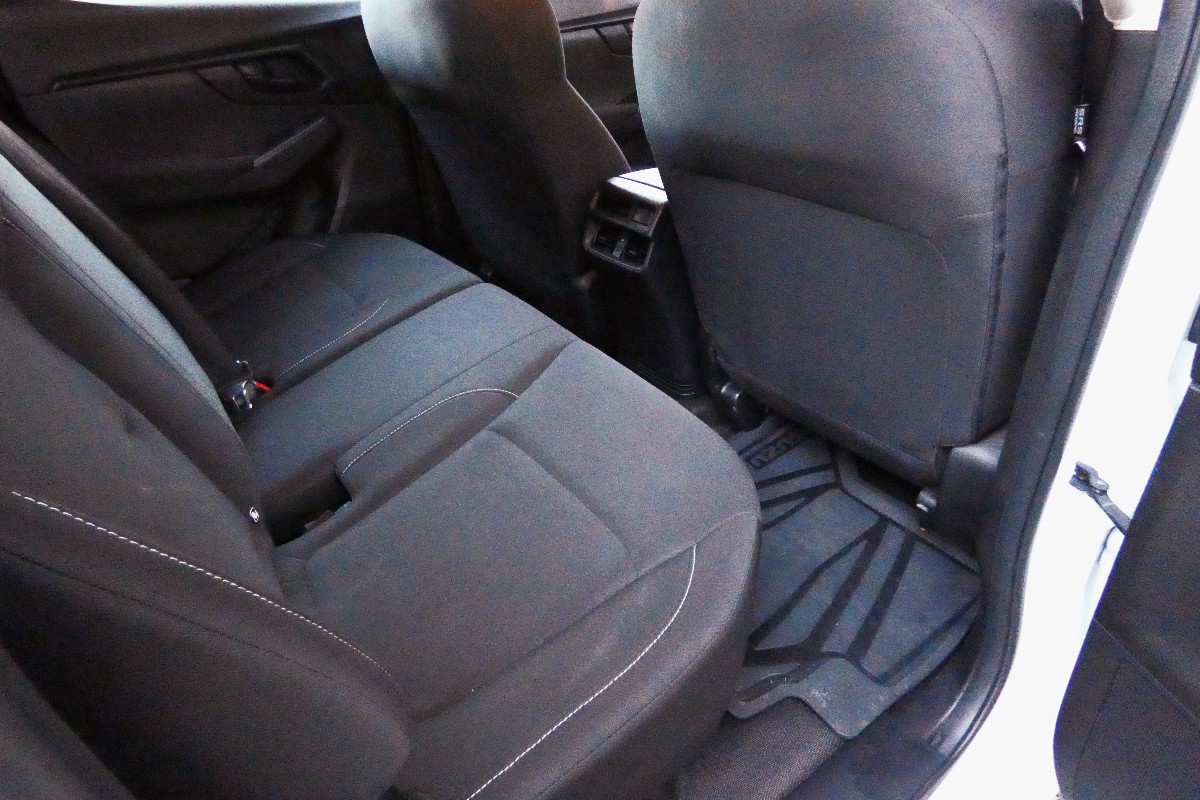 D-Max has built a solid reputation and it is starting to pay dividends.

Although there’s nothing fancy about the SX, it does tick most of the boxes, including the important one for safety.

But, the Chinese now have a firm foothold in the ute market and Isuzu needs to keep a weather eye on prices — or it might cease to be the go to option for a good deal. 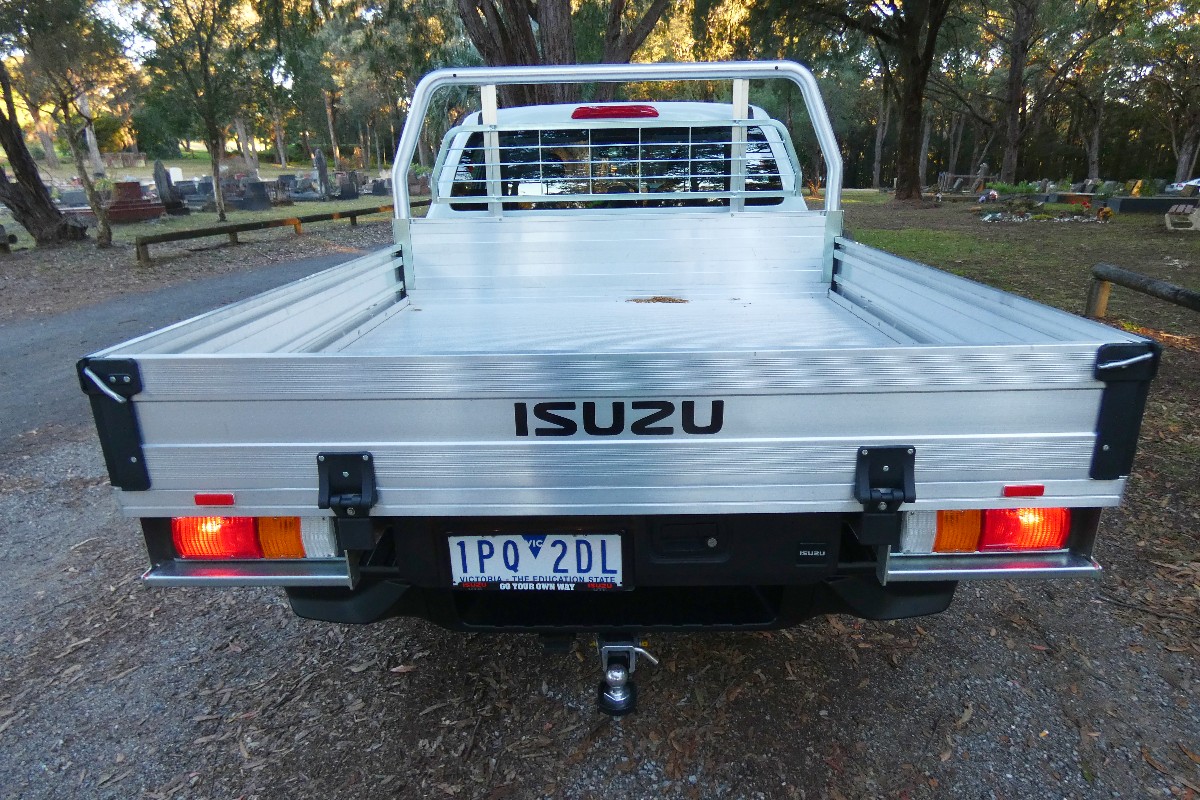 Check out deals on the Isuzu D-Max