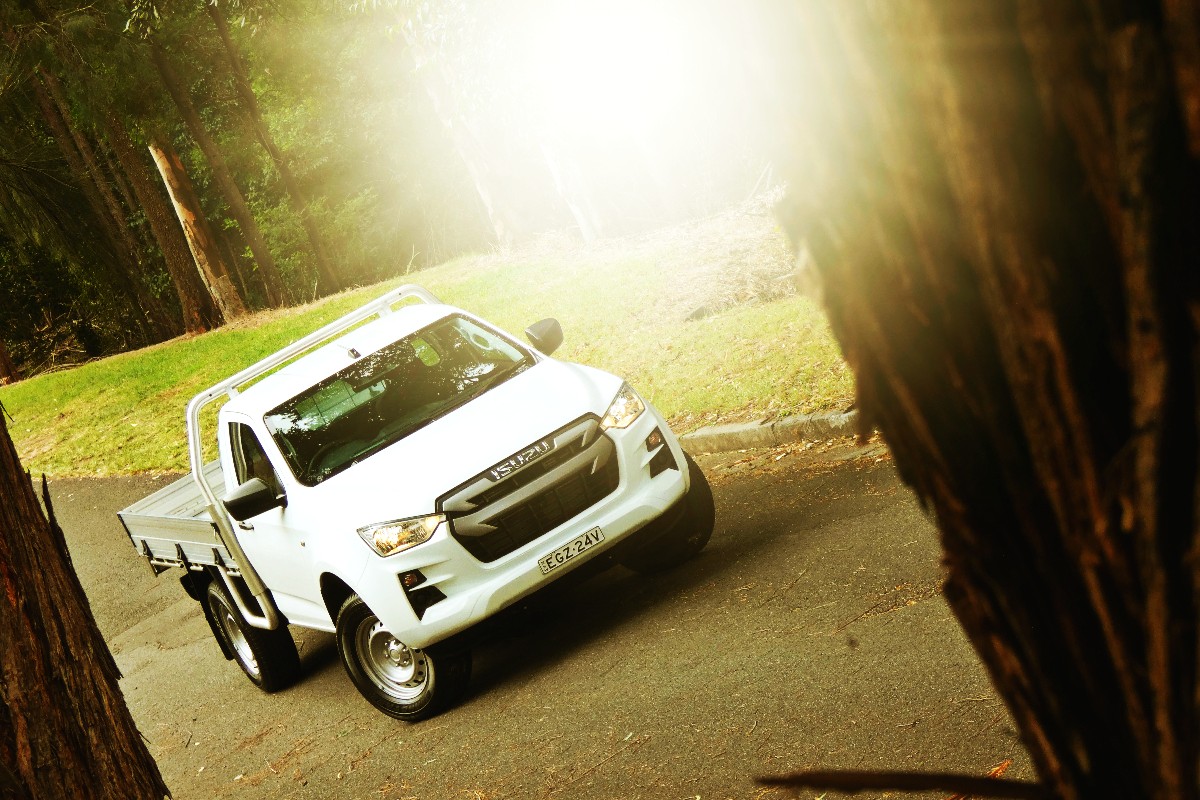 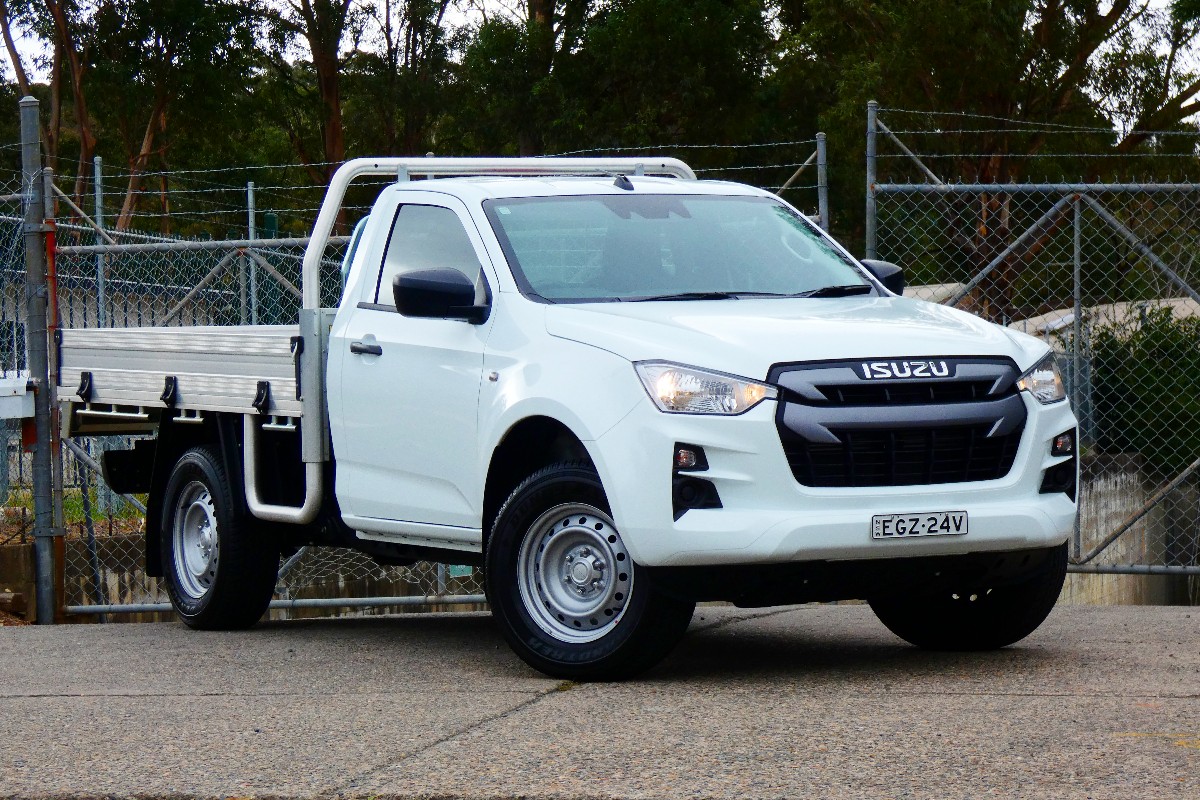 The motoring landscape continues to evolve and with it the humble ute.

A quick look at the sales figures for last month show utes held down four, yes four — of the top 10 spots in Australia.

Nothing new in that, with the Toyota Hilux and Ford Ranger still going at it in first and second placer, but spare a thought for Isuzu whose D-Max utility nailed the number five spot in May — ahead of Mazda’s all-conquering Cx-5.

The Corolla (let’s not forget the Corolla), just made it into the ninth spot.

The champagne corks must be popping over at Isuzu’s headquarters at Cannon Hill in Queensland, where the company has been quietly going about business since 2008 with two solid but unexciting offerings — first with the D-Max and later with the 7-seat MU-X  which was added in 2013.

D-Max is all new while an all-new MU-X is coming soon. 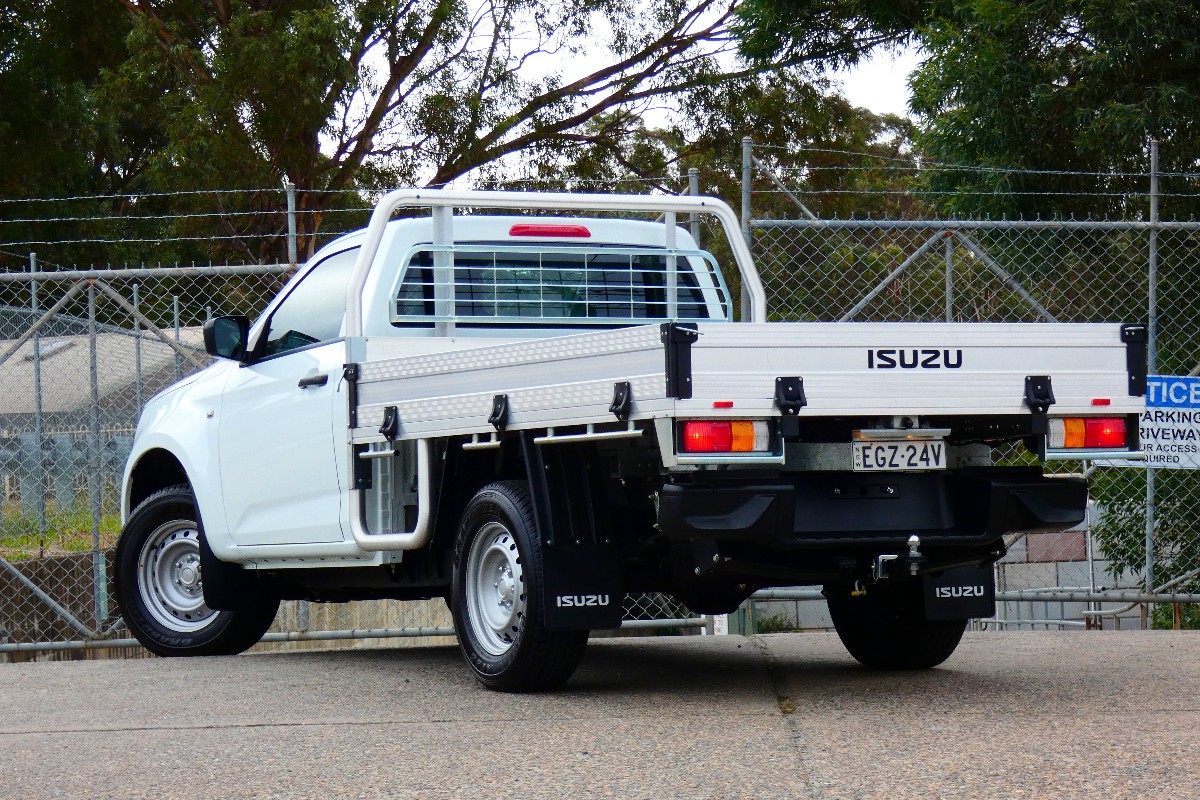 SX is the entry level offering and earmarked for work, with rubber mats, vinyl floor covering and a rather spartan cabin — apart from the large infotainment screen (more on that in a bit).

SX is priced from $29,990 driveaway with a six-speed manual and that includes a large, factory fitted alloy tray with drop sides.

All fairly standard fare, but the safety story is a strong one, across the board and bears some closer scrutiny.

D-Max is the first ute and one of a small handful of vehicles to introduce an additional centre airbag across the entire range.

Mounted within the inner-side of the driver’s seat, it’s designed to protect both front occupants from colliding with each other during a severe impact.

Isuzu is also among the first to introduce Autonomous Emergency Braking (AEB) with Turn Assist, with the system able to autonomously brake at intersections to avoid driving into the path of an oncoming vehicle. 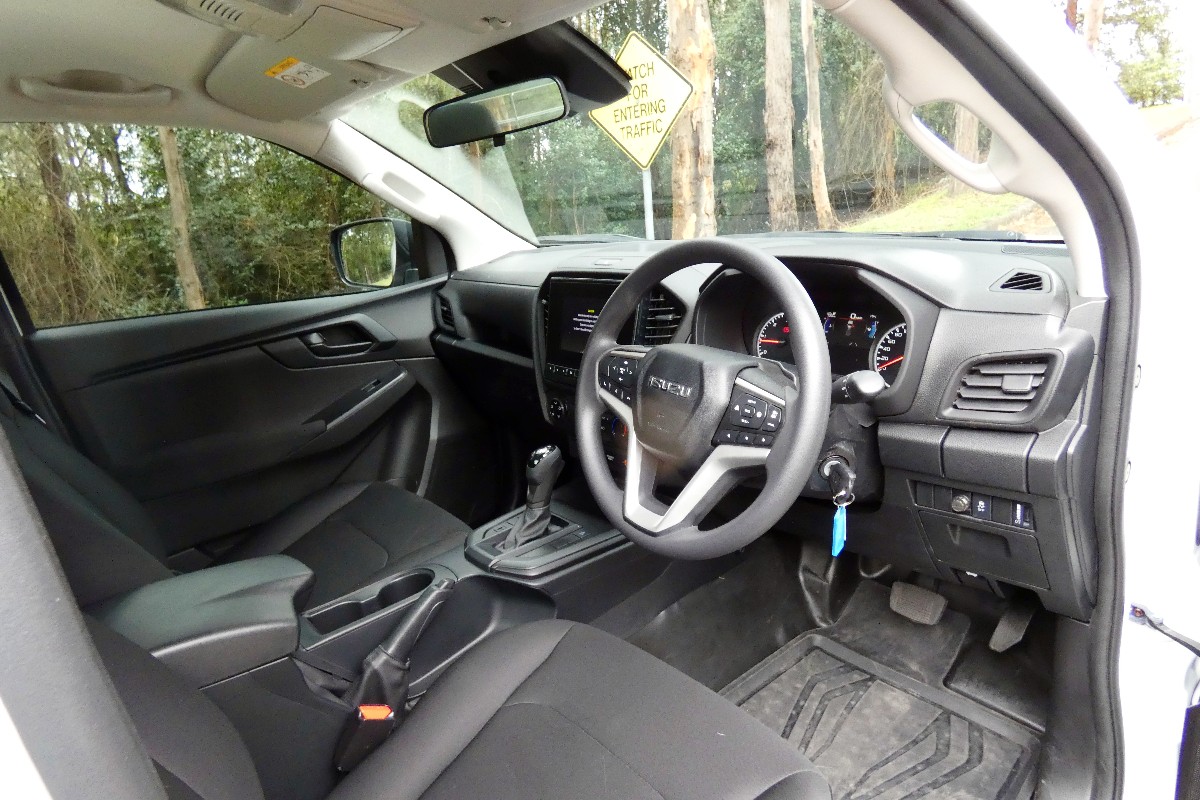 Like the last one, this D-Max is powered by a 3.0-litre turbo diesel.

It’s the same engine, but has been rejigged on the basis of local feedback, Isuzu says.

With less noise and vibration, it all adds up to an engine that is much quieter, smoother and stronger, not to mention sounding less like a truck.

Tradies will love it because it goes like a rocket (and we all know how they always seem to be in a hurry).

It’s long at more than 5.3 metres and has a turning circle of 12.5 metres, which makes it a handful in car parks.

And although it has a reverse camera, it doesn’t provide guidelines which reduces its usefulness.

It has to be, otherwise it will be bouncing off its suspension bump stops with a full load on the back.

If you happen to be sitting in the passenger seat, you’re likely to be thrown around by unexpected jolts and with someone n the seat next to you, there’s not much room to put anything.

This heavy duty tray incorporates a rear-window grille, with a top rail that is rated at 150kg.

It can also tow a 3500kg load, with a maximum towball rating of 350kg and has trailer sway control.

The large touchscreen looks impressive, but the actual viewing area is masked off at 7.0 inches and is not particularly responsive – it could do with a physical volume control too.

Android Auto refused to connect, or at least stay connected for more than a few seconds, and so we were left without navigation. Apple uses gets wireless CarPlay.

Digital radio reception is terrible. Hint extend the rooftop antenna. Better but still not the best.

D-Max is covered by a 6-year/150,000km warranty, with 7-year roadside assistance and 7-year capped price servicing. 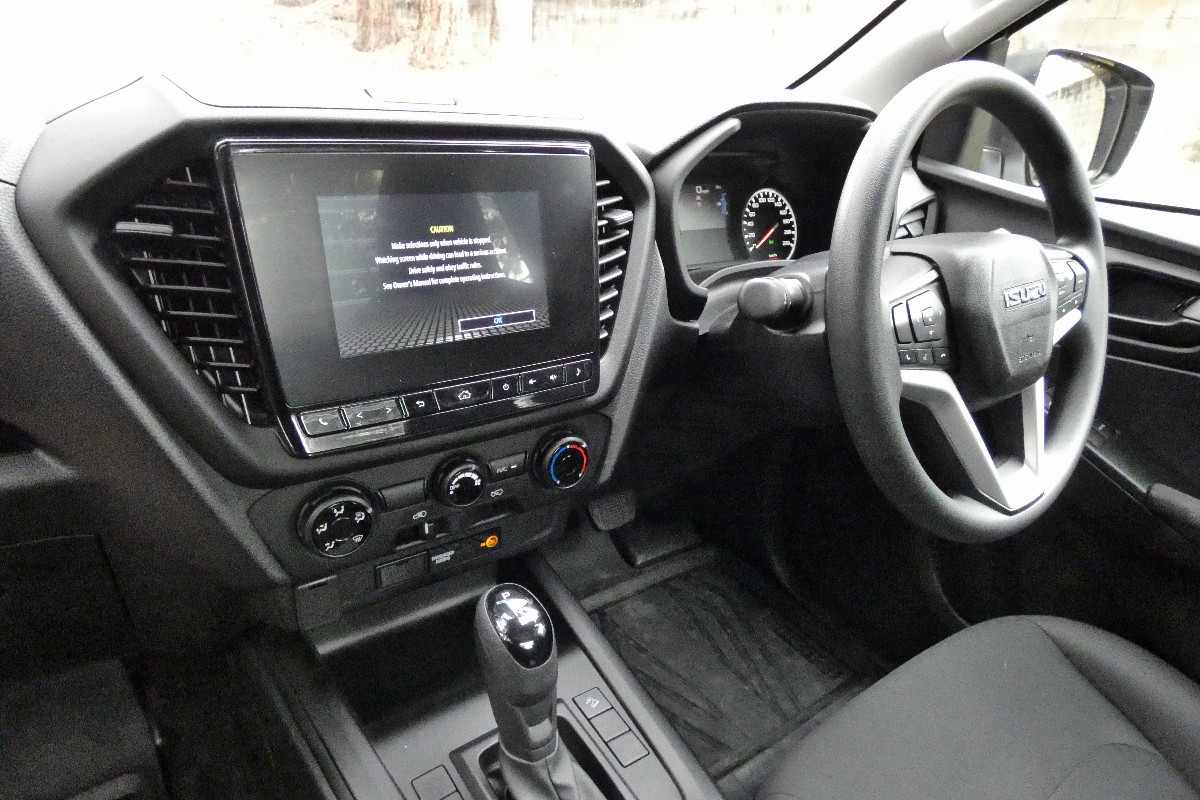 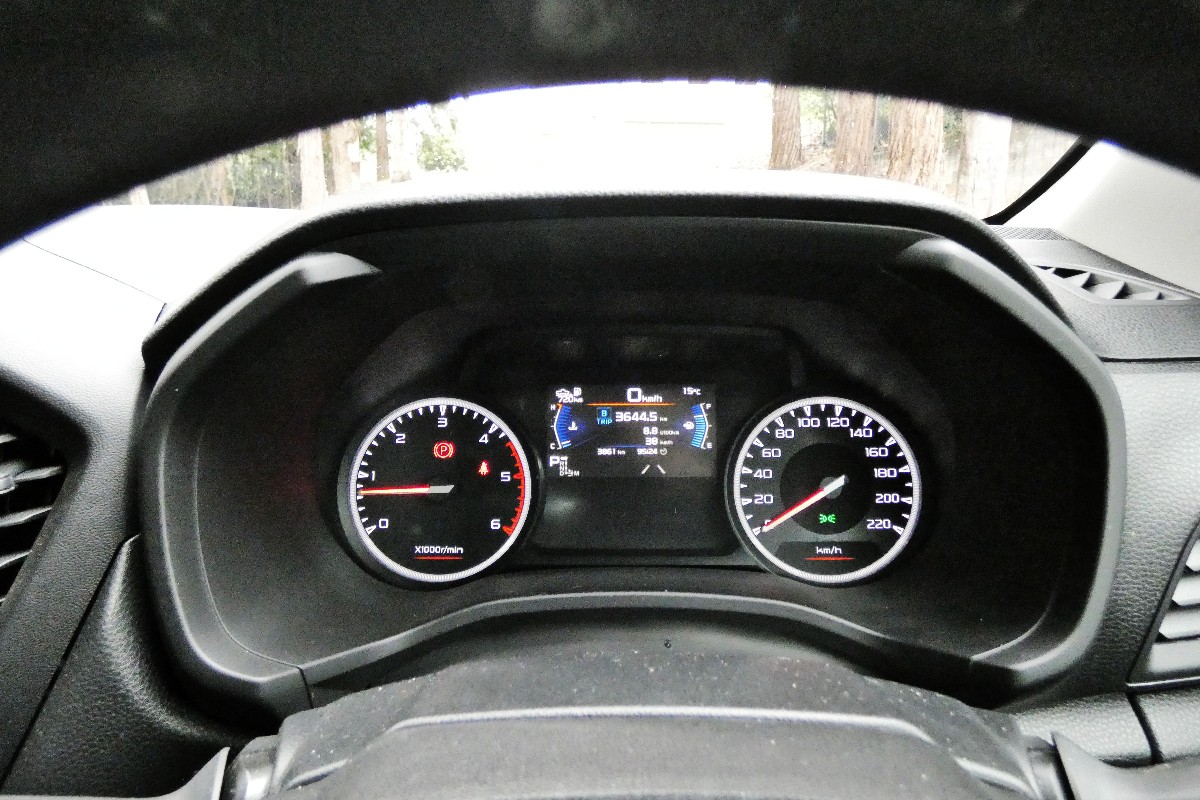 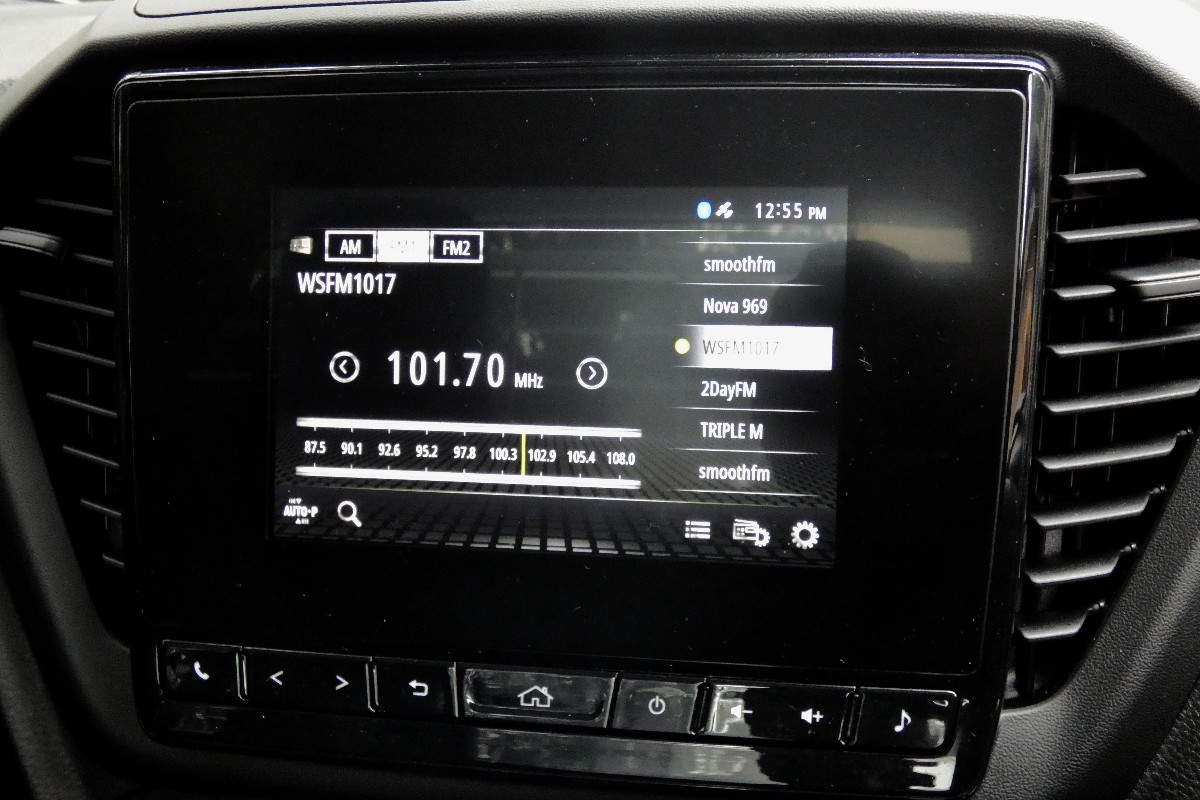 There’s nothing flashy about the D-max, but then there doesn’t have to be.Is

Isuzu has been refining -Max since its launch 13 years ago and it looks like those chickens are finally coming home to roost.

At $29,990 driveaway (with a tray) the SX is outstanding value, especially given the high level of safety that it offers. Ford and Toyota need to spend less time worrying about each other and keep an eye on the rear vision mirror.

CHECKOUT: Isuzu D-Max: Two for one

Check out deals on the Isuzu D-Max