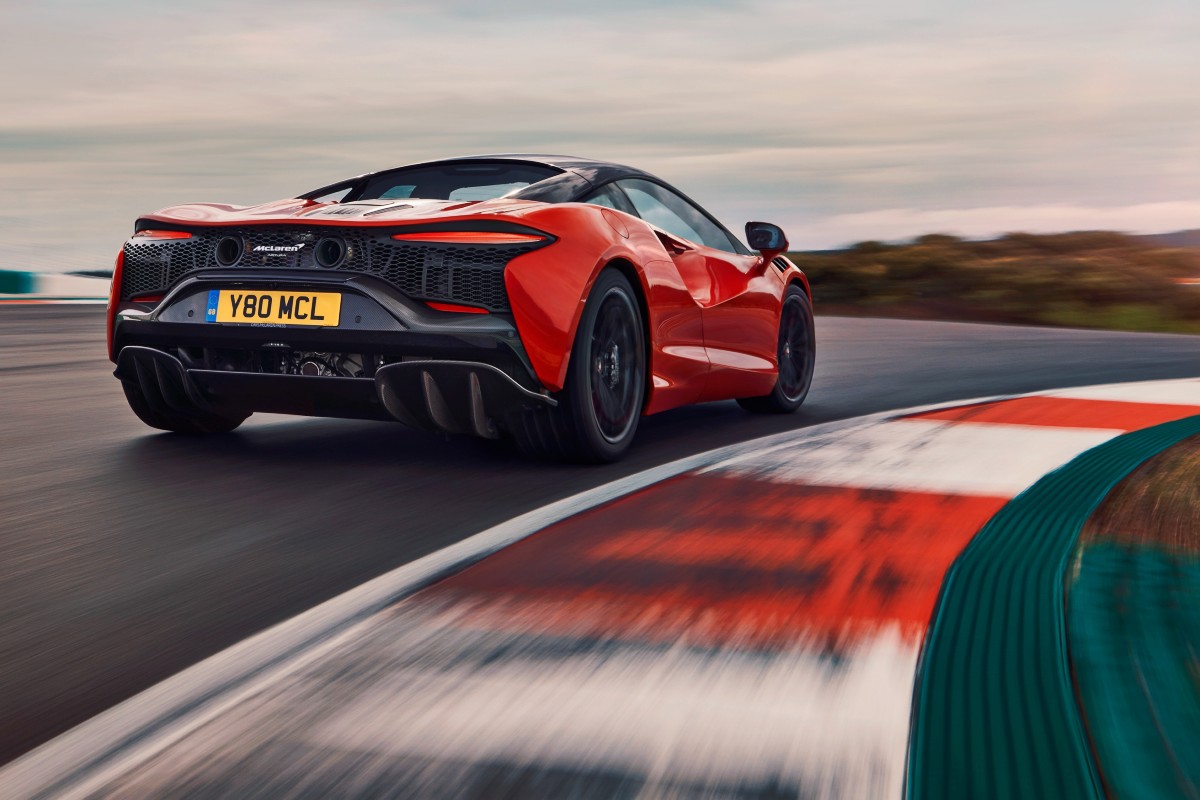 Home
Wheel life
Hi-tech McLaren like something from Star Trek

EVER heard of an Axial Flux E-motor?

It’s one of many new features of McLaren’s latest supercar, the Artura — which you can order now and get it before Christmas.

“With Artura, we started with a clean sheet,” McLaren says.

“The McLaren Carbon Fibre Lightweight Architecture (MCLA) at its core is all-new. As is the High-Performance Hybrid powertrain.

“Our relentless pursuit of lightness reaches another level. Aerodynamic efficiency is more advanced than ever. Helping to shape a minimal, beautiful new design.

“From the rear suspension to the advanced E-differential, every new element contributes to a uniquely intense driving experience.”

Well,  the radical new McLaren has been totally re-imagined, from its carbon tub, to its engine, its hybrid transmission’s electric motor, and even its name — now (hooray) without a number.

Also, unlike most supercars, its price is not astronomical: around $330,000 Australian.

It is cast using 3D-printed cores for optimal block cooling — as in Formula 1.

Special attention has been paid to its acoustics, which are augmented by piping actual engine sounds into the cabin with no stereophonic nonsense.

McLaren is an early adopter of a new type of electric motor that arranges its permanent-magnet poles parallel to the axis of rotation (hence, axial flux).

It’s a more compact design that packs a far greater wallop per size and weight than radial flux motors can.

It’s mounted between the engine and transmission with a clutch that can disconnect the engine, allowing the 7.4-kWh lithium-ion battery and electric motor to propel the Artura for up to 35km at up to 120km/h.

That brings the total weight of the Artura’s hybrid gear to 130kg, including associated hardware such as wiring and controllers.

Altogether, this powertrain is rated to produce 500kW and 720Nm of torque in the Artura. (To save you Googling, the GT, which slots below the Artura, makes 456kW and 630Nm, while the 720S that’s above it is rated at 529kW and 720Nm on petrol alone.

For the cogbox, McLaren’s proven seven-speeder makes way for a smaller, lighter, eight-speed box that requires no reverse gear, as reversing is completely electric.

Also new is the incorporation of an electronically-controlled limited-slip rear differential.

The tub is of carbon-fibre, stronger, safer, and lighter than those of its predecessors.

All have embedded Cyber Tyre chips that report which type is fitted, plus instant pressure and temperature info, all of which inform the traction and stability control systems.

The Artura also has a Variable Drift Control function, so after a racing or track day session, you can review your heroics via an updated version of the McLaren Track Telemetry system (MTT).

The car has three drive modes: E-mode, which  keeps the engine switched off as much as possible, Comfort mode for optimal driving range and efficiency, and Sport and Track modes which optimise low-end response, using electric power for torque as turbos spool while maximising battery state of charge whenever full power is not being called for — just as in Formula E race cars.

McLaren says the Artura will be the first production car to use a twisted pair ethernet data transmission network to connect the numerous electronic control units that oversee various body, chassis, and powertrain electronics.

The system is credited with reducing copper wiring by 25 percent and overall system weight by 10 percent.

The instrument binnacle  moves with the steering wheel and incorporates toggle switches around the edges where they can be easily reached to control the various powertrain, handling, and stability modes.

And can you imagine the one up-personship of going for drinkies at the E-Club and asking your mate if his Leaf has an Axial Flux E-motor?