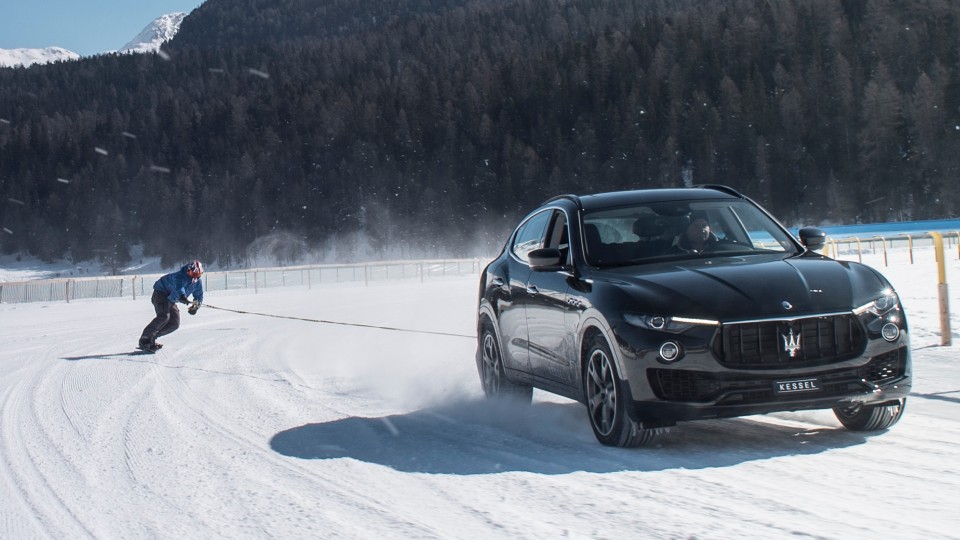 Thrillseeker Jamie Barrow has smashed his own Guinness World Record as the fastest snowboarder in the world.

Barrow, 25, once a member of the British snowboard team, achieved the feat at the end of a rope behind a Maserati Levante on a frozen lake in Switzerland.

He was clocked at 151.57 km/h at the Swiss alpine resort of St Moritz.

Barrow previously broke the same record in February 2016, when he clocked 99.87 km/h while being towed behind a car across the same lake.

This time he returned to the lake with the powerful Maserati Levante S, a much faster car than the one used in his last record attempt, fitted with Pirelli Scorpion Winter tyres.

The special metal studded tyres have 474 studs per tyre and are 4mm long to allow the best grip possible on the frozen lake.

Strict criteria had to be met for the record to meet Guinness World Record guidelines.

These included completing a timed run in both directions with specialist recording equipment, set at 100 metres by a Guinness World Records official.

With 400 metres needed either side so that the Maserati Levante could accelerate and slow down safely on the snow, a total run of about 900 metres was prepared.

Due to the Guinness World Record stipulations, a return run back was recorded at 147.72 km/h.

The two runs were then averaged to give the final Guinness World Record speed of 149.65 km/h.

In 2013 a serious accident during a snowboard cross competition forced Barrow to drop out of the British team with a bad back injury.

“Despite doctors telling me I had to give up snowboarding I was determined to not only snowboard again but to push myself as far as i could,” he said.

“This is when I decided to start doing speed records.”

“The challenge of my life is to find out how far I can take it,”  he said.

Barrow is also famous for his viral internet videos, one showing him being towed by a plane — another with a jet-powered backpack.